Expired News - Visualizing what Harvey's impacts would look like in Canada - The Weather Network
We use cookies on this site to improve your experience as explained in our Cookie Policy. You can reject cookies by changing your browser settings.   READ MORE I ACCEPT

Visualizing what Harvey's impacts would look like in Canada

Monday, August 28, 2017, 8:48 PM - The flooding in Texas from Hurricane Harvey and its remnant has reached disastrous levels in some areas, due to a combination of storm surge and days of rainfall. Here's what its effects would look like for Canadian cities.

Now let's try to visualize what the 'historic devastation' experienced in Texas might look like in some select Canadian cities which have previously experienced significant multi-day rain events.

Hurricane Harvey, although now downgraded to a Tropical Storm as it slowly works its way back out over the Gulf of Mexico, has already dumped unprecedented amounts of rainfall over the Texas Gulf Coast. Some regions have seen over 1000 mm (nearly 40 inches) of rain fall so far, and this could reach 1,270 mm (50 inches), or possibly more, before the end of the week.

Coupled with the storm surge that Harvey's winds and low pressure pushed up on shore, this has resulted in flood waters that have submerged homes and streets, with some intersections flooded all the way up to the traffic lights.

Setting aside the storm surge, and just taking the rainfall from Harvey, what kind of impacts would this have on Canadian cities?

In thinking over this question, two memorable Canadian rainfall events come to mind.

On June 18-19, 2013, over 200 mm of rain fell over southern Alberta in less than two days, and the town of Canmore, in the mountains to the northwest of Calgary, saw 230 mm of rain in 36 hours. That much water added to southern Alberta's waterways, at such a pace, resulted in catastrophic flooding for many communities, including Calgary.

A few weeks later, on July 8, 2013, 126 mm of rain fell over Toronto Pearson Airport during three hours of thunderstorms, including 90 mm over the downtown core. Streets were turned into flowing rivers, subways were flooded and many motorists and commuters were stranded as transportation ground to a halt.

By comparison, however, the situation with Hurricane Harvey is far worse, even if you don't take the storm surge into consideration.

Over roughly three days, around 1000 mm of rain have fallen over Houston, TX.

That's over triple the two-day amount of rainfall that sparked the Calgary floods, plus with an extra day at that same rainfall rate tacked on for good measure. The June 2013 floods were bad enough. With four to five times that amount of water coursing through southern Alberta's streams and rivers, it's hard to imagine just how bad it could have been.

The Toronto flood was set off by rainfall rates of 30-40 mm per hour, over just 3 hours, but from all indications, Hurricane Harvey slammed Houston with that amount of rain repeatedly, as the intense storm bands swept over the city.

According to Mashable, WeatherBell meteorologist Ryan Maue said that by the time Harvey moves on, Texas will have had a total of 21 trillion gallons of water fall on it from the storm, and 15 trillion gallons have fallen already. That's the equivalent of 56.8 trillion litres, or 56.8 cubic kilometres of water.

Dump that much water over Canada's largest city, all in one go, and it would produce a flood roughly 90 metres deep across the entire Greater Toronto Area. 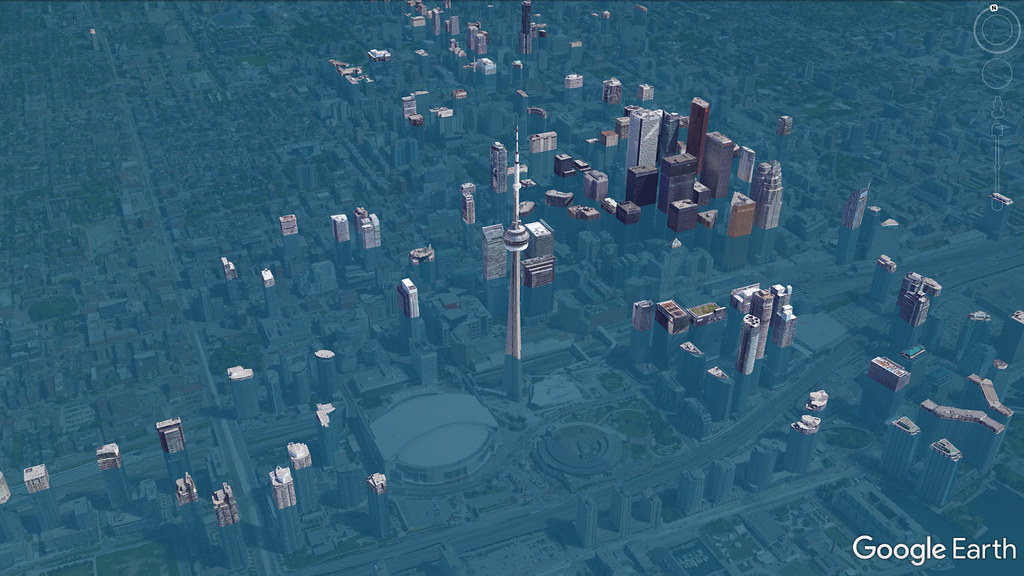 A Google Earth simulation of a 90 meter flood in the GTA. Credit: Google/Scott Sutherland

Do the same with Montreal, and you'd have a layer of water 131 meters deep (since the city is smaller than the GTA, more of the volume gets piled up). 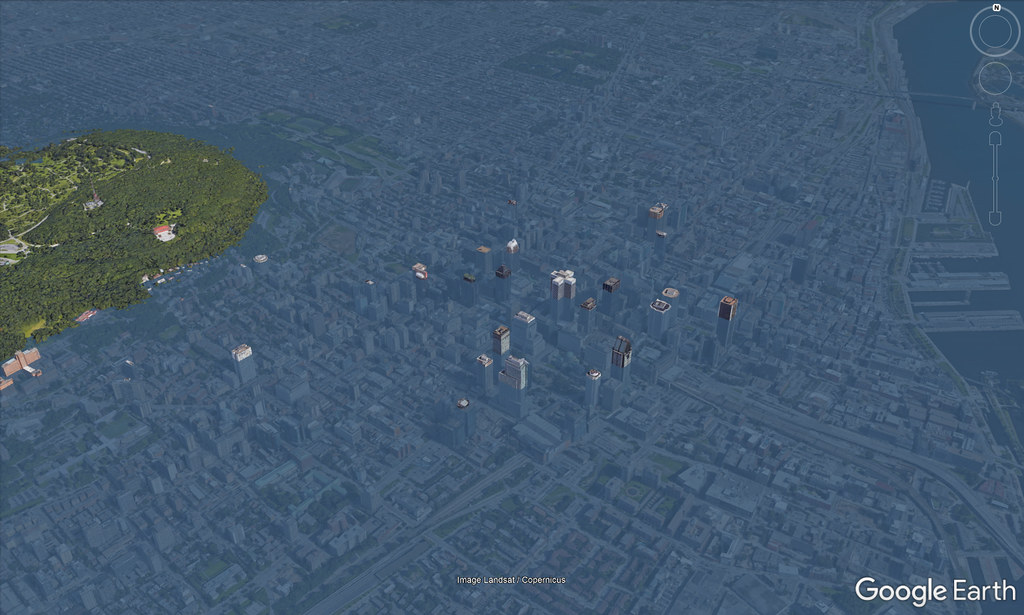 A Google Earth simulation of a 131 meter flood over Montreal. Credit: Google/Scott Sutherland

These are extreme simulations, simply demonstrating the total amount of water that has fallen over Texas from Harvey. Fortunately, rain doesn't all drop at once, so with it coming down down over a few days, as we've seen since Harvey's storm bands first started to impact the state, the effects wouldn't be quite as dramatic.

The longer time frame would allow water to seep into the ground, and runoff to pour into local waterways, like Lake Ontario for Toronto, or Lake Saint-Louis and the St Lawrence River for Montreal, but such an event would still result in extensive flooding, especially low-lying regions of the city. The problem comes from intense rainfall in those low-lying regions combining with the immense amount of water draining from areas of higher elevation. This scenario can easily overload the city's system of storm drains.

We saw this in Toronto, in July of 2013, when streets flooded over a wide swath of the downtown area, and the Don River crested its banks, putting the southern end of the Don Valley Parkway under a few feet of water. If a storm surge like Harvey's were possible in Toronto, it would result flooded streets, subways, basements and parking garages, as well as water covering at least the first story or two of most downtown buildings, at the very least.

Storm surge is certainly an issue on Canada's west and east coasts. The west coast may see an occasional tropical cyclone remnant swing around, still packing hurricane force gusts and heavy rainfall, but it's the east coast that is truly vulnerable to storms like Harvey. The worst storm surge seen in Halifax was from 2003's Hurricane Juan, which delivered a surge of between 1.5-2 metres (5 and 7 feet) to Halifax Harbour. The storm surge from Harvey has been estimated at over 3.5 m (around 12 feet). Houston is very flat, compared to Halifax, so the damage of such a surge would be more localized around the harbour and shoreline, but add another metre of water from rainfall and the effects would become more widespread.

Downtown Halifax under a couple of metres of water, via Google Streetview and "World Under Water".

A similar storm surge pushing into Vancouver, however unlikely, would produce similar results.

Downtown Vancouver under a couple of metres of water, via Google Streetview and "World Under Water".

Now, the chances are pretty slim that we'll ever see a Category 4 Hurricane push onshore in Canada, let along one that stalls and lingers in place for days, as Harvey has done along the Texas Gulf Coast. First off, Harvey's situation is rather unusual, with such a strong storm ramping up so quickly over very warm Gulf waters, to make landfall just as it was reaching peak strength. For storms that reach Canada, most are post-tropical remnants, or significantly weakened hurricanes or tropical storms, due to passing over cooler waters farther north, or making landfall in the United States and thus expended much of their energy in the progress.

Second, as it was making landfall, Harvey ran up against two domes of high-pressure to the north and northeast. With these high pressure cells in place, the scenario was akin to rolling a rock towards a hill. It might have enough momentum to at least start up the slope, but eventually the rock slows, stops and reverses back down the incline. The same thing happened with Harvey, and it's now "rolling" back out over the Gulf of Mexico. Storms that impact Canada are usually ones that sweep past or through the Atlantic provinces, and as they're caught in the wind flow northward, there's very little in the way to halt their progress. One exceptional case was Hurricane Sandy, which was diverted on-shore by a strong ridge of high pressure over Greenland.

Right now, even as Harvey heads back out into the Gulf, potentially re-intensifying before impacting the coast further east, meteorologists are tracking another system, which is moving up the east coast.

Sources: Mashable | With files from The Weather Network

Watch Below: Impact likely for part of Canada from NEW tropical system