Expired News - Real reason why mosquitoes BITE YOU over others - The Weather Network
We use cookies on this site to improve your experience as explained in our Cookie Policy. You can reject cookies by changing your browser settings.   READ MORE I ACCEPT

Real reason why mosquitoes BITE YOU over others

Monday, August 20, 2018, 12:09 PM - Surprisingly few of the more than 3,000 mosquito species actually specialise in biting humans. Instead, most are opportunistic feeders – feeding when they are able and from lots of different sources. But Aedes aegypti and Anopheles gambiae are well known for their preference for human blood and their role as vectors which transmit disease in humans. Ae. aegypti has been linked to zika  and dengue, while An. gambiae carries the parasite which causes malaria.

Not only do certain mosquito species show very strong preferences for obtaining their blood meals from humans, they also appear to discriminate between people when choosing their next meal. Personally, I’m lucky – I don’t tend to get bitten much. I’ve shared rooms with people who end up covered in bites while I escape with only a nibble or two. I’m sure you’ve noticed something similar, whichever side of the arrangement you might fall.

Although this is only an anecdote, it is backed up by research. So why is it happening? What factors might influence the mosquito’s choice?

There are many old wives’ tales on the matter, some more plausible than others. Some think that blood type, having fair skin, being sweaty and even eating foods with garlic or apple cider vinegar can influence biting rates one way or the other. There are plenty of these anecdotes and for the most part they don’t appear to have much influence when scientifically tested. But a great deal of research effort is spent on understanding mosquito feeding choices, primarily in the hope of manipulating their behaviour to control disease in humans.

SEE ALSO: Allergic to ragweed? Here's how the season is shaping up 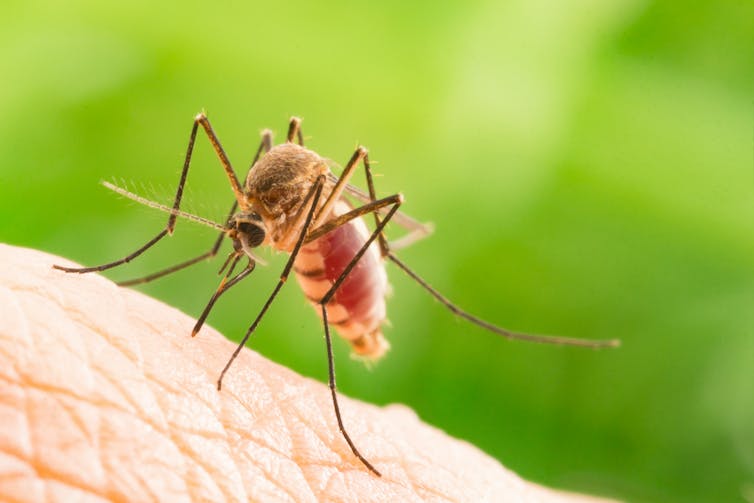 Only female mosquitoes bite, and only then when they’re ovulating. Shutterstock

All mosquito species use carbon dioxide as a long-range indicator that a host is nearby. However, CO₂ is ubiquitous and provides little information to help a specialist mosquito identify its preferred target. Lactic acid has been demonstrated to be a significant attractant alongside CO₂ and is much more prevalent in human odour than in other animals. Other compounds such as ammonia, some carboxylic acids, acetone and sulcatone also help complement this human bouquet.

Of course, this doesn’t tell us why my companions are generally bitten more than me, it just explains why humans end up as a mosquito’s meal and not a bird, cow or lizard. The best evidence for what motivates a mosquito’s choice between different people is the variation in our skin microbiota.

This microbiota is mostly non-pathogenic bacteria and fungi which live on our skin and in pores and hair follicles. The odour combination they emit in the form of volatile organic compounds is the critical factor in telling mosquitoes how tasty we’d be.

Our skin microbiota is not readily passed between people through contact. We have an estimated 1m bacteria per square cm of skin, often comprising hundreds of species. This means that mosquitoes choosing between different people might not be selecting based upon “us” but rather the composition of the micro-organisms that live on our skin.

Given the variation and abundance of bacteria in our skin’s microbiota, it is perhaps unsurprising that the incredibly sensitive smell and taste apparatus of a host-seeking female mosquito can detect these differences. We only need to consider female behaviour here as only they bite, and only then when they are producing their eggs.

The composition of our skin microbiota mostly depends on our environment – what we eat and where we live. Everything we touch, eat, drink and wash with has the potential to introduce new microbes, but there’s evidence that a person’s genetics can also influence skin microbiota to a lesser extent. 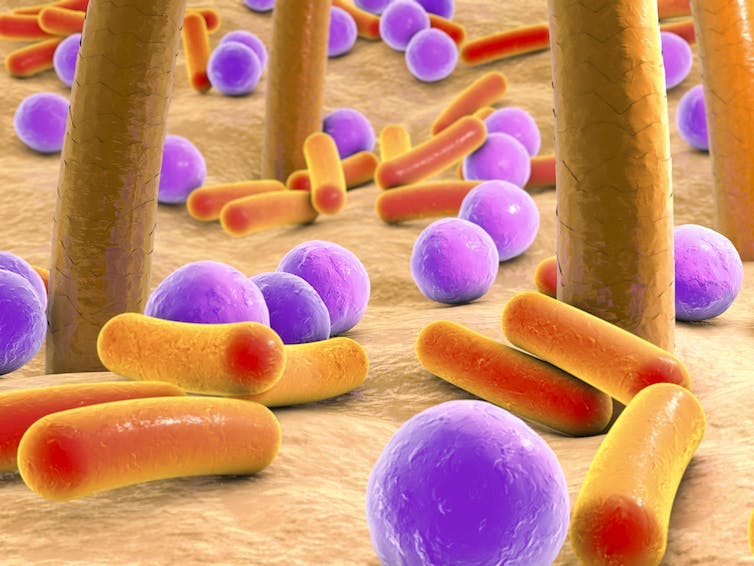 Genetic variation is thought to affect how hospitable your skin is to the various species of microbes that live on it. This may be through genetically controlled production of proteins in the skin that act as barriers and prevent microbes from establishing and growing on the skin, or through more mundane aspects such as a person’s tendency to sweat or how oily their skin is.

It’s worth remembering that, as pure sweat has no discernible odour, sweating itself may not be responsible for attracting mosquitoes. Rather, the variation in the chemical composition of sweat, and sweat production rates between people, might result in beneficial conditions for some microbes that can attract mosquitoes.

While we’re pretty sure that mosquitoes choose their human hosts according to the bacteria which live on our skin, it’s less clear why they prefer the odour signature of some skin’s microbial life over others. If we could learn this secret, perhaps we could change our skin’s bacterial composition to make ourselves less appetising targets.

VIDEO: HERE'S HOW THE MOSQUITO POPULATION IS CONTROLLED