Expired News - Warming ocean fractures Antarctic ice shelf from inside out - The Weather Network
We use cookies on this site to improve your experience as explained in our Cookie Policy. You can reject cookies by changing your browser settings.   READ MORE I ACCEPT

Warming ocean fractures Antarctic ice shelf from inside out 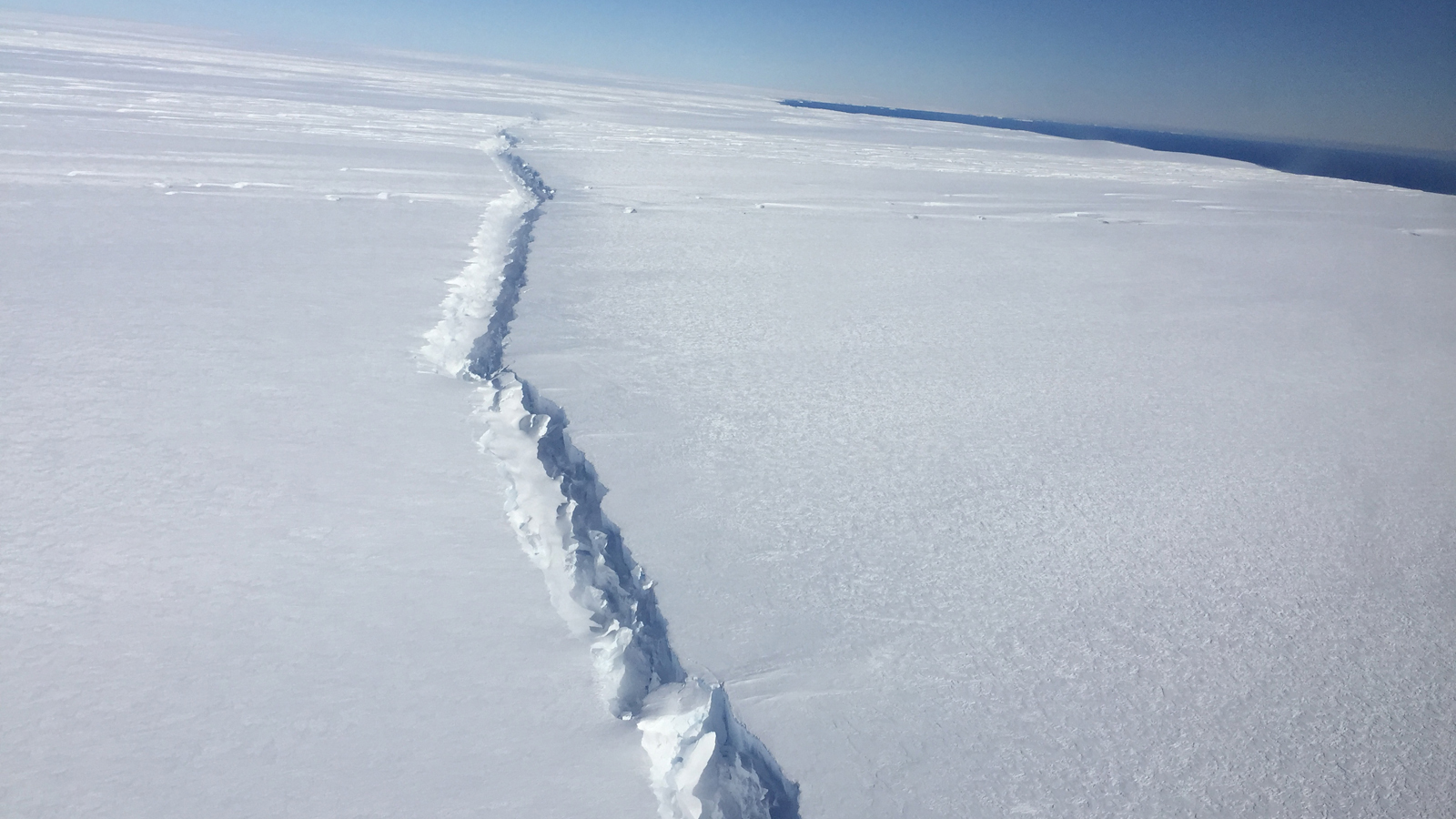 NASA's Operation IceBridge captured this image during a survey flight on November 4, 2016, showing a giant rift in the Pine Island Glacier ice shelf, West Antarctica. A similar rift that formed in 2013 caused a massive iceberg to break off of the glacier in 2015. Credit: NASA/Nathan Kurtz

Tuesday, November 29, 2016, 1:08 PM - Researchers have discovered the source of a giant crack in a West Antarctic glacier, which caused massive icebergs to break off the ice shelf in 2015, and their technique has spotted even more potential weaknesses in the ice shelf, showing that it may decay far quicker than expected.

Back in July and August of 2015, a massive section of West Antarctica's Pine Island glacier, roughly 660 square kilometres in size, broke off and floated out to sea. The reason for this? An immense crack that stretched all the way across the ice shelf.

A new analysis of images collected by Europe's Sentinel-1A satellite has now revealed that this crack originated from inside the glacier, where it radiated upward and outward until it reached the surface and completely broke off the leading edge of the glacier.

Watch below: Satellite imagery reveals the development of an immense rift in the Pine Island glacier, ultimately breaking off a massive chunk in mid-2015.

Although calving events have happened in the past, and will continue to happen going forward, this event was unusual, in how the rift formed.

"Rifts usually form at the margins of an ice shelf, where the ice is thin and subject to shearing that rips it apart," study lead Ian Howat, associate professor of earth sciences at Ohio State, said in a news release. "However, this latest event in the Pine Island Glacier was due to a rift that originated from the center of the ice shelf and propagated out to the margins. This implies that something weakened the center of the ice shelf, with the most likely explanation being a crevasse melted out at the bedrock level by a warming ocean."

According to Ohio State University News:

The rift opened in the bottom of a "valley" in the ice shelf where the ice had thinned compared to the surrounding ice shelf.
The valley is likely a sign of something researchers have long suspected: Because the bottom of the West Antarctic Ice Sheet lies below sea level, ocean water can intrude far inland and remain unseen. New valleys forming on the surface would be one outward sign that ice was melting away far below.
The origin of the rift in the Pine Island Glacier would have gone unseen, too, except that the Landsat 8 images Howat and his team were analyzing happened to be taken when the sun was low in the sky. Long shadows cast across the ice drew the team’s attention to the valley that had formed there.

Although the surface waters along the Antarctic coastline tend to be cool and filled with sea ice, especially during the southern winter, sea surface temperatures have been above normal in the vicinity of Pine Island Glacier.

Note the comparison of the two maps, from Climate Reanalyzer (Pine Island Glacier label added by author), below:

Using the slider to compare these two maps reveals that what open water there is along the coast of West Antarctica (the right-hand side of the continent, in this map view), is actually warmer than normal for this time of year, even with the ice that is floating further away from the coast. These are just the surface waters. The denser, saltier water that lies beneath the surface layer tends to be even warmer, and this deeper layer is what is coming into contact with the base of the ice shelf.

The same thing is happening now, as well. 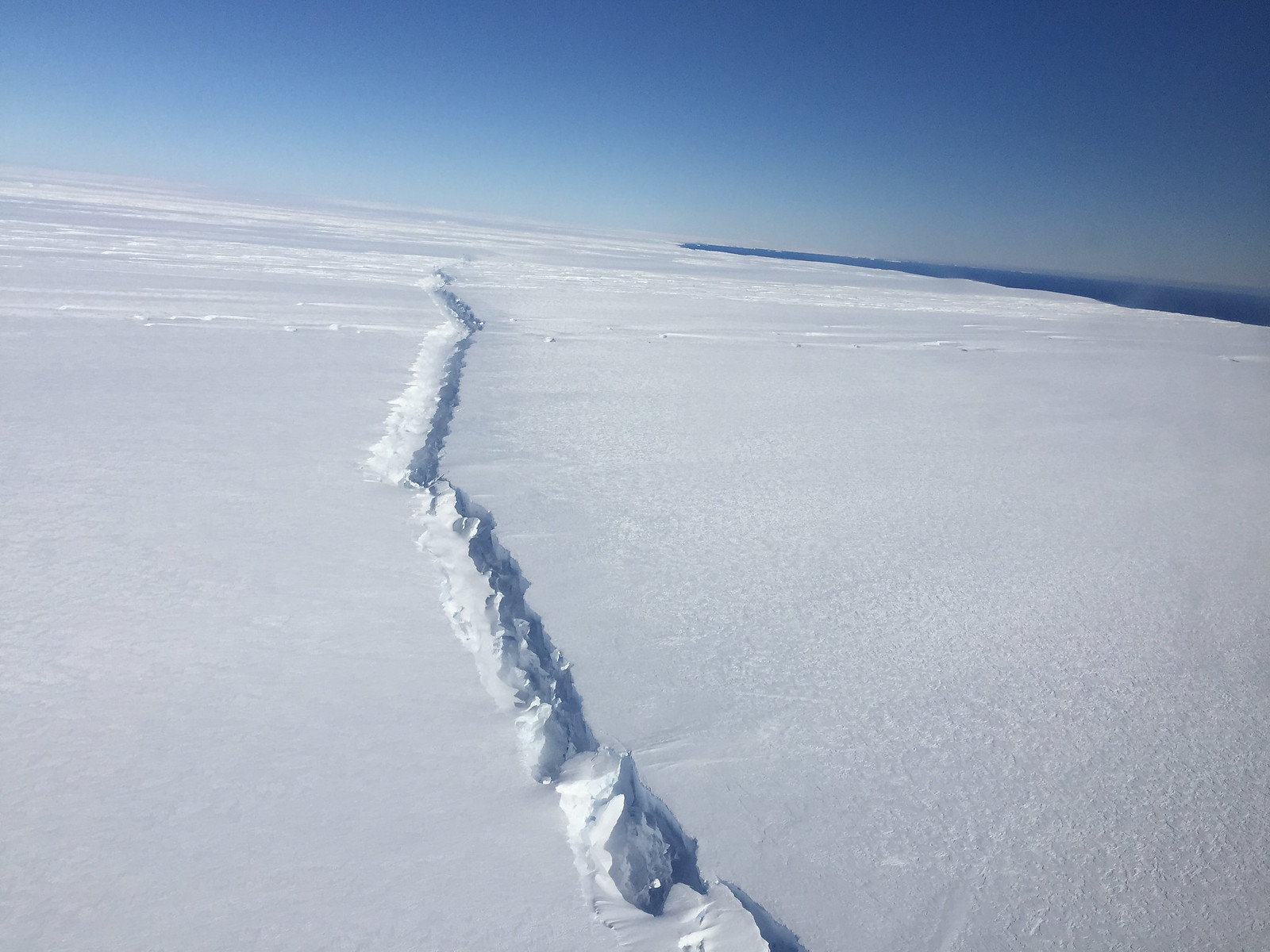 The image above was captured on November 4, 2016, during a flyover by NASA's Operation Icebridge. It reveals yet another giant rift, which has formed in the same way as the one from 2015, and along one of the valleys that have been detected on the ice surface.

"The really troubling thing is that there are many of these valleys further up-glacier," Howat said in the OSU news release. "If they are actually sites of weakness that are prone to rifting, we could potentially see more accelerated ice loss in Antarctica."