Expired News - Martian plain holds enough water ice to fill Lake Superior - The Weather Network
We use cookies on this site to improve your experience as explained in our Cookie Policy. You can reject cookies by changing your browser settings.   READ MORE I ACCEPT

News
Editor's Choice
Why is ice so slippery?
OUT OF THIS WORLD | What's Up In Space - a weekly look at the biggest news coming down to Earth from space 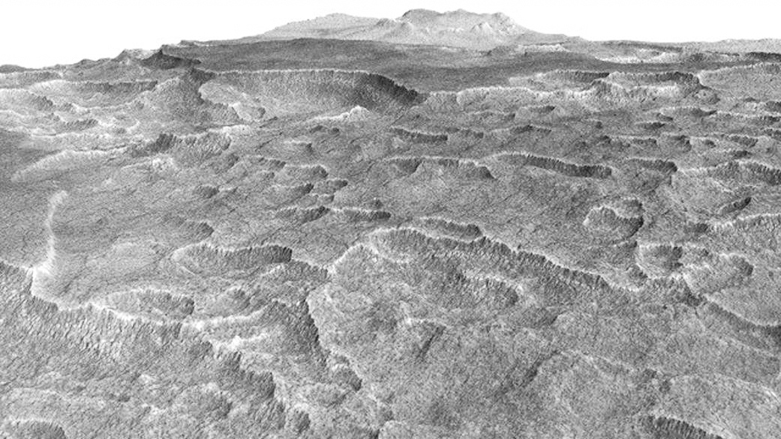 Unusual Martian features called scalloped terrain (shown with exaggerated elevation above) were the key to finding a vast reservoir of water ice beneath Mars' surface. Credit: NASA/JPL-Caltech/Univ. of Arizona

Lake Superior is the third largest freshwater lake in the world, by volume, and a new study has used NASA's Mars Reconnaissance Orbiter to show that there's enough water ice buried under the surface of Mars' Utopia Planitia to fill the lake to its rim, with enough left over to fill Lake Ontario and Lake Erie, and still have some to spare.

Utopia Planitia is a wide, boulder-strewn and cratered basin in Mars' northern hemisphere, that measures around 3,200 kilometres across. Produced when something massive hit Mars in its distant past, these days, this region is remarkable for a few things, including being the landing site of NASA's Viking 2 lander, in 1976, and for some of the curious features that have been spotted from orbit - areas where the surface appears cracked into polygon shapes, and a variety of rimless pits that are known as scalloped terrain or scalloped depressions. 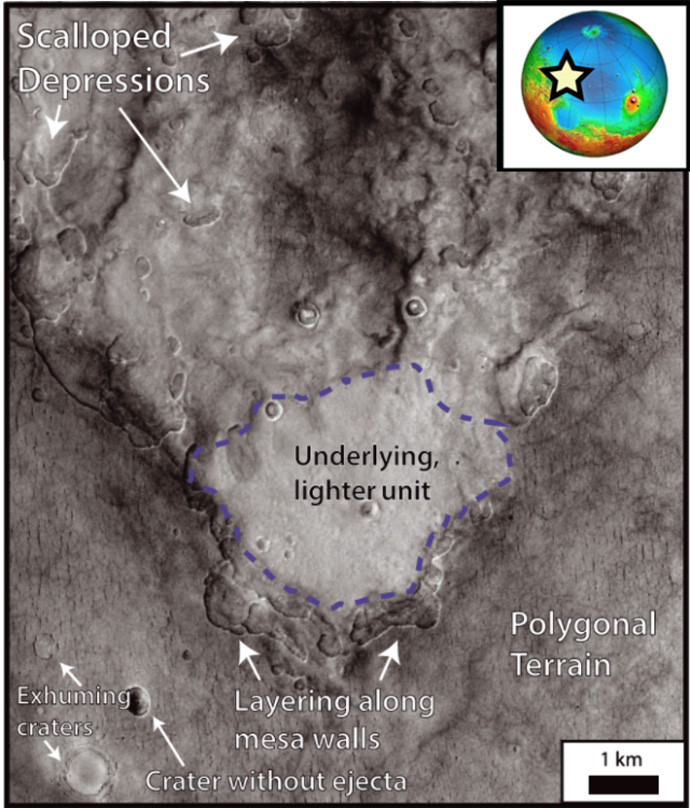 This scalloped terrain appears "like someone took an ice-cream scoop to the ground," study lead author Cassie Stuurman told NASA.

Stuurman, a graduate student at the Institute for Geophysics, at the University of Texas in Austin, performed much of her work for this study while she was still in her undergraduate years at Western University, in London, ON, with the help of Gordon "Oz" Osinski, an associate professor of Earth Sciences, and director of Western's Centre for Planetary Science and Exploration (CPSX).

As Stuurman wrote in her blog, these "scooped" features attracted their attention because when they're found here on Earth, they indicate the presence of water frozen under the surface.

"These features led scientists to believe that this is an ice-rich region of Mars, and inspired my team to examine radar sounding data from the area," she added.

As Osinski said in a NASA press release on Tuesday, "there was an outstanding question as to whether any ice was still present at the Martian Utopia or whether it had been lost over the millions of years since the formation of these polygons and depressions."

While water ice can exist on Mars, deposits at the surface are lost when exposed to the extreme low pressures of the atmosphere. At which causes them to sublimate, turning directly from ice to water vapour. From there, it is drawn away into the dry atmosphere, and much of it is lost to space at the top of the atmosphere. 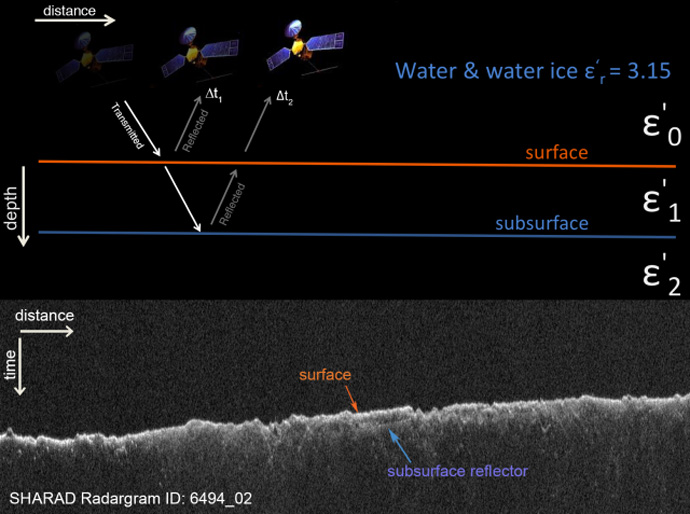 MRO's SHARAD instrument in action, along with one of the profiles it gathered while passing over Utopia Planitia. Credit: Stuurman, 2016

After some 600 passes over the region, collecting radar data reaching up to 1 kilometre below the surface, Stuurman and her team found extensive deposits of water ice - roughly 14,300 cubic kilometres of it, buried between 3 and 33 metres below the surface, and ranging from 10 metres to 170 metres thick.

Crushed and transported back to Earth, that amount of ice could fill the 11,600 cubic kilometre basin of Lake Superior to the top, fill Lake Ontario (at 1,710 km3) to the rim as well, and there'd still be enough left over to fill 2 Lake Eries (at 480 km3 each)!

To see these ice deposits wouldn't be like some scene from a Schwarzenegger movie, though. Rather than huge glaciers of pure water ice, according to Stuurman, the deposits are anywhere from 50-80 per cent pure water, some of it porous, with a mix of dust and rock.

So, where did all of this ice come from, and why is this important?

"This deposit probably formed as snowfall accumulating into an ice sheet mixed with dust during a period in Mars history when the planet's axis was more tilted than it is today," Stuurman said in the NASA press release.

Mars today, with an axial tilt of 25 degrees, accumulates large amounts of water ice at the poles. In cycles lasting about 120,000 years, the tilt varies to nearly twice that much, heating the poles and driving ice to middle latitudes. Climate modeling and previous findings of buried, mid-latitude ice indicate that frozen water accumulates away from the poles during high-tilt periods.

As for its importance, Stuurman wrote that "this is some of the lowest latitude water ice we’ve found on Mars, down to roughly 40 degrees." Some cities that lie at around 40 degrees North latitude on Earth: New York, Denver, Madrid and Beijing.

"Considering that it’s no longer wacky to suggest that people are going to be visiting Mars someday, I don’t think it’s too radical to suggest that it’s important to characterize our low-latitude water ice deposits as potential resources," she continued. "If our future missions are going to have astronauts, those astronauts are going to need something to drink. With these results, we see that Utopia Planitia is a great place for that… provided you find a way to deal with all the radiation and dust storms."

Back in June of this year, NASA played with fire on board one of Orbital Sciences' Cygnus cargo ships, as part of the Saffire-1 experiment, to test how various materials burn in the microgravity of orbiting spacecraft.

Once the latest Cygnus was released from the International Space Station on Monday, it too became part of this experiment, as NASA played firebug again with Saffire-2.
According to updates, they have burned six samples so far - 4 composed of a silicon material at different thicknesses and two being the same cotton-fiberglass blend that was burned during Saffire-1 (one as a control and the other at a different air-flow speed) - while collecting over 100,000 images to show them how, and how fast, the flames spread.

The video above shows the burn sequence from just one sample from the Saffire-1 experiment.

With a total of 9 samples on board the Cygnus as it orbits Earth, three more are planned to be burned before the Cygnus itself burns up upon re-entry to the atmosphere, somewhere over the Pacific Ocean.

The Cassini spacecraft is now less than 10 months away from the end of its mission at Saturn, which began in 2004, and it is definitely going out in style.

Starting on November 30 and going until late April, the spacecraft will make a series of week-long orbits around the ringed planet, flying high above and below the planet's poles and coming closer than it ever has to the edge of Saturn's system of rings.

"We're calling this phase of the mission Cassini's Ring-Grazing Orbits, because we'll be skimming past the outer edge of the rings," Linda Spilker, Cassini project scientist at NASA's Jet Propulsion Laboratory, said in a NASA press release. "In addition, we have two instruments that can sample particles and gases as we cross the ringplane, so in a sense Cassini is also 'grazing' on the rings."

There's no danger expected during these maneuvers, since the spacecraft will still be at least 7,800 kilometres away from the diffuse F-ring on each pass, which is more than enough of a buffer to to keep Cassini safe.

Just get ready to see some absolutely amazing imagery of Saturn's rings, and of the tiny moons that inhabit the outer regions of the ring system!

Watch Below: NASA intentionally sets fires on board orbiting Cygnus spacecraft during the Saffire experiment.