Expired News - 'The blob' blossoms to twice the size of B.C, track it here - The Weather Network
We use cookies on this site to improve your experience as explained in our Cookie Policy. You can reject cookies by changing your browser settings.   READ MORE I ACCEPT

'The blob' blossoms to twice the size of B.C, track it here

Thursday, October 25, 2018, 1:19 PM - It's back, and now on the move. The last known sighting of "The Blob" was in the fall of 2016; subsequently, it quickly dissolved into a pool of cooler-than-normal sea surface temperature anomalies off the coast of British Columbia. An even more impressive blob was in place in 2014, and played a key role in dictating the weather patterns for the Pacific Northwest, especially in the winter months.

Are we off the hook for a snowy winter?

To get a better understanding of the blob, it's best to look back at the glory years of this peculiar feature. Below is a sea surface temperature anomaly from January 2014: 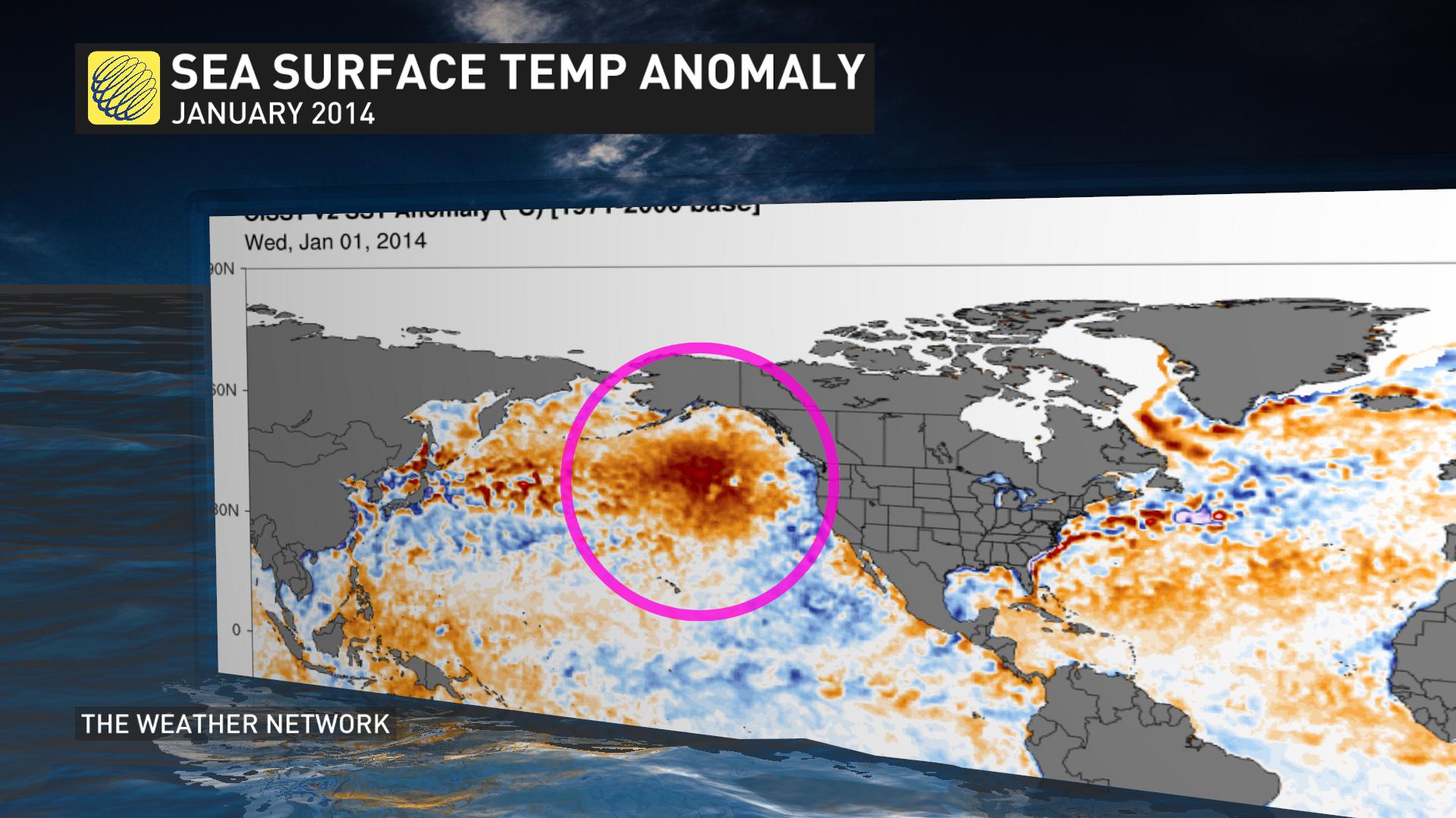 Those who reside in British Columbia know how tame the winter of 2014 and 2015 was for lower elevation snow, with many locations remaining snow-free for several years immediately adjacent to the water. The latter year, 2015, scraped by with near normal snowfall for a large chuck of the alpine, but 2014 was atrocious in most alpine locations across the province.

After the brief resurgence of the blob in September 2016, a cool sea surface temperature anomaly developed as we entered the heart of the 2017 winter season.

SEE ALSO: Should Hurricane Michael have been categorized as a Category 5 storm? 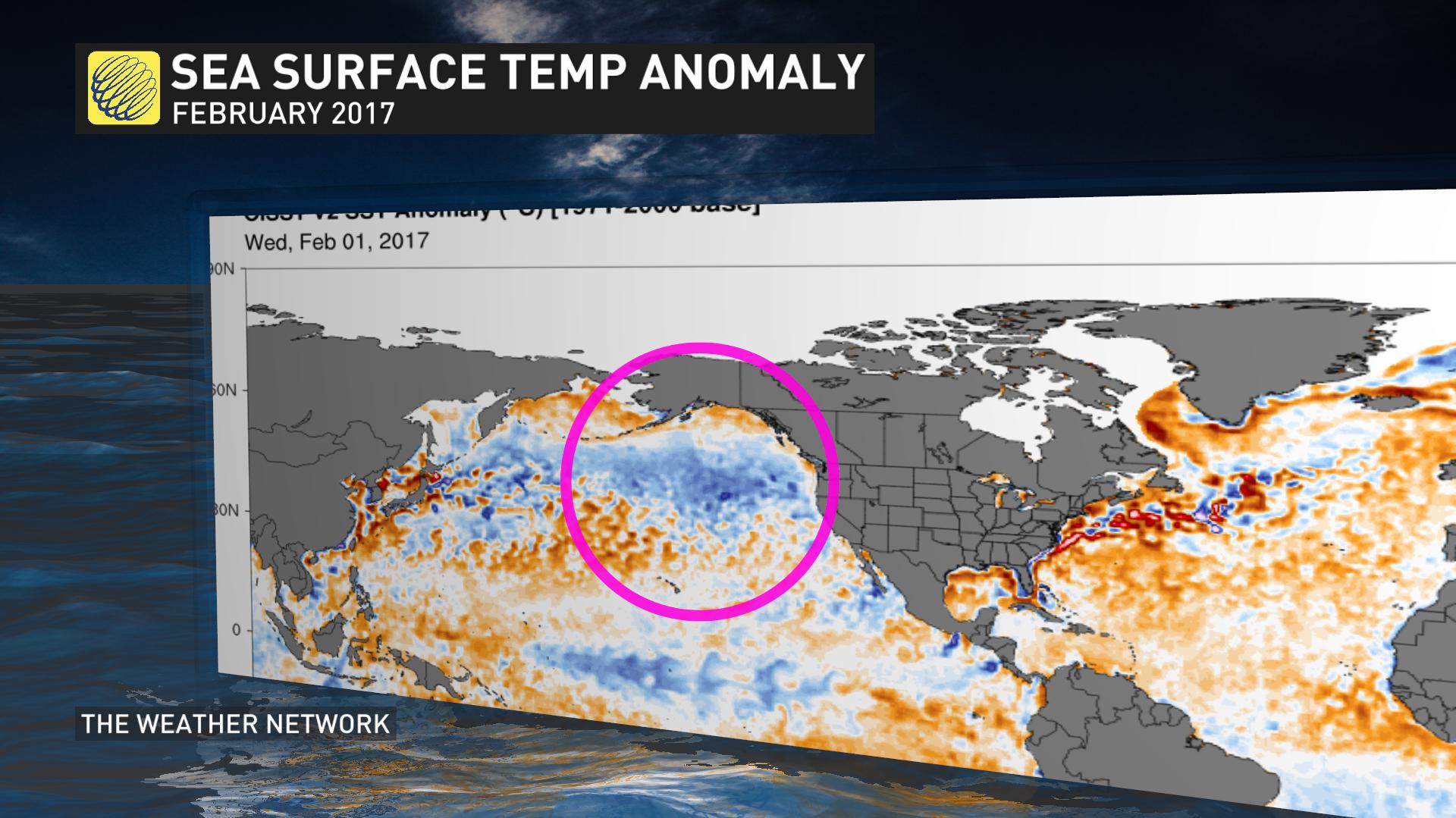 Those in Vancouver and across the South Coast were pummeled by numerous rounds of snowfall, especially in February of 2017, with snow depth in excess of 40 cm in pockets – even at sea level locations. 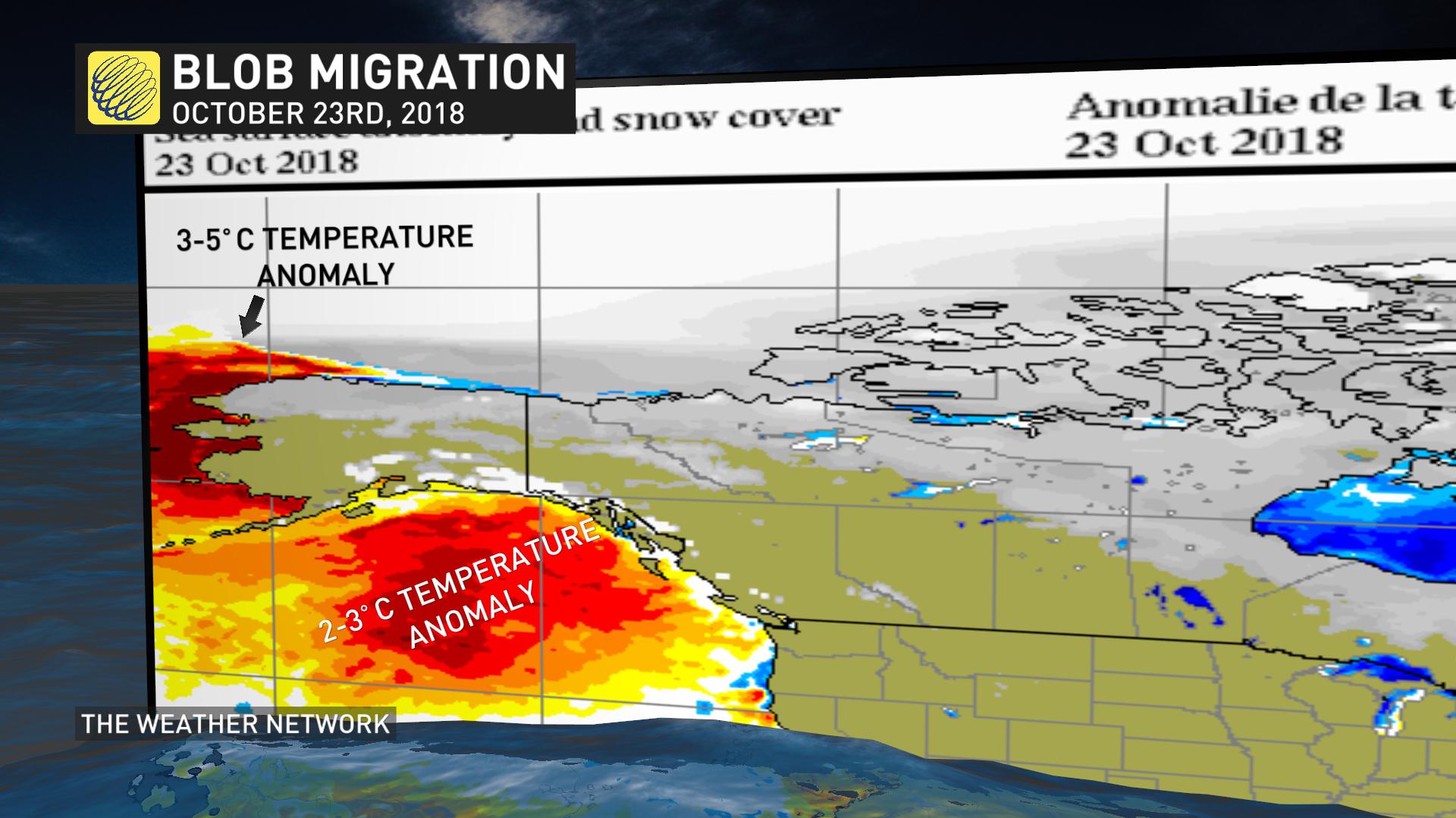 FROM THE MET DESK: HURRICANE FORCE WINDS ON THE WAY TO B.C.

When dissecting the next several weeks of weather predictions and computer models, an active storm track will burst into the scene this week, and will be a big test for the blob. The resilient ridging and 'mega ridge' in Alaska has also played a significant role in fueling the extreme water temperature anomalies, but the fall storms are great at mixing and stirring up the stagnant water, which may wash out the warm anomaly. But, this is highly dependent on how deep this temperature anomaly exists below the sea surface. If it's a relatively shallow feature, Pacific storms should have some success in dismantling the blob.

But, it won't be a permanent pattern change. We have high confidence for a return to ridging in the Pacific towards the end of October spilling over into November. If the blob survives the brief bout of stormy weather next week, it's possible it may become reinforced in November.

It's simply too soon to say, but signals point to less lower elevation snows this year.

We weren't anticipating an average snowpack during the super El Niño of 2015-2016, but the higher elevations managed to overcome the adversity. With this El Niño forecast to be weaker with the core of the warmer waters well west from Peru and Central America (Modoki El Niño), the dominant influence may very well be the sea surface temperatures just west of British Columbia.

The key, as always, will be to see how ridging in the jet stream near the Pacific Coast plays into the winter season, and how many atmospheric rivers will usher in extremely high freezing levels. Those types of events can often vapourize the snowpack over higher terrain.

But, it's far too early to write off a ski season, because we know the B.C. ski season can come in bursts and turn on a dime. Remember, these are the mountains that can produce over 100 cm of snowfall in 24 hours, after all.

Remember when we were crowned the heaviest snowfall on the planet? So don't let this news of the blob deter you, go buy those season passes and support your local ski hill!

MUST SEE: HALLOWEEN FORECAST FOR B.C., TRICK OR TREAT?