Expired News - Did you know? Some sharks have belly buttons - The Weather Network
We use cookies on this site to improve your experience as explained in our Cookie Policy. You can reject cookies by changing your browser settings.   READ MORE I ACCEPT

Did you know? Some sharks have belly buttons

Tuesday, June 12, 2018, 4:17 PM - The first thing that pops into most people’s minds when they think of sharks is of big dumb fish with pointy teeth that are to be greatly feared. But as someone who spends their days studying these creatures, I know just how wrong that image is. For one, thing the diversity of sharks is astounding. The differences between species can even make it seem like some of these animals are barely related.

My new research, carried out with colleagues in the UK and South Africa, shows that significant differences can even exist between male and female members of the same species. Our study of South African great white sharks revealed that females don’t always make the switch from eating fish as youngsters to eating seals and other marine mammals when they’re older. Instead, our findings suggest that some females may specialise on fish prey and use different habitats to males.

How on Earth did we find this out? We conducted a type of chemical study known as stable isotope analysis on small pieces of muscle that we collected from free-swimming white sharks while on board a cage diving ecotourism boat. This gave us information on what the sharks had been eating and which habitats they had been using for a roughly two-year period – the first time that this analysis has been used on samples from live South African sharks.

What do the results mean? If the females are spending more time in coastal areas than males, they may be more likely to be caught in in-shore fisheries and bather safety nets, as well as being exposed to more pollutants. This issue is already affecting South Africa’s white shark population. So better understanding the diversity of shark behaviour could help us improve conservation efforts. 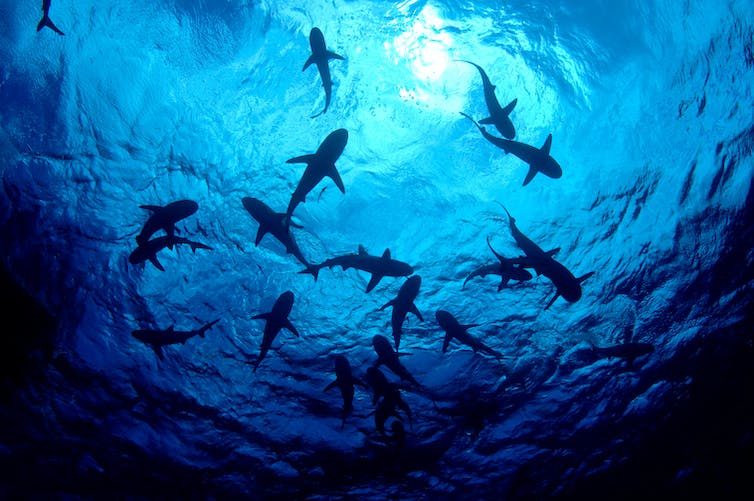 So many sharks. Shutterstock

Differences in the way the sexes use resources is called sexual segregation, and is fairly common in sharks. The reasons behind sexual segregation can be complex, sometimes involving different temperature or nutritional requirements or the need for females to give birth in special nursery habitats.

Rough courtship and mating is likely one of the reasons why females grow to larger sizes than males (to be fair, males don’t have hands to hold on with, so they use their mouths). Female small spotted catsharks, have been documented avoiding sexual harassment, keeping away from any romantic (or bitey) encounters with males by hiding out in shallow water caves in the daytime.

Differences between the sexes is just one example of the incredible variety to be found among the sharks. Things get even more diverse when you look at different species. The sizes of the more than 400 species, for example, range from a 20-centimetre dwarf lantern shark to an 18-metre whale shark.

They also come in a surprising variety of shapes, including the flat and ray-like angel shark and the rounded and eel-like frilled shark. Accordingly, their teeth come in a wonderful variety of forms too, from crushing plates used to crunch crabs in smoothhound sharks, to circular blade-like teeth that give cookiecutter sharks their name. 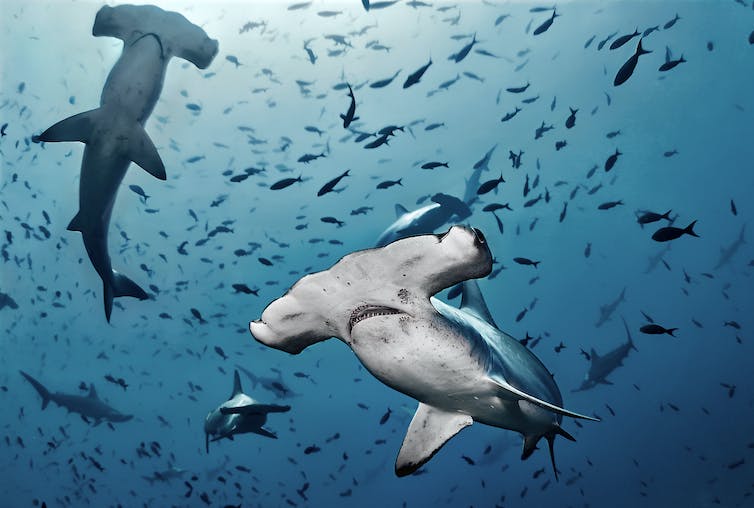 All shapes and sizes. Shutterstock

Sharks have a variety of reproductive types too. Some lay eggs (that also come in a bunch of different shapes and sizes depending on the species). Some develop eggs that hatch inside them, producing pups that then develop in the uterus and are born later.

Others give birth similarly to mammals, with a placenta and umbilical chord. The umbilical cord attaches between the pectoral fins and, when the pups are born, they’re left with an umbilical scar, effectively a bellybutton, which is visible for a few weeks until it heals up completely. A few shark species have also been found to have “virgin births”, reproducing without a sexual partner.

Individual sharks have recently been shown to be just that: individual. In the last few years, the study of shark social interactions and personalities has come to the forefront of shark science. Researchers have found that lemon sharks show a preference for hanging out with familiar individuals. However, just like humans, some sharks are more sociable than others. Port Jackson sharks seem to have best friends that they like to spend time with year after year, and several shark species have been found to to be made up of individuals with different behavioural types, or personalities.

You can even tell individual sharks apart based on their appearance. NASA developed the algorithm that is now used to identify individual whale sharks by their spot patterns (it was originally used to map stars). Each whale shark has a unique pattern that can be identified like a fingerprint, and software is now used to catalogue photographs of individuals to help us monitor their numbers and movement patterns. Several other sharks and rays are now identified by various pattern features. can be identified by the notches on their dorsal fins, as well as other distinguishing features.