Expired News - Eyes wide, jaw agape: See the new map of the Milky Way - The Weather Network
We use cookies on this site to improve your experience as explained in our Cookie Policy. You can reject cookies by changing your browser settings.   READ MORE I ACCEPT

Thursday, April 26, 2018, 7:11 PM - Are you ready to see the most detailed map of the Milky Way, ever, tracking the motions of around 1.7 billion of our galaxy's stars? Check out the amazing gift that the ESA's Gaia mission just delivered to us all!

After nearly two years of scanning the immense galaxy that surrounds our tiny world, the European Space Agency's Gaia telescope has returned its second batch of data. The first batch, which we got a look at back in September of 2016, gave us the positions and motions of around 200 million stars - quite an accomplishment. 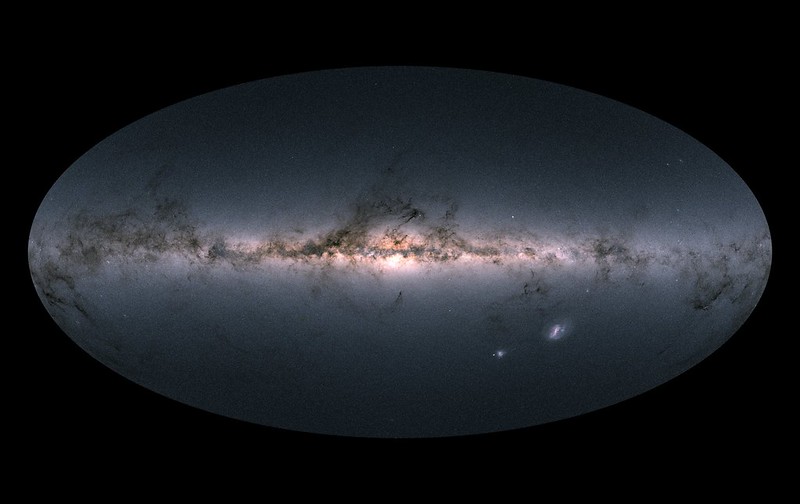 Gaia's all-sky view of our Milky Way Galaxy and neighbouring galaxies, based on measurements of nearly 1.7 billion stars. The map shows the total brightness and colour of stars observed by the ESA satellite in each portion of the sky between July 2014 and May 2016. Click or tap to view the full 46 million pixel version. It's a big file (15.6MB), but it's TOTALLY WORTH IT! Credit: ESA/Gaia/DPAC

This static image isn't the only way we can experience this new map, though. The ESA team performed an amazing feat of stellar cartography, and put together a complete, 360-degree presentation of Gaia's results, complete with the motions of the stars!

Watch below, and pan about in this 360 degree, three-dimensional map of the Milky Way.


If you want more time to peruse the above map, be sure to pause the video, and then pan around for as long as you want. Let it play through at some point, though, so you can see the movement of the stars as well!

Do stars move that much, though, in relation to one another? The stars in our galaxy all orbit around the core, of course. Some have been found shooting across our field of view at high-speed, likely due to being ejected from their original star system. Watching the motions in the video just below, however, most of the stars appear to travel in loops, with the closer stars going through larger loops than those farther away.

These loops aren't the actual motion of the stars, themselves. Instead, they show the "apparent" motion, caused by changing perspective of the telescope, as it observes the locations of the stars while it (and Earth) travel in an elliptical orbit around the Sun. This 'parallax motion' is extremely useful to astronomers, since it allows them to measure the distance to the star, and now - thanks to Gaia - they have the most accurate collection of parallax data ever collected.

The new data release, which covers the period between 25 July 2014 and 23 May 2016, pins down the positions of nearly 1.7 billion stars, and with a much greater precision. For some of the brightest stars in the survey, the level of precision equates to Earth-bound observers being able to spot a Euro coin lying on the surface of the Moon.
With these accurate measurements it is possible to separate the parallax of stars - an apparent shift on the sky caused by Earth's yearly orbit around the Sun - from their true movements through the Galaxy.
The new catalogue lists the parallax and velocity across the sky, or proper motion, for more than 1.3 billion stars. From the most accurate parallax measurements, about ten per cent of the total, astronomers can directly estimate distances to individual stars.

An exciting part of this data release is how it affects other missions and surveys that are exploring our galaxy, such as the Kepler Space Telescope.

According to Bedell, who is an astronomer with the Center for Computational Astrophysics, at the Flatiron Institute, in New York City, the dark blue stars in the animation above are those closest to us, while the light green ones are farthest away.

Knowing the timing of when these stars enter and leave the Kepler field of view can help astronomers better understand the data they have from the mission, which is used to locate alien planets, as they transit across the face of their star.

Stay tuned for more from Gaia! As stated above, this data only covers up until May 23, 2016. It's been nearly two years since then, and the mission is expected to run for at least five years total (ending in July of 2019, according to the ESA), so we'll be seeing even better, more detailed maps in the future.

How much better is Gaia's latest view of the galaxy? JUST WATCH!