Expired News - Milky Way core may be CROWDED with thousands of black holes - The Weather Network
We use cookies on this site to improve your experience as explained in our Cookie Policy. You can reject cookies by changing your browser settings.   READ MORE I ACCEPT

Milky Way core may be CROWDED with thousands of black holes

Thursday, April 5, 2018, 6:50 PM - The core of our Milky Way galaxy is home to a monster black hole, and new research has now found that the monster is not only not alone, but could have tens of thousands of smaller black holes whizzing around it.

Sagittarius A*, the supermassive black hole that lurks at the centre of the Milky Way, is certainly the dominant feature in that region of space. Astronomers have noted dozens of massive stars hurtling around that one point in space, on orbits that are reminiscent of how comets orbit around our Sun. This is how they managed to narrow down the position of Sag A* in the first place, as the black hole's immense gravity acts as the focal point for the crazy orbits of these stars.

In a new research paper published in the journal Nature on April 5, an international team of scientists, led by Columbia University astrophysicist Chuck Hailey, have discovered a dozen quiet, stellar-mass black holes that are within 1 parsec (3.26 light years) of Sag A*. Even bigger, their discovery hints at tens of thousands more still lurking there, undetected.

"There are only about five dozen known black holes in the entire galaxy - 100,000 light years wide - and there are supposed to be 10,000 to 20,000 of these things in a region just six light years wide that no one has been able to find," Hailey said in a Columbia University press release. "There hasn’t been much credible evidence."

Finding a black hole is no easy task, though. By definition, they don't emit any strong evidence of their existence, at least when they're on their own.

Put them with a companion star, though, and the chances get better. You still need to know exactly what to look for, and you need to look very closely, of course.

There aren't any convenient pairs like Cygnus X-1 in the vicinity of Sag A*, however there are plenty of binary systems sending off powerful x-ray pulses. Rather than containing black holes, though, they are known to be pairs similar to Cygnus X-1, but instead of a black hole, there is either a neutron star or a white dwarf star drawing matter from a companion and emitting x-rays as a result.

So, Hailey and his colleagues had to look past these other sources, and rely on what they know of how stellar mass black holes behave when they have smaller, captured companion stars.

While these kinds of binary pairs give off big bursts of x-rays in their active state, when the black hole first snags the passing low-mass star, according to Hailey, this is expected to happen only once every 100 to 1,000 years. Since that's far too long a wait, it's better to focus on the fainter, more consistent x-rays emitted by the pairs after they've been together for awhile, and they settle down into their inactive state.

By going through data already collected from the region of Sag A*, by NASA's Chandra X-ray Observatory, their search turned up 12 results that match what they expect from these inactive black hole - low-mass star binary systems. 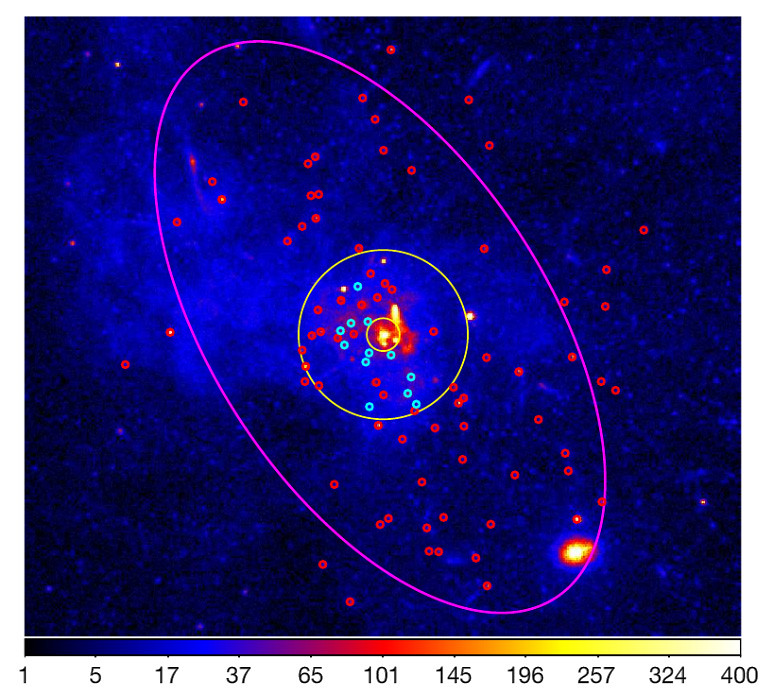 Chandra's X-ray view of the core of the Milky Way. The small red circles scattered throughout the field of view are x-ray sources produced by white dwarf binaries. The small blue circles represent the dozen fainter sources that indicate the presence of a stellar-mass black hole - low-mass star binary. The larger yellow circle denotes a distance of 1 parsec (3.26 ly) from Sag A*. The smaller yellow circle is a distance of 0.2 parsecs from Sag A*. The team did not analyze the region inside the inner yellow circle. Credit: Hailey, et al. Nature, April 5, 2018.

Using this sampling, and applying their properties and distribution in space to the rest of the area within 1 parsec of Sag A*, the researchers revealed that there could be anywhere from 300 to 500 of these black hole - low-mass star binaries surrounding the supermassive black hole, as well as around 10,000 lone stellar-mass black holes in that same region of space.

"This finding confirms a major theory and the implications are many," Hailey said. "It is going to significantly advance gravitational wave research because knowing the number of black holes in the center of a typical galaxy can help in better predicting how many gravitational wave events may be associated with them. All the information astrophysicists need is at the center of the galaxy."