Expired News - Winter far from over: Interesting pattern changes ahead - The Weather Network
We use cookies on this site to improve your experience as explained in our Cookie Policy. You can reject cookies by changing your browser settings.   READ MORE I ACCEPT

Winter far from over: Interesting pattern changes ahead

Sunday, February 18, 2018, 5:43 PM - Another pattern change is evolving across North America for the remainder of February, but it's not exactly what we initially expected. Keep reading to find out what changed.

In late January, we had a fairly good grasp on how the first two weeks of February were going to play out: the polar vortex would migrate south over Hudson Bay, allowing for waves of Arctic air to flood in across most of the country.

Frigid air would be persistent over Nunavut and the Yukon, but across the south, it would be more akin to someone periodically opening the freezer door with waves of Arctic air. This pattern played out nicely and is seen in the image below for the first 12 days of February. 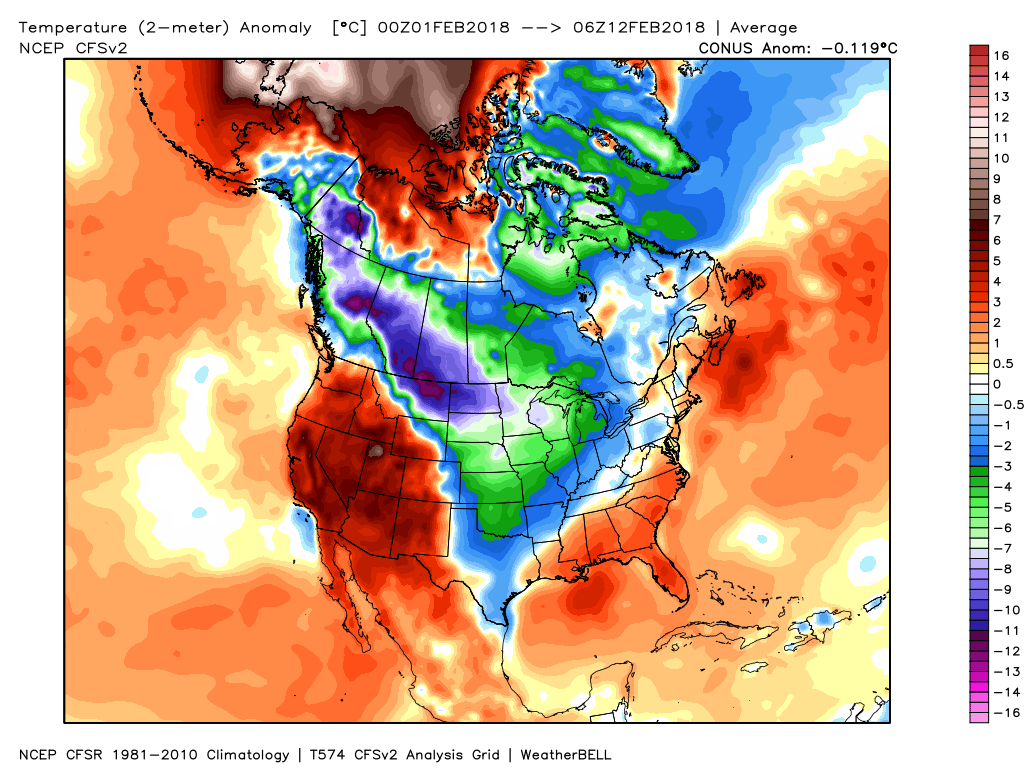 Imaged above are observed temperature anomalies for February (as of February 12). The greens, blues and purples show areas where below seasonal temperatures were found, while the reds are above seasonal. Courtesy: WeatherBELL.

For mid to late month, a ridge over British Columbia and Alberta was forecast to bring a drier and milder stretch of weather, while a digging trough over eastern Canada would lead to a renewed blast of Arctic air.

But because of recent events, this will not come to fruition... as fast.

Ever heard of the butterfly effect? It's the concept that the delicate flapping of a butterfly's wings can initiate a hurricane. An overstated example of the chaotic nature of our atmosphere, but it gets the idea across: small perturbations in the atmosphere can lead to drastically different outcomes in weather systems.

In this case, two strong tropical cyclones that formed in the Pacific Ocean this week are the butterflies.

These two energetic power houses continue to pump the atmosphere with heat, effectively changing the larger scale pattern in the area. Without diving into complicated details, the tropical cyclones have interrupted the evolution of the expected pattern over the Pacific Ocean which will have a downstream impact on weather patterns across Canada over the next couple of weeks. For those who are weather-savvy: the Madden-Julian Oscillation will remain in phase 7 much longer than expected, promoting a strong subtropical ridge over eastern North America.

Imaged above is the forecast for the Madden-Julian Oscillation. Courtesy: Climate Prediction Center

This week, a well predicted SSW event occurred and displaced the coldest air in the stratosphere from the North Pole southward over Canada. In fact it was a record-breaking event and will likely play a significant role in our weather in the North Hemisphere over the next four to six weeks.

"Records are meant to be broken" new all time record set in poleward #heat transport into the #polar stratosphere.Increasing trend was subject of my 2009 paper and still relevant today: https://t.co/xiLLhabKe8 pic.twitter.com/yqdt6WBG7g

What does all this weather jargon mean?

For the next two weeks, the focus of the cold will be over western Canada with a wintry pattern and a few chances for snowfall ahead. It won't be persistently cold for everyone, but you'll trend colder over the entire period. While this pattern will bring unseasonably cool air, it also brings plenty of sunshine!

A milder pattern from the Great Lakes through southern Quebec and into the Maritimes. That being said; we're in the heart of winter, and in a mild pattern, so you can still get impactful winter weather - especially since Arctic air will be close by. Rain and freezing rain are more likely with storms moving through as we fluctuate above and below the freezing mark across the south, but the "milder" pattern in northern Ontario still leaves it cold enough for snow and freezing rain, and travel will likely be impacted by a few snowy systems.

Newfoundland may be a different story, with the chance for Arctic air to flood in more periodically than we've seen so far this winter. Rain is still possible, but our chances for seeing snowfall increases slightly. Labrador will continue to see periodic snowfall and may reach their all-time record snow depth of 206 cm in Happy Valley-Goose Bay.

Northern Canada will continue to trend on the cold side as the core of the tropospheric polar vortex looms overhead, with its frigid reflection at the surface over Nunavut and the Northwest Territories. This is similar to the pattern of the past couple of weeks.

Generic pattern map for the last 10 days of February across North America. Blue indicates areas of below seasonal temperatures, orange above seasonal. The arrows indicate the dominant jet stream pattern over this time period.

As we head into early March, we expect the focus of the cold to press further into the east, lifting out of British Columbia and the Yukon as a ridge builds over the west, bringing milder and drier weather back in place. Also of note will be the relative warming pattern for Northern Canada as a blocking pattern develops over the Arctic. This will shift the coldest air out of the north and send it into southern Canada.

However, the predictability in this timeframe is lower due to the record-breaking event in the stratosphere. The downward effects of the stratosphere into the troposphere are poorly handled by models and we're likely entering a highly volatile period in forecasting for early March, people.

Generic pattern map for early March across North America. Blues indicate areas of below seasonal temperatures, orange above. The arrows indicate the dominant jet stream pattern over this time period.

To sum up, winter looks to be far from over for most of Canada and there will definitely be some interesting changes ahead as we enter March.

Of course weather isn't a perfect science and our outlook will be fine-tuned in the future as we continue to monitor the atmosphere. But hey, that's what predicting the future is all about: you have to learn to appreciate and be humbled by the chaotic nature of nature.

Watch Below: Scary video inside a wintry 50-car pileup