Expired News - CANADA IN 2030: Future of our water and changing coastlines - The Weather Network
We use cookies on this site to improve your experience as explained in our Cookie Policy. You can reject cookies by changing your browser settings.   READ MORE I ACCEPT

CANADA IN 2030: Future of our water and changing coastlines

Monday, June 11, 2018, 4:15 PM - Flooding in New Brunswick, drought in the Prairies, disappearing permafrost in the North, and the oceans creeping up on our coasts - the reality of a changing climate in Canada is becoming harder to ignore, and the United Nations has stated that it is the biggest systematic threat to humanity.

In Water, Fire, Earth, Air - a four-part series - we will look at how climate change will affect different regions in Canada by categorizing the regions by element to provide a unique and comprehensive understanding of how Canadian life could change, assuming our carbon emissions continue along a business as usual scenario.

Is Canada a global environmental leader?

From Justin Trudeau’s portrayal of Canada as a global leader in fighting climate change to famous environmentalists like James Cameron and David Suzuki, it may appear like Canada has a handle on the changing environment.

Canada has made notable effort to improve its environmental impact and is a signatory to the Paris Agreement - an international effort where countries commit to reduce domestic carbon emissions to prevent global temperatures from rising above 2 degrees Celsius during this century. But the government’s purchase of a new pipeline using over $4.5 billion CND of taxpayers money demonstrates Canada’s conflicting stance on environmental protection and commitments to reducing carbon emissions.

Canada committed to lowering carbon emissions by 30 per cent from 2005 levels by 2030 with a target carbon dioxide (CO2) emission amount between 504 and 646 megatonnes of CO2. However, projections in 2016 showed that even the best case scenario would blow past the target with an estimate of 697 megatonnes, and a worst-case estimate of 790 megatonnes.

The goal to reduce carbon emissions by 30 per cent by 2030 raises the question, how will Canada change during this short period of time if the country doesn’t reach its goal?

Fast Facts - Water and The North and Atlantic Canada

• The Arctic (Yukon, Northwest Territories, Nunavut) is warming almost twice as fast as the rest of Canada

The Arctic is warming at alarming rates

Many picture climate change as scorching hot summers and drought, and some assume that the North remains cold. In reality, dangerously rapid changes are occurring where only 0.32 per cent of the Canadian population lives – and average temperatures have increased 2.7 degrees Celsius in Nunavut compared to an increase of 1.7 degrees Celsius for the rest of Canada. This unusually rapid warming in the North can be referred to as polar or Arctic amplification, which means that temperatures in the Arctic have warmed twice as fast as regions in the mid-latitudes, such as southern Canada.

The Yukon, Northwest Territories, and Nunavut make up over 39 per cent of Canada’s total land mass but in 2016 just over 100,000 of Canada’s 35 million total population live here. Scientists and policy makers are beginning to pay attention to why the Arctic is warming so quickly and how this could affect the rest of Canada. 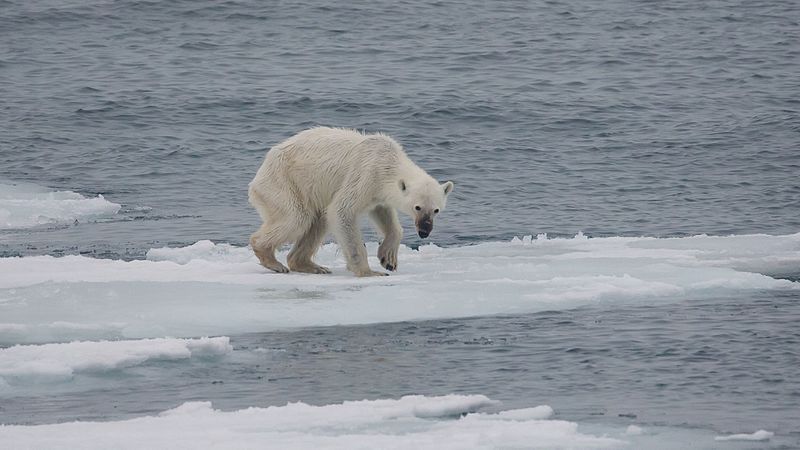 Polar bears rely on annual sea ice for hunting and survival, which is threatened by the warming climate. Credit: Wikimedia Commons

Arctic amplification is occurring because warming temperatures since the Industrial Revolution have caused more Arctic ice to melt - as snow and ice melts the albedo decreases, meaning there are less reflective white surfaces and instead a larger amount of darker surfaces, such as the ocean and ground, which are less reflective. This creates an albedo feedback relationship - the more dark surfaces are exposed, the more the heat from the sun is absorbed, the dark surfaces retain this heat, more heat causes snow and ice to melt, and the cycle repeats. As more carbon is released into the atmosphere this warming cycle will continue and scientists are coming up with creative and ground-breaking ideas to prevent these endless cycles, such as by covering Greenland’s ice sheet with a white blanket to slow ice from melting.

Public health, housing, and poverty and just some aspects of Northern Canadian life that will be severely affected by climate change. Northern populations largely consist of Inuit and First Nations communities whose health and quality of life is closely related to the environment. Shorelines are eroding and permafrost, ground that stays frozen for two years or longer, is melting, which is causing roads to buckle and the foundations of houses to crack.

Several strategies and technologies are used to control things for now - governments are revising and increasing budgets for adaptation and mitigation strategies, community freezers are being used to store food instead of permafrost, and scientists are collaborating with First Nation peoples to utilize their traditional ecological knowledge, which is knowledge about the environment gained from generations of Indigenous communities living closely with the land.

• The government will have to spend more money on infrastructure to withstand the liquefying ground as permafrost melts - thermosyphons will have to be injected into the ground of a former mining site in Yellowknife to keep buried arsenic, an amount large enough to kill the entire population of Earth several times over, frozen and away from the air and waterways

• Food security and housing issues will likely worsen - accessibility to traditional hunting routes and grounds will become more inaccessible as ice melts and as weather becomes increasingly extreme and unpredictable, the price of imported food will go up

• Traditional ecological knowledge, such as Inuit Qaujimajatuqangit, could provide critical knowledge to adequately mitigate and adapt to climate change while maintaining culture, traditional activities, and well-being, such as the current collaboration with scientists to further understand how polar bear populations are changing.

Home and business owners are still recovering from worst spring flooding in over 35 years of the Saint John River, New Brunswick during May where over 10,000 homes and businesses were within flood zones. Flooding, extreme precipitation, and destructive storms have been a part of Atlantic Canada’s history for hundreds of years and these communities are beginning to plan for adaptation and mitigation strategies as storm frequencies and sea level rise worsen.

Cities will have to plan how many times rebuilding infrastructure can be afforded. Credit: Wikimedia Commons

Sea level rise in Canada is projected to be most prominent along Atlantic coastlines and could force many communities to move inwards by 2030. Rising oceans will affect all coastlines globally, but scientists are making note of a faster rise along the Atlantic coast than the Pacific. The rise is caused by melting ice and thermal expansion of this water - water molecules expand in size as they absorb heat. The Atlantic could suffer more because melting Arctic ice slows down the convective actions of the Atlantic Basin, causing the ocean interior to become warmer and less ventilated. The frequency and severity of storms that Atlantic Canada will weather will increase with climate change - as the atmosphere becomes warmer it can hold more moisture and causes more evaporation from oceans, resulting in more storms with heavier precipitation.

• The fishing industry will change - even if the climate only warms 2 degrees Celsius, fish species will move on average 100 kilometres north to avoid warming waters. A warming of four degrees Celsius could result in a northward movement of 600 kilometres

• Floods will be bigger, more frequent, and costly - water damage is the leading cause of property damage in Canada

• Shrinking Acadian forest - Atlantic Canada’s wood supply will decrease as warming temperatures will cause cold-adapted tree species, such as balsam fir and spruce, to die off and prevent new seedlings from growing

• Sea level rise, flooding, ice melt, and extreme precipitation storms will affect majority of Canada as well. Previous extreme weather events, such as the Fort McMurray wildfire in 2016, prove that when one region of Canada suffers, the entire nation feels the effects and rises up to aid in recovery.