Expired News - MASSIVE fires in California, impacts to Canada on the way? - The Weather Network
We use cookies on this site to improve your experience as explained in our Cookie Policy. You can reject cookies by changing your browser settings.   READ MORE I ACCEPT

MASSIVE fires in California, impacts to Canada on the way?

Monday, November 12, 2018, 8:00 AM - In just a few short days, over 100,000 acres (45,000 hectares) of land has been charred by the extreme wildfires in California, with two major fire complexes in the state. This particular natural disaster has burned the largest amount of structures on record in California involving a single fire. But, where does all the ash and smoke eventually migrate to, and is there a possibility some of the haze can reach Canada?

The damage and human impact has been staggering, particularly with the Camp Fire, with NEARLY 7,000 structures destroyed, making it one of the most damaging fires in California history. Unfortunately, it's an all too simple recipe to create these dangerous fire conditions.

Lack of rainfall and drought conditions paired with low relative humidity (atmospheric moisture), and strong Santa Ana winds to fan the flames at staggering rates. In fact, it was reported that fire spread was 80 football fields a minute, with the fire literally jumping ahead and racing uphills.

The embers can traverse up the hilly terrain of California at an extremely fast pace; consequently, fires travel at a faster forward speed uphill then moving downhill.


Update: Officials report that the #CampFire has destroyed 6,713 structures. It is now the most destructive individual fire on record in California.

Seven of the top 20 most destructive fires in the state have occurred since October 2017. Utterly remarkable. pic.twitter.com/xwqz4s6rLx

The fire activity near the Camp fire was even detected on radar (KBBX), which is fairly rare, and shows the intensity of the flames and ash plume that was detected using this method:


But, what's the climate change connection?

In short, it's a little complicated of a relationship, but the best source I can direct you to is Daniel Swain, a respected climate scientist from California.

But in short, the finger prints of climate change are all over these particular type of fire events:

SMOKE ON THE MOVE

Western Canada has certainly received it's fair share of smoke and extraordinary poor air quality this past summer, with the largest area burned in British Columbia's history.

And, it's not entirely unusual for smoke to make it's way up the coast of North America. Take last December for example, where the Thomas Fire smoke plume migrated up the coast into the Pacific Northwest.

Now, it's time to attempt to dissect the smoke plume and it's possible trajectory. Some of the american models specifically forecast the movement for smoke, so let's look about 48 hours into the future – well into Tuesday. 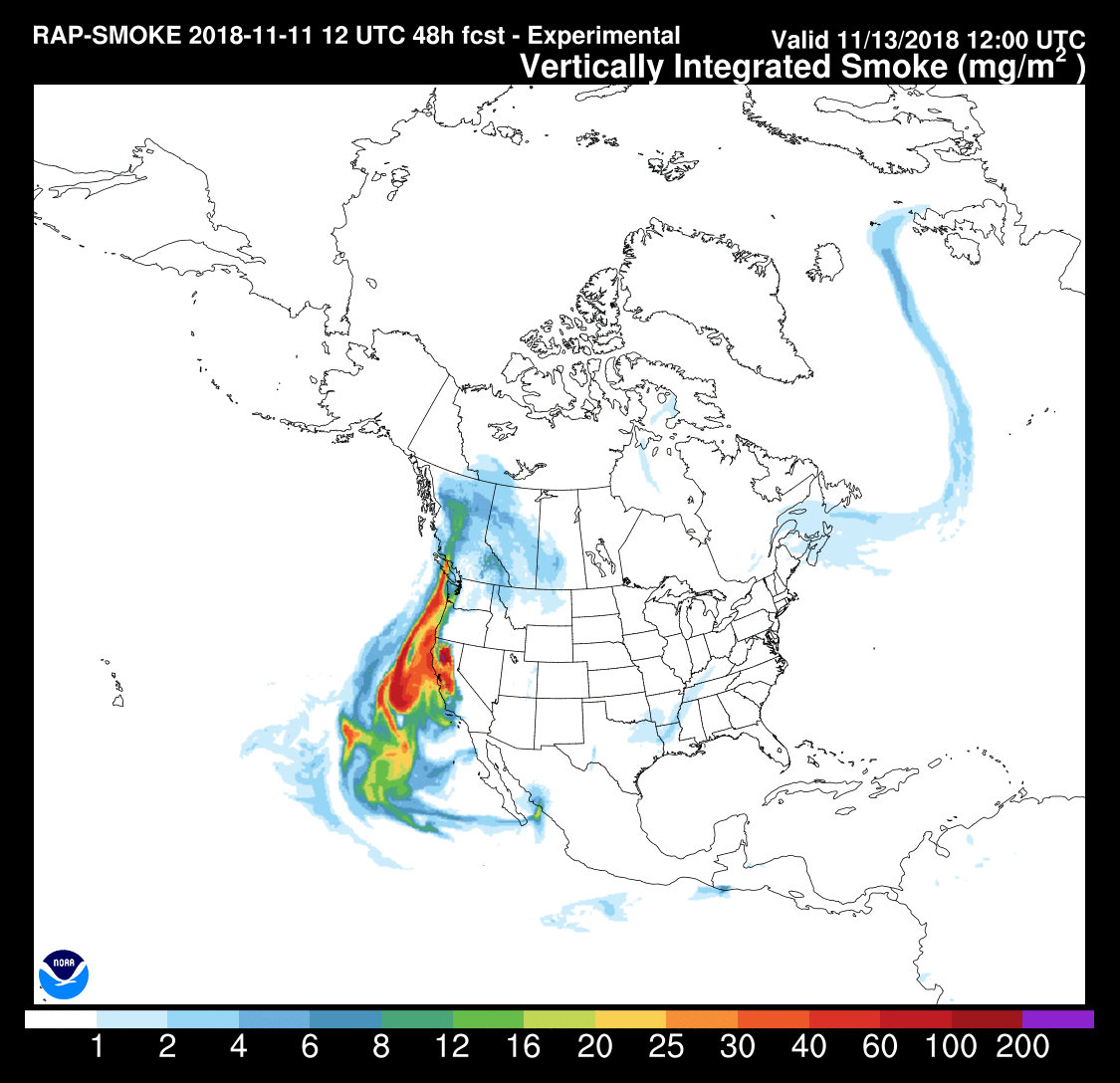 This computer model above highlights a thin stream of smoky air wandering up the coast of the Pacific Northwest, compliments of a ridge of high pressure that is nestled up against the coast.

This conduit, the moderately strong southwest flow, is an express route for the fine particulate matter to race towards the next system impacting the B.C. coast on Tuesday. But, keep in mind, there's some uncertainty which we can tackle now.

Let's resort to some pretty sophisticated ensemble computer models, to double check if the model above is on the right track. The NOAA Hysplit Model has a knack to track air particles, so when we sample the air above B.C. on November 13th, where is it most likely originating from?

Here are the numerous solutions: 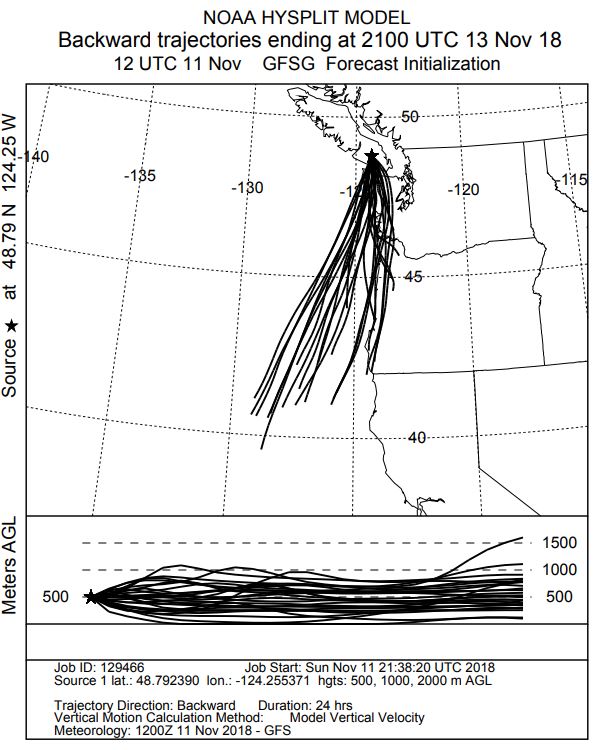 When accounting for some uncertainty, ALL the computer model predictions bring some smoke towards the coast of B.C., with all the air parcels originating from off the coast of Northern California. But, it doesn't mean the smoke will mix down the surface in, especially with the frontal systems and concentration of haze by the time the smoke arrives. It may be possible for the smoke to even travel into northern Canada, like the Yukon and the Northwest Territories...only time will tell.

If you recognize a thin haze over the skies across B.C. over the coming days, take a small moment to reflect on the significance and loss of life from such a catastrophic event to our friends in California. A little temporary haze is the least of our worries, but it symbolizes a much larger problem with our large scale climate system.