Expired News - Mars and the Perseids are the STARS of astronomy this summer - The Weather Network
We use cookies on this site to improve your experience as explained in our Cookie Policy. You can reject cookies by changing your browser settings.   READ MORE I ACCEPT

News
Editor's Choice
Blue Moon to make Halloween extra spooky this year
OUT OF THIS WORLD | Earth, Space And The Stuff In Between - a daily journey through weather, space and science with meteorologist/science writer Scott Sutherland

Mars and the Perseids are the STARS of astronomy this summer

Sunday, July 8, 2018, 11:33 AM - Now that Summer is upon us, get ready for the longest lunar eclipse in a century, the biggest, brightest Mars in over 30 years, and possibly the best Perseid meteor shower in years!

From planets shining big and bright, to mini-Moons and remote eclipses, to possibly the best opportunity to see the Perseid Meteor Shower, there are some great skywatching and stargazing events coming up.

Here's what to watch for:

Just one month after we see Saturn at opposition, Mars lines up perfectly with the Sun and Earth. 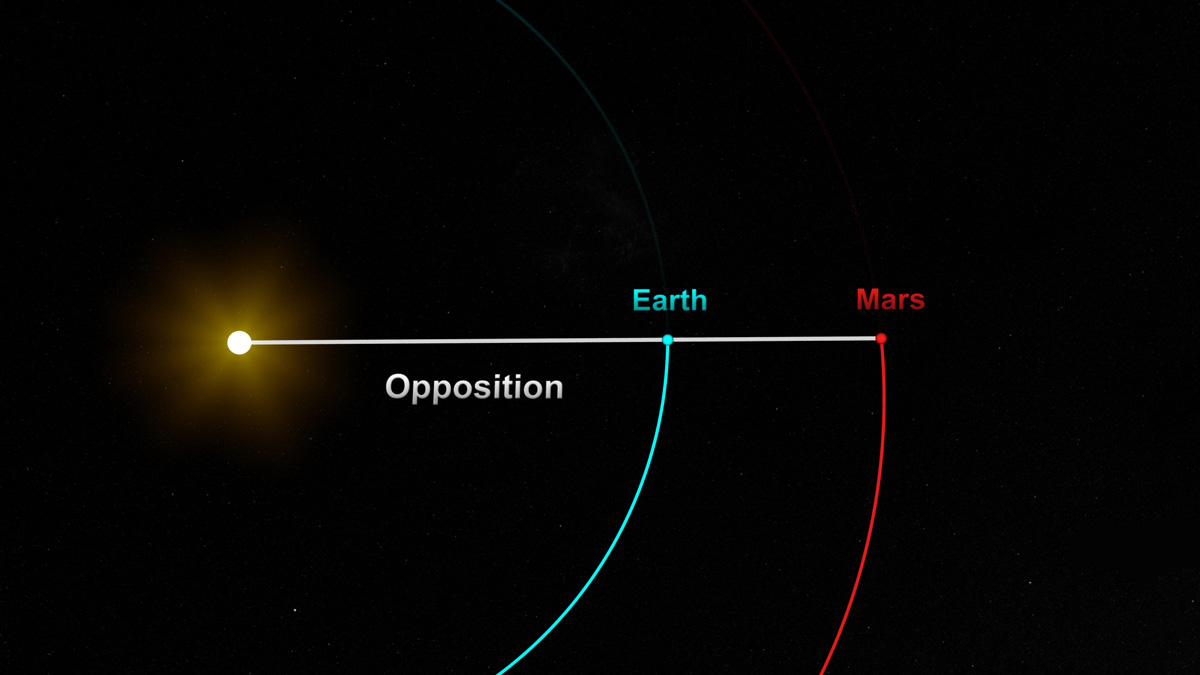 Remarkable Thing One: the Red Planet will be up all night, rising at sunset and setting at sunrise, and not far away from it, on its entire trek across the sky that night, will be the farthest, and thus smallest Full Moon of 2018 - the 'Mini' Thunder Moon. 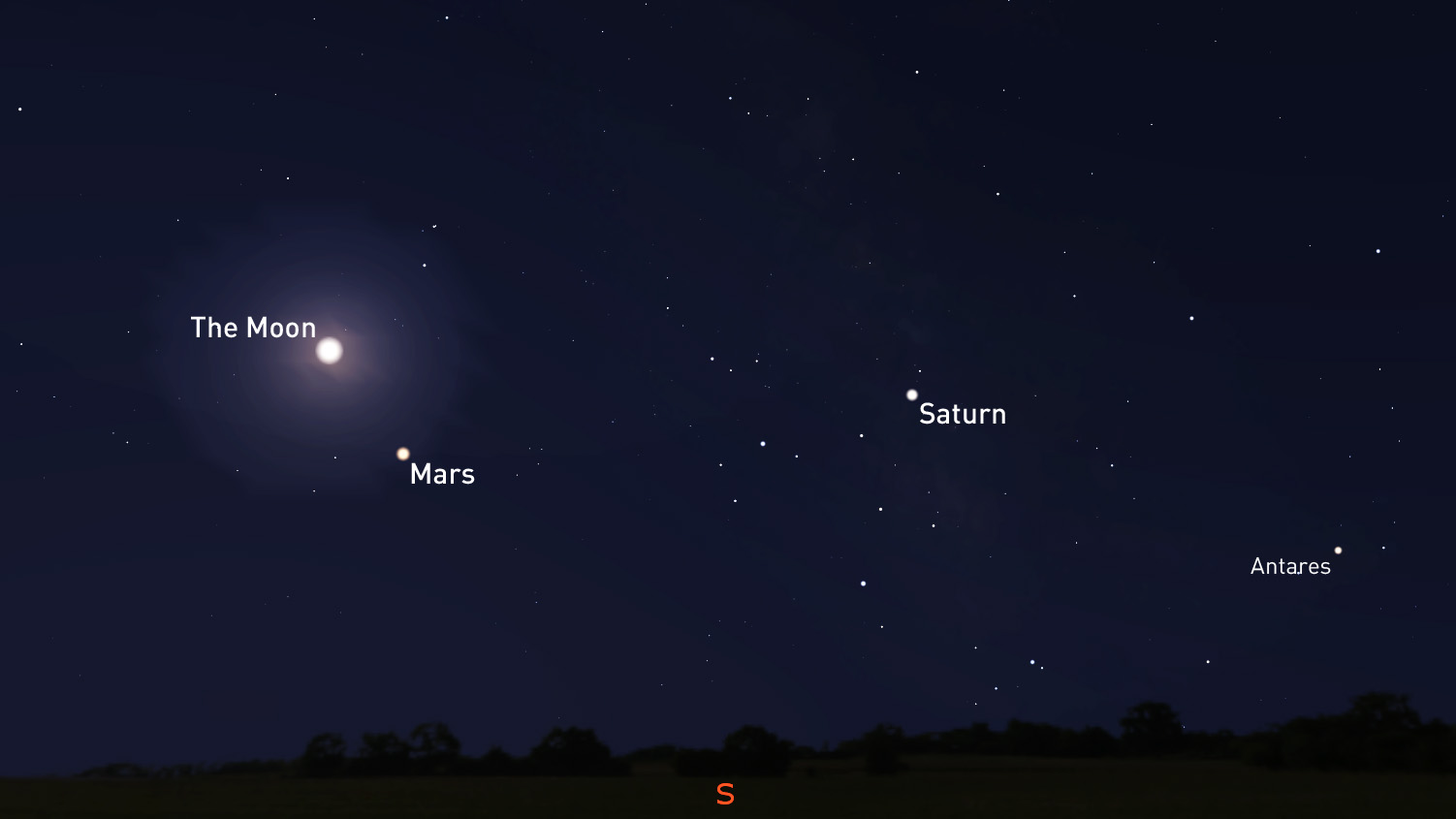 Big, bright Mars, along with the Mini Thunder Moon, on July 27. Still-bright Saturn will be visible off to the right. Credit: Stellarium/Scott Sutherland

'Thunder Moon' is one of the traditional names of the July Full Moon, due to the thunder storms often encountered during this month of the year. It is also known as the Full Buck Moon, as this is the time of year when male deer begin to regrow their antlers.

This particular Thunder Moon is an exceptionally tiny one, making it 2018's 'Apogee Full Moon' - or 'Mini' Moon - the farthest and smallest Full Moon of the year. 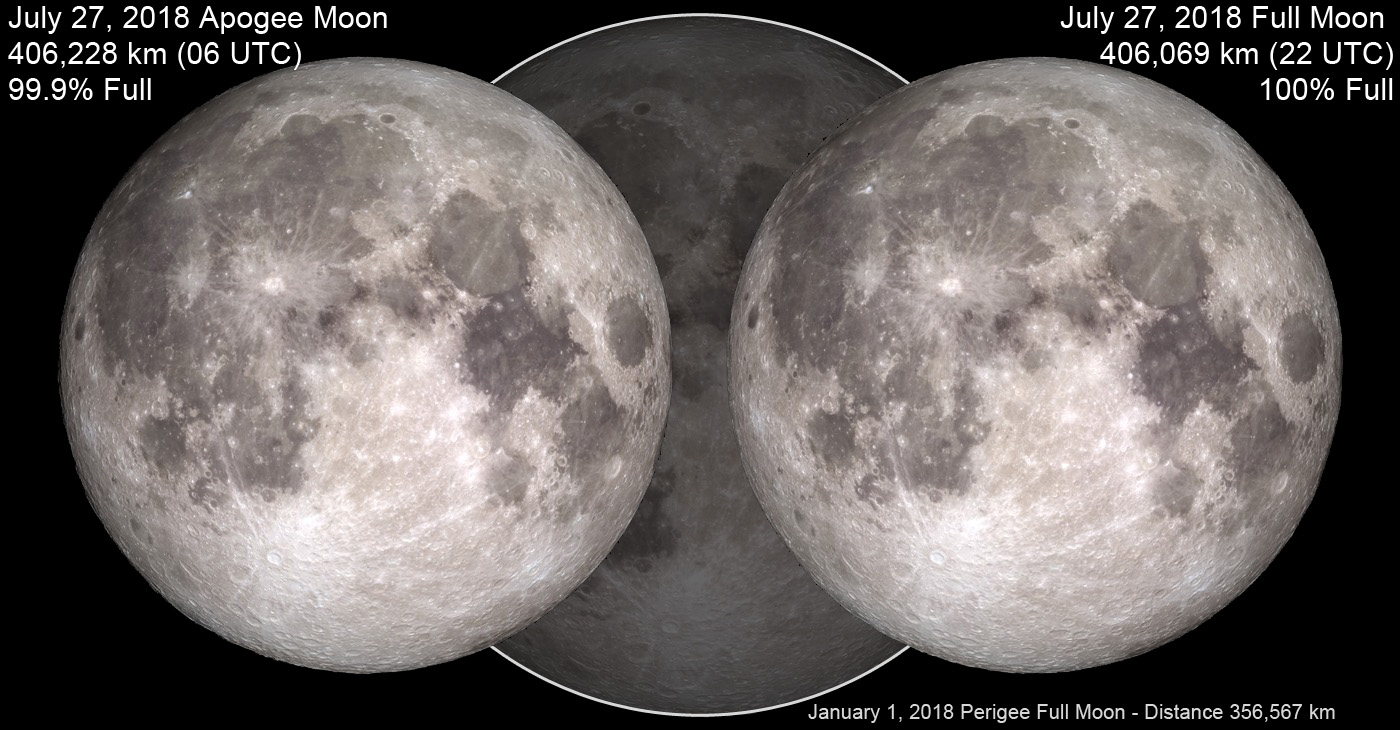 July's Apogee Thunder Moon. On the left, the Moon reaches apogee, at a distance of 406,228 km, at 06 UTC, while it is still 99.9 per cent full. On the right, the Moon reaches 100 per cent full, roughly 16 hours later, but when the Moon is slightly closer to Earth. In the background, the January 1 Perigee Supermoon looms for comparison. Credit: NASA GSVS/Scott Sutherland

Remarkable Thing Two: If you're in the right place in the world, the Moon will actually change colour to match Mars, as it passes straight through the deepest, darkest part of Earth's shadow, turning this into a total lunar eclipse.

The path of the Moon through Earth's shadow on July 27, 2018. Credit: NASA/Scott Sutherland

The timing is such that the only part of Canada that will see any part of this eclipse is the eastern half of the island of Newfoundland, just as the Moon rises that night.

The visibility of the July 27, 2018 Total Lunar Eclipse. Times are in UTC. Credit: Fred Espenak/NASA

It's doubtful anyone will notice it, however, because only the diffuse penumbra will be covering the Moon at that time, which is very difficult to see.

The truly remarkable part of this eclipse, though, is - because this is an Apogee Moon, when the Moon is farthest from Earth in its elliptical orbit, and this is the time when the Moon is travelling the slowest along its orbit, this is going to be the longest total lunar eclipse this century!

This particular total lunar eclipse will last for 103 minutes - 1 hour and 43 minutes of totality, where the Moon will appear completely red. There was a longer one just 18 years ago, on July 19, 2000, which lasted for 106 minutes. Going forward, however, there isn't another total lunar eclipse that's longer than this one for the rest of this century, and in fact, until the year 2123!

For Remarkable Thing Three, read on.

Mars reaches opposition on July 27, but it's not until four nights later - on July 31 - that it reaches its closest point to Earth. This is due to the elliptical shapes of the planets' orbits. 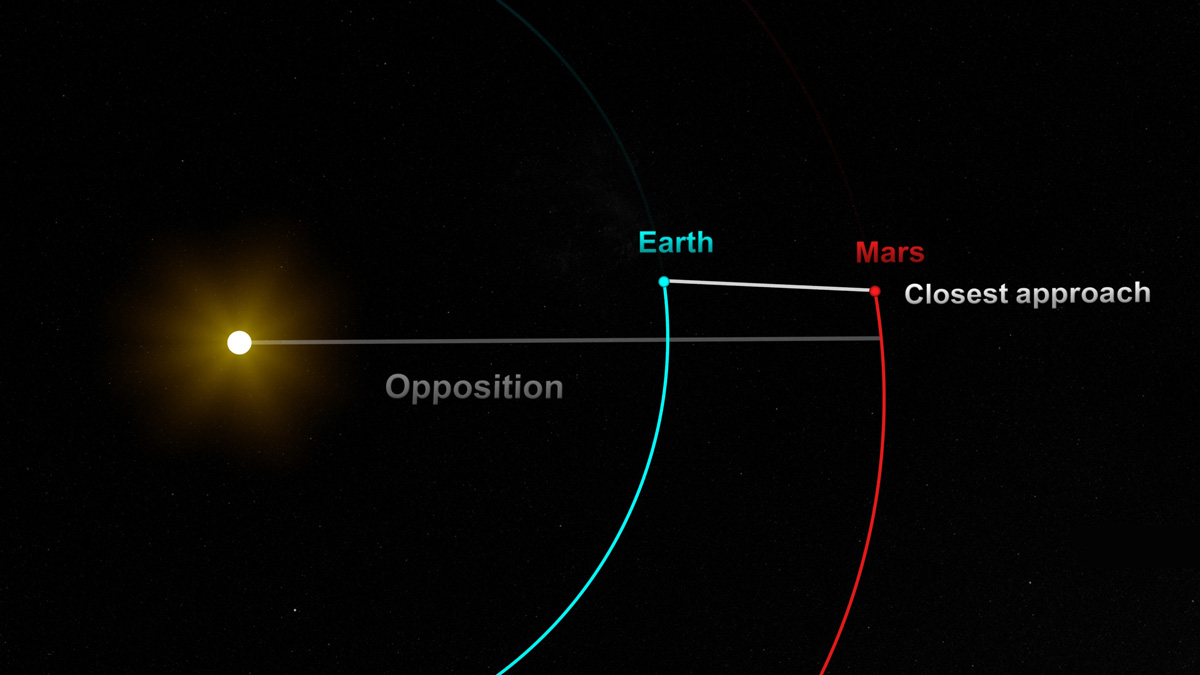 Mars will be only 57.6 million kilometres from Earth on this date.

That's the closest approach of Mars since 2003, and there won't be a closer one until 2035, thus, this is the biggest and brightest Mars we'll see in roughly 32 years! 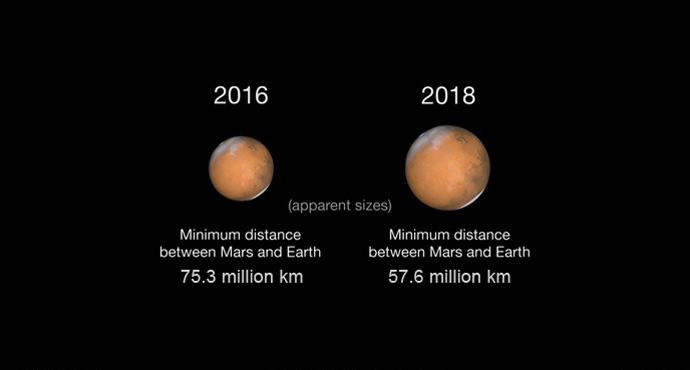 The last "closest since 2003" Mars approach was in 2016. This year, the planet is even closer. Credit: NASA

At this time, Mars' southern hemisphere is in spring, thus by the time it reaches its closest point to Earth, the south polar cap will be more visible, so it's definitely a great time to break out the telescope.

There's a secret Remarkable Thing Three for this event, however you need to be on roughly the opposite side of the planet. The only place in Canada that will see the July 27 Total Lunar Eclipse is the eastern half of the island of Newfoundland, and even there it will only appear as a very slight - possibly imperceptible - shadow on the one edge of the Moon, in the last 20 minutes or so of the event. The best places to view the eclipse are from central Russia, India and Pakistan, the Middle East, and northeastern and southern Africa.

Look for online streaming of the event, on the day it happens!

This will not be as spectacular as last years's August solar eclipse, but if you happen to be in Newfoundland, Canada's far north, in parts of the Arctic, northern Europe and eastern Asia, you have a chance to see a partial solar eclipse on August 11. 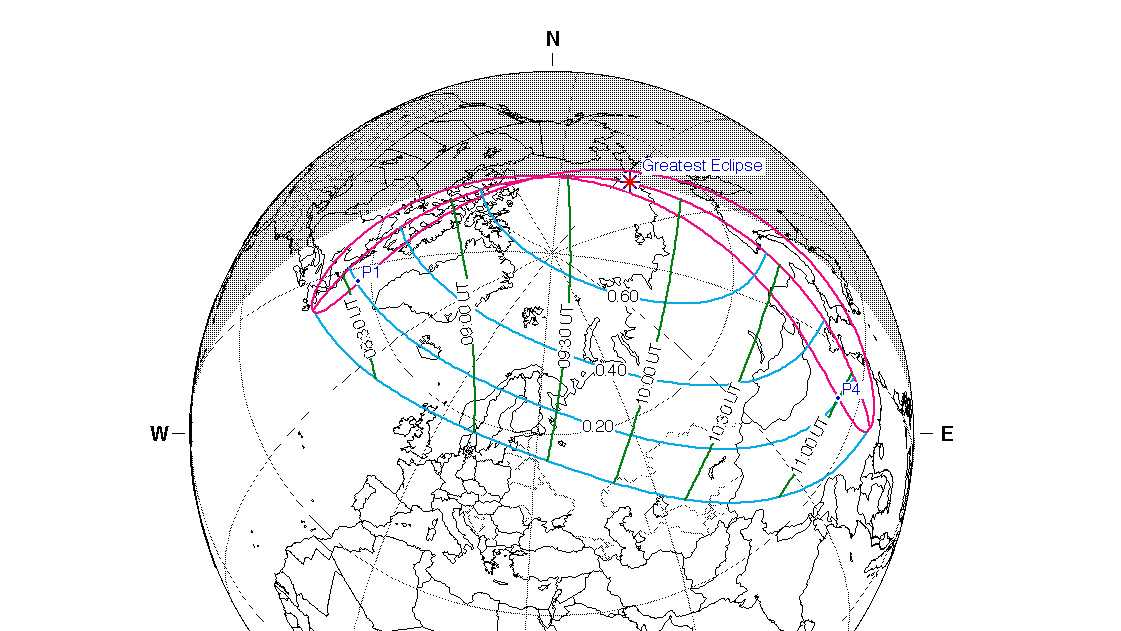 The path of the August 11 partial solar eclipse, as it traces from north of Newfoundland, across the Arctic and into China. Credit: Fred Espenak, NASA Goddard Space Flight Center

The eclipse will be visible from northwestern parts of the Island of Newfoundland, starting at 5:55 a.m. NDT and lasting for roughly 20 minutes, as a tiny slice taken out of the edge of the Sun. Across northern Labrador, the 'slice' will become a bit bigger, and the eclipse will last a bit longer.

Nunavut will see the best of this eclipse, for Canada, though. Communities such as Pond Inlet, Resolute Bay and Eureka will see the Moon block roughly one-third to one-half of the Sun, over the course of about an hour and a half.

Although the eclipse occurs quite early in the morning - starting at 4:41 a.m. in Pond Inlet, and around 3:22 a.m. in Resolute Bay and Eureka, local time - with the Sun up at all times of the day at this time of year, it will still be visible for whomever gets out to watch (remember to use proper eclipse-viewing glasses to look).

Potentially the highlight of the summer season for 2018, the Perseid Meteor Shower - which runs between July 17 to August 24 each year - reaches its peak on the night of August 12-13.

The Perseids are well known as being the best summer meteor shower, for two reasons. 1) It is one of only three yearly meteor showers where its possible to see 100 meteors per hour or more (the other two are in December and January), and 2) the Perseids produce the greatest number of bright fireball meteors, compared to every other meteor shower we know.

The 2018 Perseids promise to put on an excellent show, depending on the weather, due to the fact that the meteors will have very little natural competition in the sky that night. Last year, anyone who had clear skies still had to put up with the bright glare of a fairly bright 'gibbous' Moon, which was full only a few nights before. 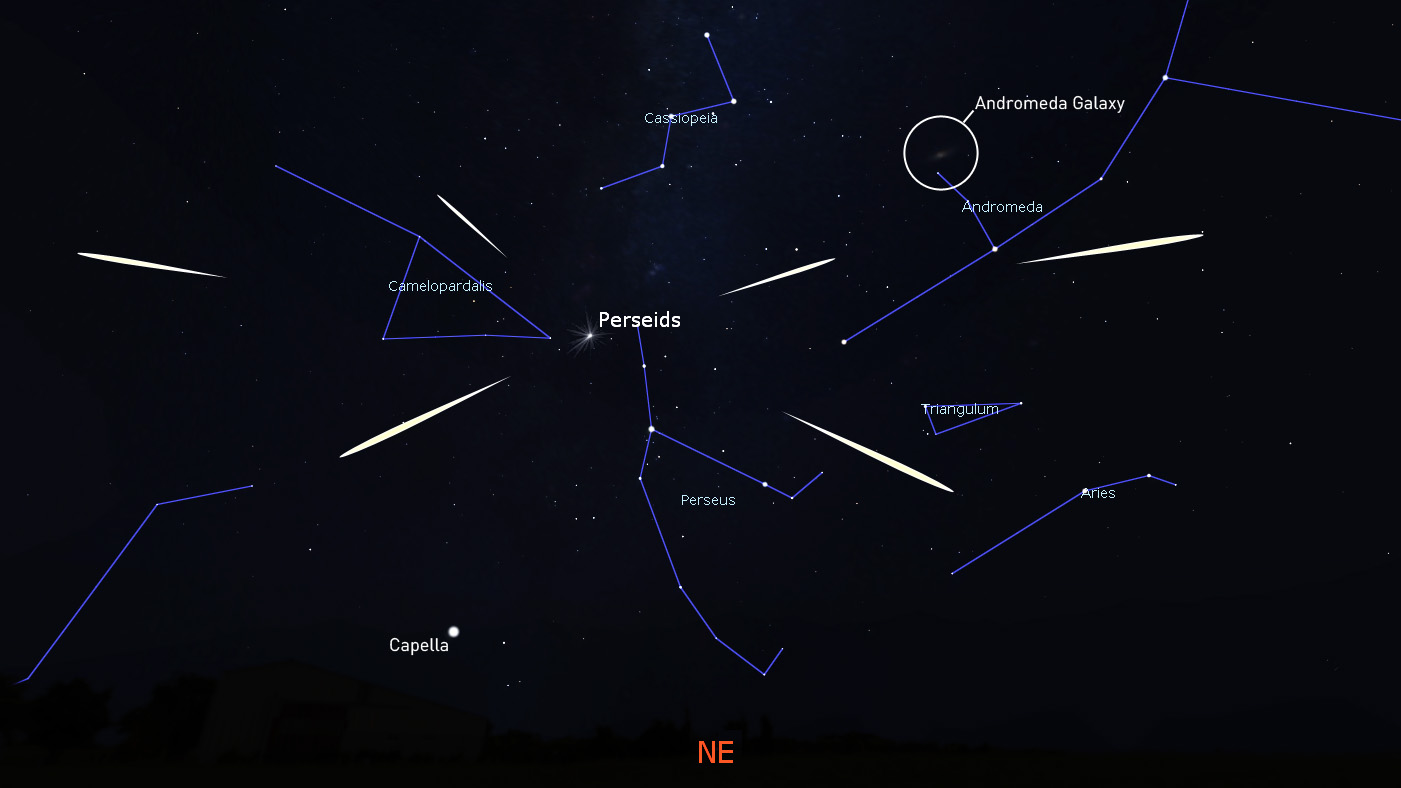 This year, with the New Moon the night before the meteor shower peaks, it will only make a brief appearance, just after sunset, as a thin crescent. That will leave us with a dark sky for the rest of the night, and only city light pollution to contend with for competition.

This summer, early morning skywatchers will have a chance to see the immense cloud of interplanetary dust that encircles the Sun, which manifests in our night sky as "The Zodiacal Light".

The zodiacal light appears as a huge, softly radiant pyramid of white light with its base near the horizon, and its axis centred on the zodiac (or better, the ecliptic). In its brightest parts, it exceeds the luminance of the central Milky Way.

According to Dr. Bishop, event though this phenomenon can be quite bright, it can easily be spoiled by moonlight, haze or light pollution. Also, since it is best viewed just before the twilight of dawn, the inexperienced sometimes confused it for twilight, and thus miss out.

On clear mornings, and under dark, pre-dawn skies, look to the eastern horizon, in the half an hour just before the light of dawn begins to appear on the horizon, from about September 5 to 19. With the Moon going from its last quarter, to New, to first quarter during this time, there's excellent viewing conditions to spot this phenomenon.

On the night of July 28-29, the Delta Aquariids Meteor Shower peaks, producing about 20 meteors per hour. With the Full Moon just the night before, only the brightest meteors will be visible, however.

What have we seen so far?

That's when Saturn is lined up on the exact opposite side of Earth from the Sun, meaning that this is the biggest and brightest we'll see the planet, for all of 2018.

The positions of the planets, out to Saturn, on June 27, 2018, at 13UTC (9 a.m. EDT). The white line shows the alignment of The Sun, Earth and Saturn. Credit: Solar System Scope/Scott Sutherland

You would have already seen Saturn shining in the night sky leading up until then, but on this night, the planet was up all night long - from dusk until dawn - visible as one of the brightest objects, even under the worst light pollution.

Saturn wasn't alone that night, either! Tracking across the sky, along with it, will be the Full Strawberry Moon. 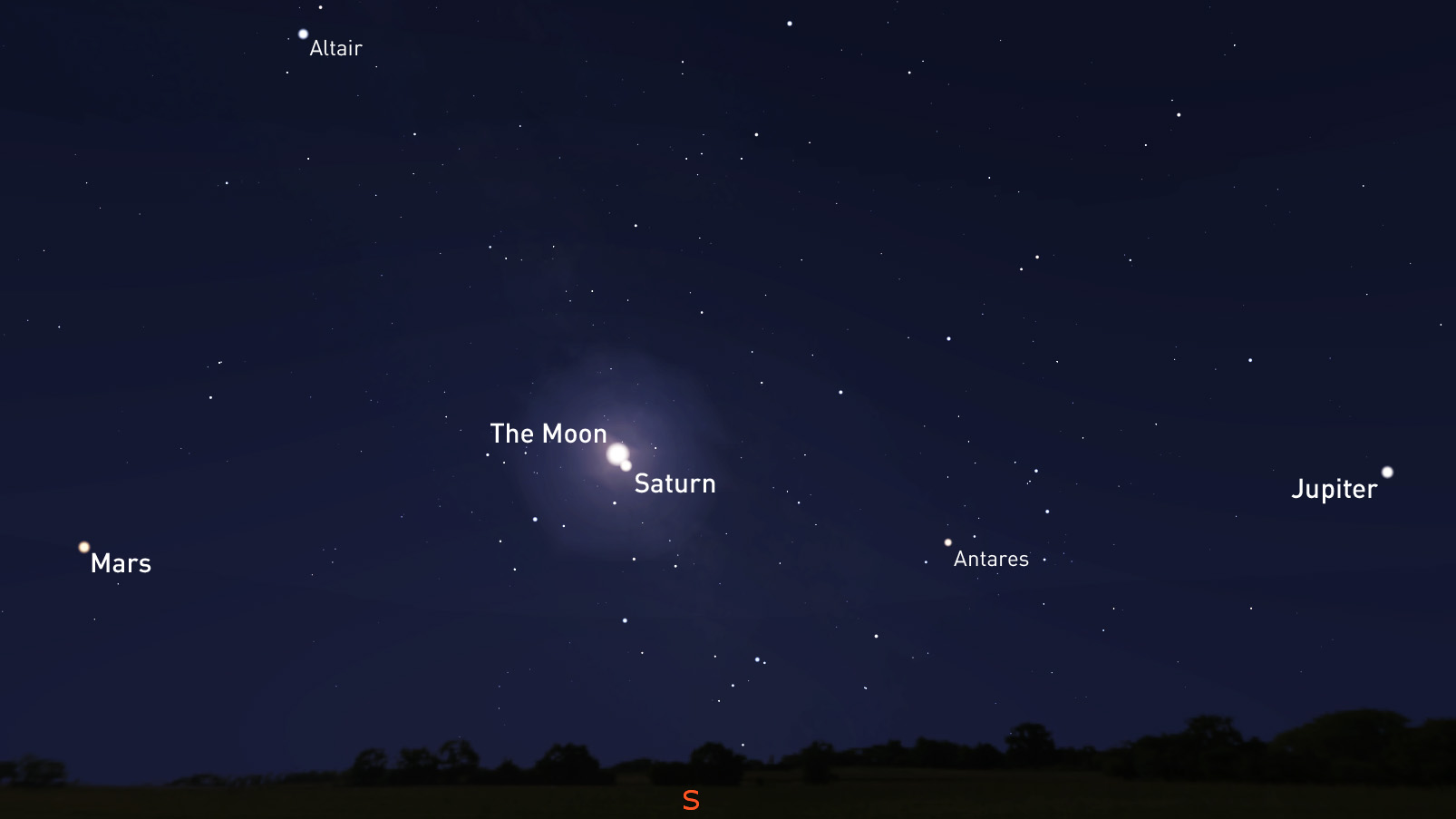 When you saw this pair in the sky, hopefully you took a moment to glance to either side. To the left, you would have seen Mars, on approach to its own opposition (in July), and on the right, you would have seen big, bright Jupiter (with the bright stars Altair and Antares hanging out, as well).

Watch Below: See the Northern Lights dance on the horizon in this time-lapse video

IN A SURPRISING TWIST, CAT SCARES AWAY A FOX
View Gallery Upload Video