Expired News - Astronomers find evidence for giant, Neptune-sized exomoon - The Weather Network
We use cookies on this site to improve your experience as explained in our Cookie Policy. You can reject cookies by changing your browser settings.   READ MORE I ACCEPT

Wednesday, October 3, 2018, 5:07 PM - Astronomers searching for evidence of moons orbiting around planets in other star systems believe they have found their very first candidate, and apparently it is a giant, roughly the size of Neptune!

Alien moons are popular in science fiction. Star Wars had the moons of Yavin IV and Endor. The James Cameron movie Avatar took place on Pandora, the moon of a gas giant in the Alpha Centauri star system.

Making the move from science fiction to science fact has been difficult for astronomers, however. In the real-world search for exoplanets - worlds orbiting around stars other than our own - despite finding over 3,800 confirmed planets and over 5,000 unconfirmed candidates, the one thing that has remained elusive is evidence for an exomoon - a natural satellite orbiting around one of those planets.

The reason for this, simply, is due to their size. Compared to the size and mass of their planets, moons are tiny. 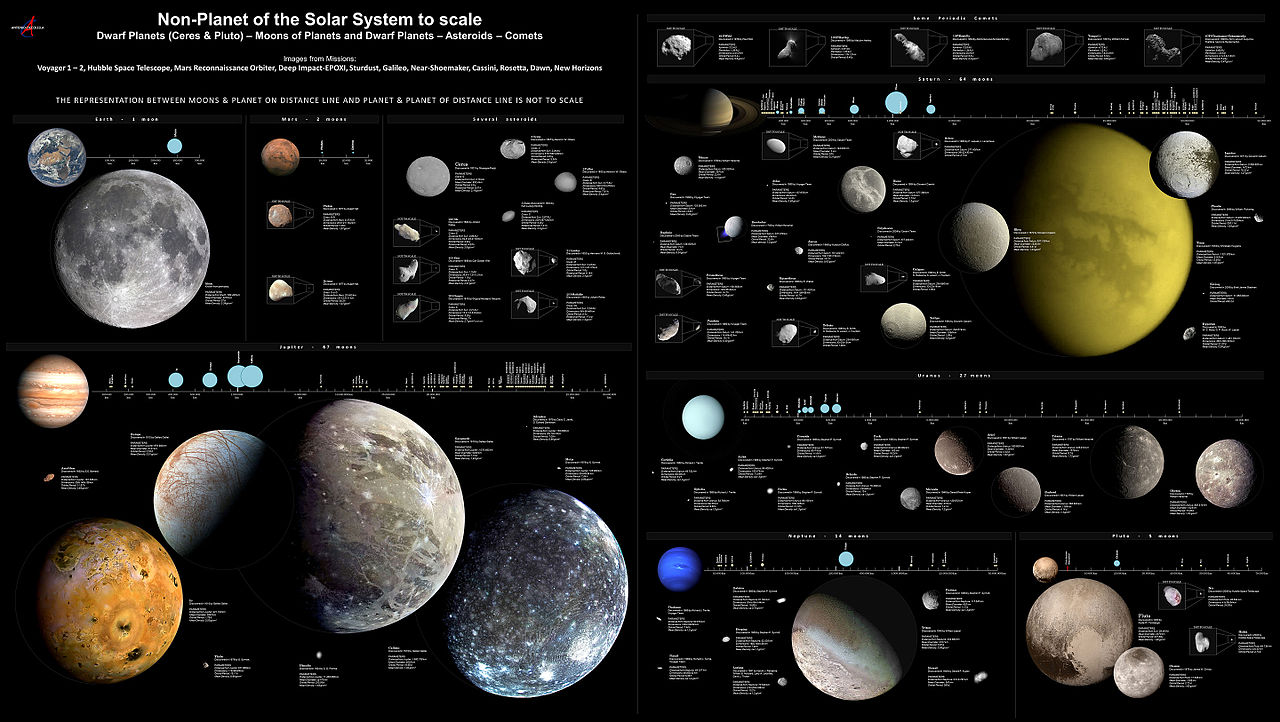 This graphic shows the planets in our own solar system, and the close to 200 known moons that orbit them. Simply based on this example, exomoons should be abundant in the galaxy, yet evidence for them has remained elusive. Credit: Antonio Ciccolella/Wikimedia Commons

It's difficult enough to locate and confirm the existence of planets orbiting around distant stars (although the newly launched and operational TESS, and the upcoming James Webb Space Telescope, will make this easier). Finding moons around those planets is even harder.

In their dedicated search for exomoons, Columbia University astronomers David Kipping and Alex Teachey have scaled up, looking for the largest possible exomoons, around the largest known exoplanets. Now, it seems, their search has paid off.

Roughly 7,000 light years away from us, orbiting around a Sun-like star in the constellation Cygnus, is a single, immense exoplanet, known as Kepler-1625b.

First detected by the Kepler Space Telescope, using the transit-detection method, which records how the star's light dims as the planet passes in front of it, this planet was estimated to be slightly larger than Jupiter, but with around 10 times Jupiter's mass. It was also found to be orbiting its star inside the 'habitable zone' - the region around the star where liquid water could exist on the surface of a rocky planet.

The most remarkable thing about this "warm Jupiter" though, is that it showed tantalizing hints of having an exomoon orbiting it!

Watch Below: David Kipping explains the search for exomoons and the nature of this particular exomoon candidate


"We saw little deviations and wobbles in the light curve that caught our attention," Kipping said in a Hubble press release on Wednesday.

Barely noticeable dips in the Kepler light curves, just to either side of the main lightcurve dip produced by the planet, pointed to the possibility a second body making transit alongside the gas giant, and since the location of the secondary dip changed with each transit of the planet, it indicated that the second body could be orbiting around the planet.

To verify this, Kipping and Teachey booked 40 hours of time on the Hubble Space Telescope, to get a finer, more detailed look at light curves from the Kepler-1625 system.

"A companion moon is the simplest and most natural explanation for the second dip in the light curve and the orbit-timing deviation," Teachey, who is the lead author on the study published in Science Advances this week, said in a Columbia University release. "It was a shocking moment to see that light curve, my heart started beating a little faster and I just kept looking at that signature. But we knew our job was to keep a level head testing every conceivable way in which the data could be tricking us until we were left with no other explanation." 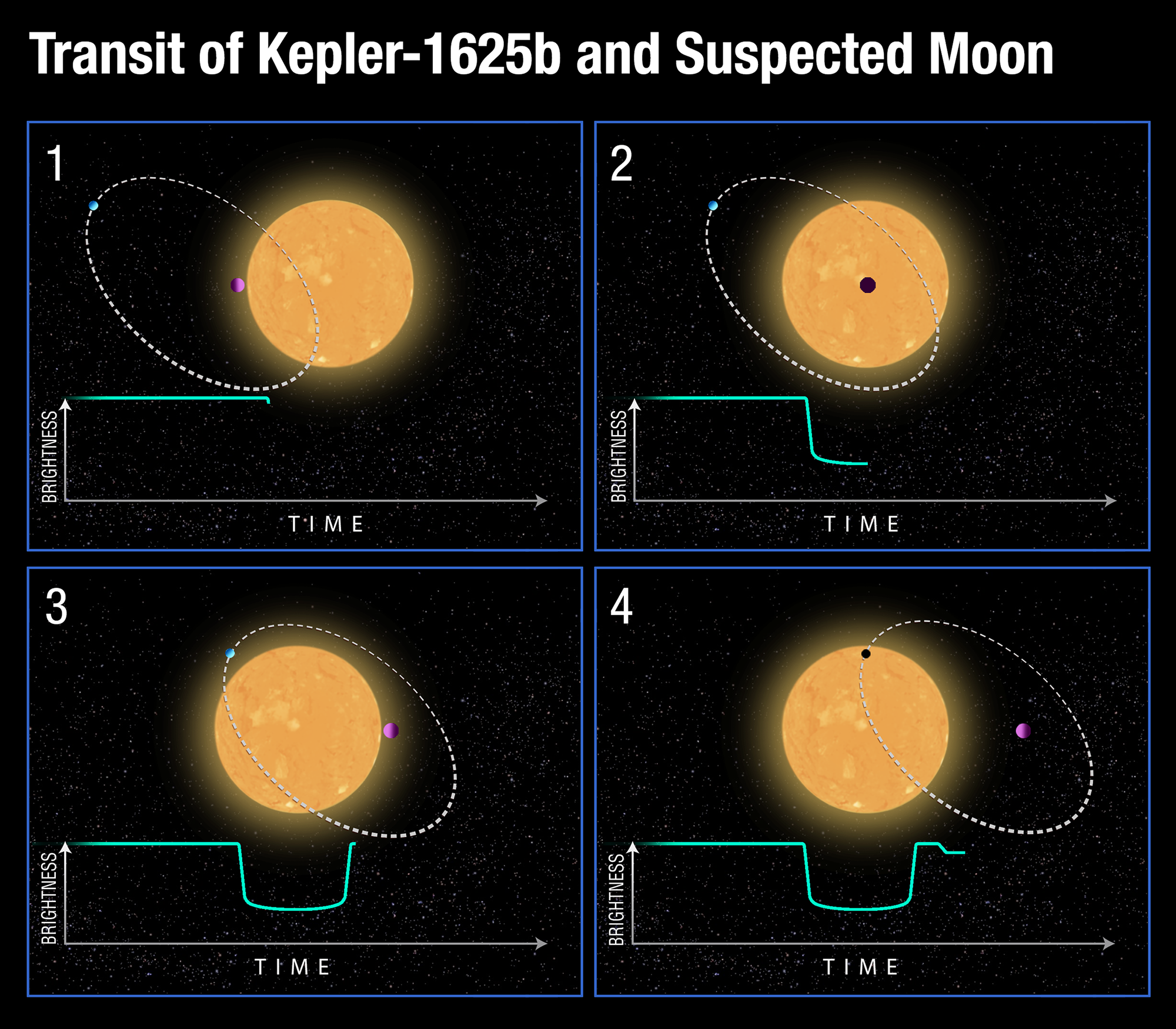 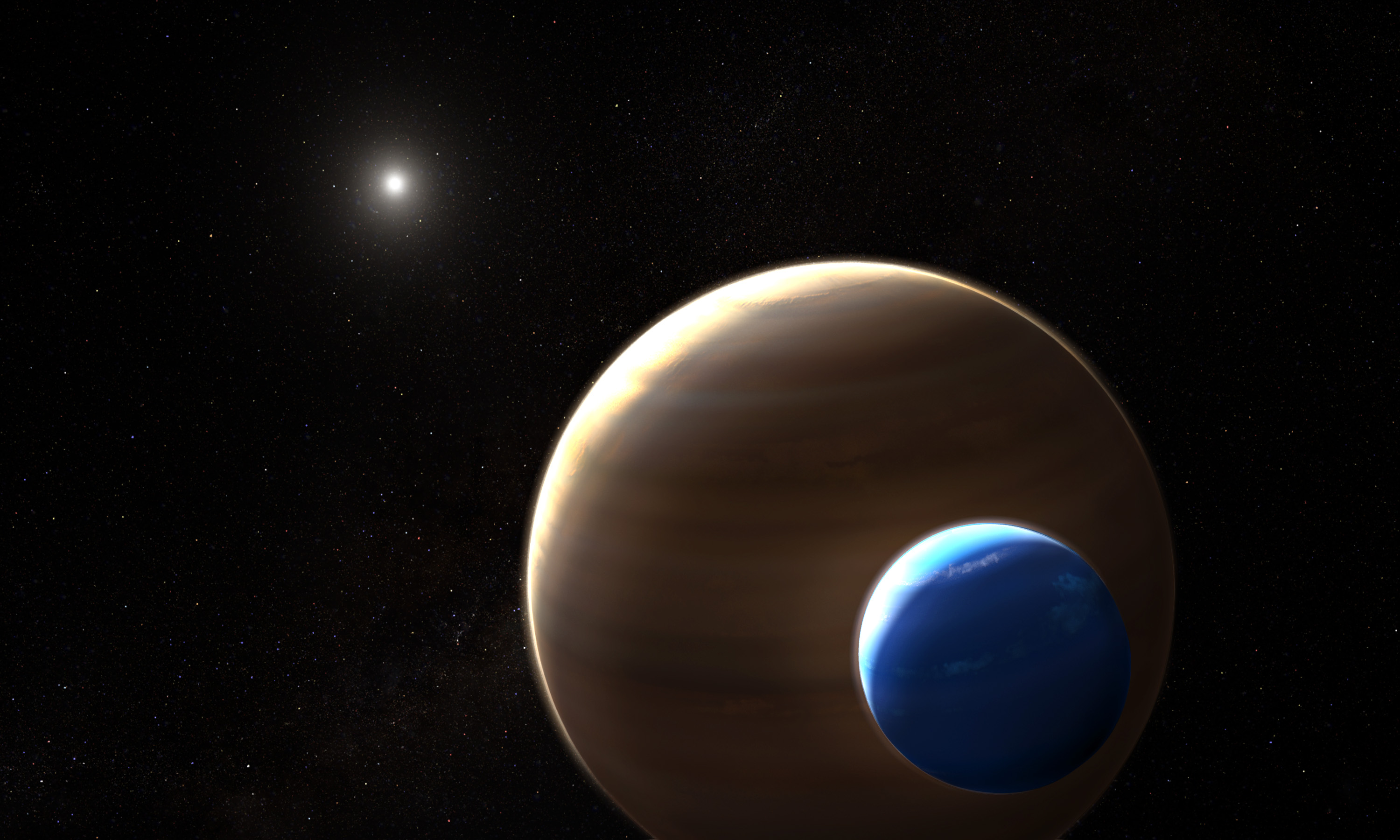 This artist's conception of the Kepler-1625 system shows the immense Jupiter-sized planet with its Neptune-sized moon. Credit: NASA, ESA, and L. Hustak (STScI)

Now, it should be noted that this is - at the moment - simply a candidate exomoon.

Due to the unfortunate timing of the Hubble observations, their time with the telescope ended after the planet transited the star, but before the candidate exomoon could fully complete its own transit. Thus, despite the compelling evidence, it remains unconfirmed.

More observations are needed, to capture the full transit signal of both objects, to actually confirm this discovery.

Even if it is confirmed as the first ever exomoon discovery, there are still questions to be answered, such as how a gas giant came to have a gas giant moon?

The gas giants in our own solar system have rocky and icy moons, but no examples of having gas-giant moons. So, did Kepler-1625b capture its satellite? Did they form together, at the same time? Or is there some currently-unknown collision process for gas giants that can actually produce such a satellite?

"If confirmed by follow-up Hubble observations," said Kipping, "the finding could provide vital clues about the development of planetary systems and may cause experts to revisit theories of how moons form around planets."

RELATED: HOW WILL TESS SPOT ALIEN WORLDS? THE TRANSIT METHOD