Expired News - Latest pics from NASA's New Horizons reveal 'cosmic snowman' - The Weather Network
We use cookies on this site to improve your experience as explained in our Cookie Policy. You can reject cookies by changing your browser settings.   READ MORE I ACCEPT

Wednesday, January 2, 2019, 6:05 PM - New Horizons' distant target, 2014 MU69, aka 'Ultima Thule', has been revealed! It appears to be a 'cosmic snowman', likely produced by some ancient collision, at the very birth of our solar system!

The very first images sent back by NASA's New Horizons spacecraft were blurry, pixelated, and likely did not inspire much, beyond the simple need to see more from this distant encounter. 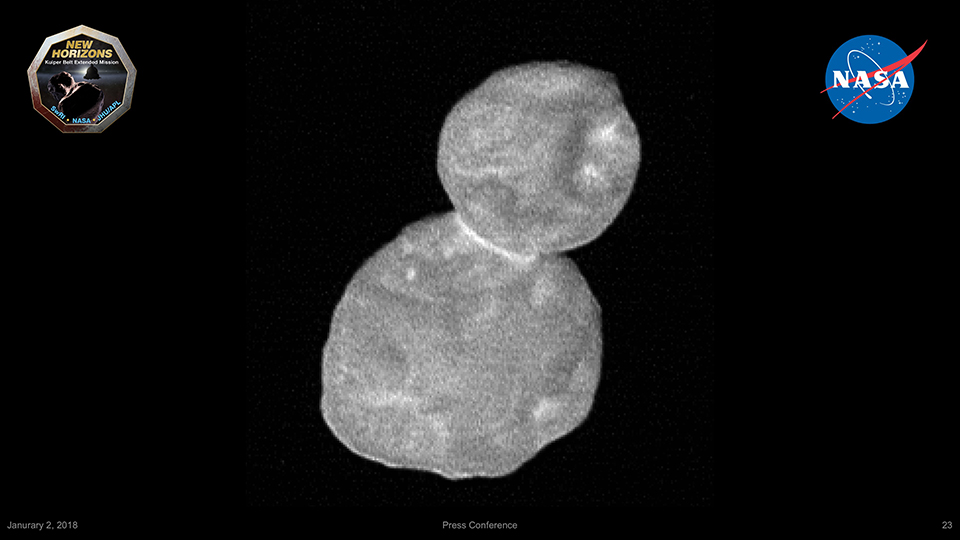 This image taken by New Horizons' Long-Range Reconnaissance Imager (LORRI) is the most detailed of 2014 MU69 so far. The spacecraft captured it at 5:01 UTC on January 1, 2019, at a distance of just 28,000 kilometers. At this resolution, each pixel of the image is 140 meters on a side. Credit: NASA/Johns Hopkins University Applied Physics Laboratory/Southwest Research Institute

So, indeed, as predicted by the mission scientists, 2014 MU69 is what's known as a contact binary. In total, the object is 31 kilometres from one end to the other, with the larger lobe being around 19 km across, and the smaller lobe about 14 km across.

How did an object like this form? According to the scientists, it was probably due to a very slow-motion collision, long ago. 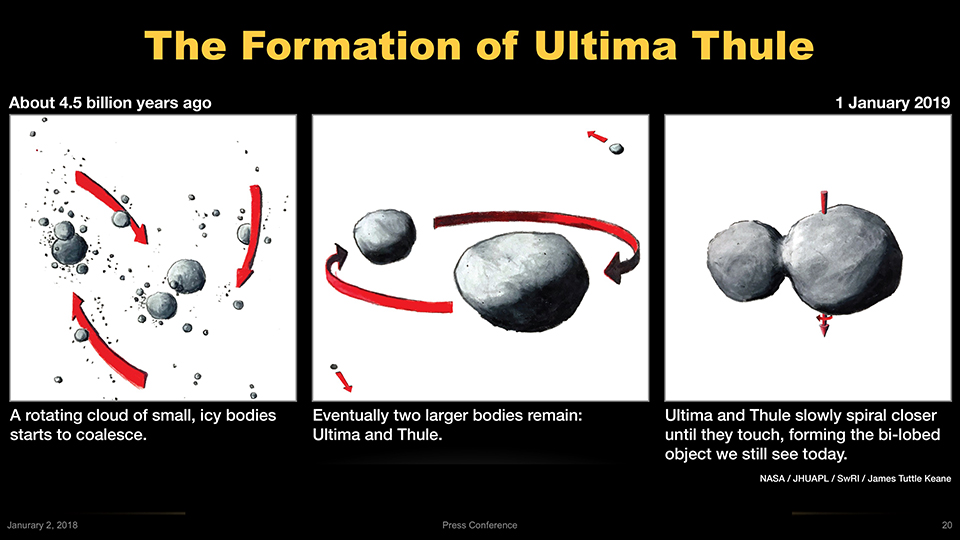 This three-panel drawing depicts the likely scenario for how 2014 MU69 formed, as two different, gravitationally-bound objects formed from solar system debris, and then slowly spiraled in to eventually touch. Credit: NASA/JHUAPL/SwRI/James Tuttle Keane

Comet 67P/Churyumov–Gerasimenko, the target of the European Space Agency's Rosetta mission, is another example of this kind of object, however that is likely where the resemblance between MU69 and Comet 67P ends. These two very likely have much different origin stories.

By combining data from two different cameras on New Horizons, the Multispectral Visible Imaging Camera (MVIC), as well as LORRI, the team also produced a colour photo of MU69!

This is the first color image of 2014 MU69, taken from 137,000 km away, at 4:08 UTC on January 1, 2019. The left image is a combination of near infrared, red and blue channels, taken by the spacecraft's low-resolution Multispectral Visible Imaging Camera (MVIC). The center image is the high-resolution picture snapped by LORRI at the same time. On the right, the color from the MVIC image as been has been overlaid onto the LORRI image, to show the color uniformity of the two lobes. Note the reduced red coloring at the neck of the object. Credit: NASA/JHUAPL/SwRI

Even as good as these images are, this is still just the start. The highest resolution picture, above, was taken at a distance of 28,000 km. It's estimated that New Horizons flew past this distant object at a closest distance of just 3,500 km!

So, not only do we have even higher resolution picture to look forward to, we can also see if NASA's radar imaging of MU69 worked! That's right, as New Horizons passed this object, NASA had beamed radar pulses at it, to bounce off at just the right moment, so that New Horizons would pick up the radar reflections. If this worked, we could get incredibly accurate terrain mapping of MU69's surface features!

WATCH: WE'VE GOT SOME CRUCIAL TIPS FOR WATCHING THE BEST METEOR SHOWER OF THIS WINTER