Out Of This World

Wondering what's going on with the weather, or curious about how climate change is affecting the planet? Keen on learning about the latest news from our robotic explorers in the solar system, or the newest discoveries from the Universe?

What will you find here?

• Catch up on the latest news content, as well as the amazing science of weather phenomena and the latest findings regarding global warming and climate change,
• Learn the fascinating details behind how weather works with the web series Weather Wise,
• Check out what you can expect to see in the night sky each season, from planetary conjunctions to eclipses to meteor showers and other astronomical phenomena, and find out which space missions are the ones to watch for throughout the year,
• Observe sunspots, coronal loops and solar flares with the latest images of the Sun from NASA's Solar Dynamics Observatory, and see what space weather forecasters are seeing from the solar wind and coronal mass ejections, and the geomagnetic storms and auroras they produce here on Earth,
• Track global carbon dioxide content of the atmosphere, via the Keeling Curve, to see how we are altering the climate of our home, and
• Read the most interesting and important feature articles that Scott has written over the years.

On November 26, 2018, NASA's newest Mars mission, the InSight lander, touched down on the surface of the Red Planet.

With the amazing science InSight promises to deliver, including the very first continuous full weather record from the Martian surface, Weather Network meteorologist and science writer Scott Sutherland was on location, at NASA's Jet Propulsion Laboratory, in Pasadena, Calif., to document the landing, and to speak with the scientists and engineers about their hopes and expectations for this - literally - ground-breaking mission.

Winter is here and January's Total Lunar Eclipse is the true star of the season! 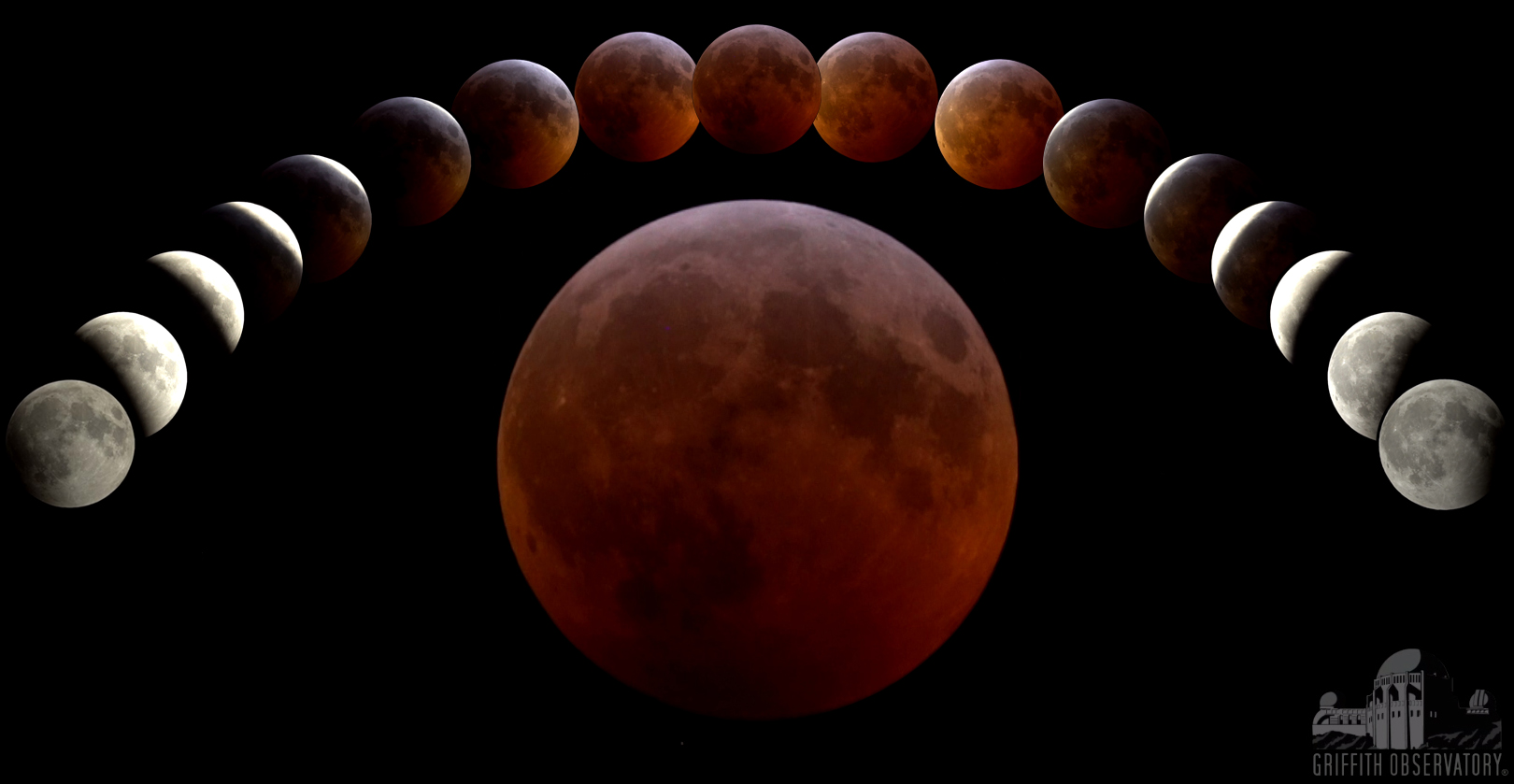 This Year in Space

Looking forward to all the cool stuff going on in space in 2019? It's going to be an exceptionally busy year, so here's your month to month guide of what to watch out for! 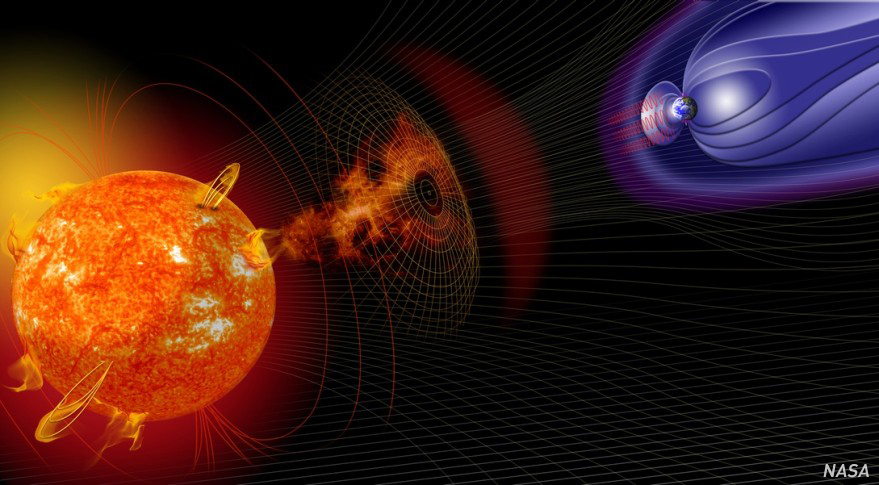 There is a constant stream of particles leaving the surface of the Sun, known as the solar wind, which spreads outward in a rotating 'pin-wheel' pattern of alternating streams of slow, dense material and fast, diffuse material. While the denser streams are the normal flow of the solar wind, the fast-moving streams are emitted by coronal holes, and are appropriately named a coronal hole high speed stream (CH HSS).

Sunspots and coronal holes are interesting to watch, but have little to no impact on Earth, on their own. Most solar flares are so small as to go completely unnoticed (A & B-class), while more powerful ones cause radio blackouts on the day-side of Earth (C, M and X-class), and the strongest X-class flares can even disable or damage orbiting satellites.

CMEs and CH HSSs both have an effect on Earth's geomagnetic field as they sweep past us, potentially sparking geomagnetic storms that often result in bright auroras, and in more extreme cases, can cause issues with satellites in orbit and power grids on the ground.

These are the impacts of space weather.

Satellites in space - such as NASA's Solar Dynamics Observatory (SDO) and NASA/ESA's Solar and Heliospheric Observatory (SOHO) - keep a constant vigil to track activity on and around the Sun, allowing space weather scientists to provide us with warnings of these impacts.

Below are three different views from SDO. Track dark sunspots on the left, see bright magnetic 'coronal loops' and solar flares in the middle view, and watch for dark coronal holes in the Sun's 'atmosphere' on the right.

When coronal mass ejections expand out into space, or when tracking the solar wind, we turn to SOHO's 'coronagraph' views of the space around the Sun, which are shown below (the 'close-up' LASCO C2 view on the left and the wide field LASCO C3 view on the right):

The wispy, bright, straight-line streamers emerging from behind the corongraph disk are streams of solar particles, both from the normal activity of the solar wind, and the fast streams from coronal holes. Coronal mass ejections show up as arcs of material - sometimes bright and sometimes dark - expanding away from the Sun. The points in the background are distant stars, and occasionally, one or more bright planets - Mercury, Venus, Mars, Jupiter or Saturn - will make guest appearances, as bright diamonds that slowly cross the field of view.

When a CME sweeps past Earth, or the planet encounters the leading edge of a CH HSS, the magnetic fields carried along with them not only cause a reaction from the planet's geomagnetic field, but it also results in charged solar particles - usually high-energy electrons - getting caught along the geomagnetic field lines, which then stream down into the upper atmosphere near the poles to produce auroras.

The graph on the left shows the latest geomagnetic activity, as measured by NOAA's Estimated Planetary K-index. The K-index (denoted as Kp) ranges from zero to 9, and each bar in the graph is an average of the past 3 hours of geomagnetic activity. If the Kp value reaches 5 or higher, it is considered to be a geomagnetic storm, ranging from G1 (minor) at Kp=5 to G5 (severe) at Kp=9.

On any given day, auroras can appear in the sky close to the poles, but when there is a geomagnetic storm, it can push aurora activity into lower latitudes. On the right, the globe map reveals the Aurora Forecast for the northern hemisphere, plotting a ring of colour indicating the expected probability of seeing the aurora for any location (no colour = no chance, greens = lower probability, yellow, orange, red = higher probability). When the auroras do shine, they do so in a variety of colours, as the high energy electrons strike different atoms and molecules in the atmosphere, causing them to emit light at different wavelengths. Green is the most common, which is emitted from energized oxygen molecules. Blue is emitted from nitrogen molecules. Red is from free oxygen atoms. When collisions happen with different gases at the same levels, or secondary collisions occur (a high-energy solar electron collides with an atmospheric atom or molecule, kicking out an electron from it, which then goes on to strike another atom or molecule), colours can combine to producing yellows, purples and pinks as well. The Aurora from Yellowknife, NWT

This all-sky camera view, from Yellowknife, Northwest Territories, is provided by the Canadian Space Agency's AuroraMAX website, and features auto-updating views of the sky, every six seconds. Refresh the page to see the latest view, or follow the link to see more (including archived time-lapse videos of each night!).

Note: Most of the above images update, automatically, on their source pages. Simply refresh this page to load the latest images, or click on an image to see more info or to load a larger view (opens in a new tab).

The Keeling Curve, provided by the Scripps Institution of Oceanography, gives the daily reading of atmospheric carbon dioxide, in parts per million (ppm), measured at the top of Mauna Loa, Hawaii.

The plots above are presented for comparing where carbon dioxide (CO2) levels are now, compared to just one year ago (top), to show just how much concentrations have risen since the 1960s (bottom left), and how current levels compare with natural cycles, going back some 800,000 years (bottom right). Air trapped in ice cores reveals that CO2 levels fluctuated over millennia, between around 170 parts per million to just shy of 300 ppm, and with a long-term average at around 220 ppm.

In 2018, the global carbon dioxide concentration peaked at over 411 parts per million, and it will now be decades to centuries before we ever see the yearly minimum dip below 400 ppm again.

Why is this important?

Carbon dioxide is considered to be the 'global climate thermostat' for planet Earth.

What that means is, the abundance of this one greenhouse gas is the primary controller of Earth's surface temperature, and thus its climate. The simple reason behind this is: carbon dioxide is the most abundant temperature-independent greenhouse gas in the atmosphere.

While methane (CH4) is a more potent greenhouse gas - molecule for molecule - than carbon dioxide, there is far less of it in the atmosphere, currently. So, carbon dioxide's contribution to the greenhouse effect far outweighs methane's at this time.

Water vapour is also a more potent greenhouse gas than carbon dioxide, and it is more abundant in the atmosphere, as well. Water vapour cannot be considered to be in control of Earth's climate, however, because of its strong dependence on temperature. If you lower the temperature even a few degrees, water vapour will condense into liquid, and if you cool it further, it will freeze solid. Once water is in liquid or solid form, its contribution to the greenhouse effect is greatly reduced. The water molecules still absorb infrared radiation, but they don't re-radiate that infrared back to the environment as effectively as water vapour.

Carbon dioxide, on the other hand, will remain in gaseous form, and thus remain effective as a greenhouse gas, down to -78.5°C. Thus, throughout the various ice ages the Earth has gone through, it has been largely carbon dioxide that has regulated the planet's overall temperature.

In the roughly 10,000 years before the mid-1800s, when CO2 levels were fairly uniform at around 260-270 ppm, Earth's climate was fairly stable. The greenhouse gases in the air absorbed just enough of the heat Earth radiated out into space, to keep the planet's average temperature fairly steady, at around 15°C. As shown in the graph below, which was compiled by NASA's Goddard Institute for Space Sciences, from 1880 to 2017, the global average temperature has risen by roughly 1.2°C since pre-industrial times.

The entire planet warming up by over one degree, however, and in such a way that the temperature will not go down again by that amount for the foreseeable future, represents an immense amount of energy being invested into our weather and climate systems, and is of great concern to us when it comes to extreme weather events, and their potential impact on human civilization.