News
Editor's Choice
Check for weather alerts in your city, here
Summer is nearly here! As the weather warms and the temptation to spend more time outdoors grows, here are the top astronomical events to look for in our skies over the coming season.
OUT OF THIS WORLD | Earth, Space And The Stuff In Between - a daily journey through weather, space and science with meteorologist/science writer Scott Sutherland

Tuesday, May 30, 2017, 10:41 - Summer is nearly here! As the weather warms and the temptation to spend more time outdoors grows, here are the top astronomical events to look for in our skies over the coming season.

There are plenty of opportunities for stargazing and skywatching during the summer months, but there are some specific events that stand out from the rest - rare ones, ones that happen yearly, but rarely disappoint, and ones that we simply should not miss.

As the Moon and planets move about in our skies, night to night, they can appear in close proximity to one another. Astronomers call these events 'conjunctions'.

In Summer 2017, we have the opportunity to see nine different conjunctions between the Moon and one or more of the brightest planets we see here from Earth.

Given that these are the brightest objects in our night sky, these conjunctions should be visible even from the most light polluted urban centres. Getting out of the city for a better look, is still recommended, though.

From around mid-July to late-August, Earth passes through a stream of dusty, icy debris in space, left behind by a sungrazing comet known as 96P/Machholz. Each time this comet makes a trip around its orbit, the light from the Sun heats up its surface and it emits gases, ice and dust into space.

These bits of the comet continue to orbit around the Sun along the same path, but get spread out along the orbit over the years due to the gravitational influence of the planets. As a result, it forms a stream of material around the Sun that looks like this:

When Earth encounters this stream, the bits of the comet are swept up by the atmosphere, travelling relative speeds of tens to hundreds of thousands of kilometres per hour, and each bit causes a flash in the sky as it compresses and heats up the air in its path.

These flashes are what we call meteors, and as it occurs on a yearly basis, astronomers call this event the Southern Delta Aquariid meteor shower.

On the nights of July 29 and July 30, Earth passes through the densest part of this debris stream, which produces the greatest number of meteors from this event. All told, under prime viewing conditions, with the clearest, darkest skies, the Southern Delta Aquariids deliver about 20 meteors per hour (although the highest numbers favour those parts of the globe further south).

Watch the eastern sky around midnight for when the shower's radiant rises (the point in the sky the meteors appear to radiate from), and the radiant moves around towards the south by dawn. Be sure to look directly up, though, as the meteors can appear in any portion of the sky.

Coinciding with the later part of the Southern Delta Aquariids is one of the best meteor showers of the year - the Perseids.

Both meteor showers occur at roughly the same time of the year, however the Perseid meteor shower has a different source (Comet Swift–Tuttle), it reaches its peak roughly two weeks later than the Delta Aquariids (on the nights of the 12th and 13th of August) and it typically produces far more meteors (over 100 per hour!).

One thing that makes the Perseids such a good meteor shower is that many of the particles that hit the atmosphere are a bit larger than typical comet debris, so this shower produces the greatest number of bright fireball meteors!

According to the RASC Observer's Handbook 2017, it's possible that this year's Perseid Meteor Shower may see an increase in activity, similar to what happened in 2016. However, a waning gibbous Moon rises at just before midnight during the peak, so for the second half of the night, the faintest meteors will tend to be lost in the resulting light pollution. As a result, the hours before midnight will likely be best for viewing this meteor shower.

Get ready for the big event the season!

On Monday, August 21, the Moon will line up with the Sun in Earth's daytime sky, to produce a total solar eclipse. Starting just after 9 a.m. PDT on the west coast, the Moon's shadow will begin tracking across Earth's surface. Locations to the east will see the eclipse start progressively later in the day (as well as taking time zones into account), until the shadow slips off the east coast of the United States at just before 3 p.m. EDT.

The path of totality for this eclipse - where viewers will see the Moon completely cover the disk of the Sun - traces a path from Oregon to South Carolina over a period of about an hour and a half, with each location along the path catching totality for a minimum of 2 minutes (at the start) up to 2 minutes and 41 seconds (at the maximum, through western Missouri, southern Illinois and western Kentucky). From locations in Canada, this will only appear as a partial eclipse, with the Moon covering a different percentage of the Sun's disk depending on the distance from the path of totality.

How to view the Total Solar Eclipse

To watch the total solar eclipse on August 21, check the start, peak and end times for your location.

Below: Tracing the 2017 Solar Eclipse (NASA)

The only special equipment needed to watch the event is a pair of solar viewing glasses or eclipse glasses. Inexpensive ones made from cardstock are available from various retailers, as are more expensive ones with plastic frames. Regardless of the materials the frames are made of, the Mylar filters are the the important part, and observe all safety precautions while viewing the eclipse (see below).

If obtaining eclipse glasses is not an option, a simple pin-hole camera can be constructed, to project an image of the eclipse onto the ground or a wall. By watching the projection of the eclipse (with your back to the Sun), this is a safe way to view the event without eye protection.

Cameras are good for capturing the event, and telescopes and binoculars are useful for either getting a closeup look at the edges of the Moon, the surface of the Sun (during the partial eclipse), or the lines of the solar wind (during totality). However, these are not needed for viewing and may even detract from the experience for first-time viewers. Also, just as the Sun's radiation can damage unprotected eyes, it can also damage unprotected equipment. If you wish to use a camera or telescope, be sure to purchase special Mylar filters to fit over the lens of the camera or to cap the end of the telescope. Special solar-viewing binoculars are also available, which have permanent protective filters.

Regardless of where you watch the eclipse from, be mindful of the weather forecast, as overcast skies across whatever location you choose to view from will ruin the experience, and observe normal precautions for being out in the Sun (such as wearing sunblock, covering your head and bringing along water).

WARNING: Be very careful and do not take chances with your eyesight during this event.

• REMEMBER - Do not look directly at the Sun without the proper eye protection, for any length of time, even during a solar eclipse.
• Use solar viewing glasses or eclipse glasses, and check to ensure that the lenses are intact. Discard any pair where the Mylar lenses are damaged.
• NEVER look at the Sun using an unfiltered telescope or pair of binoculars. This applies even if you are wearing Mylar filter glasses, as the focused sunlight can burn through the filters.
• Do not use normal sunglasses. No matter how dark they are or what their UV rating is, normal sunglasses will not be enough to protect your eyes as you look directly at the Sun.
• #14 welder's glass does offer adequate protection, but be sure that the equipment actually has this rating (some arc-welder equipment may not, leaving the wearer's eyes vulnerable to the Sun's radiation).

Consider attending an organized viewing event, any local observatory or astronomy club, as they should have the proper safety equipment on hand for the public to use. 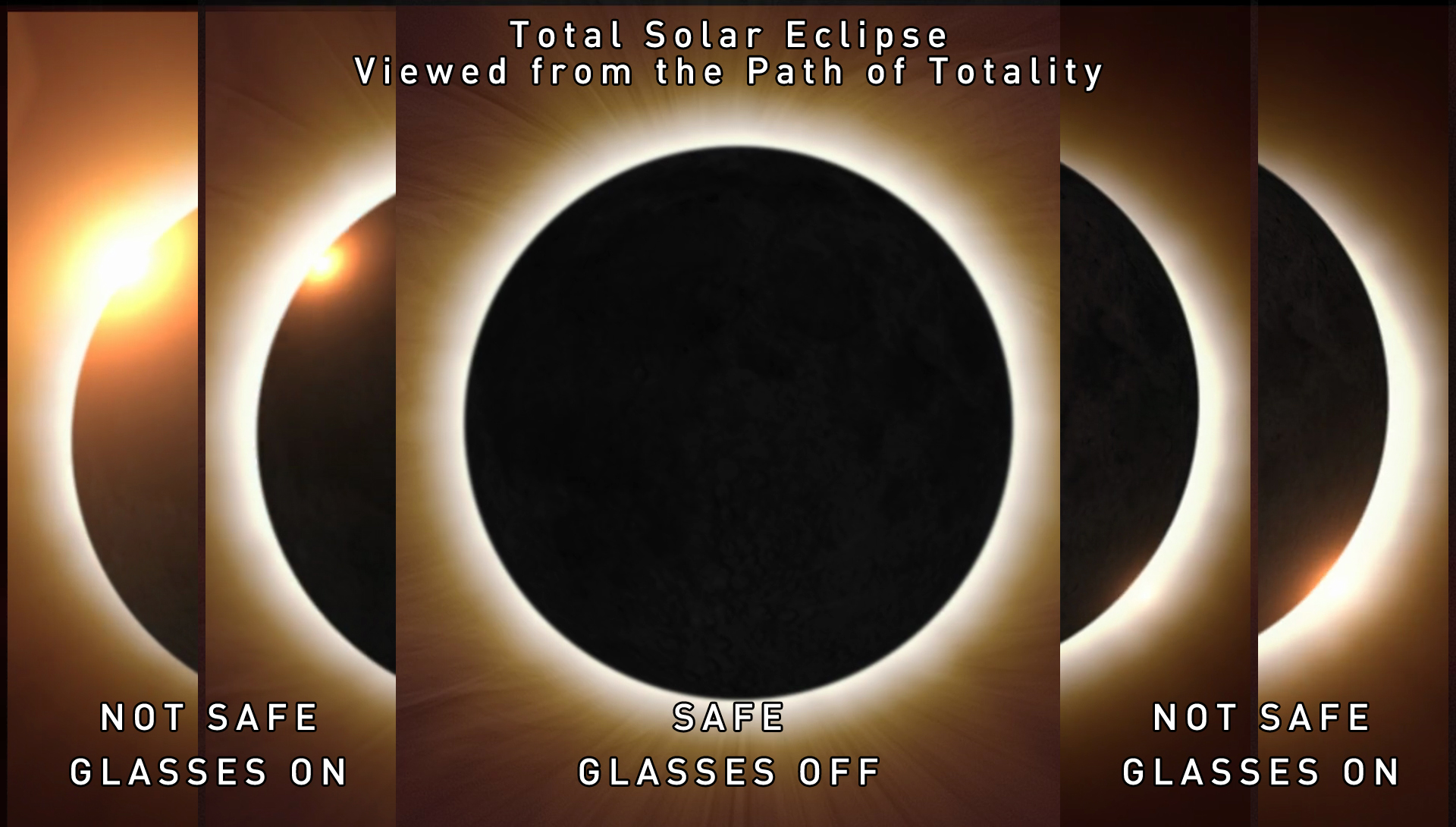 Even the "diamond ring" parts of a solar eclipse, when there is the tiniest sliver of the Sun showing on either side of the Moon, are too dangerous to view without protection. Wait until the Moon completely covers the Sun before removing eye protection, and replace eye protection or look away before the edge of the Sun appears on the other side of the Moon. See NASA's Eye Safety During a Total Solar Eclipse page for a detailed safety guide, and if you do choose to view the total eclipse without eye protection, please exercise extreme caution during this time. Credit: NASA GSVS/Scott Sutherland

Also, if you are viewing from the path of totality, be sure to look around you during those 2+ minutes when the Moon's shadow is passing directly over you! Watch as the Moon plunges the surrounding area into twilight, affecting local plants, wildlife and even the weather, as winds tend to go calm during this period of time!

Watch Below: NASA tracks the 2017 Total Solar Eclipse's path of totality across the United States.