Expired News - Hubble shows universe growing faster than expected - The Weather Network
We use cookies on this site to improve your experience as explained in our Cookie Policy. You can reject cookies by changing your browser settings.   READ MORE I ACCEPT

News
Editor's Choice
Fiona: Difficult cleanup ahead for Atlantic Canada
Intriguing new results from the Hubble Space Telescope show that the Universe is expanding faster than thought, and the latest results from NASA reveal a surprise in Pluto's "twilight zone." It's What's Up In Space!
OUT OF THIS WORLD | What's Up In Space - a weekly look at the biggest news coming down to Earth from space

Thursday, June 2, 2016, 3:51 PM - Intriguing new results from the Hubble Space Telescope show that the Universe is expanding faster than thought, and the latest results from NASA reveal a surprise in Pluto's "twilight zone." It's What's Up In Space!

Some 13.8 billion years ago, minus a few tiny fractions of a second for dark energy kick in, the Universe started expanding at a rapid and accelerating pace. Scientists know about this based on observations of the Cosmic Microwave Background (CMB) and other factors like the derived distances to local stars in the Milky Way, stars and supernovae in nearby galaxies, and supernovae in distant galaxies. All this knowledge has allowed astronomers to calculate what's known as the Hubble Constant - a measure of how quickly the universe is expanding. Each method of calculating the Hubble Constant has an uncertainty associated with it, and new observations and studies are making that uncertainty smaller and smaller, bringing us closer to knowing exactly how fast the Universe is expanding.

Up until now, using measurements of the Cosmic Microwave Background, the closest researchers have come is an uncertainty of around 3 per cent.

A new study, by a team using the Hubble Space Telescope, examined around 2,400 stars belonging to special class of variable star known as Cepheids. Since these stars all behave in the same way, brightening and dimming at a rate that has a direct relationship to how bright they get, astronomers have been able to use them as a cosmic metre-stick. Observe Cepheids in any region of spacetime, near or far, see how fast they pulse, and you then know how bright they are. Compare that brightness to how brightly we see them from Earth, and we can tell how far away they are from us. Also observe supernovae in those same regions of space, record their brightness, and we can then use those as an even longer metre-stick, to judge the distance to even farther regions of space. 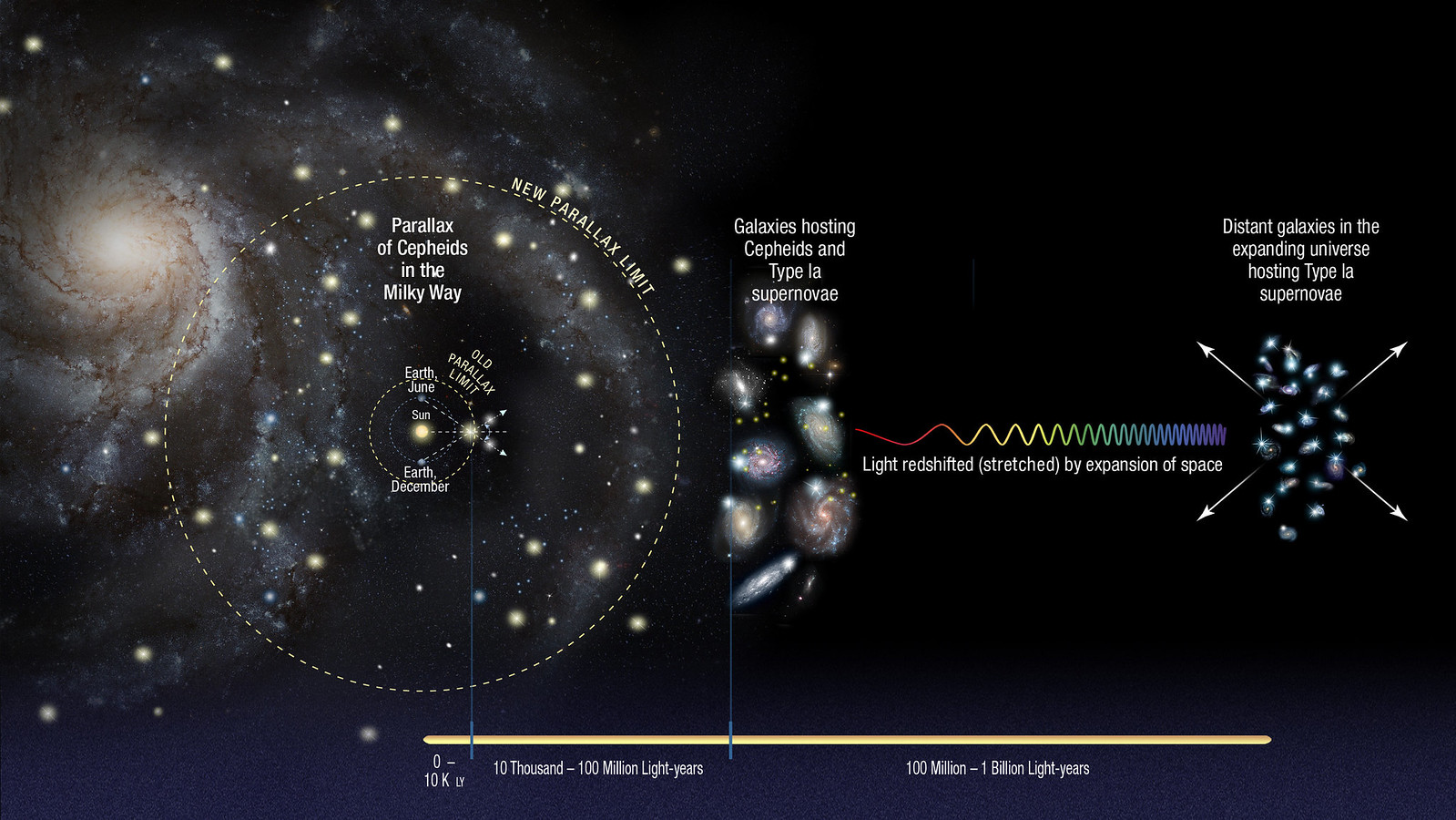 The Cosmic Distance Ladder. Credit: NASA,ESA, A. Feild (STScI), and A. Riess (STScI/JHU)

In this way, the researchers involved in this latest study, some of whom were involved in the 1998 discovery that the Universe's expansion is actually accelerating, obtained very accurate readings of the distances, and managed to calculate the Hubble Constant to be 73.02 ±1.79 kilometres per second per megaparsec (km/s/Mpc), give or take 1.79 km/s/Mpc. A megaparsec is one million parsecs or 3.26 million light-years.

That's an uncertainty of just 2.4 per cent - the best value yet!

The 'problem' with this discovery is that it doesn't agree with previous values of the Hubble Constant, so if it is correct, the universe is actually expanding by somewhere between 5 and 9 per cent faster than previously thought!

What does this mean, and why is it important?

"This surprising finding may be an important clue to understanding those mysterious parts of the Universe that make up 95 per cent of everything and don’t emit light, such as dark energy, dark matter, and dark radiation,' Adam Riess, lead author of the study and senior member of the Science Staff at the Space Telescope Science Institute, said in a Hubble news release.

"We’ve done the world’s best job of decreasing the uncertainty in the measured rate of universal expansion and of accurately assessing the size of this uncertainty," Alex Filippenko, a UC Berkeley professor of astronomy and co-author of the study, told Berkeley News, "yet we find that our measured rate of expansion is probably incompatible with the rate expected from observations of the young universe, suggesting that there’s something important missing in our physical understanding of the Universe."

Has Pluto's twilight zone yielded up a Plutonian cloud?

Images from NASA's New Horizons encounter with Pluto are still filtering in, nearly a year after they were snapped, and the latest to come in are revealing some intriguing details about the distant dwarf planet. 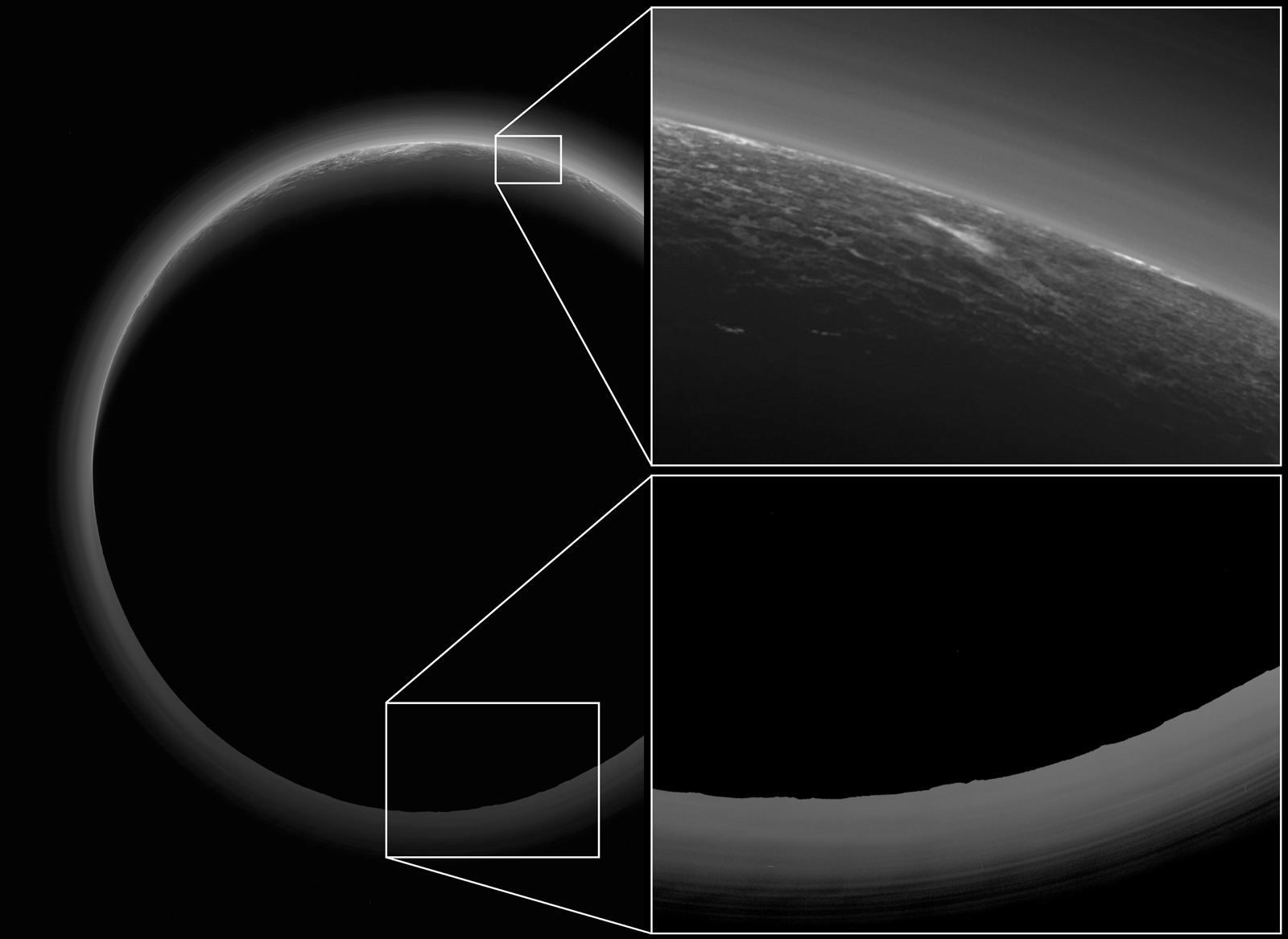 Looking back at Pluto with images like this gives New Horizons scientists information about Pluto’s hazes and surface properties that they can’t get from images taken on approach. The image was obtained by New Horizons’ Ralph/Multispectral Visual Imaging Camera (MVIC) approximately 13,400 miles (21,550 kilometers) from Pluto, about 19 minutes after New Horizons’ closest approach. The image has a resolution of 1,400 feet (430 meters) per pixel. Pluto’s diameter is 1,475 miles (2,374 kilometers). 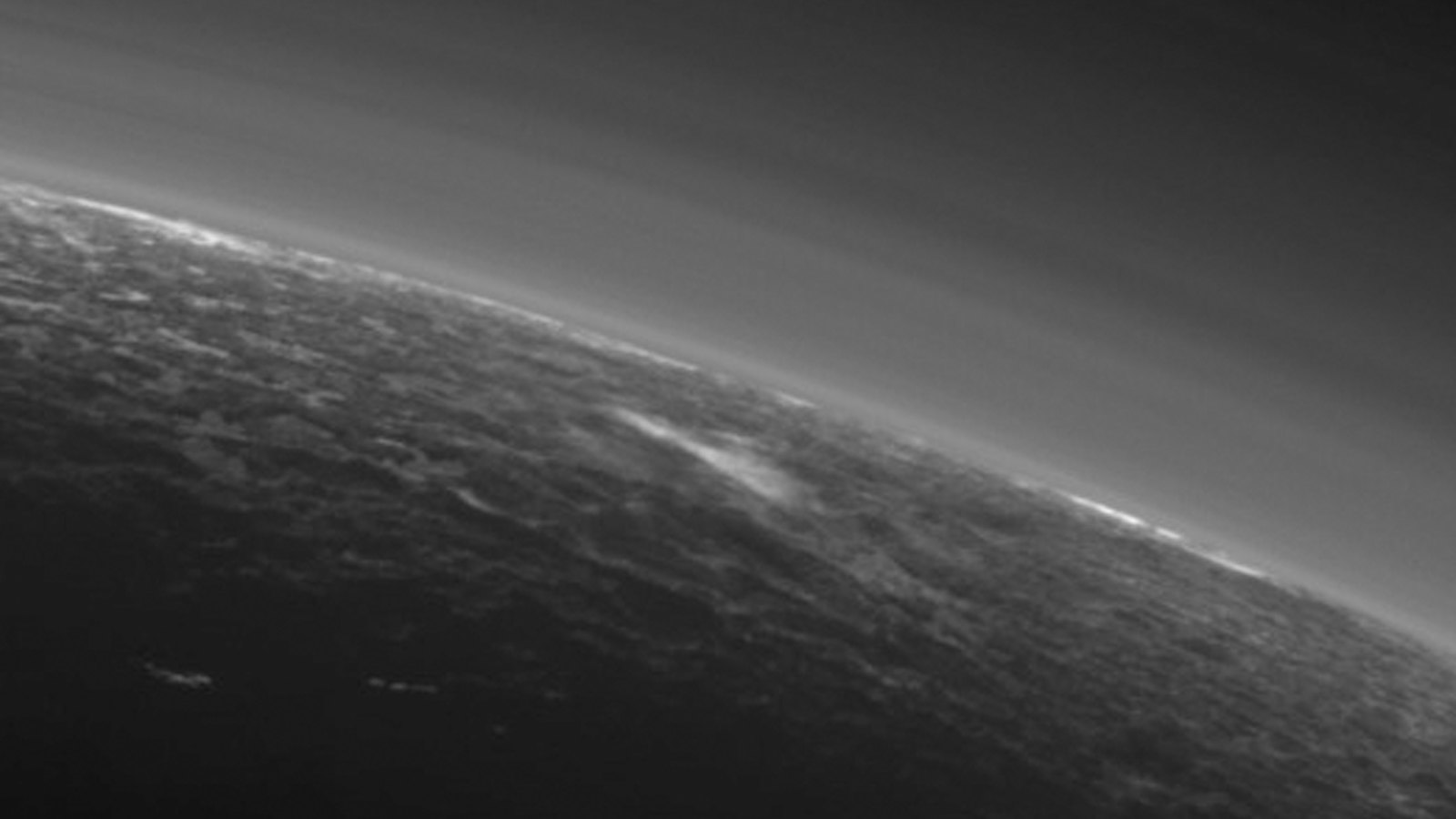 Taking a closer look at the upper inset, we can see what NASA calls "an intriguing bright wisp," right in the middle of the view.

The atmosphere of Pluto, backlit as it is by the Sun, shows obvious layers of haze, and these layers have been visible in previous images downlinked from New Horizons. This could be something different, though, which only computer models have predicted so far - a cloud.

"If so," says NASA, "it would be the only one yet identified in New Horizons imagery."