Expired News - What risk do smaller asteroids pose to Earth? - The Weather Network
We use cookies on this site to improve your experience as explained in our Cookie Policy. You can reject cookies by changing your browser settings.   READ MORE I ACCEPT

What risk do smaller asteroids pose to Earth?

Friday, January 26, 2018, 6:35 PM - A small asteroid passed relatively close to Earth this month, having been discovered just six days earlier. This might sound scary, but it’s unusual that such an object would actually collide with the Earth.

Each year about 50,000 tonnes of extraterrestrial material (rocks and dust) hits our planet. This comes as tiny pieces – even if it all came at once, it would be only slightly larger than the “lorry-sized” asteroid that passed us in January.

But while scientists can readily spot fairly large asteroids greater than about a kilometre across, what risk do such smaller asteroids that may be more difficult to track pose? Should we worry?

It is widely believed the dinosaurs were wiped out 65m years ago by an asteroid impact. The environmental changes that it caused – a rapid rise in atmospheric temperature and global forest fires, followed by plummeting temperatures and acidified ocean waters – were a consequence of the size of the asteroid, probably about 10km across.

This is almost three orders of magnitude larger in diameter, and about 30m times heavier, than the year’s worth of asteroids that hit us today.


The Earth had a brush with an object estimated to be around 20 metres across almost five years ago over Chelyabinsk in Russia. Nobody saw it coming. Spectacular footage of the incoming fireball was recorded by commuters on their way to work, shocked to see the dark February morning lit by something originally thought to be a missile.

The rock exploded in the atmosphere, with many meteorite fragments scattered across the region. The largest piece, of about 600kg, was recovered several months later in an ice covered lake. Although many people were hurt when the object powered its way through the atmosphere, the injuries mostly came from window glass shattered by the atmospheric shock wave it caused.

The inhabitants of the Chelyabinsk region had a lucky escape – no crater was created by the asteroid because it burst into pieces about 30km up in the atmosphere. Luckily, this is the most likely situation for an object that size. 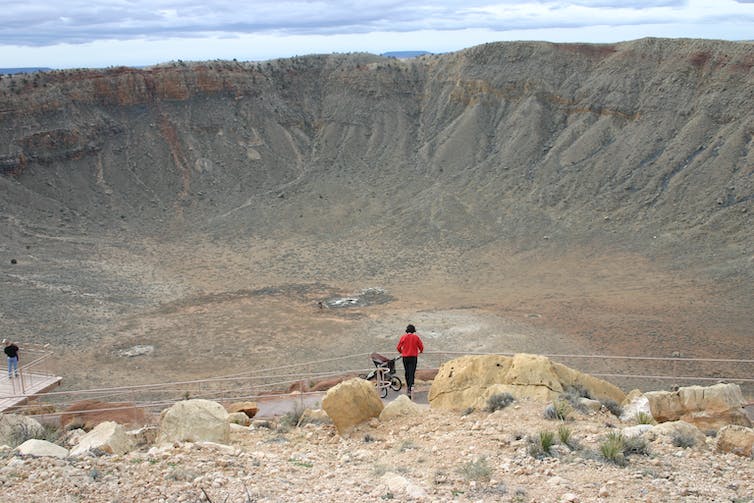 It is not until an asteroid is about 50 metres across that a crater is produced on impact. Even when it is two or three kilometres across – the size of Meteor Crater in Arizona – it is not near large enough to cause destruction on the global scale of the dinosaur extinction event. But it would certainly cause local problems if the impact was in an inhabited area. Imagine the asteroid that created the Meteor Crater – literally and figuratively – hitting central London, Washington or Mumbai.

There are several international observing programmes using automated telescopes specifically dedicated to mapping all “Near Earth Objects”. These are asteroids with a closest approach to the sun of less than 1.3 Astronomical Units – one such unit is the distance between the Earth and the sun. A special watch is kept for “potentially hazardous objects”, which are Near Earth Objects over 150 metres in diameter with orbits that cross that of the Earth.

Fortunately, practically all of these objects are in stable orbits, and are not designated hazardous. Asteroids with sizes down to about five metres across can now be observed. Although, as the Chelyabinsk event illustrated, there are still objects that evade the watchers. Part of the reason that the Chelyabinsk object went undetected, was because it came into the atmosphere at a very low angle from the direction of the sun. But the main reason was the sheer number of such objects, and the relatively short time (about a decade) that we have been actively tracking them.

It is salutary to look at the number of detections of Near Earth Objects. The Minor Planet Center maintains a database of observations, keeping a running total which, by the end of December 2017, stood at over 17,500. A further 28 have already been spotted this month. You can get an idea here where all these objects are relative to the Earth and the sun – I guarantee that you will be more than a little perturbed when you see how surrounded we are by these missiles.

One of the major problems that civilisation has is that while we are becoming incredibly efficient at spotting Near Earth Objects, we still cannot do anything about one that might be on a collision path with the Earth. NASA currently has a project, DART (Double Asteroid Redirection Test), to redirect a threatening asteroid at the preliminary design phase. A spacecraft, about 1.5 metres across, will be aimed to crash into an asteroid (Didymos B) about 140 metres across. Didymos B orbits a primary body, Didymos A. The aim of the project is to change the orbit of Didymos B around its binary partner, while not altering the orbit of Didymos A around the sun.

DART is scheduled for launch in December 2020, intercepting Didymos in October 2022. So we have fewer than five years to wait before we find out whether we can protect our planet from its unruly neighbours.

For now, while small asteroids certainly can pose some danger, the threat is more regional than that posed by larger asteroids. So there is no need (yet) to start stockpiling baked beans and bottled water against our imminent demise by asteroid attack. The 50,000 tonnes of space material that hits Earth each year falls mainly as dust grains less than half a millimetre across. And given that we are all still here (at the time of writing…), it poses no threat to humanity.

VIDEO: An asteroid that looks like a rubber duck: