Expired News - B.C: After largest waves on Earth, prepare for the most snow - The Weather Network
We use cookies on this site to improve your experience as explained in our Cookie Policy. You can reject cookies by changing your browser settings.   READ MORE I ACCEPT

B.C: After largest waves on Earth, prepare for the most snow

Thursday, January 18, 2018, 8:21 PM - A seasonably cool second half of January is in store for British Columbia, with parts of the province expected to receive the most snow on Earth over the next few days.

On top of the impressive snowfall, intense waves in the Pacific Ocean have been lashing the coast of B.C. Thursday -- And you won't believe it, but they were the largest waves in any ocean basin in the world by Thursday morning.

With a strong southwesterly winds aiding to surge the water further inland than normal, beach erosion is possible along the Pacific coast and, going into Friday, Environment Canada is warning of seas "7 to 10 metres subsiding to 7 to 9 early [Thursday] evening and to 4 to 6 late Friday morning."


Lots of safe viewing options as high tide approaches. Would have loved to be visiting #Tofino for this one. #BCstorm @weathernetwork https://t.co/qtC9JLSuoA


As well, Parks Canada issued an extreme wave hazard advisory for the Pacific Rim region including Ucluelet, Tofino and Pacific Rim National Park Reserve, and some beaches have been closed to the public as a precaution.

"The public is being warned to use extreme caution on beaches, shorelines, docks and marinas, and coastal waters from Thursday, January 18th to Saturday, January 20th, 2018," Parks Canada says.

You may find it interesting that both the massive waves and snowfall are, in fact, related.

Most snowfall on the planet falls in B.C.

So, how does this happen? Let’s look into the future using a different kind of map.

Don't be fooled by the psychedelic design—a lot can be inferred from these seemingly pattern-less lines.

Blue over the west coast is representing lower pressure way, way up in the atmosphere, while red signifies higher pressure anomalies.

If you are a weather geek, the dates stamped in the bottom right corner are the highest correlated dates with a similar upper air pattern. Remember any of those dates?

The image above highlights a strong signal for a trough to be firmly planted over the region; subsequently, parts of eastern Canada benefit from the predictable 'wintermission' and well-deserved January thaw. As a side note, for classic Arctic outbreaks over B.C., a more pronounced ridge over Alaska is necessary. That's not the case in this scenario, but we will still be working with relatively cool air over the next several days, often with a chilly northwest flow.

But we can geek out and look at something a little bit more sophisticated. The East Pacific Oscillation (EPO), pressure differences in the eastern Pacific, can also give us glimpses into the future. A positive EPO features lower pressure to the north near Alaska and higher pressure to the south. 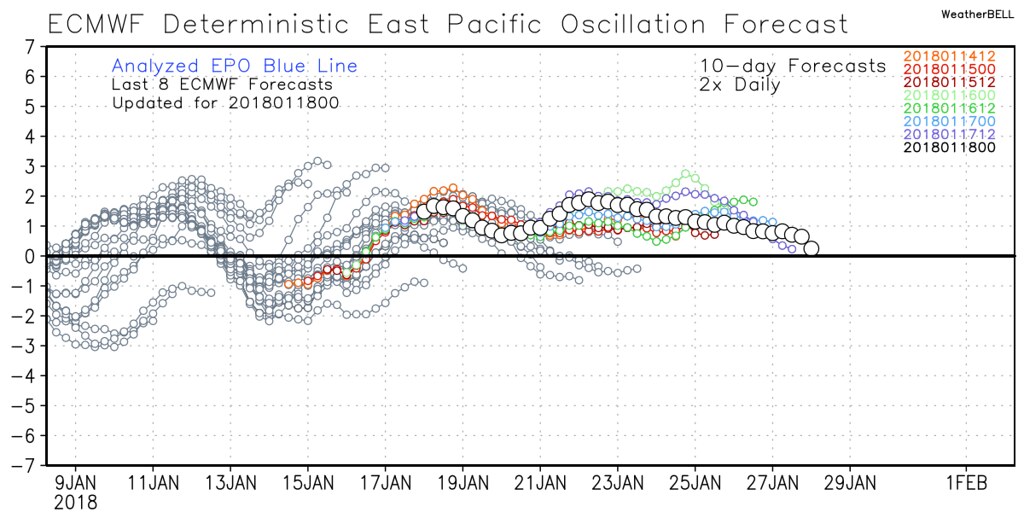 When this EPO is positive (see above), watch out, the storm parade is activated, often accompanied with a semi-permanent low pressure system anchoring over the Gulf of Alaska. If this pattern is sustained, it can often flood the continent with mild Pacific air, and we’ll watch some of these warmer anomalies blossom over the next couple of weeks.

But what about free-falling freezing levels and next significant snow for Vancouver?

The Pacific influence will be a tad too strong over the coming week, but freezing levels will be dropping, albeit slowly.

This winter season is shaping for a strong finish with incredible accumulations in the alpine over the next 7 days, with locally over 50 cm of snowfall.

Colours like the purples shown above indicate the probability of exceeding approximately 100 cm of snow over the next week!

Over the next 5 days, the most snow on the planet will fall in the Pacific Northwest. Accumulations on the Coastal Mountains may approach 200 cm. @weathernetwork pic.twitter.com/96FBYPB63l

The low will slowly weaken and meander just off the coast, giving rounds of showers and mountain snowfall.

With less onshore flow, freezing levels will flirt with North Vancouver and Burnaby Mountain (SFU), possibly just a couple hundred metres above sea level. The storm track remains rather supressed into Washington State and with much weaker storms through the weekend…freezing levels roughly 500 m above the surface.

As illustrated above, our weekend low is more of a nuisance, but it will attempt to drop freezing levels as it weakens off of Vancouver Island.

It remains to be seen if Vancouver will see another significant snowfall this season, but I wouldn’t put away the shovels just yet.

WATCH BELOW: Baby hippo Fiona gets her first taste of snow, reaction is priceless