Expired News - The perils of the Drake Passage - The Weather Network
We use cookies on this site to improve your experience as explained in our Cookie Policy. You can reject cookies by changing your browser settings.   READ MORE I ACCEPT

News
Editor's Choice
Yes, pets can get COVID: Warning signs
The boat ride alone is a rough one ... on some of the roughest seas on Earth.

The perils of the Drake Passage

First things first: I didn’t throw up at the Drake Passage.

Getting to Antarctica used to be one of the great adventures on the planet. Explorers would be gone for months or years as they attempted to make a landing on the icy continent. Simply getting to the southern tip of South America (the usual jumping off point for explorers) was an adventure in itself. Many early Antarctic explorers died on (or getting to) the continent; it was not an adventure for the faint of heart.

Nowadays, the trip is a lot easier, faster and far less people die on the journey. You may feel like you WANT to die (thank you, seasickness), but generally, it’s pretty safe. Civilized almost.

(Ok, yes, we had a hot tub on board and three awesome meals a day).

To get to the Antarctic continent you have to take a ship. There’s no easy way to fly there (and land) and taking a ship may take a little longer, but it’s a far more interesting way to get there. Of course, it also means that you have to take on the full might of the aforementioned passage.

Between the island and most northerly spot of Antarctica, the Western Peninsula, is the stretch of water known as the Drake Passage. This is called “the roughest water in the world” and there’s a good reason for it. A truly titanic amount of water flows between the southern tip of South America (Tierra Del Fuego) and the northern tip of the Antarctic Peninsula. An estimated 140 million cubic metres of water drive through the Passage every second; or the equivalent of 5,000 Amazon Rivers.

This current helps to drive the weather systems that make the Drake almost unendurable at times. As we headed down the Beagle Passage, which, by the way, is named after the ship that Charles Darwin took on his famous voyage, I studied the weather maps that were available on our ship, the Akadmik Ioffee. The first thing that struck me was that the low and high pressure systems spun the opposite direction from what I was used to (thank you Coriolis Effect). The next thing I noticed was that there was very little chance that we were going to be hit with a major storm.

So far so good. The two-day crossing of the passage looked to be relatively calm and that meant that I might not need my sea sickness pills.

Storm systems that move around Antarctica do so in a somewhat unique manner. In the northern part of our planet, the continents of North America and Asia block and move storms north and south as they move eastwards. The reasons for this are complicated and I won’t get into here, but the lack of blocking continents has the opposite effect in the southern ocean. Antarctica is a continent surrounded by an ocean and that means that storms tend to move westwards but aren’t moved north or south. This leads to a situation in which low pressure storms move in an endless conveyor belt around the margin of the continent.

The lack of good data in the area combined with the fast movement of these storms means that you can get very fast changes in the weather.  And no matter how good you think the computer models are at predicting what’s going on, the Drake will surprise you.

On the morning of the second day, I awoke to the sound of dull metallic thuds ringing through the cabin accompanied by a sudden roll and drop of the entire room.  I stumbled out of bed, got dressed and ran to the front of the ship.  The winds were already making the rigging sing and as I forced my way out onto the front deck accompanied by George, I thought that we were getting trounced by a massive storm.  We grabbed the cameras and meteorological gear and got right to work.  We filmed as waves pounded the front of the ship and spray lashed across us.  I heroically held up the anemometer and measured a screaming ... 50 km/h?  I’d had better storms in Southern Ontario!

We “battled” the elements for about an hour until we managed to get a respectable 75 km/h and then headed up to the bridge to talk to the staff. I was sure that this was at least as nasty a storm as they’d seen, but alas, Andrew (the owner of One Ocean Expeditions) told me to come and get him when the windspeed hit 150 km/h. He’d been on board when the winds topped 150 km/h and the seas had built to an insane 15 m. Our storm was light summer shower in comparison.

However, the storm did last quite some time. In fact, it would eventually end up sitting on top of us for four days straight (very unusual for Antarctica), but that’s another story.

What it did manage to do was send me to my bunk for the rest of the day while I tried to keep everything I’d eaten down. It wasn’t so much the huge waves as it was the never ending of it all. Not quite good enough for a mind blowing, Stormhunters storm, but not quite calm enough to not send me reeling. 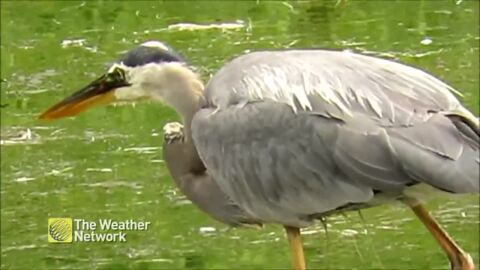