Expired News - Sneaky solar storm lights up the sky over Canada and the US - The Weather Network
We use cookies on this site to improve your experience as explained in our Cookie Policy. You can reject cookies by changing your browser settings.   READ MORE I ACCEPT

News
Editor's Choice
5 vitamins to help kickstart your health in 2022
OUT OF THIS WORLD | Earth, Space and Everything In-Between - a daily journey through weather, space and science with meteorologist/science writer Scott Sutherland

Friday, April 20, 2018, 7:01 PM - Stargazers across Canada and the northern United States were treated to an amazing surprise on Thursday night, when the sky lit up with vibrant auroras during a solar storm that slipped right past space weather forecasters.

During what was supposed to be a quiet night for Earth's geomagnetic field, the kind of night where aurora chasers count themselves lucky to spot a dim display of the Northern Lights, just along the northern horizon, there was a sudden explosion of unexpected activity, directly overhead.

"It went from low on the horizon and due north, to all directions, and over our heads to the south," said Darlene Tanner, who was out chasing auroras with her partner Theresa, in central Alberta, Thursday night. "We didn’t know which way to look!"

According to Tanner, even when the activity temporarily died down, around 2 a.m. MT, it turned into a spectacular pulsating aurora, which they captured on their cameras.

The Aurora Borealis, captured in this long-exposure photograph by Darlene and Theresa Tanner, pulses in the night sky near Stettler, Alberta, early in the morning on April 20, 2018. Click or tap to enlarge. Credit: Team Tanner Photography

After that, Tanner says, there was another explosion of activity, pushing the auroras back over their heads.

Although central Alberta is often treated to amazing views of the auroras - not always as good as last night, but still remarkable - this unexpected outburst was even seen from southwestern Ontario!


An epic Northern Lights display happened last night and what an spectacular show it was! I captured this moment over Lake Huron in Sauble Beach, Ontario on the Bruce Peninsula just before sunrise this morning! #saublebeach #brucepeninsula #northernlights #aurora @stormhour pic.twitter.com/kOZmYytTzX

The view from above, taken by the Suomi NPP satellite as it passed by overhead, shows the extent of the auroras, at least during the early part of Friday morning. 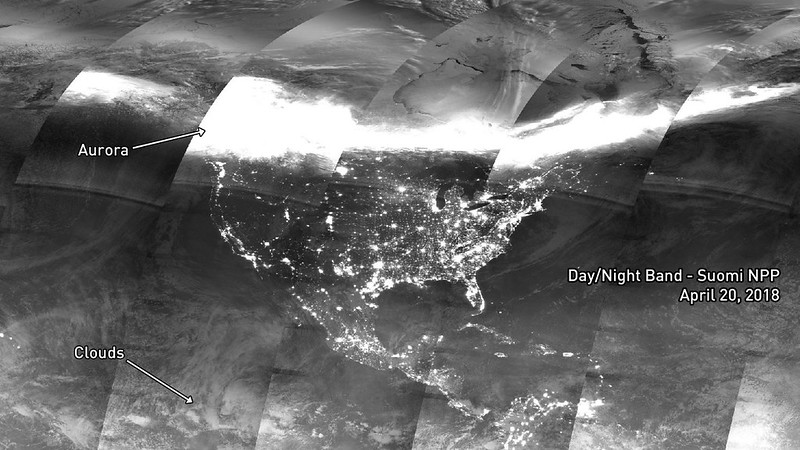 The arc of the aurora is visible along the top of the image. City lights dot the North American continent, and bright cloud-tops can be seen along the bottom of the image. The discontinuities in the image are a function of Suomi NPP's polar orbit, as it circles the planet, snapping pictures of what's below, ever 100 minutes. Click or tap to enlarge. Credit: NASA Worldview/Scott Sutherland

Even as of Thursday morning, forecasters with NOAA's Space Weather Prediction Center weren't expecting anything special to happen. There was some talk of "unsettled conditions" and "isolated active conditions", as Earth was expected to pass from slow-moving to fast-moving streams of the solar wind, the constant flow of charged particles that streams away from the Sun.

The transition between these two parts of the solar wind typically means that Earth encounters what's known as a 'co-rotating interaction region' (CIR). As the solar wind pinwheels around the Sun, the fast-moving particles in a coronal hole high speed stream (CH HSS) run up against the retreating edge of the slower stream, and they 'bunch up' there. This concentration of particles frequently causes "unsettled conditions" with Earth's magnetic field, which can result in some minor auroral displays. 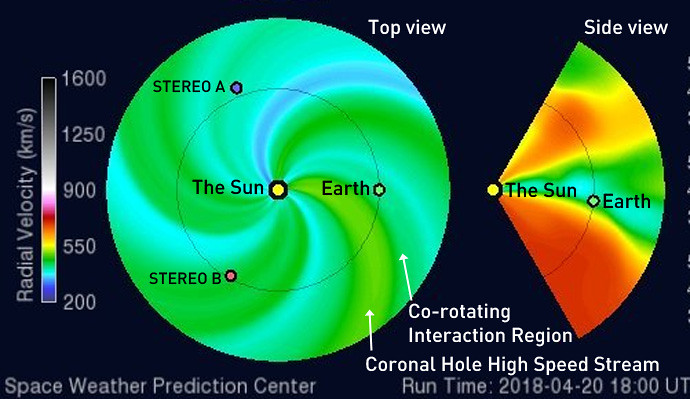 The velocity plot of NOAA's WSA-Enlil solar wind prediction model, from 0600 UTC on April 20, 2018, shows the different flows of charged solar particles Earth is encountering. In the top view, on the left, the blue parts of the flow are slowest, the yellow-green are fastest. Also labelled are the ribbon of the coronal hole high speed stream, and the co-rotating interaction region. Stereo-A and Stereo-B are twin NASA satellites that monitor activity on the far side of the Sun. Credit: NOAA SWPC/Scott Sutherland

What we saw happen, however, was far more than your average "unsettled conditions" or "isolated active conditions".

This was a full-on auroral outburst, due to a G2, or moderate, geomagnetic storm. A geomagnetic storm occurs when either a large concentration of solar particles, or particles from a very fast moving stream, get caught up in Earth's geomagnetic field, and then flow down into the upper atmosphere. There, these high-energy particles smack into air molecules, energizing them, and the air molecules dump that extra energy by producing heat and light. The light is what we see as the auroras.

The best guess for what happened, according to Space Weather Researcher Christian Möstl, is that a slow-moving cloud of solar particles - known as a coronal mass ejection or CME - erupted sometime in the past week, and largely unnoticed by our Sun-observing satellites, this cloud of particles was swept up by the solar wind and carried here to Earth.


I think what happened here is that a slow #solarstorm with favorable southward pointing fields (green lines in plot below) was swept up by a high speed solar wind stream (bottom panel). This seems in agreement with other comments by @TamithaSkov and @halocme! pic.twitter.com/RA1OI6ii1x

When a Colorado Low is developing that's expected to impact the eastern half of Canada and the US Northeast, for instance, weather forecasters have a wealth of data at their disposal to track that storm as it ramps up in the west, and gathers strength during its trek across the US. There may be small, lingering uncertainties about the exact track of the storm when it arrives, and thus where the worst impacts will be, but in general, they have an excellent idea of what to expect.

For space weather forecasters, they get a brief window of opportunity to see a solar storm erupt from the Sun's surface and expand out into space. This expanding cloud of particles is recorded against the bright backdrop of the environment immediately surrounding the Sun, and satellites like SOHO are set up to present their data in the best way possible for forecasters to pick out these events. If the expanding cloud is not particularly large or dense, and especially if it's slow-moving, it just doesn't stand out well against that backdrop. It can be overlooked, and then there's roughly two to three days, sometimes longer, before that cloud finally reaches the satellites we have set up at Lagrange Point 1 - SOHO, ACE, WIND and DSCOVR. It's only then that these satellites can physically detect the presence of the cloud, and determine the concentration of particles, and the strength and orientation of the cloud's magnetic field. By that time, it's only a few hours before the cloud encounters Earth, and produces the resulting geomagnetic storm.

So, imagine being a weather forecaster, trying to predict what that Colorado Low is going to do when it arrives, but all you have is a brief glance at it while it was forming, some 3,000 km off to the west, and then no information at all about what's happening with it until it's practically on your doorstep. And if the development of the Low was sublte enough to be missed, you can suddenly have a major storm show up with absolutely no warning at all. And while weather stations on Earth can cost thousands of dollars, a new space weather station can run into the billions.

Fortunately, the space weather events that can cause significant problems for us - satellite outages and power blackouts - only result from rare events, such as powerful solar flares and immense, fast-moving coronal mass ejections, which are very difficult to miss.

According to space weather forecaster Tamitha Skov, with the fast solar wind following this mini-solar storm encounter, auroras could be visible for the next several days.


Likely yes! Looks like we are being hit by several mini-#solarstorms in succession, followed by some fast #solar wind. This means we will have a period of extended storming over the next several days. We may reach G2 level very soon (only a tiny chance for a G3). Expect #aurora! https://t.co/Lgh2Gw7Jwg

So, if you go out to see the Lyrid meteor shower this weekend, keep an eye out for the auroras as well!

Watch Below: Forecasting auroras - Is it something that's even possible?