Expired News - Canadian space laser pings asteroid that may threaten Earth - The Weather Network
We use cookies on this site to improve your experience as explained in our Cookie Policy. You can reject cookies by changing your browser settings.   READ MORE I ACCEPT

Wednesday, December 5, 2018, 5:43 PM - With NASA's OSIRIS-REx spacecraft finally arriving at Bennu, a Canadian laser is now going to work mapping the immense asteroid, beginning a mission that may, one day, help us to save the world.

On Monday, December 3, after over two years, and travelling a distance of more than 2 billion kilometres through space, the OSIRIS-REx spacecraft finally reached its destination - a large asteroid known as 101955 Bennu.

This isn't a landing, like NASA's InSight mission, which set down on Mars' Elysium Planitia on November 26. Instead, OSIRIS-REx - short for Origins, Spectral Interpretation, Resource Identification, Security - Regolith Explorer - has pulled up and matched speed with asteroid Bennu, at a distance of just 19 kilometres away from it.

Now, as it gives NASA their first close-up look at this near-Earth asteroid, the spacecraft is beginning to map its surface features in detail using a Canadian-built laser.


Now that I’ve arrived, it’s time to get this asteroid mapped.

For the first time today I’m using OLA, my laser altimeter from @CSA. OLA’s laser ranging data will be used to make 3D maps of Bennu ... giving us an understanding of the asteroid’s shape: https://t.co/2rKpv6Myw2 pic.twitter.com/fFtXlGPOIg

Over the next year, OSIRIS-REx will make closer flybys of Bennu's poles, and eventually approaches close enough to collect a sample of the asteroid's surface, to return to us, here on Earth.

The approach of OSIRIS-REx to Bennu, from 2.2 million km on August 17, 2018 to just 65 km on November 27. Credits: NASA's Goddard Space Flight Center/University of Arizona

OLA, which was provided for the mission by the Canadian Space Agency, is essentially a laser range-finder. It works the same as radar, but instead of bouncing radio waves off the target, it uses laser light.

As Bennu rotates underneath the spacecraft, OLA sweeps the surface with its two lasers, and records the time the laser light takes to cover the distance to the target and back. Since the speed of the laser light is constant, the OLA science team can use these timing measurements to get the exact distance between the spacecraft and the asteroid surface, which will allow them to construct a complete 3D map of the asteroid's features.

The scans from OLA are so fine that the resulting map will have a resolution of about 7 centimetres per pixel, which will be good enough to pick out individual stones on the asteroid's surface! 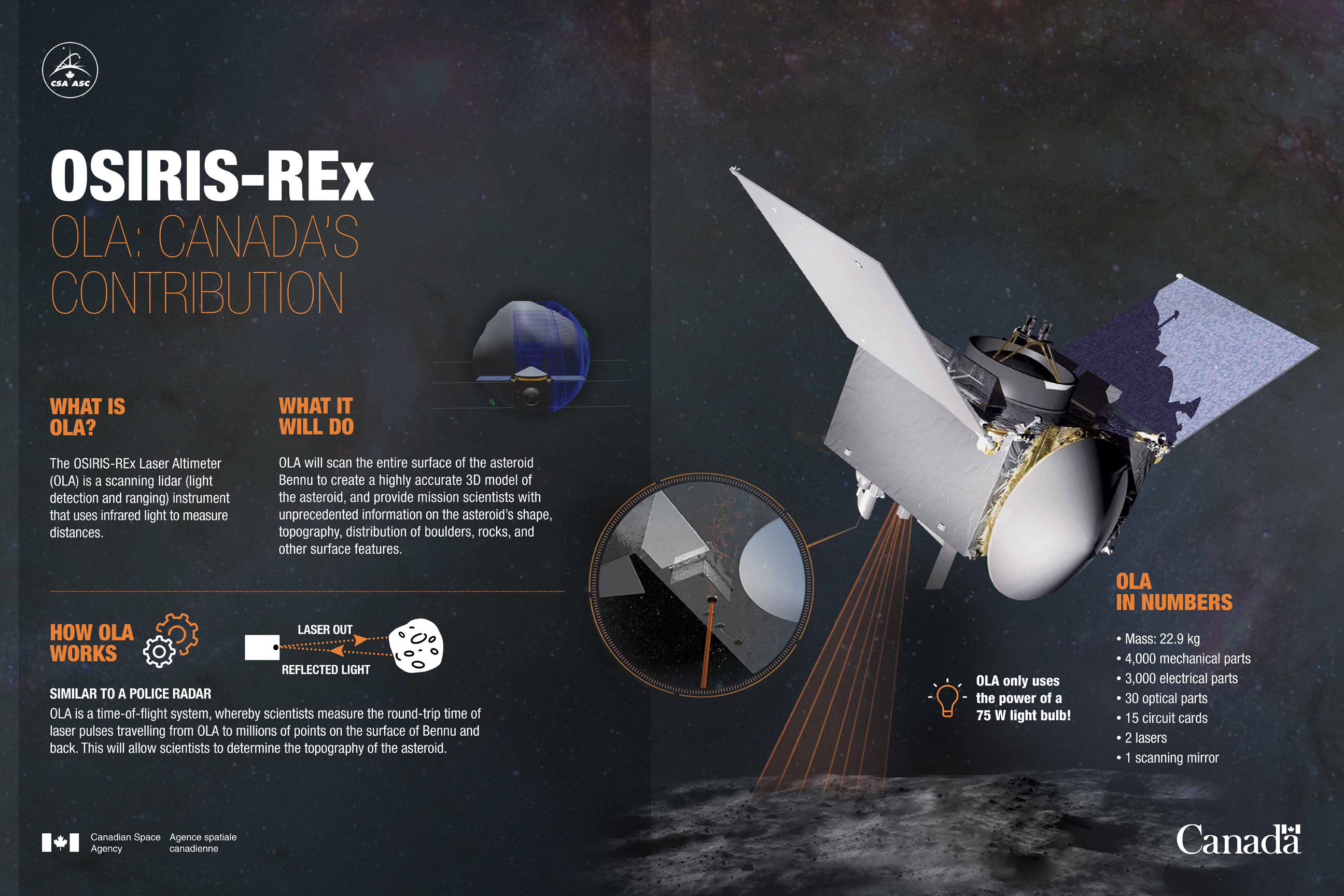 CLICK TO ENLARGE. A Canadian laser will make a 3D map of an asteroid and sleuth out the best sample site for NASA's OSIRIS-REx mission. Credit: Canadian Space Agency

As shown in the graphic above, these are not high-intensity lasers. In total, the instrument uses power equivalent of a 75W light bulb! This matters more than you might think. Read on, below, for why.

This part of the mission wasn't only provided by the Canadian Space Agency. It is being run by Canadian scientists, as well!

The lead scientist for OLA is Dr. Michael Daly of York University, with co-deputy instrument scientists Dr. Catherine Johnson, from the University of British Columbia, and Dr. Jeff Seabrook, who is also from York University.

WHY GO ALL THE WAY TO BENNU?

If there's one object out in space that has simultaneously sparked the most interest from scientists, and inspired the most breathless, over-hyped headlines in the tabloids, it's asteroid Bennu.

Discovered back in 1999, this half-a-kilometre-wide 'rubble pile in space' currently occupies the second-to-top spot on NASA's Sentry Risk Table - the list of near-Earth, potentially-hazardous asteroids that are being watched closely, because there is at least some chance, however small, that they could, someday, impact with Earth.

This 'distinction' has made Bennu a priority in the scientific community, but it has also thrust the asteroid into the media spotlight, so that it periodically shows up in tabloid articles, accompanied by headlines reporting our inevitable doom at the hands of this object.

Why does the #2 asteroid threat get so much attention?

While the top asteroid on the list, named 29075 (1950 DA), is bigger and faster, and thus would cause much more damage during an impact, this object only has one specific potential close encounter with Earth - on March 16, 2880. Bennu, on the other hand, makes for a slightly more compelling story when you're trying to hype up asteroid threats from space.

This animation of Bennu was captured by the OSIRIS-REx cameras when the spacecraft was at a distance of about 80 kilometres from the asteroid. It shows a full rotation of Bennu, over 4 hours and 18 minutes. Credit: NASA's Goddard Space Flight Center/University of Arizona

Not only is Bennu big enough to cause significant damage if it were to hit us, but it also goes through a series of encounters with Earth, with each encounter causing the asteroid to get closer and closer on each subsequent close encounter, resulting in a total of 78 potential impacts between the years 2175 and 2199.

REALITY CHECK
Although '78 potential impacts' is a somewhat alarming fact about Bennu, don't worry! There are two important thing to remember: 1) This is over 150 years into the future, so there's plenty of time to work out a solution, and 2) the most likely of these potential impacts - on September 24, 2196 - only has a 0.0094 per cent chance of hitting Earth. Or, to put it another way, there's a 99.9906 per cent chance that it will miss! Even if you add up the cumulative impact probability of all 78 events, together, the chance of an impact only increases to 0.037 per cent chance (with a 99.963 per cent chance it will miss, all 78 times)!
Those are extremely slim odds of an actual impact, so we really don't need to worry that much about Bennu! The only reason to entertain these possibilities, and look into addressing the potential problem, is that the stakes - the continued existence of human civilization - are pretty high!

It all starts in 2060, when Bennu is set to fly past Earth at a reasonable distance of around 750,000 km, or a little less than twice the distance to the Moon. That's a completely safe pass, but at that time, Earth's gravity is expected to give Bennu a slight nudge, so that when it comes back around for its next closest approach, on September 25, 2135, when the asteroid is known to be flying past us inside the orbit of the Moon, there's some uncertainty about exactly how much inside the orbit of the Moon it will be. It could be around 300,000 km away (around 80 per cent the distance to the Moon), or it may come as close as 100,000 km away (less than 1/3 the distance to the Moon).

The 2135 pass is completely safe as well, by the way. There is no chance of the asteroid hitting Earth at that time, even though it is flying past us inside the orbit of the Moon. There is the chance, however, depending on exactly how close Bennu does come to us, that it will fly through what is known as a 'gravitational keyhole' - a tiny point in space, formed by the gravitational attraction between Bennu and Earth, which could cause a significant change in the asteroid's orbit going forward.

If Bennu does pass through one of these tiny 'keyholes', the change in its orbit may be enough to turn one of the potential impacts between 2175 and 2199 into an actual impact.

There are a lot of uncertainties and 'ifs' involved in Bennu's future, but this is something OSIRIS-REx will really help us with, by resolving those uncertainties.

The spacecraft's primary missions are to map Bennu and return samples of it home, but it will also gather information that will help us track the asteroid's orbit more accurately, and it could provide us with insights that will allow us to deflect the asteroid (and others like it), should we need to at some point in the future.

One way OSIRIS-REx could help protect Earth from impacts is by examining how Bennu reacts as it absorbs sunlight and radiates heat from its surface. Does its rotation change? Does its orbit change, even in the slightest?

These kinds of changes are due to what's known as the 'Yarkovsky effect'.

We don't see it in everyday life, here on Earth, because there are just too many competing forces around (gravity, friction, air resistance), but any object that is emitting light experiences a very weak 'push' from each photon that leaves its surface. This is known as radiation pressure, and it is caused by the photon carrying away momentum with it as it leaves the object's surface, which - due to Newton's Third Law - results in an 'equal and opposite reaction', increasing the object's momentum in the opposite direction that the photon was emitted.

Out in space, far from any significant competing forces, this exchange of momentum can have a much bigger effect, especially on an object like a rotating asteroid.

As an asteroid like Bennu absorbs solar radiation on its Sun-ward side, and emits infrared photons from its surface (ie: heat), each bit of momentum imparted to the asteroid by each leaving photon effectively 'pushes' on the asteroid. Since it takes time for the solar radiation absorbed to be re-radiated as heat, the strongest 'push' from the leaving photons is from the 'afternoon' and 'evening' parts of the asteroid. Overall, this results in the object being 'pushed' along the direction of its orbit, as well as away from the Sun. So, over time, Bennu's orbit slowly spirals away from the Sun. If Bennu rotated in the opposite direction, it would spiral inward, towards the Sun.

Watch below to see the Yarkovksy effect in action, and how OSIRIS-REx will help


Being so close-in to Bennu, OSIRIS-REx can carefully track the asteroid's orbital path and rotation rate, to see how these may change over time.

The data the spacecraft sends back may help us to develop methods of harnessing the Yarkovsky effect, thus allowing us to protect Earth from asteroid threats.

Forget blowing asteroids up with nuclear weapons, or sending people (oil drillers?) to plant bombs inside them. Instead, robotic spacecraft may be deployed that are designed to alter the way a hazardous asteroid absorbs and emits light, by spraying different materials onto the surface, or by changing how much sunlight reaches the asteroid. Thus, we would be using the principles of radiation pressure and the Yarkovsky effect to our advantage, to cause the asteroid to gradually veer off from their impact trajectory, and safely sail past us.

RELATED: TO BENNU AND BACK, BY SCIENCE@NASA