Expired News - Canada's bed bug hot spots: See where your city ranks - The Weather Network
We use cookies on this site to improve your experience as explained in our Cookie Policy. You can reject cookies by changing your browser settings.   READ MORE I ACCEPT

Hamilton ranked seventh on a list of Canada's top bed bug cities in 2018, according to pest control company Orkin Canada.

"The population isn't going down as far as I can see."

The company's list is based on the number of commercial and residential bed bug treatments it completed in 2018.

Terry Quinn, city project manager, said Hamilton is not unique —bed bugs have been spreading across North America and affecting all cities.

The Orkin bed bug ranking doesn't surprise him, Quinn said because Hamilton is among the top 10 largest cities in Canada, so "I'd expect we'd be in the top 10."

Bed bugs can happen to anyone and in any place, he said, although they spread most easily in multi-unit buildings like condos, apartments and hotels.

But nobody is immune to the bed bug bites.

"As long as there's a human that's sleeping, the bed bug will attack," Baardman said. 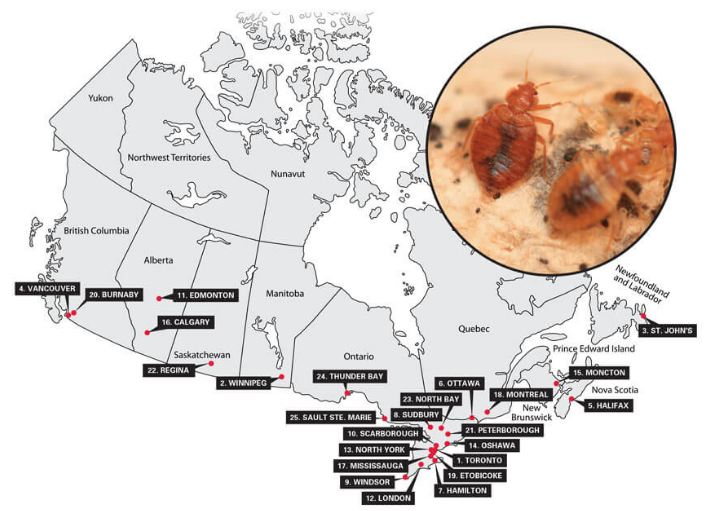 Orkin Canada's made its list based on how many commercial and residential bed bug treatments it did in 2018. Click to see a larger image. (Orkin Canada)

The critters feed on human blood and are "finely tuned to be with human beings," he added.

Quinn said the city started seeing a resurgence of bed bugs within the last decade.

Quinn said they've noticed changes in awareness and landlord action since starting the strategy, and are hoping to extend it past June 2019.

"It's a significant issue," Quinn said. "It really depends building to building."

The city has more information on finding, preventing and managing bed bugs here.

If you have bed bugs, you may see a reaction to on your skin, tiny black droppings on bed sheets and frames, and the bugs themselves, according to Baardman.

"Bed bugs love cracks and crevices," he added, and are especially prevalent in bed box frames so people should check in the tufts and seams of their top mattress and box spring.

The bugs are also territorial and will branch out to other parts of the bedroom as the population grows.

They may start living in headboards, Baardman said, and behind pictures and mirrors — and as the population gets really big, you could find them in curtains or window and door frames.

"It's at that pint you have a very serious infestation, but it happens often," he said. 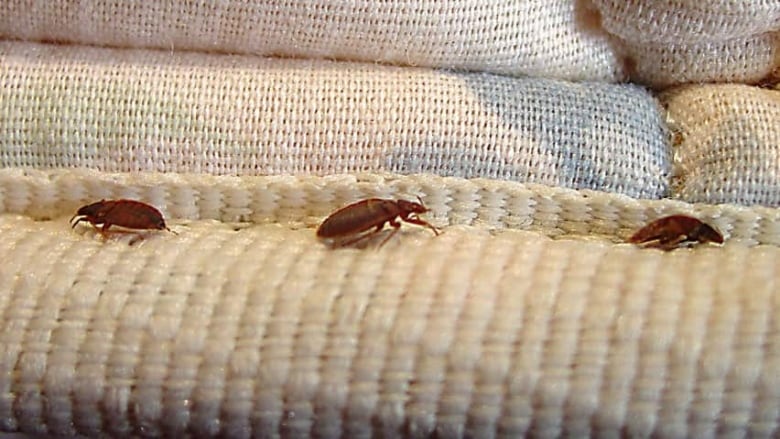 Bed bugs can happen to anyone, said city project manager Terry Quinn. Unlike with other pests, human beings are their bait.

The city also recommends looking along bedroom baseboard cracks, around tables and night stands and in the cracks and corners of furniture, among other places.

If you find bed bugs, Baardman recommends catching one and putting it in a plastic bag, so experts can identify it.

DON'T BRING THE BED BUGS IN

Want to prevent the unwelcome pests? Then be aware of who's in your bed.

"A very common way to get bed bugs is to spend the night with somebody who has them," Baaderman said.

And be cautious of what you're bringing home — especially used items like clothing, furniture, or book spines.

(RELATED: Everything you've ever wanted to know about bed bugs)

Among its recommendations, the city says to check luggage and immediately wash and dry all clothes after returning from a trip.

"It's much easier to find bed bugs if you live in a simple environment."

If you think your sheets or clothing are infested, Orkin Canada suggests drying them on the highest heat possible.

Bed bugs are "good hitchhikers," the company stated, so "early detection is the best way to reduce the chances of an infestation."

Orkin Canada says the country's bed bug problems have grown in the past two decades. Travelling leads to more bed bug opportunities, as does greater density in living and working spaces, a spokesperson said.

"It was very bad a few years ago and it's still very bad right now," he said.

Bedbugs are unlike other kinds of pests, Quinn noted.

"They're not coming for food scraps of unsanitary conditions," he said. "They're coming for you."

This story was written for the CBC by Laura Howells.

VIDEO: HATE BUGS? WHY NOT TRY EATING THEM?