Expired News - Global Sea Ice hits new record low for 2nd year straight - The Weather Network
We use cookies on this site to improve your experience as explained in our Cookie Policy. You can reject cookies by changing your browser settings.   READ MORE I ACCEPT

News
Editor's Choice
Thanksgiving: Plan ahead for outdoor turkey time, here
OUT OF THIS WORLD | What's Up In Climate Change - a glance at the most important news about our warming world

Thursday, January 11, 2018, 10:18 AM - With 2017 set to fall somewhere within the top three hottest years on record, global sea ice extent took another hit last year, as it dwindled down to a record low for the second year running.

According to the European Weather Centre, 2017 ranks as the second hottest year in the record books. The Japan Meteorological Agency's analysis puts it as third warmest. NASA and NOAA are roughly a week away from revealing their final tally of the year's temperatures, however their conclusions should fall within this same range. That is remarkable all on its own, for a year that should have come in considerably cooler, given all of the indicators (especially due to starting and ending the year in a La Niña pattern), save for the highest carbon dioxide concentrations measured in the atmosphere in modern times.

In 2016 - now and at least for another year, the hottest year on record - global sea ice extent suffered a precipitous drop, plummeting from a fairly average 2015 value to a new record low.

Now, as we wrap up 2017, data from the US National Snow and Ice Data Center (NSIDC) shows that annual average global sea ice extent has dropped again, hitting an even lower record value. 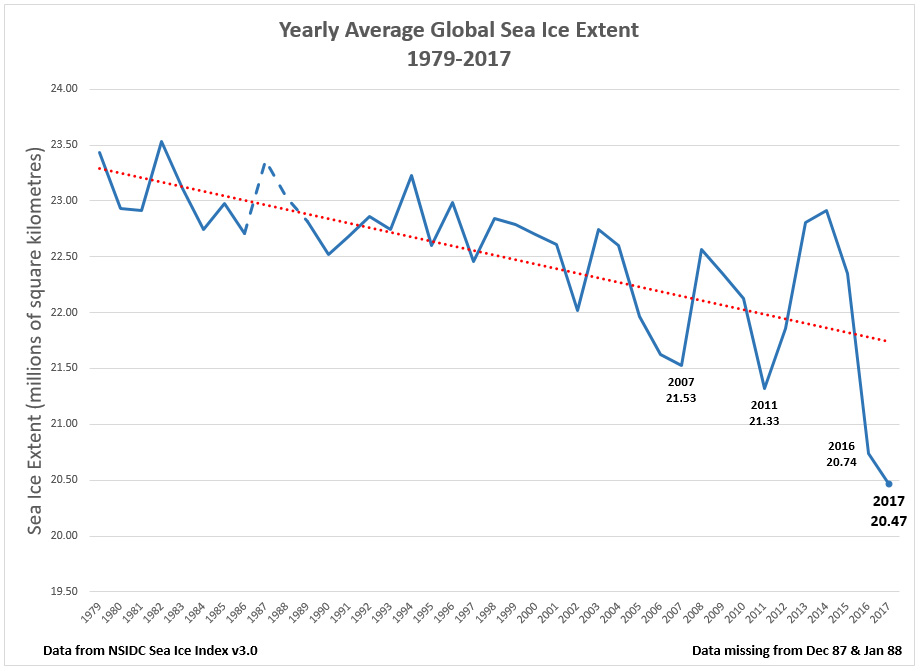 Annual average global sea ice extent, from 1979 to 2017. The long-term trend reveals the loses in sea ice over the past 38 years, with a precipitous drop from 2015 to 2016 and another record low set for 2017. Missing data from Dec '87 and Jan '88 prevent an accurate annual average for those two years. Credit: NSIDC/Scott Sutherland

At the end of 2016, it was losses at both poles that caused a record low for global sea ice. The Arctic started off with a record low winter maximum, saw record low extents through spring and a statistical tie for second lowest summer minimum, and had one of the smallest growth seasons to finish off the year, only barely tying 2010 at the end of December. This resulted in an annual average sea ice that dropped below that of 2012 (the year with the lowest summer minimum on record). Meanwhile, Antarctic sea ice extent had a fairly average run during the year, until it reached its winter maximum, and then spent 5 months - from November 2016 to April 2017 - at levels lower than any seen since the start of the satellite era. It finished off 2016 at second lowest annual extent on record, but all eyes were on what was going to happen in the Antarctic for 2017.

The culprit this year? It's all on the Antarctic.

The annual average for Arctic sea ice extent actually saw a slight increase from 2016 to 2017, mainly due to the slow melt season. 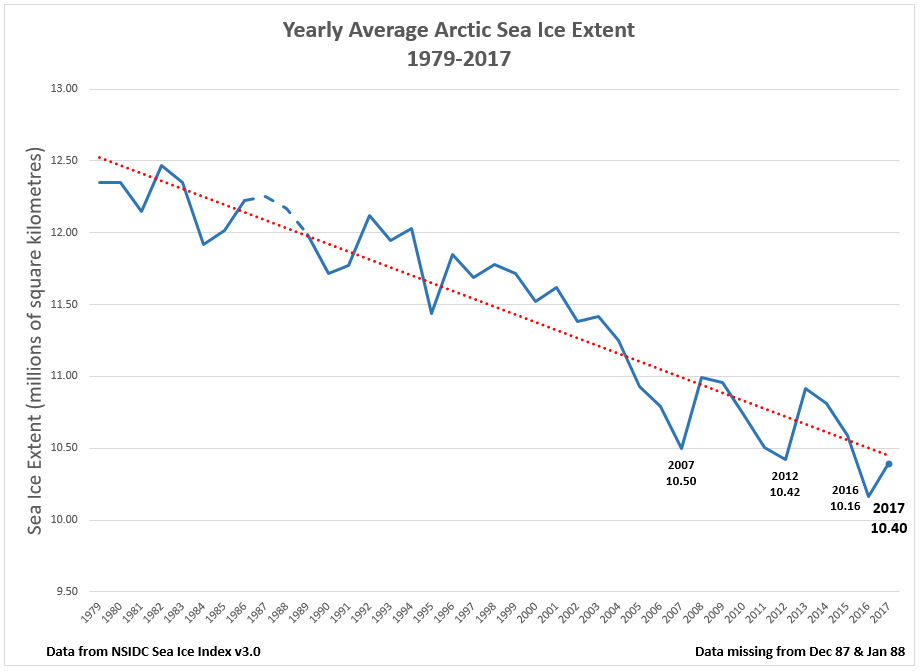 Watch below: Arctic sea ice dwindles away from its winter max to its summer minimum


According to the NSIDC, it was a particularly stormy season in the Arctic in summer 2017. This typically leads to sea ice being spread out farther by the winds, and it brought cooler temperatures at the surface, since most Arctic Ocean summer storms tend to be "cold cored."

In the Antarctic, after spending the first quarter of 2017 at record low extent, and the rest of the year at near-record lows, it resulted in a new record low for the annual average, at around half a million square km lower than in 2016, and 400,000 sq. km lower than the previous record low, in 1986. 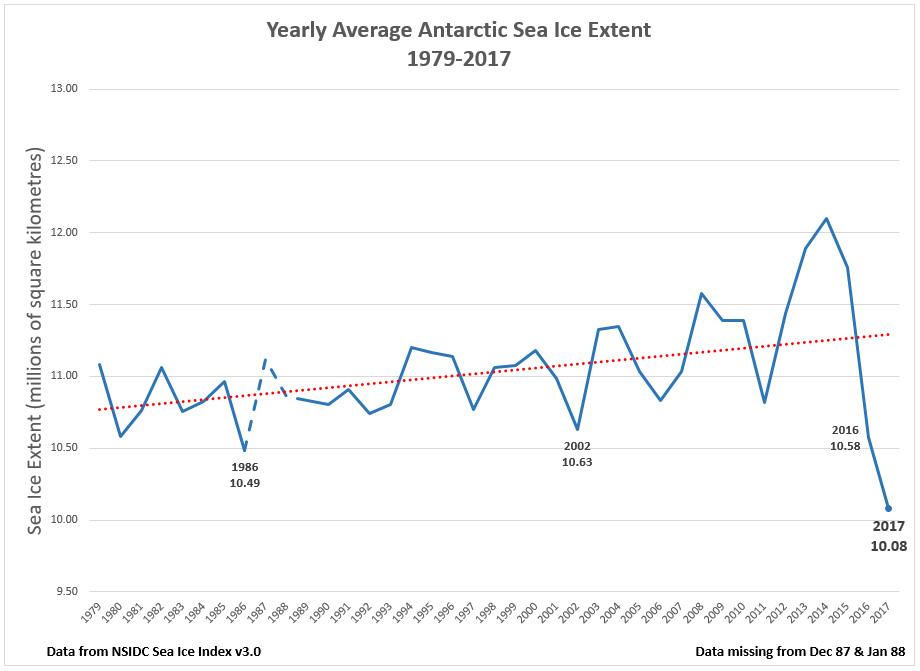 Annual average Antarctic sea ice extent, from 1979 to 2017. The long-term trend is positive for sea ice around the Antarctic continent, but 2016 and 2017 are showing an alarming drop away from that trend. Missing data from Dec '87 and Jan '88 prevent an accurate annual average for those two years. Credit: NSIDC/Scott Sutherland

So, with the Antarctic losing over twice as much sea ice between 2016-2017 as was gained in the Arctic over the same time period, the global average for the year still dropped to a new low.

Although there is an annual trend, as seen in the graphs above, sea ice extents do fluctuate from year to year, based on a few factors. Thus, it is very difficult to make predictions about the next season's extent based on the current trend. In 2018, so far, Arctic sea ice has started off the year at a record low daily extent, much like it did in 2017. This could lead to yet another record low winter maximum, as we saw last year, and in 2016 and 2015, as well. This says nothing for the 2017 summer minimum, however, which is far more important for gauging the impact of climate change on the Arctic. For the Antarctic, despite the lows seen throughout 2017, sea ice extent there finished the year slightly higher, and is starting off 2018 closer to the average as it approaches its summer minimum.

We'll be watching in the months ahead, to see where things lead.

Watch below: See Arctic sea ice get younger and younger each year for the past three decades