Expired News - What's the weather like in a galaxy far, far away? Find out - The Weather Network
We use cookies on this site to improve your experience as explained in our Cookie Policy. You can reject cookies by changing your browser settings.   READ MORE I ACCEPT

News
Editor's Choice
Canada's spookiest weather
Star Wars meets weather: the mono-climate planets of a galaxy far, far away explained
OUT OF THIS WORLD | For Science! - a weekly look at the weird, wonderful and sometimes wacky side of science and technology

Thursday, December 17, 2015, 4:28 PM - A long time ago, in a galaxy far, far away, there seemed to be an awful lot of weird places, each with but one climate dominating the entire planet. So, how could these mono-climate planets come to be?

Here on Earth, we have numerous climates all on one planet. Icy wastelands, temperate plains, tropical rainforests and scorching deserts, just to name a few, are spread about on different continents, based on latitude and general weather patterns in the atmosphere.

Look to the Star Wars galaxy, and most (if not all) of the planets and habitable moons we've been shown - Tatooine, Yavin 4, Hoth, Dagobah, the forest moon of Endor, for example - all have only one climate.

This special episode of For Science! takes a brief look at these monoclimate worlds, to talk about how they could form and what the weather would be like there.

Tatooine (at 0:20 in the video) is a desert world baked by twin suns. Like Mars, it may have had a much wetter environment in the past (and the Dune Sea is possible evidence of it having a large ocean in the past). Perhaps some cataclysmic event caused it to lose that water, or the oceans were simply boiled off as the binary stars Tatoo I and Tatoo II heated up as they aged. Either way, only a small amount of moisture remains in the atmosphere.

Dagobah (at 0:40), the swamp planet where Luke Skywalker was trained by Jedi Master Yoda, is apparently covered in swamps and bogs, very likely due to the thick layer of clouds that blankets the planet. Similar to what we see on Venus, these clouds would trap light and heat, producing a fairly uniform range of temperatures across the entire surface.

A planet like Hoth (at 1:11) could develop fairly easily, simply by having an Earth-like world form farther out from its star. It's also possible that Hoth was simply going through a climatic change, similar to the Snowball Earth stage our planet may have gone through, around 650 million years ago. It's thought that, at the time, either the eruption of a supervolcano pumped enough dust or sunlight-reflecting sulfur compounds into the atmosphere, or the concentration of greenhouse gases in the atmosphere fell to levels far below the roughly 300 ppm average, triggering a global cooling event that froze much, if not all, of the water on the surface.

For the forest moons of Yavin and Endor (at 1:31), the infrared radiation given off by gas giants - in some cases, totalling more than twice the energy they receive from their parent star - would be an abundant heat source for any moons orbiting around them. Move a planet like Jupiter a bit closer to the Sun, and its Galilean moons - Io, Europa, Ganymede and Callisto - could develop far more habitable environments.

Update: Based on a re-analysis of a draft white paper penned by Purdue University planetary scientist Dave Minton, presented by Tech Insider on Dec 23, the Forest Moon of Endor needs to be re-evaluated. 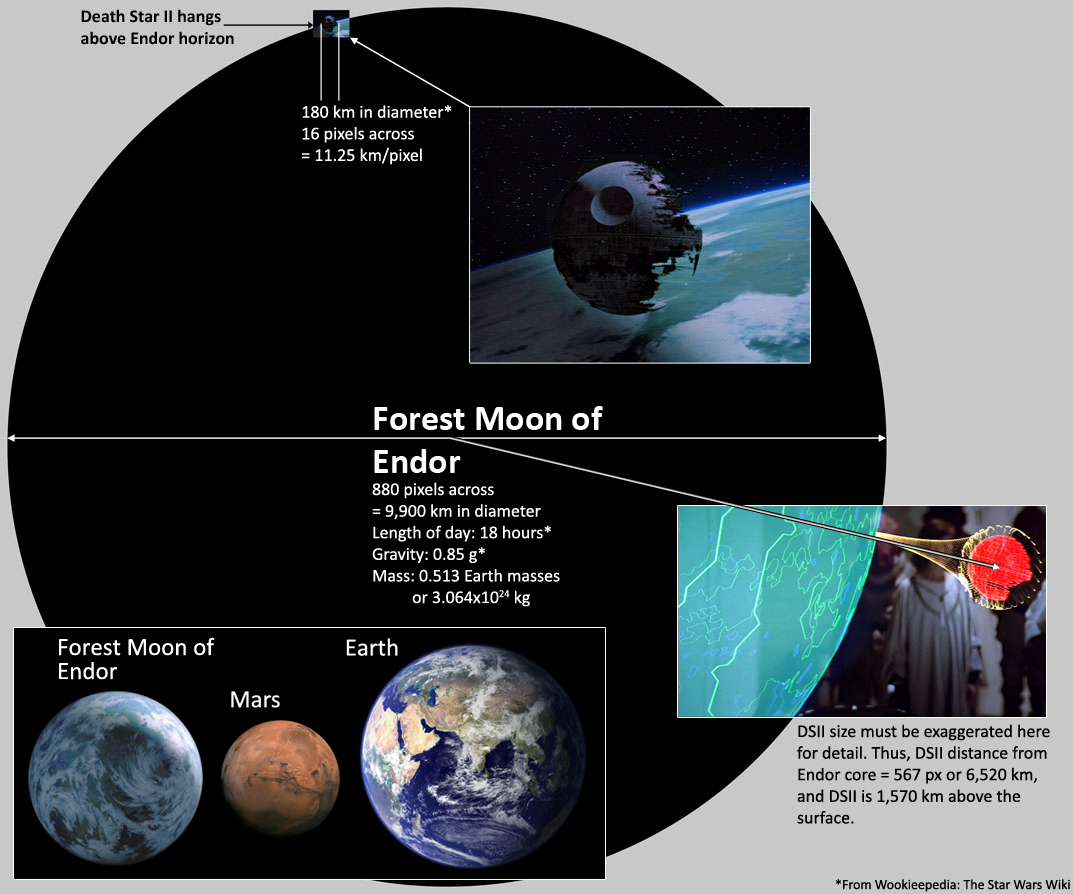 New planets revealed to us in Star Wars: The Force Awakens