Expired News - We explain: Strange cloud formation over central Ontario - The Weather Network
We use cookies on this site to improve your experience as explained in our Cookie Policy. You can reject cookies by changing your browser settings.   READ MORE I ACCEPT

News
Editor's Choice
A summer scorcher ahead? Canada's July forecast, here
OUT OF THIS WORLD | Science Behind the Weather

Saturday, June 23, 2018, 7:31 PM - If you chanced to look up into the sky from Barrie or Innisfil earlier this week, you would have witnessed a strange phenomenon in the clouds, which prompted some residents of the area to take to social media for answers.

The clouds made it seem like something supernatural was going on, but in reality was just a combination of a few events that lead to what many refer to as a 'skypunch'.

What was it, though?


My brother was outside at his school yesterday and he saw this rainbow in the sky we weren’t too sure what it was however my parents said it was a sign that Jesus was telling us something. It’s not just a rainbow . @SMCDSB_PET @weathernetwork @Twitter #onstorm @Pontifex pic.twitter.com/1rxF9Ch8Vp

It's certainly pretty bizarre, and definitely something you don't see every day. However, it's entirely natural. No alien or divine intervention required, and it's not harmful in the least.

It's a fallstreak hole, so-called because the water in that region of the cloud is falling to earth, producing those pronounced streaks it does, and leaving behind a hole in the cloud. 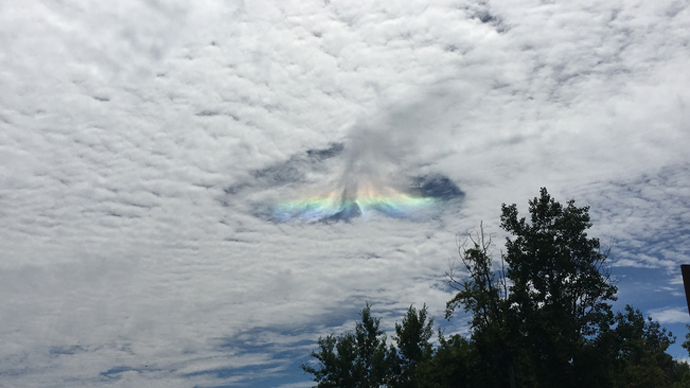 This image of the Barrie/Innisfil fallstreak hole was uploaded into The Weather Network's image galleries by user Arlene, on June 19, 2018.

How does this happen?

If you've ever taken a close look at weather reports, there's always something included called the dewpoint temperature. This is the temperature the air needs to cool to before the water vapour in the air will condense out, to form clouds, fog or dew (or all three!). However, a key 'ingredient' to this condensation is that the water vapour needs something to condense onto - bits of dust, pollen, etc - which are known as cloud condensation nuclei.

So, when a cloud forms, each of the billions of water droplets that make up the cloud have one of these cloud condensation nuclei at its core.

If there aren't any of these ice nuclei around, because all of the dust, pollen, etc, have already been used up as cloud condensation nuclei, the water droplets will remain liquid, even at well below freezing temperatures.

In other words, the droplets will become supercooled!

Okay, that's cool, but what about the skypunch?

Well, the thing about supercooled water, is that it is just waiting for a chance to freeze, and it will take the first and easiest chance it gets!

Now, to form a fallstreak hole - aka 'skypunch' or 'hole punch cloud' - you need a thin layer of cloud, composed of supercooled water droplets, and you need a source of ice nuclei, such as when an aircraft punches through the cloud layer, and ice crystals form in the wake of its engines or wings (the same as when contrails form).

As soon as these ice nuclei are introduced into that thin layer of supercooled water droplets, it sets off a sudden chain reaction. 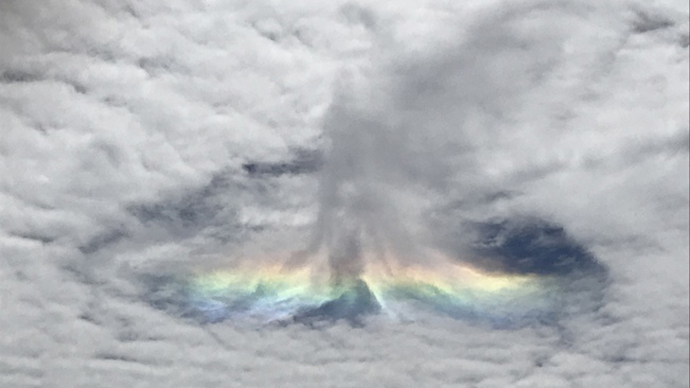 Weather Network reader Raviraj Panchal uploaded this close-up view of the skypunch to our galleries. Note the darker grey virga at the core of the phenomenon, which is composed of snowflakes that are falling away from the hole, where they eventually either sublimate, or melt and evaporate.

Since this happens so quickly, the droplets, crystals and snowflakes form streaks in the air as they converge on the source of ice nuclei, and the snowflakes fall from the core of the phenomenon.

The clearing around the edges of the hole is thought to be caused due to the heat each cloud droplet releases as it freezes. The combined heat from all of the freezing droplets causes the air directly above the core of the phenomenon to rise very slightly, and the surrounding air sinks very slightly in response.

Since the sinking air warms slightly, its temperature rises above the dew point temperature, and the water droplets evaporate. This leaves the a ragged hole in the cloud layer.

With the relatively dry air beneath the cloud layer, the snowflakes don't tend to last very long, and they sublimate back into water vapour, leaving behind only a bit of virga in the middle of the fallstreak hole.

What about the rainbow hues?

As for the rainbow hues seen spread through part of this particular fallstreak hole...

This doesn't always happen with every fallstreak hole, but in this case, the ice crystals that are forming have taken the shape of thin hexagonal plates or columns, and when sunlight shines through them, edge on, the light is refracted and split, just like what happens when you shine light through a triangular prism.

It's very similar to a parhelion - more commonly known as a sun dog.