Expired News - Extreme weather events NOT making headlines - The Weather Network
We use cookies on this site to improve your experience as explained in our Cookie Policy. You can reject cookies by changing your browser settings.   READ MORE I ACCEPT

Destructive and high impact weather typically grabs the headlines and our attention, but the past several months have brought some unusual weather phenomena that have more quietly made history.

CANADA'S TWISTERS: Tornadoes in Canada: Everything you need to know

Here is a look at four weather related events that have for the most part not been headline news.

While the ice coverage on the Great Lakes this past winter came up short of the record, the very slow melting of the ice through the spring has resulted in unprecedented ice coverage. As of April 23, 2014, much of Lake Superior was still ice covered with the overall Great Lakes coverage at 35 percent. 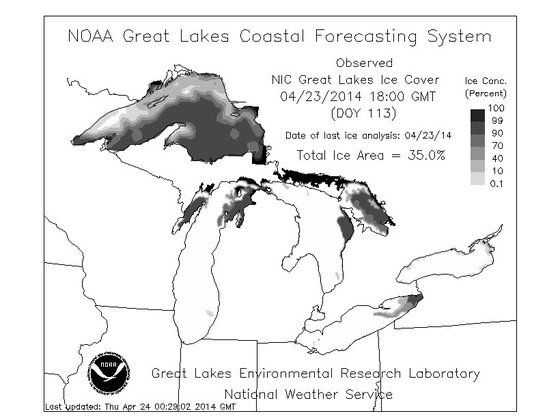 The chart below shows the ice coverage on the Great Lakes for this date going back to 1981. Spring 2014, represented by the blue bar on the far right, stands out well above any other year. Current ice coverage is over double the previous record for the date which was set in 1996. During the majority of the years, ice coverage during the final week of April has been less than two percent. 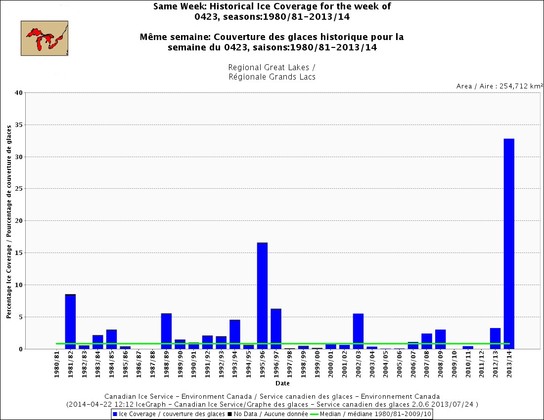 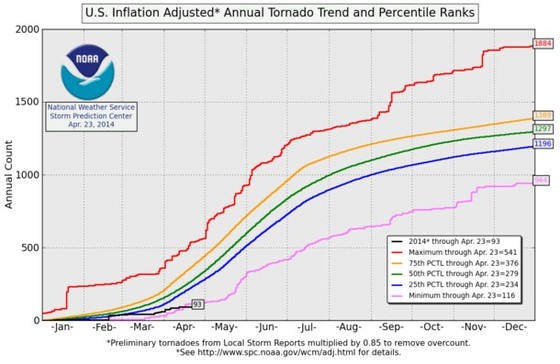 This record low start to the 2014 season comes on the heels of a record low number of tornadoes in 2013. The black line on the chart below indicates the tornado count for 2013 which ended the year at 802. The previous record low was 944. 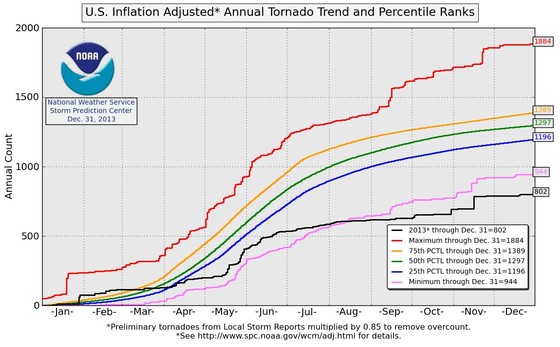 It should be noted, though, that a slow start to the severe weather season does not mean that the rest of the season will be quiet. The current record low status will likely come to a temporary end early next week as a substantial multi-day severe weather event is likely for Sunday and Monday from the southern Plains to the Gulf States.

In addition to the slow start in the total number of tornadoes, there has also been a lack of violent tornadoes. Through April 23, 2014 there has not been an EF3 or stronger tornado in North America. Prior to this year, the latest occurrence of the first EF3 tornado was March 31, 2002. Typically, the first EF3 or stronger tornado occurs in early February.

The 2013 tropical season was also very quiet across the Atlantic to the east of Canada and the United States. The best measure of the intensity and duration of tropical storms and hurricanes is the Accumulated Cyclone Energy (ACE) Index. During the tropical season that ended on November 30, 2013, the ACE for the Atlantic Basin was 30 percent of normal and tied for the fifthlowest on record.