Expired News - Tips to take Eclipse photos (and not destroy your phone) - The Weather Network
We use cookies on this site to improve your experience as explained in our Cookie Policy. You can reject cookies by changing your browser settings.   READ MORE I ACCEPT

News
Editor's Choice
Don’t fall victim to these seven dangerous tornado myths
OUT OF THIS WORLD | Earth, Space and Everything In-Between - a daily journey through weather, space and science with meteorologist/science writer Scott Sutherland

Tips to take Eclipse photos (and not destroy your phone) Monday, August 21, 2017, 2:12 PM - With the solar eclipse upon us, undoubtedly a multitude of cellphone cameras will be pointing up to capture the event. While it is possible to snap pictures of the eclipse with your cellphone, a bit of preparation is needed.

All across Canada, the August 21 solar eclipse will be showing up as a partial eclipse in our skies, since from our angle, the Moon will not completely cover the Sun during the event. The only area that will see the Moon completely cover the Sun is the thin, roughly 100 km wide band through the United States that's known as the "path of totality". 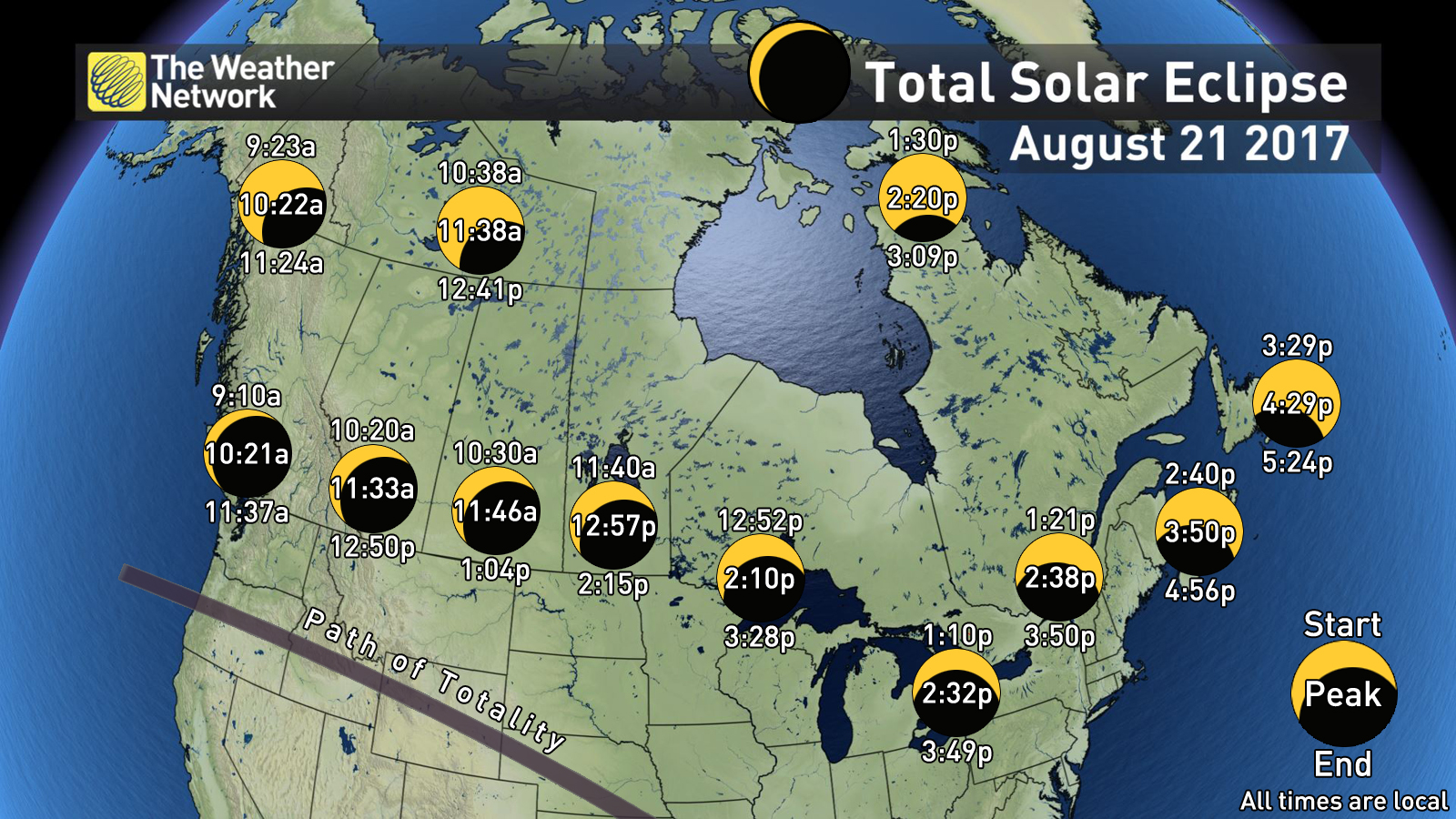 While those in the along that path will surely be capturing some great pictures during totality, just by taking out the cellphone and snapping away, we will not be so fortunate. In fact, except for those areas where the eclipse approaches 90 per cent coverage, it's going to be very difficult to tell anything is going on, except through the right filters, or using the right equipment. The Sun is simply so bright, that even when 70 or 80 percent of it is covered, the remainder that peeks past the Moon will still be glaringly bright.

How to do it right

When the solar eclipse is occurring, the best thing, really, is to just put your cellphone away, put on your eclipse glasses, or look through your #14 welders glass, or use your pinhole projector, or maybe just set yourself up under a leafy tree and watch the ground at your feet. They say that a solar eclipse, even a partial one, is an amazing sight to behold. So, simply watching it and enjoying it, without worrying about taking pictures, will probably be a much better experience.

If you really want to take pictures or videos of it with your cellphone, however, there is a way to do it.

The only things you need, other than your cellphone, are a pair of eclipse glasses, a pair of scissors (optional), and some tape.

LOOKING FOR ECLIPSE GLASSES? Check your local bookstore for the latest issues of magazines such as SkyNews and Astronomy. Try stores such as Best Buy or perhaps even your optometrist's office. Visit one of the viewing locations set up by the Royal Astronomical Society of Canada. If all else fails, make your own pinhole projector!

If you want to reuse the eclipse glasses, or you want to wear them for most of the eclipse and only take a few pictures, just center one of the filter lenses over your cellphone camera and tape it down along the edges (avoid covering the filter), so it stays in place. Then, when you want to watch the eclipse again, just peel off the tape, and put the glasses back on to watch safely.

If you have an extra pair of eclipse glasses, or you plan on taking a lot of pictures or recording video of the event, and you don't mind just watching it via your phone screen, take the pair of scissors and cut out one of the filters from the eclipse glasses. Then, tape the filter down over the cellphone camera lens. 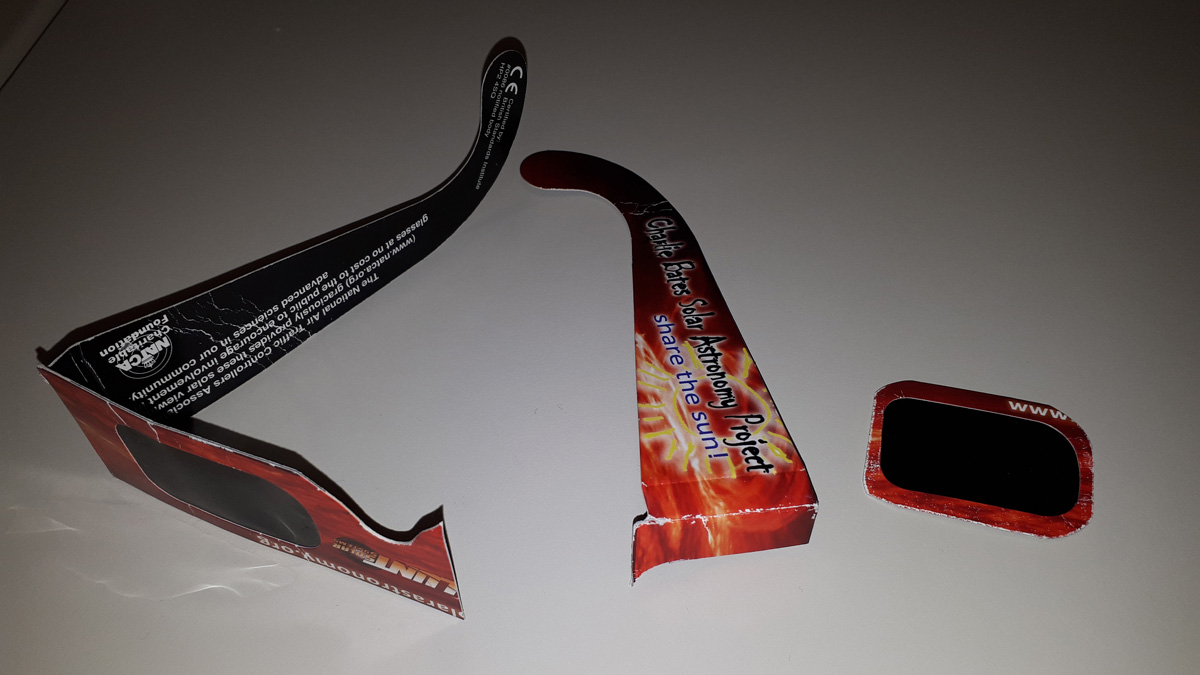 Just make sure that the camera is "looking" through the filter in the same direction you'd be looking if you were wearing the glasses, so the dull or dark side of the filter is facing towards the camera.

Then, point the camera up into the sky, and pan around until you spot the Sun on your screen. It should be the only thing you see, since all the other light from the sky, and from everything else around you, will be filtered out.


As shown in the video above, there's definitely a trick to this. The best thing to do is grab a hat with a brim, to keep the Sun out of your eyes, and only use the phone's screen to locate and view the Sun. Note: if you try wearing a pair of eclipse glasses while you're doing this, you won't be able to see your phone at all. At the same time, though, be extremely careful not to look directly at the Sun with your unprotected eyes. Only use your phone's screen to view the sky while you're taking pictures or video.

Also, be aware that it will be difficult to see what's on your phone screen while you're outside, due to the comparative brightness of the sky. If you can't see anything on the screen, increase the brightness to maximum, to make it easier to read.

In addition, having an app for your phone that gives you manually control over focus, zoom and aperture, can improve your images. 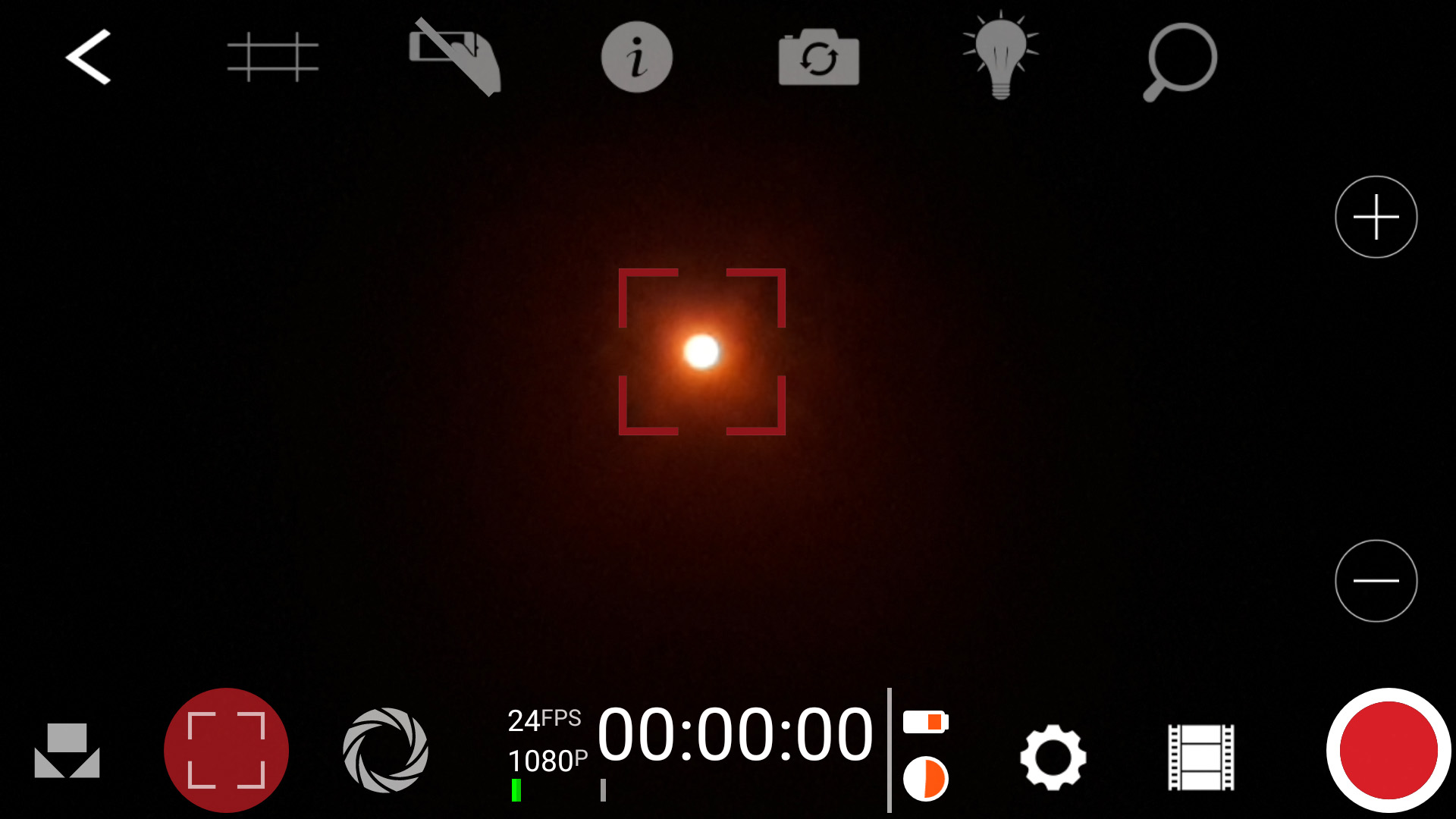 A screen capture of the Sun, viewed through a solar filter, using a 16 megapixel cellphone camera and the FiLMIC PLUS video app for Android. The red reticle indicates that the focus is locked. The controls are not visible in the recorded video. Credit: Scott Sutherland

If your camera is on auto focus, as many cellphone cameras are by default, it may try to focus on the filter instead of the Sun. You'll still capture the eclipse, but it will likely produce grainy pictures. A different app, with more options, can give you full manual control, where you can simply change the focus using a slider, or by dragging a reticle over your desired target and then locking the focus when it is set properly. Either one will improve your results.

Furthermore, since cellphone cameras are capable of taking high resolution images and video now, it is probably best if you avoid the temptation to zoom in on the Sun, and simply crop the image or zoom in on the video afterward. If you prefer to zoom in, a tripod for your phone will help steady the shot.

It cannot be stressed enough that anyone viewing the eclipse needs to be very careful to avoid damaging their eyes. Here in Canada, where we see only a partial eclipse, this is especially true.

A quick glance will do very little harm, so anyone who does so accidentally, likely has nothing to worry about. Anything from repeated glances up to prolonged staring, however, will result in solar retinopathy, or a sunburn on the back of your eye. It takes minutes of prolonged staring to cause permanent damage to your eyes, but less than that can still cause temporary damage that can last for months. The problem with solar retinopathy is that you may not realize it is happening, because the damage occurs without causing any pain. Thus, significant damage could accumulate before you notice that anything is wrong. Stay safe, and do not take chances with your vision.

This is why there are so many messages about what can and cannot be used to view an eclipse. Anything except properly rated eclipse filters ("eclipse glasses" or "solar viewing glasses") or welder's glass, with a shade rating of 12 to 14, risks damage to your eyes. Electric arc welder goggles are also likely safe, however some equipment may not have the proper rating (such as for gas welding), so caution is recommended. Indirect viewing methods, such as a pinhole projector, work if eyewear is unavailable.

Also, as there are some eclipse glasses being sold on the internet that are counterfeit - their ISO safety rating has been printed onto the glasses without actually seeking the official certification - there are ways to tell whether your glasses are, indeed, safe.

According to the American Astronomical Society:

How can you tell if your solar viewer is not safe? You shouldn't be able to see anything through a safe solar filter except the Sun itself or something comparably bright, such as the Sun reflected in a mirror, a sunglint off shiny metal, the hot filament of an unfrosted incandescent light bulb, a bright halogen light bulb, a bright-white LED bulb (including the flashlight on your smartphone), a bare compact fluorescent (CFL) bulb, or an arc-welding torch. All such sources (except perhaps the welding torch) should appear quite dim through a solar viewer.

Even with all of this said, be wary of any warnings that specifically tell you not to look at the eclipse, at all, even if you have the above recommended protections. The source of the warning may mean well, but the methods mentioned are perfectly safe. Supervise any young children, to prevent them from removing their eclipse glasses during the partial eclipse, but really noone should miss out on this event.

If all else fails, watch the eclipse on our website, Twitter feed or Facebook page, or on television via The Weather Network, as we broadcast a live feed from the path of totality.

CHECK OUT OUR OTHER ECLIPSE CONTENT:
Clear? Cloudy? What will Canada see for the Solar Eclipse?
How to safely view the August 2017 Total Solar Eclipse
Whatever you do, don't look (and 2 more eclipse travel tips)
Total solar eclipse headlines summer astronomy in 2017

Watch Below: How to watch the solar eclipse through a pinhole projector