Expired News - Droughts, floods from weird jet stream linked to Arctic heat - The Weather Network
We use cookies on this site to improve your experience as explained in our Cookie Policy. You can reject cookies by changing your browser settings.   READ MORE I ACCEPT

News
Editor's Choice
Tracking deadly Tropical Storm Isaias, here
NASA Polar Jet Stream Animation
OUT OF THIS WORLD | What's Up In Climate Change - a glance at the most important news about our warming world

Tuesday, March 28, 2017, 7:17 PM - Something strange is going on, with more incidences of unprecedented heat waves, droughts and flooding happening in recent years, and based on the latest research, it's looking more and more like climate change is to blame.

The Arctic is warming faster than anywhere else on the planet, due to global warming and the resulting changes it is causing to Earth's climate. For 2016 alone, NASA recorded an average temperature anomaly in the Arctic of over three times what was observed at the equator.

According to a new study in the journal Nature Scientific Reports, headed by Penn State climate scientist Michael E. Mann, the jet stream is being locked into some strange, persistent patterns by this Arctic heat, and this, in turn, is fueling some of the extreme, unprecedented weather events we have been experiencing in the last few decades.

"The warming of the Arctic, the polar amplification of warming, plays a key role here," Mann told Penn State News. "The surface and lower atmosphere are warming more in the Arctic than anywhere else on the globe. That pattern projects onto the very temperature gradient profile that we identify as supporting atmospheric waveguide conditions."

Map of global temperature anomalies for 2016, compared to the 20th Century average. The Arctic was roughly 3.2oC above average vs 1oC above average at the equator. Credit: NASA GISS

When jet stream winds blow fast, the west-to-east winds (zonal flow) dominate, the pattern is fairly smooth, and the strongest flow tends to be roughly centred in the mid-latitudes. 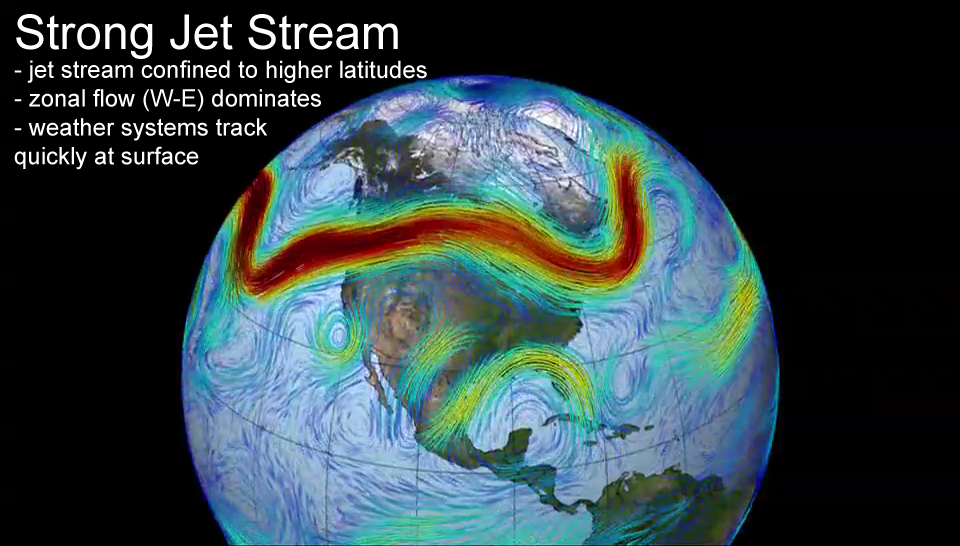 In this case, weather systems at the surface track along fairly quickly. Extreme weather does occur under these conditions, but they are typically brief events.

When jet stream winds are slower, though, north-south winds (meridional flow) become more prominent, and the pattern looks more like a roller coaster, with extreme dips and ridges. Here, the strongest winds in the flow (the "jets") tend to be at the northern and southern extremes of the pattern, in effect producing a "double jet" across the mid-latitudes.

When this happens, weather systems become bogged down between the ridges and valleys, and they simply can't move until this jet stream pattern finally breaks down. This sets the stage for prolonged extreme weather - heat waves as regions get trapped under hot, humid, oppressive air masses for days at a time, droughts and wildfires due to bone-dry flows of air being locked into place for weeks, months or longer, and flooding due to periods of continuous rainfall that cause rivers and streams to fill and overflow their banks. 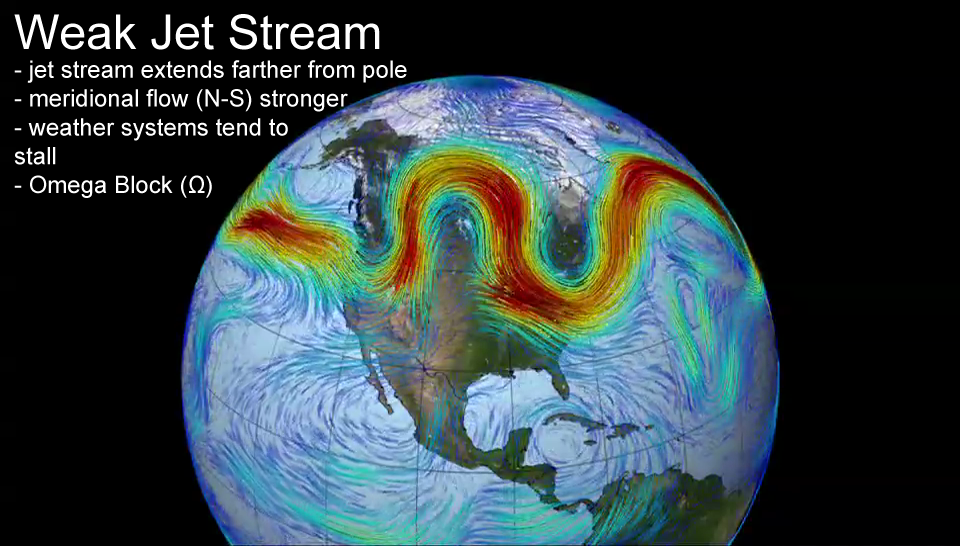 The same simulation now showing an "Omega Block" with more meridional flow, with the strongest parts of the flow (the "jets") split apart to the northern and southern mid-latitudes. Credit: NASA Goddard Scientific Visualization Studio/S. Sutherland

These conditions can occur all on their own, of course, during the normal variability of weather. The "Omega Block" - the pattern shown in the image above, named for its resemblance to the Greek letter Ω - is a very well-known feature that happens every so often. It can result in heat waves and flooding events, but it will eventually break down, typically due to smaller-scale ripples (ie: "short waves") in the pattern causing the extreme ridges and troughs to decay and smooth out.

In this new study, Mann and his colleagues first identified a specific "fingerprint" in the temperature gradient across the mid-latitudes that favours the development of these persistent "double jet" patterns. Basically, when this "fingerprint" is present, the shape of the jet stream pattern, and how the small scale ripples flow along the pattern, actually work together to keep the pattern intact for long periods of time.

"Under certain circumstances the wave disturbance is effectively constrained by an atmospheric wave guide, something similar to the way a coaxial cable guides a television signal," Mann told Penn State News. "Disturbances then cannot easily dissipate, and very large amplitude swings in the jet stream north and south can remain in place as it rounds the globe."

Based on their study, this "atmospheric wave guide" comes into effect, sustaining the pattern of the jet stream for long periods of time, when there are between 6 and 8 peaks and valleys in the flow.

Once they had that "fingerprint" pattern, they applied it to the results of 48 different climate models (part of the Coupled Model Intercomparison Project Phase 5, or CMIP5), which they used to simulate historical temperature gradients across the mid-latitudes (something these models can reliably reproduce), and they compared it to actual real world historical temperature records as well. Their results show that these double jet patterns have been turning up more often in the summer months, and that it is the most recent warming, over the past decade, that has allowed scientists to pick out this signal from the natural variability of the weather.

As the team wrote in the study:

In summary, our analysis of both historical model simulations and observational surface temperature data, strongly suggests that anthropogenic warming is impacting the zonal mean temperature profile in a manner conducive to wave resonance and a consequent increase in persistent weather extremes in the boreal summer. Combined with other additional proposed mechanisms for climate change impacts on extreme weather, this adds to the weight of evidence for a human influence on the occurrence of devastating events such as the 2003 European heat wave, the 2010 Pakistan flood and Russian heat wave, the 2011 Texas heat wave and recent floods in Europe.

While this is an active research area, which means that scientists are investigating it and gathering evidence - some of which supports it and some of which refutes it - this is still a very intriguing idea, with some very important implications about how we're altering our planet and what kind of weather we could be inflicting on ourselves in the future through those alterations.

"Currently we have only looked at historical simulations," Mann told Penn State News. "What's up next is to examine the model projections of the future and see what they imply about what might be in store as far as further increases in extreme weather are concerned."