Expired News - Closest new moon of 2016 brings King Tides to Canada - The Weather Network
We use cookies on this site to improve your experience as explained in our Cookie Policy. You can reject cookies by changing your browser settings.   READ MORE I ACCEPT

News
Editor's Choice
Major winter storm slams U.S. East Coast, Canada
OUT OF THIS WORLD | Earth, Space And The Stuff In Between - a daily journey through weather, space and science with meteorologist/science writer Scott Sutherland

A view of the Moon on April 7, as the closest new moon of 2016. Along with various data about the Moon's position, orientation and distance, the label for Neper crater can seen peaking around the Moon's eastern limb. Credit: NASA Goddard

Night by night this week, the Moon is becoming a thinner and thinner sliver in our night skies, until it disappears from view on April 7 - lost in the daytime sunlight, in its "new" phase. At the same time, the Moon is drawing closer and closer, so that by just before noon EDT on that day, it will reach its closest distance to Earth since the September 27 Super Moon Eclipse, resulting in the closest "perigee new moon" of 2016.

When this happens, the stronger gravitational pull from the Moon on Earth's oceans will cause one of the largest tidal variations of the year, known as the King Tides.

While tides vary greatly based on the location, the most extreme tides in Canada will be seen in Bay of Fundy, between New Brunswick and Nova Scotia. With the highest tides in the world, on an average day the Bay of Fundy sees a range from around 2 metres at low tide to around 15 or 16 metres during high tide - a difference of around 13-14 metres. On Thursday and Friday, low tide will drop to less than 1 metre and high tide will rise to over 17 metres - a difference of over 16 metres, or high enough to flood a 4 or 5 storey building!

What is going on behind King Tides?

Tides are a regular fact of life for Canada's coastal regions. The waters along our shores advance and retreat twice every day, swelling even higher and dropping even lower twice every month, and there's even a cycle to them that requires a yearly calendar to track.

King Tides are exceptional tides - the highest and lowest tides, resulting in the largest tidal variation of the year - which happen roughly twice every year.

So, what goes into making the King Tides? It's the gravitational "dance" of the Earth, the Moon and the Sun.

As the Moon orbits around the Earth, the planet and everything on its surface feels a varying amount of pull due to the Moon's gravity - stronger on the side facing the Moon and weaker on the side opposite to the Moon. This is a fairly weak effect when compared to the gravitational pull of the Earth, especially on the small-scale, so we barely notice it, and it has a minuscule effect on pretty much everything else around us. When you apply this pull across larger scales, however, such as the diameter of the Earth, and have it acting upon the kilometres-deep fluid filling Earth's oceans, the collective effect of the Moon's gravity on all of those individual water molecules adds up.

This results in two "bulges" of water, one on either side of the Earth, as shown below. 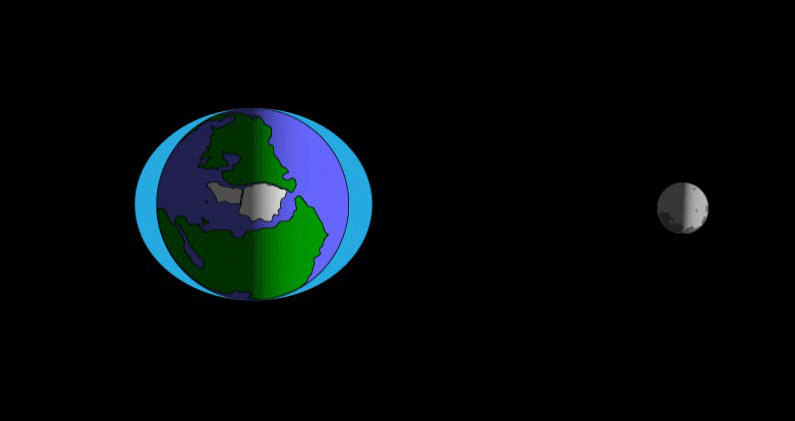 The lunar tidal bulge in Earth's oceans. Not to scale. Credit: NASA Scijinks

The bulges are a direct result of the strength of the Moon's gravitational pull. The near-side ocean is pulled more, so the water bulges towards the Moon. The far-side ocean isn't pulled as much, so it produces an equal and opposite bulge away from the Moon.

As the Earth rotates through its 24 hour day, that tidal bulge remains pointed along the same axis - towards and away from the Moon - and this translates into a twice-daily cycle of tides. As the Moon orbits around the Earth, tracing out an elliptical path on a 29-day schedule, this change in the Moon's position throughout a month causes the timing of the high and low tides to advance by a bit each day.

How the lunar tidal bulge changes during the Moon's orbit around Earth. Not to scale. Credit: NASA Scijinks

With the Earth and the Moon always in motion around the Sun, our home star exerts its own influence on the oceans as well, resulting in a second, smaller tidal bulge. This one is due to the same reason as the one from the Moon - the stronger gravitational pull on the day side than the night side - but it isn't as strong. When it comes to gravity, size and distance matter. The Sun may be bigger, but it's much farther away than the Moon.

There are some exceptionally high and low tides, though, when forces start to line up.

Twice every month - when the Moon is new and full - Earth, the Moon and the Sun form a straight line configuration, known in astronomy as syzygy (pronounced SIH-zedge-ee). At this point, the tidal bulges from both the Sun and the Moon come into alignment with each other, and coastal regions see higher high tides and lower low tides than usual. Regardless of what time of year this occurs in, this is called spring tides. 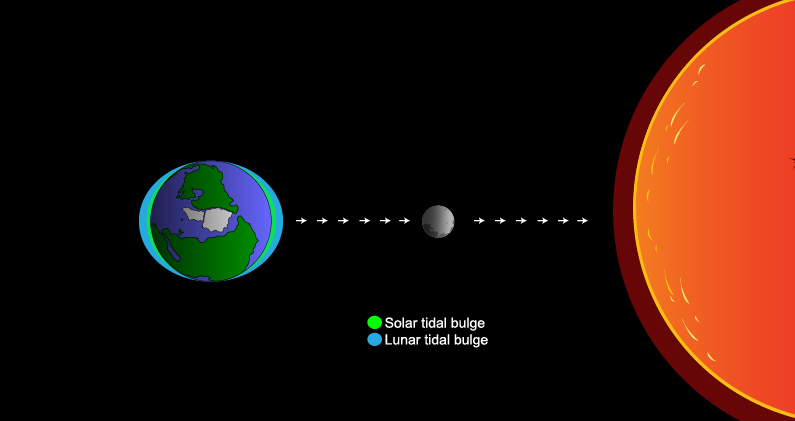 The combination of lunar and solar tidal bulges during the new moon. The same configuration of tidal bulges occurs during the full moon as well. Not to scale. Credit: NASA Scijinks, with edits by author

Conversely, when the Moon is in its waxing or waning gibbous (half-moon) phases, with the Sun, Moon and Earth forming a roughly 90 degree angle from each other, the solar and lunar tidal bulges are as out of alignment as they can get, producing the smallest variations between high and low tide. This is known as neap tides.

There's one more aspect to this unaccounted for so far, though. The orbits of the Earth and the Moon are not circular.

Each month, the Moon traces out an elliptical path around the Earth, going through a closest point (perigee) and a farthest point (apogee) on each orbit. The timing of perigee and apogee varies from month to month, but there are a few times each year - coinciding very closely with the Moon being in its new or full phase - when perigee is exceptionally close to Earth. A "perigee" Moon, or "Super Moon" as some call them, produces the strongest effect on Earth's oceans, resulting in the deepest lunar tidal bulge. When this happens, it's known as a perigean spring tide or King Tide.

There is also a similar effect between the Earth and the Sun. When Earth's elliptical orbit brings it closest to the Sun, in early January, this results in the deepest solar tidal bulge of the year. For this reason, the northern winter tends to be the season for King Tides, as any spring tide that happens during that time will combine with the deepening solar tidal bulge to produce some of the largest tidal variations of the year. King Tides do not always happen in winter, however. We need only look back to September 2015 for evidence of that, and this week is another example. Since the Moon is the dominant influence on Earth's tides, we don't necessarily need the deepest solar tidal bulge to produce a King Tide. An exceptionally close perigee Moon can produce that all on its own.

If a perigean spring tide does occurs during the winter, though, the combination of lunar and solar tidal bulges can result in the largest King Tides seen in years!

For 2016, the closest perigee Moons are on April 7, November 14 and December 12, so we can expect the King Tides to return in late fall.

Dates and distances of the closest perigee moons of 2016. The November 14 perigee is the closest since 1930, and the Moon is not expected to get closer until 2034! Credit: NASA Goddard/S. Sutherland

A glimpse of the future

In addition to the novelty of the King Tides, they are giving us a glimpse of the future, as sea levels continue to rise due to climate change.

This week: closest New Moon of 2016 will cause King Tides; how much higher will they be in 50 years? pic @noaaocean pic.twitter.com/hOwgtJUJyo

According to some of the latest research, sea levels could rise by 30-60 centimetres over the next 50 years. When interviewed about the recently published study he headed up, climate scientist James Hansen pointed out that if the melting of Greenland and Antarctic glaciers proceeds at an accelerated pace, as evidence from the past has shown, sea level rise could be around ten times higher than the most conservative estimates - or around 3 metres by 2065.

Related Video: See every phase of the Moon for 2016, courtesy the NASA Goddard Scientific Visualization Studio.