Expired News - Chris Hadfield's guide to Canada's winter from space - The Weather Network
We use cookies on this site to improve your experience as explained in our Cookie Policy. You can reject cookies by changing your browser settings.   READ MORE I ACCEPT

Monday, November 26, 2018, 5:06 PM - As winter looms over Canada, Weather Network personality Chris Mei sat down with Commander Chris Hadfield to talk about what the coldest season looks like from outer space. This interview has been edited for length and clarity.

As you made close to 2,400 orbits around the planet, what does winter look like from the near-Earth orbit of our planet when you’re passing over Canada?

Winter is beautiful over Canada. It’s like Canada just got a new, simple paint job. It's lovely. Suddenly there’s [these] pastel shades of almost exclusively white and black.

But of course if you really look at snow, it reflects the colours of the sky. And you get the blues and the gentle colours as well reflected in the snow. And it’s lovely, it covers up our sins to some degree as well, so that it gives almost everything a fresh and pristine look.

It’s beautiful. You come across the country, and its all the various shades of brown that the fall [brings], then suddenly, the whole thing has been dusted with sugar. And it’s lovely to see, it’s nice to see that cycle of the season, especially if you cross the country in nine and a half, ten minutes, you can see the whole thing, changing seasons below you.

WATCH BELOW: STUNNING VIEW OF LIGHTNING FROM SPACE


Staying in Canada for a second, I guess I want to compare and contrast, because we have such a huge country … do you notice marked differences between the different mountain plains?

Yeah, let me take you across the country.

You’re going at 8 km/s in the spaceship, so 28,000 km/h, as you’re coming across the Pacific. And in the distance, you can start to see the mountains of the Rockies, the whole coast. You can pick up Vancouver island, you come racing up and across, and if your trajectory is just right, if you're just coming south of Victoria, then you arc up over the Rockies, and the Rockies are like this jagged, angular, rough, almost raw-looking reminder of what the world can look like, from the rise of the green of the coast up to the harsh angularity of the Rockies themselves, scathing the light from all the different tangles. 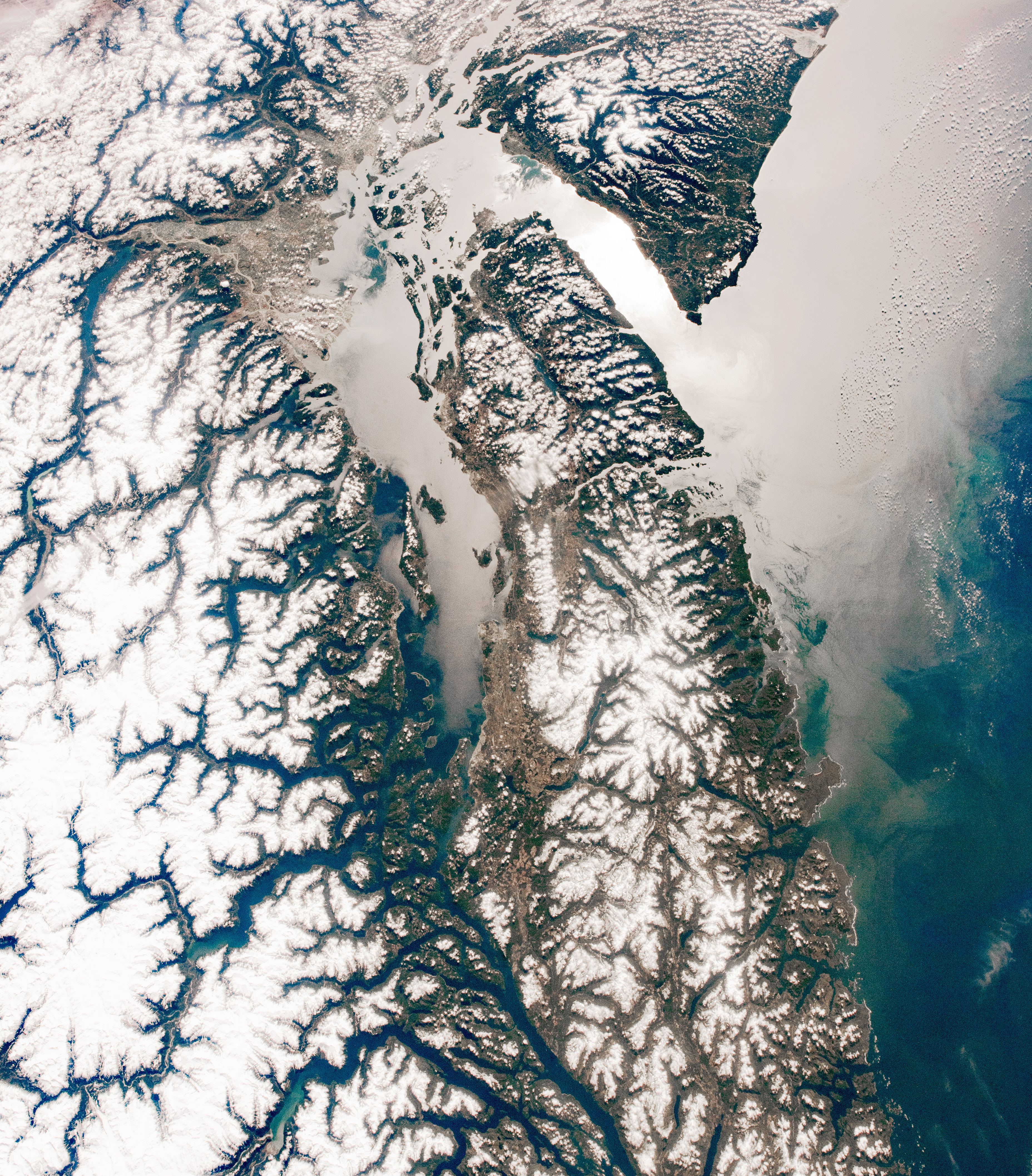 And then, poof! You come out of the Prairies, and it becomes this vast expanse, with really, the Qu'appelle valley [dominating] all the way across, Lake Diefenbaker, you pick up Lake Winnipeg and Lake Manitoba in the distance, you can see Calgary and Edmonton and Regina and Winnipeg, against the snow, they’re almost like these black spiders below you.

But Winnipeg in the winter time looks just like a maple leaf on its side, oddly enough, if you get it in the winter with just the right roads showing.

But then, of course, the Great Lakes dominate. And the little bit of ice coming across Superior and then gathering at the exits of all the lakes down to the Soo, you’ve got James Bay to the left, with Moosonee, and thousands of years of rebound from the ice age, then you've got Lac à l'Eau Claire and coming across Quebec.

Then you catch the St. Lawrence pouring all that water out into the ocean. You can see all the Maritime provinces ... there’s Sable Island off to the distance, up to the north Newfoundland and Labrador and the ruggedness of that coast hitting the water. And all of textures, all of the history and the geology, all the people, and all of those stories, all in the time it takes to sip a cup of tea. It’s an amazing way to see our country. 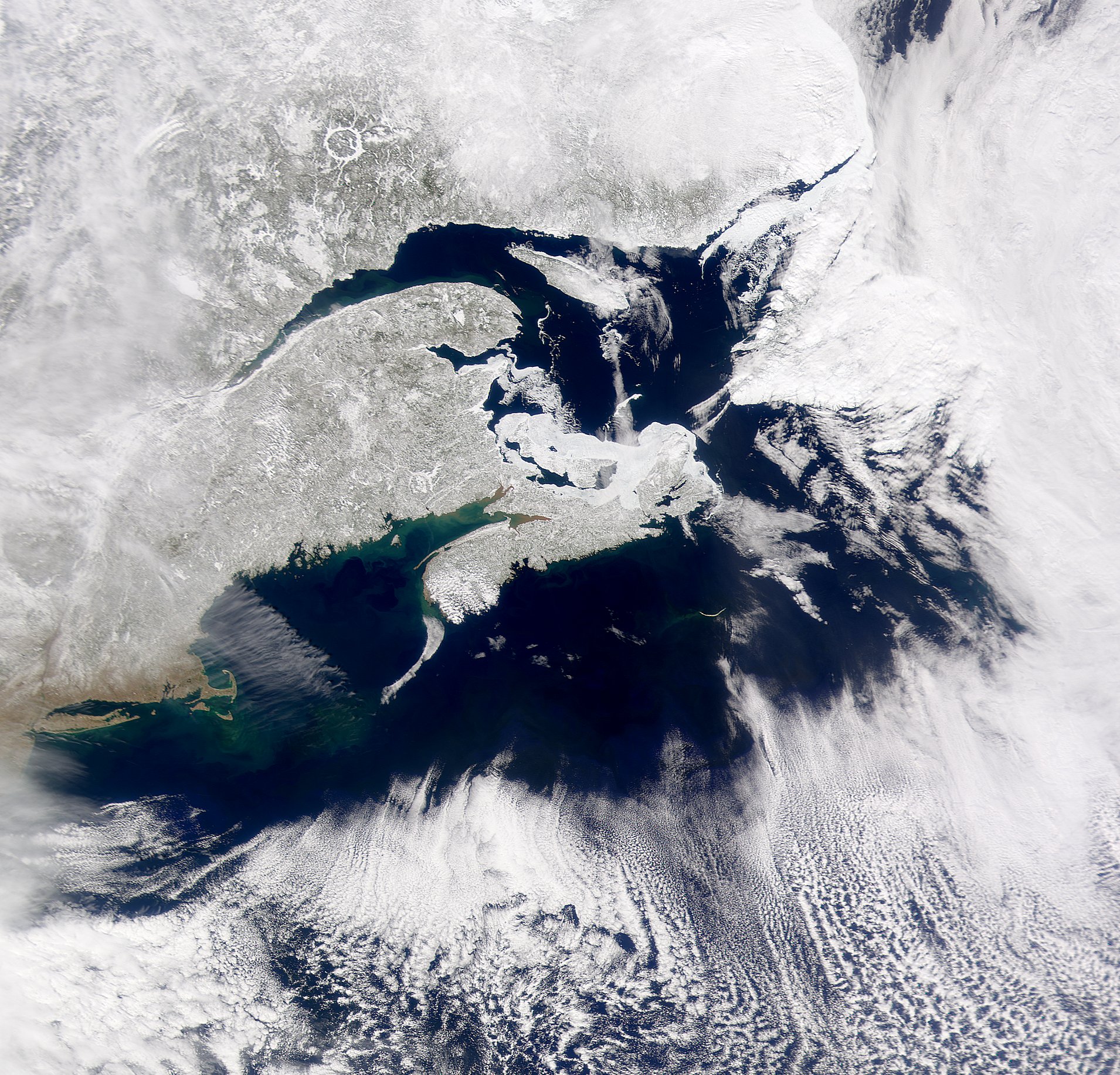 I’m going to go to the Great Lakes now … in the winter time, lake-effect snow obviously just destroys us down here. What does it look like from near-earth orbit?

It looks like a brush stroke. It looks as if someone just artistically looked at the lakes, and took, like, a handful of sprinkles and just went “Tcch!” downwind of the lakes.

But you can see it coming of the edge of Lake Huron, you can see if off Georgian Bay, you can really see it off of Lake Erie and the edge of Lake Ontario as it goes across upstate New York and Pennsylvania. You can see which way the wind was blowing, even though you’re … 412 km up, you can look down and go “well, strong wind out of the west.” Because you can see where water has been picked up off of the lakes, and then frozen in the sky, and then dumped as all the little crystals of snow reflecting the light back to you just down wind of the lakes.

It’s just so crystal clear as to what’s happening below you. You know it’s causing havoc on the 400, but there’s a certain beauty to it if you can get far enough away to see it for what it truly looks like. 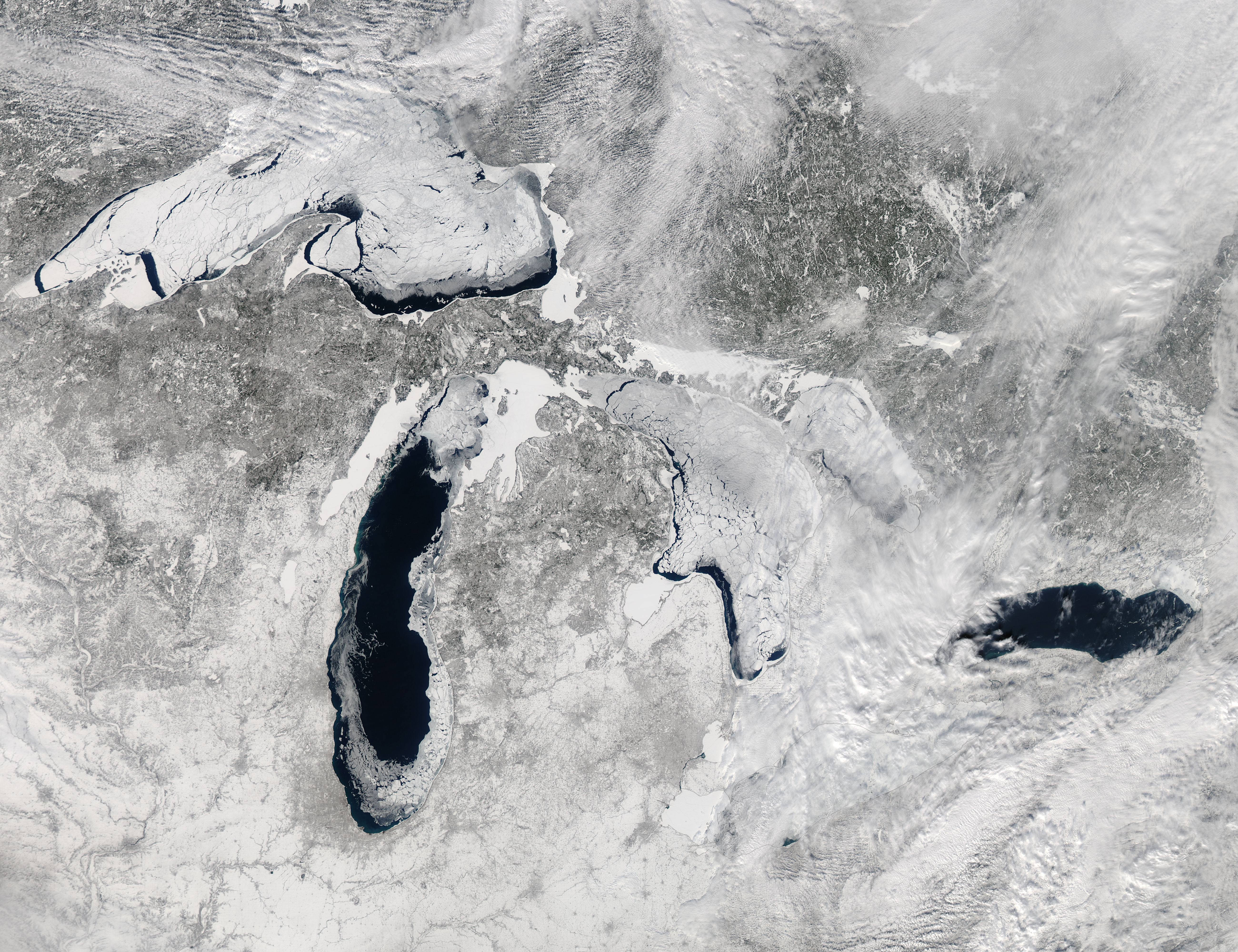 Playing on that, when you’re up there and you’re looking at it, and then you come back around 90 mins later, are you looking down saying “man, are they getting a beatdown today?”

Yeah, normally if a place is really getting hammered, then it's covered with cloud. And you just look down, you can see cloud that's so thick its even dark from above, and you realize, wow, they’re just getting a real dumping on today from the weather.

But the beauty of lake-effect snow is the lake is usually pretty clear as the wind picks up the water, so it becomes much more gentle...

But yeah, you become intimately aware of the world's weather, and you commiserate with the people who are under the worst of it, whether it’s a thunderstorm or a blizzard across Canada.

You’ve obviously seen a really good share of hurricanes and a lot of tropical weather in your time, whether it’s a typhoon or a monsoon or a hurricane, but a major blizzard, do they look any different from outer space? 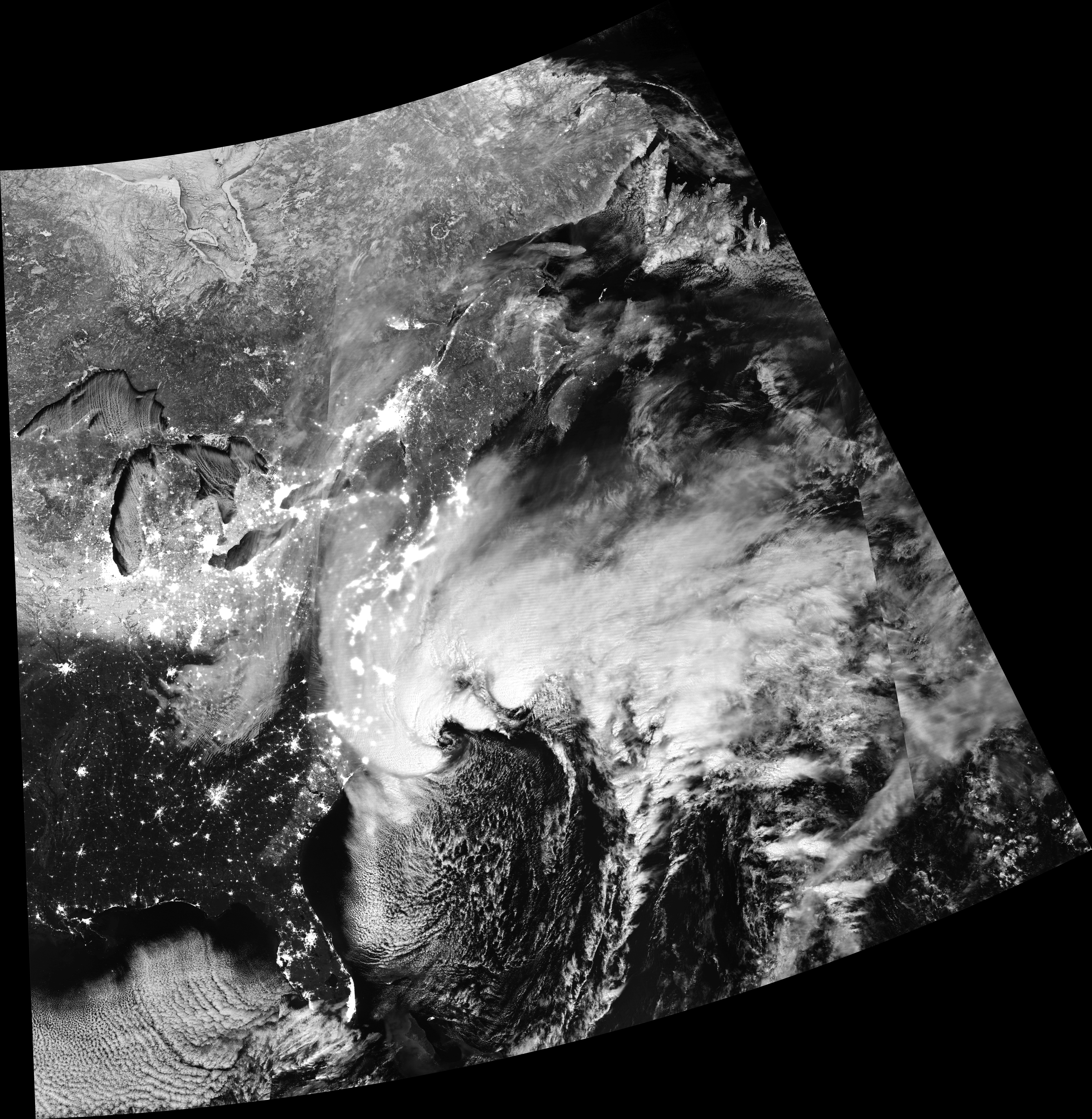 Yeah, there comes this huge opaque mass … and it’s normally being fed from somewhere. It’s coming off Great Bear or Great Slave, or its coming off the lakes of Manitoba, or more often than not just coming off the Great lakes, and just punishing the people who are just downwind of it and catching all of that power.

I mean, I love snow, I’m a downhill skier, I used to race …. But it’s the result of snowstorm that you like, not the storm itself.

So when you’re up there, and you’re looking down, and its winter, do you miss it?

You’re so busy on spaceship that you don’t really miss stuff. I mean, it’s like, while you’re skiing down a hill, what do you miss? You know, jeez, I’m skiing down a hill! I’m not missing stuff, I’m loving what’s happening right now.

Life on a spaceship is just an inexorable sequence of demands and events and schedule and work, so no, you don’t really miss stuff. I mean, you’re on a spaceship, and the world’s underneath you, and you’re going around the planet every 90 minutes. There’s just this onslaught of stimulation and beauty happening around you.

And you’re weightless! You’re, like, you’re an X-Man, you have a superpower. You don’t sit there wishing you were somewhere else. It is as rich and stimulating and thrilling an experience as any period of my life.

WATCH BELOW: WHY EVERYONE IS SUPER JEALOUS OF THE ISS


So I don’t miss the Earth while I’m there, but then again, its been a big part of my life, and I don’t really miss my own past. For me, it’s just wonderful things that have happened that have brought me through to today to get ready for this winter.

Got snow tires on the car, my skis are in the ski bag, and we’re making ski plans -- I was talking skiing last night with a friend. So yeah, I like winter. I’ve lived in a bunch of different places, I’ve lived in Houston, and southern California and Maryland, and I like the four seasons. I like the rhythm of it, I like what it does to nature. There’s nothing prettier than a sunny fall day, or the first smell and hint of spring.

I’ve lived in places that have one season, and I prefer the natural cycle that we get in a lot of Canada -- although some would say that our only seasons are this winter and next winter -- but it depends where you live! I really like the cycle of the patterns of the years here, and it’s really nice to be living back in Canada after serving oversees and outside of Canada for so long.

Chris Hadfield is a former astronaut with the Canadian Space Agency. He commanded the International Space Station from March to May 2013, the first Canadian to do so.