Expired News - Cassini wows us with new pics of Saturn's north pole hexagon - The Weather Network
We use cookies on this site to improve your experience as explained in our Cookie Policy. You can reject cookies by changing your browser settings.   READ MORE I ACCEPT

News
Editor's Choice
Science behind destructive derechos
NASA's Cassini spacecraft is about to embark on nearly 5 months worth of wide looping orbits, designed to bring it closer than ever to Saturn's rings.
OUT OF THIS WORLD | What's Up In Space - a weekly look at the biggest news coming down to Earth from space

Wednesday, December 7, 2016, 7:49 PM - NASA's Cassini probe beams back awesome new pictures from its new ring-grazing orbits, Europe's newest Mars orbiter treats us to its first images, and a new Earth-gazing satellite shows off the amazing high-resolution pics it is capable of. It's What's Up In Space!

Cassini wows us as it begins its final orbits

NASA's Cassini spacecraft is now on its final set of orbits before the mission end in 2017, and it certainly isn't slacking off.

On December 6, the mission team released these incredible images the probe snapped, giving us another amazing look at Saturn's north polar hexagon.

This collage of images from NASA's Cassini spacecraft shows Saturn's northern hemisphere and rings as viewed with four different spectral filters. Each filter is sensitive to different wavelengths of light and reveals clouds and hazes at different altitudes.
Clockwise from top left, the filters used are sensitive to violet (420 nanometers), red (648 nanometers), near-infrared (728 nanometers) and infrared (939 nanometers) light.
The image was taken with the Cassini spacecraft wide-angle camera on Dec. 2, 2016, at a distance of about 400,000 miles (640,000 kilometers) from Saturn. Image scale is 95 miles (153 kilometers) per pixel.

"This is it, the beginning of the end of our historic exploration of Saturn. Let these images - and those to come - remind you that we’ve lived a bold and daring adventure around the solar system’s most magnificent planet," Carolyn Porco, Cassini imaging team lead at Space Science Institute in Boulder, Colorado, said in a NASA news release.

The European Space Agency may have lost their Schariapelli Mars lander, but the Trace Gas Orbiter - now circling around the Red Planet - is functioning as expected, and here's its very first look at its new home and subject of study.

A showcase of some of the first and highest resolution images acquired by the Colour and Stereo Surface Imaging System (CaSSIS) on the ExoMars Trace Gas Orbiter on 22 November 2016.
The first image sequence shown was taken at a distance of 5300 km with a resolution of 60 m/pixel, about 44 minutes before closest approach. It illustrates how CaSSIS acquires data by taking images in colour simultaneously: at panchromatic, red, near-infrared and blue wavelengths.
A 3D reconstruction of a small area in Noctis Labyrinthus is also presented, based on a stereo pair of images taken, and presented with an altitude map with a resolution of less than 20 m.
Next, a spectacular high-resolution image sequence acquired during closest approach of 235 km altitude is presented. At this time, the spacecraft was flying over the Hebes Chasma region. The highest resolution data acquired is at 2.8 m/pixel. The flyover is shown at half the speed at which the data were acquired.
Then, an image swath about 25 km wide is shown of Arisa Chasmata, which is located on the flanks of a large volcano on Mars named Arsia Mons.
Finally, a close up of a 1.4 km-diameter crater sitting in the rim of a much larger crater near the Mars equator is presented. This image was acquired at 7.2 m/pixel.

From here, TGO will continue to orbit the planet, looking to catalogue the least abundant components in Mars' atmosphere - methane, water vapour, nitrogen dioxide and acetylene. According to the ESA, methane is of great interest, since it is a product of biological activity here on Earth, as well as some geological processes. Examining how much methane there is, as well as tracking its concentrations, may narrow down exactly which processes are producing the gas in Mars' atmosphere.

A new satellite has set itself up in orbit around Earth, specifically for the purpose of imaging the planet's surface, and the first samples it has returned are simply amazing.

The left hand side of the slider is a screen capture from Google Maps' Earth view, showing the Yoyogi National Gymnasium in Shibuya, Tokyo. This image, as with most (if not all) of Google Map's high-resolution urban images, is an aerial photograph, taken by aircraft flying 240 to 460 metres above the ground.

The right hand side of the slider is the very first public image from DigitalGlobe's new Worldview-4 satellite, which was launched into space on Friday, November 11, 2016. The high-resolution image it captured shows off Yoyogi National Gymnasium at an incredible 30 centimetres per pixel, and it does so from an altitude of 617 kilometres above the ground. That's about 200 kilometres higher than the orbit of the International Space Station!

DigitalGlobe's satellite constellation - Worldview-1, Worldview-2, Worldview-3 and Geoeye-1 - have already been returning detailed imagery from Earth orbit, and were even used to track the damage to Fort McMurray due to the devastating forest fire that impacted the area in May and June of this year. 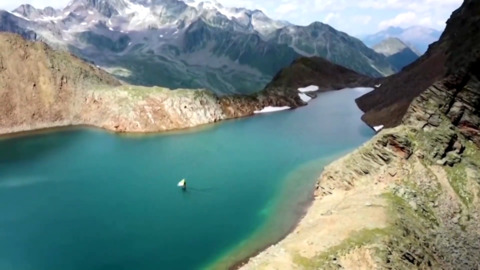