Expired News - Canada in 2030: Frequent, more intense wildfires a reality - The Weather Network
We use cookies on this site to improve your experience as explained in our Cookie Policy. You can reject cookies by changing your browser settings.   READ MORE I ACCEPT

Saturday, August 11, 2018, 10:00 AM - West coast fires have dominated weather news lately - California is experiencing the biggest fire that the state has ever seen and as of Wednesday British Columbia had 460 wildfires burning, which is more active fires than any single day of 2017, the year of the province’s worst ever wildfire season. What will wildfires in western Canada be like in 2030 if we don't effectively fight climate change?

In Water, Fire, Earth, Air - a four-part series - we will look at how climate change will affect different regions in Canada by categorizing the regions by element to provide a unique and comprehensive understanding of how Canadian life could change, assuming our carbon dioxide emissions continue along a business as usual scenario.

Wildfires are a critical function of healthy ecosystems and natural life cycles. Certain cones and fruits, such as the lodgepole pine, can only release seeds after the heat from fires have melted the resin that trapped them in and some plants reach full flowering stages after surviving fires. However, human life and property are significantly at risk from wildfires and in recent years fire activity in western Canada has cost billions and displaced thousands. Since climate change is making temperatures hotter, does that mean that the heat is making fires worse?

A firetruck rushes past flames that overran a road at the River Fire (Mendocino Complex) in Lakeport, California, U.S. July 31, 2018. Credit: REUTERS/Fred Greaves

Climate change affects wildfires in number of complex ways and scientific studies show that extreme heatwave patterns, declining forest resilience to warmer temperatures, and increased lightning are all aspects of climate change that are making wildfires more severe and burn for longer.

By 2030 communities in western Canada will become increasingly strained by dramatically changing wildfire seasons, and national commitments for preventing climate change are falling behind schedule. The signatories of the Paris Agreement are aiming to keep global warming below 2 degrees Celsius from pre-industrial levels, and Canada has fallen behind other countries and will likely miss it’s target. In late 2017 Commissioner of the Environment and Sustainable Development Julie Gelfand said that Canada will likely fail to meet 2030 carbon reduction targets and is not prepared to adapt to the catastrophic impacts of climate change that will devastate the economy and significantly threaten society's well-being.

This graph shows the trend of Canada's carbon dioxide emissions over time, the 2030 target, and the probable projections of Canada’s future carbon emissions. Canada has to reduce emissions by over 200 megatonnes, and amount that is equivalent to how much Alberta emits in one year. Source: Environment and Climate Change Canada

Given the likely scenario that Canada will continue on a 'business as usual' pathway and probably won't implement transformative environmental policies, how will climate change affect forest fires in western Canada in 2030?

FAST FACTS - CLIMATE CHANGE AND WILDFIRES IN ALBERTA AND B.C.

● There's been a global decline in carbon dioxide emissions from wildfires, except for Canada

GLOBAL DECLINE IN CARBON EMISSIONS FROM WILDFIRES, EXCEPT FOR CANADA

As reported by The Star, global carbon dioxide emissions from wildfires declined in the last 90 years as populations grew, forests have been converted into croplands, and better fire management practices have been developed. The study, published in Nature Communications, notes that while the carbon emissions from wildfires decreased globally, certain regions experienced increases in emissions, and one of those was Canada.

The Fort McMurray wildfire in 2016 cost approximately $3.6 billion which made the most expensive disaster for insurers in Canadian history, burned for over three months, and released over 77 megatonnes of carbon. Just one environmental disaster can completely throw off Canada's carbon budget, particularly since Canada has committed to reducing emissions by just over 200 megatonnes by 2030. This wildfire released nearly half of the amount of carbon that needs to be reduced, and indicates that meeting our carbon reduction goals will be increasingly difficult with more frequent and longer burning wildfires. Numerous studies demonstrate that climate change contributed to the severity of the Fort McMurray wildfire because drought conditions made the soil and foliage dry, which became an abundant source of fuel that let the fire burning intensely and spread rapidly.

The following year didn't see fires the size of Fort McMurray, but B.C. had the worst wildfire season on record. Climate change is causing annual temperatures to be warmer, more drought, and increasing the frequency of heat waves, which all result in longer fire seasons. This summer has seen some scorching heat records and it is currently so dry in B.C. that it only took 20 seconds for a deliberately set fire to spread through an entire neighbourhood. This study analyzed the historic and future fire frequency in Canada and found that fire spread days could increase by 35 - 400 per cent by 2050 with some of the greatest increases occurring in Alberta and other regions in the Boreal Plains.

Some might be surprised to learn that 45 per cent of all fires in Canada are caused by lightning, which is responsible for 81 per cent of all area burned. Global lightning patterns are being altered by changing storm convection, atmospheric moisture levels, and atmospheric air rise a NASA-funded study found that lightning is sparking more wildfires in North American boreal forests.

Just an increase of 1 degree Celsius increases lightning by approximately 12 per cent, which means that controlling wildfires as the climate changes could require innovative management strategies to include lightning management. One study suggests that wind-energy farms could be built relatively close to areas with large forests to divert wind and lightning - wind intensifies fires, so the turbines could capture this kinetic energy as well as attracting lightning towards their structures and away from the forests.

HALF OF ALBERTA'S BOREAL FORESTS COULD VANISH BY 2100 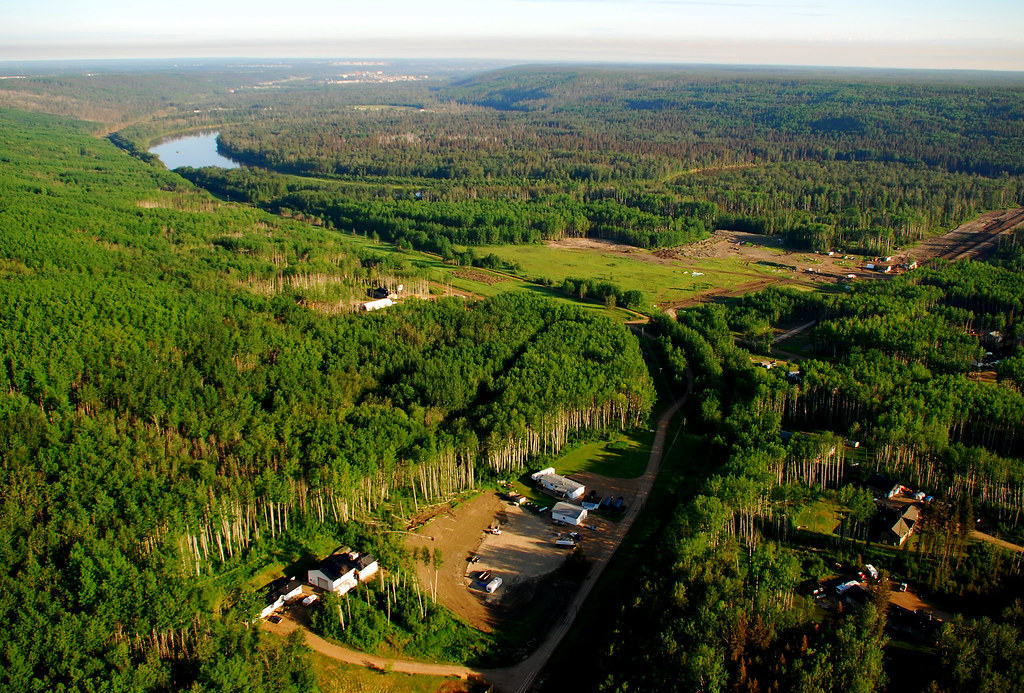 The boreal forest has intrinsic value to Canada - it is part of it's history, economy, and heritage and is home to many species and communities. As wildfires become more frequent and intense, a greater amount of old trees burn away. While new trees do grow back, repeat wildfires that quickly follow each other will prevent trees from reaching maturity, and a study projects that at least 50 per cent of Alberta's young deciduous forest and grassland by 2100. This estimate is likely on the conservative side, since this study only modelled climate and wildfire disturbance and did not include the impacts from drought or human activity.

● Wildfires will become an increasingly large source of carbon dioxide emissions, which will increase the complexity of evaluating Canada's progress for meeting target carbon reductions.

● Atmospheric temperatures will continuing their warming trend, which will bring more drought conditions and heat waves. Many regions will see record-breaking summer temperatures and will have to adapt land-management practices to drier, warmer conditions.

● Forestry management will see larger fluctuations on a year-to-year basis and will need to implement strategies to monitor fire-risk and foliage buildup. Mitigation efforts, such as installing lightning rods, could become critical for preventing wildfires caused by increased lightning.

● Alberta's landscape will change as wildfires become more frequent and wipe out older vegetation. Conservation efforts and increased protected areas will be required to maintain the historic landscape, and the forestry sector will have to account for dwindling resources, which could have large impacts on the economy and employment opportunities.

● The cost of wildfires largely falls on provincial governments - taxpayers in Alberta and B.C. will have to make decisions about government spending on changing wildfire prevention and relief.

WATCH BELOW: The first pod hotel to open up in Canada and we got a look before anyone else