Expired News - While you were sleeping: Rubber duck asteroid sails by Earth - The Weather Network
We use cookies on this site to improve your experience as explained in our Cookie Policy. You can reject cookies by changing your browser settings.   READ MORE I ACCEPT

News
Editor's Choice
Fiona: Difficult cleanup ahead for Atlantic Canada
Massive asteroid 2014 JO25 flew safely past Earth on the morning of Wednesday, April 19, and NASA astronomers captured some amazing images of the giant space rock, by pinging it with radar. The result? It looks like a rubber duck!
OUT OF THIS WORLD | What's Up In Space - a weekly look at the biggest news coming down to Earth from space

While you were sleeping: Rubber duck asteroid sails by Earth

Thursday, April 20, 2017, 12:19 PM - Massive asteroid 2014 JO25 flew safely past Earth on the morning of Wednesday, April 19, and NASA astronomers captured some amazing images of the giant space rock, by pinging it with radar. The result? It looks like a rubber duck!

Despite some headlines and stories that were spreading around prior to this flyby, this huge, bright asteroid was NOT "hurtling towards Earth." Nor was it making a "frighteningly" or "uncomfortably" close pass. One story even sported a headline that said a "nuclear 'Hail Mary'" was "almost necessary" to stop this asteroid.

While these headlines stoked fears, 2014 JO25 was, instead, making a completely safe pass by our planet.

The closest it came, at 8:24 a.m. EDT (12:24 UTC) on April 19, was around 1.8 million kilometres away, or 4.6 times farther away than the Moon. That is the closest the asteroid has ever come to Earth in the past 400 years, and it was the closest it will come to us until at least the year 2500. At the same time, though, it represented absolutely no danger to us, as astronomers had confirmed its orbit during observations in 2016, and knew that it would fly past harmlessly. Any discussion of a nuclear response was pure speculation by NASA astronomers about how we would respond to such as asteroid, if it were actually going to hit us, rather than any particular response that may have been needed for this asteroid.

The best part of this was the fact that astronomers with NASA's Goldstone Observatory, in California, and the Arecibo Observatory, in Puerto Rico, were pinging the asteroid with radar before, during and after its flyby. Using the results of those observations, they have already given us a look at this amazing denizen of the solar system. 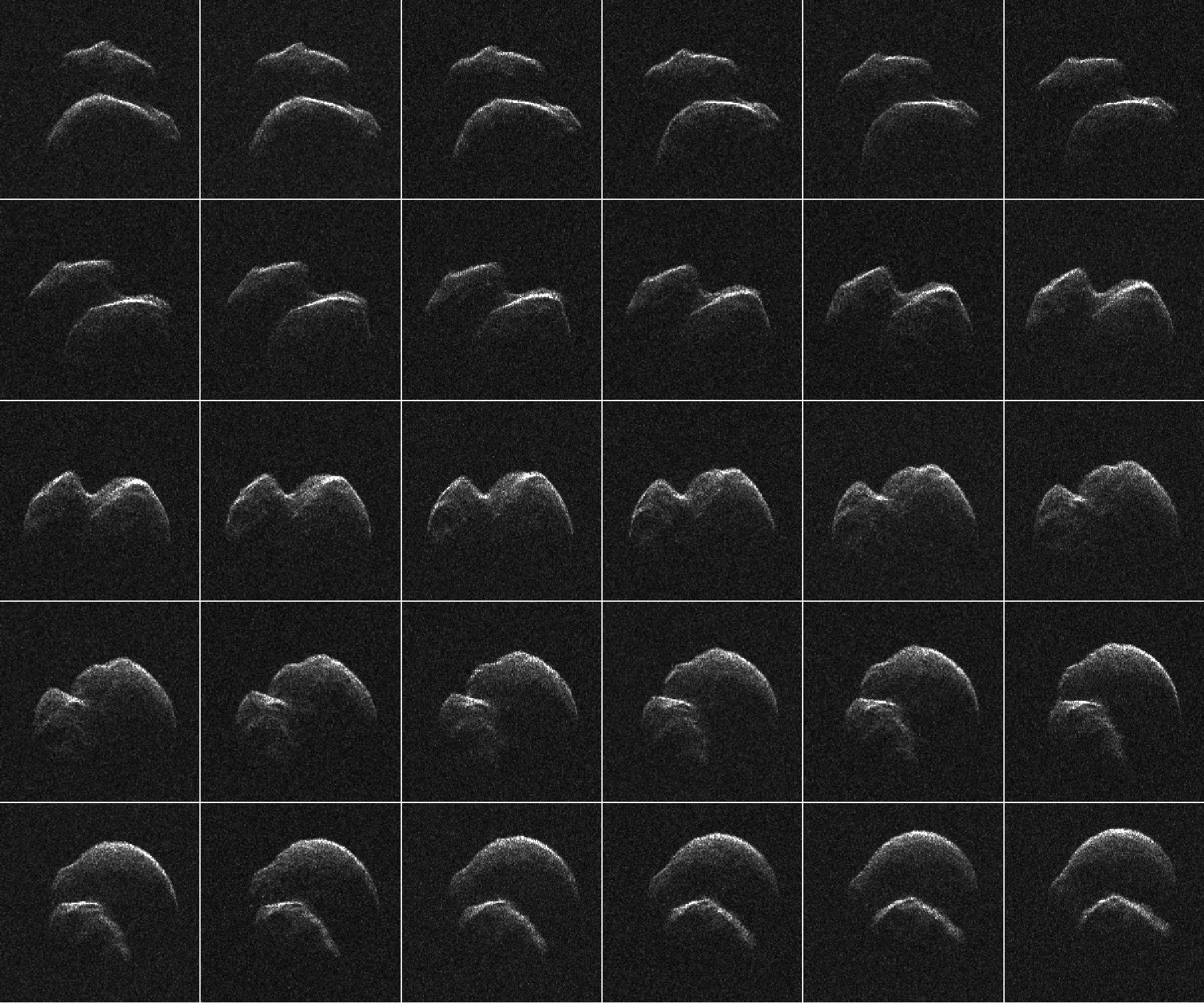 According to NASA, these radar images were taken when the asteroid was approaching Earth, and was at a distance of about 3 million kilometres away, and map the asteroid's Earth-facing side with a resolution of about 7.5 metres per pixel. They reveal that it has a "contact binary" shape, so it looks a bit like a peanut, a piece of popcorn, or a rubber duck. NASA says that the larger of the two lobes has been measured at roughly 620 metres across! 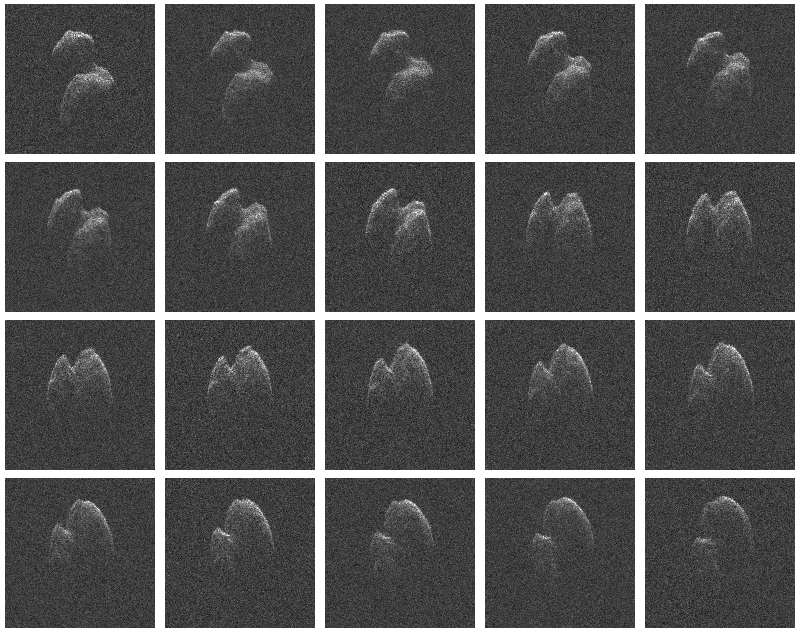 These measurements by Arecibo Radar reveal more of the surface features - possibly even boulders on the surface - and show that the asteroid is at least 650 metres long, and rotates every 4.5 hours.

Contact binaries are asteroids or comets that either didn't quite manage to completely join together in the first place, or they broke apart at some point, perhaps due to an impact with another object. The two pieces remain gravitationally bound to each other, and over time, they got close enough to touch, and a "neck" of material formed between the two. This same shape was seen when the ESA Rosetta mission flew out to Comet 67P/Churyumov-Gerasimenko.

Further observations, using the Goldstone "Venus" 34-metre dish (DSS-13) and the Green Bank Observatory, are expected to produce a radar map of the surface of 2014 JO25, down to a resolution of less than 2 metres per pixel!

2014 JO25, a roughly 1-kilometre wide asteroid, was discovered back in May 2014, by astronomers at the Mount Lemmon Observatory, located in the Santa Catalina Mountains, near Tucson, Arizona.

At the time, it was classified as a "potentially hazardous asteroid," or PHA, due to the fact that it was bigger than around 150 metres wide, and the projected closest distance from Earth on some of its orbits would bring it closer than 7.5 million km. Any asteroid that satisfies these two criteria is classified as a PHA, regardless of whether or not they actually pose a threat to us.

As NASA says on their Near Earth Asteroid website:

This 'potential' to make close Earth approaches does not mean a PHA will impact the Earth. It only means there is a possibility for such a threat. By monitoring these PHAs and updating their orbits as new observations become available, we can better predict the close-approach statistics and thus their Earth-impact threat.

In the case of 2014 JO25, the initial observations from 2014, along with other records traced back to 2011, and observations since it was first identified, have refined its orbit and shown that it poses no threat to us now, and is unlikely to be a threat in the future.

While this was a completely safe flyby, it has still caused some excitement, because of the opportunity it represents.

Most asteroids that pass by Earth, even ones that skim by at very close distances, are small and dark. Thus, while the biggest telescopes may be able to spot them, there's really not much to see and little opportunity for the amateur stargazer.

In this case, 2014 JO25's size and distance are making it an excellent target, but it has also been found to be quite bright, reflecting around 25 per cent of the light it receives from the Sun. To put that into context, that's roughly five times brighter than your typical asteroid, over six times brighter than a comet nucleus (which tend to reflect as much light as a lump of charcoal), and it's nearly twice as bright as The Moon!

So, now that 2015 JO25 has passed by, it's a great opportunity for backyard astronomers to join in on the observations, as the asteroid is expected to reach magnitude 11 brightness - just above the brightness that a small backyard telescope can pick out (given ideal conditions).

Consider downloading and running the free astronomical software Stellarium, to track the asteroid's position, but the night of April 19-20 will most certainly have the best viewing potential, as 2014 JO25 will become dimmer as it gets farther away. If the asteroid isn't already available to you, via the program's search engine, simply use the Solar System Editor (under Plugins in the Configuration window) to add it to the list of PHA's available.

Watch Below: Curious about how you make a radar map of an asteroid? JPL Radar Scientist Marina Brozovic showed us how its done back in October 2015.