Expired News - 15 Days of Darkness in November? It's not going to happen - The Weather Network
We use cookies on this site to improve your experience as explained in our Cookie Policy. You can reject cookies by changing your browser settings.   READ MORE I ACCEPT

News
Editor's Choice
Get the best deals on weather products this Black Friday
OUT OF THIS WORLD | Earth, Space and the Stuff In Between - a daily journey through weather, space and science with meteorologist/science writer Scott Sutherland

15 Days of Darkness in November? It's not going to happen 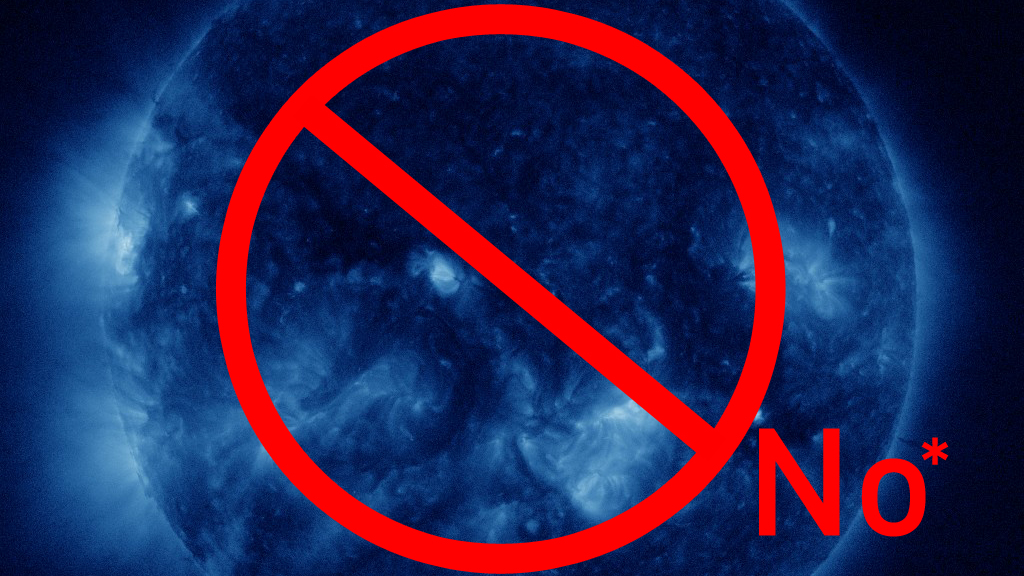 *Unless you are looking at NASA's Solar Dynamics Observatory website. Credit: NASA/S. Sutherland

Wednesday, October 26, 2016, 5:52 PM - The internet has, once again, turned the crank on the November "Days of Darkness" hoax, by rolling it out for yet another year so that it can make the rounds on social media and stir up trouble and anxieties. So, here, once again, are the details of this hoax, and how the claims behind it are simply not possible.

It just so happens that, lately, we've had some fairly active space weather. High speed particles streaming out of some large coronal holes on the Sun, along with a few week coronal mass ejections, have been interacting with Earth's magnetic field. This has sparked off some impressive displays of the Aurora Borealis over the past few weeks, which has been a delight for skywatchers and the rest of us as well, as it has meant a stream of amazing pictures showing up on social media.

There is a persistent rumour on the internet, however, that has been spreading a particularly nasty (and entirely untrue!) story about the Sun.

Supposedly, if this rumour were actually true, an "astronomical event" between Venus and Jupiter will touch off an explosion on the Sun, which will result in Earth plunging into darkness lasting for 15 days, starting on November 15 and ending on November 30.

Fortunately, there's nothing in this rumour that is even remotely plausible.

First, the story originated on the fake news website, Newswatch33.

Second, the story stated that this would be due to "an astronomical event between Jupiter and Venus," which would involve an explosion of hydrogen gas from Jupiter, set off due to Jupiter's atmosphere becoming heated by light reflected off of Venus. 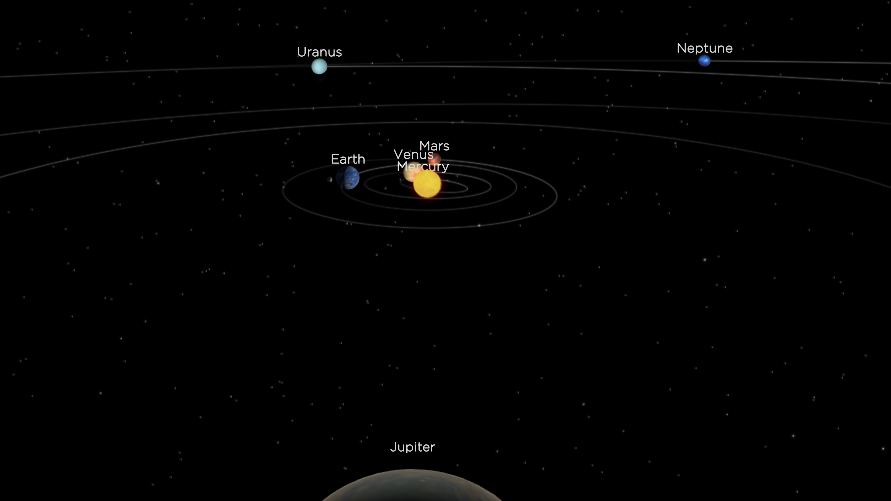 A view of our solar system for November 15, 2016. The sizes of planets and Sun are exaggerated for detail. Credit: solarsystemscope.com

The above image shows the view of the inner solar system and beyond, from behind and above Jupiter. Although Venus would be nearly "full" from the perspective of Jupiter, it is so close to the Sun as to be completely lost in its glare (should anyone be at Jupiter and be looking). Since the Sun is over 600 million times brighter than Venus, there's no chance of the comparatively minuscule amount of light reflecting off of Venus having even the tiniest of effects on Jupiter's atmosphere.

Well, to start, if the Sun's surface dimmed, it would certainly not turn blue.

Blue is reserved for some of the hottest stars in the universe - giants that dwarf our Sun and whose surface temperatures are around 20,000 Kelvin or higher. By comparison, our Sun's surface is only 6,000 K. If our Sun's surface actually did get dimmer, it would turn red, like a red dwarf star.

The story uses a blue image of the Sun similar to the one shown to the right, supposedly as an example of what we would see. This view of the Sun, however, is from NASA's Solar Dynamics Observatory, and it actually shows an image where all the light is filtered out except from parts of the Sun that have temperatures around 2.8 million Kelvin, to highlight active regions of the Sun's corona. The Sun isn't actually blue at those temperatures, though. The SDO team simply used blue as a base colour for the image to set it apart from all of SDO's other views of the Sun.

Next, if there actually was a gas eruption from Jupiter, it's doubtful the gas cloud would get anywhere near the Sun.

Regardless of the fact that the Sun exerts a gravitational force on everything in the solar system, even if a gas cloud was launched directly out of the sunward side of Jupiter at high velocity, it still would be fighting "against the current" of the solar wind the whole way. Like smoke in the wind, a hydrogen gas cloud in the solar wind would be mixed up and dispersed, and any coronal mass ejection being thrown off the Sun would sweep up the remnants of such a cloud on its way towards the outer solar system.

Just for the sake of argument, if a cloud of hydrogen from Jupiter were to actually make it to the Sun, we wouldn't even notice it. The idea of it setting off an explosion seems to imply that the gas would be much cooler than the Sun, and thus it would ignite. However, as the gas spiraled inward, its temperature would gradually rise as it was bathed in the Sun's radiation. By the time it arrived at the Sun's surface, it would be barely distinguishable from the rest of the ionized hydrogen boiling there. There is no reason why adding more heated, ionized hydrogen to the Sun's surface would set off any kind of explosion, let alone a massive reaction from the star's core.

Fourth and final, the story claims that all of this was revealed in a document released by NASA, and delivered to the White House in a briefing from NASA Administrator Charles Bolden. Mr. Bolden is definitely the current NASA administrator, however, no such document was released and no such briefing was ever given.

How do we know this?

Each of these is simply a re-telling of the same hoax story, just with the dates and number of days changed, again and again.

NASA addressed it in their 2012 article and video, titled Beyond 2012: Why the World Didn't End, and in 2011, as they answered questions about Comet Elenin. Even now, the answers they provided then still carry weight, as this isn't simply about a specific planetary alignment, or even set of alignments. It's the fact that - based on science - what the story describes is simply impossible.

Note: Originally published in October of 2015, this article has been updated for the fresh re-emergence of this internet hoax.

Watch Below: Now that you know the Sun won't be plunging us into darkness, enjoy these spectacular views of solar activity provided by NASA.