Expired News - Weather to become more extreme as the Jet Stream changes - The Weather Network
We use cookies on this site to improve your experience as explained in our Cookie Policy. You can reject cookies by changing your browser settings.   READ MORE I ACCEPT

Weather to become more extreme as the Jet Stream changes

Using data from weather events like the 2003 European heat wave, the 2010 Pakistan flood and Russian heat wave, and the 2011 Texas and Oklahoma heat wave and drought, the authors have run multi model simulations to show how changes in the Jet Stream pattern are linked to the occurrence of these extreme weather events.

As an example, take a look below at the Meteosat image below showing how dry the landscape looks over Great Britain earlier this year (May 2018 right vs July 2018 left). 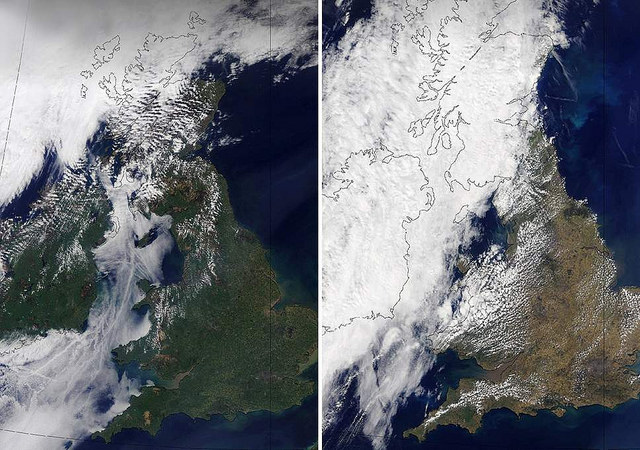 As greenhouse gases continue to accumulate in our atmosphere we should expect more unusual Jet Stream patterns in the Northern Hemisphere. We already had an event of this magnitude during the summer of 2018, one characterized by a series of extreme weather events especially in North America and Europe.

If greenhouse gas emissions continue to escalate at the current rate, these type of anomalous weather patterns could increase up to 50% by the end of the century. 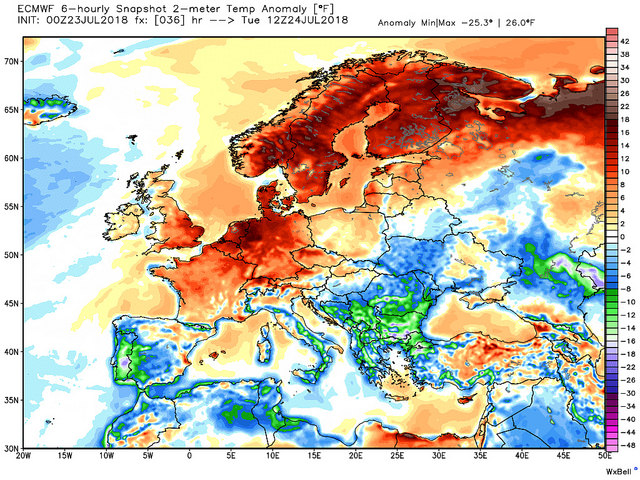 Observations show that during the past 15 years, the Jet stream has been curling-up, moving further north and south than usual. On occasions, when it remains in an extreme north or south position for days or even weeks, it can bring extreme weather events to a given region.

Dr. Michael Mann, leading scientist of this study and professor in the Department of Meteorology and Atmospheric Science at Penn State University, refers to this wavy pattern as a "quasi-resonant amplification," This atmosphere set-up occurred during the summer of 2018, when a large scale jet pattern associated with unmovable high pressure centers over the western U.S. and Europe brought record temperatures, flooding and wildfires to different areas of both continents.

How much of a change we see in the behavior of these powerful upper level winds that steer weather systems, will depend on the rate at which greenhouse effect enhancement occurs. The study published in the Journal of Science Advances, does not rule out a tripling of the number of extreme jet stream events in a worst case scenario situation where greenhouse gas emissions remain much above what we is expected. 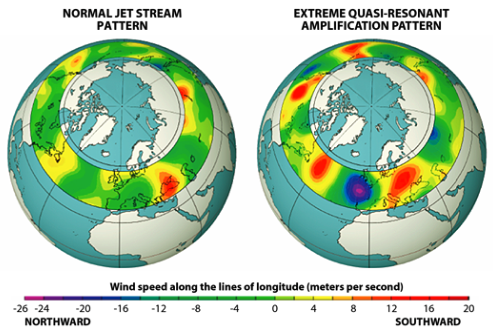 Footnote: During the quasi-resonant amplification pattern of the Jet Stream, the wet stormy areas (blue) and hot, dry zones (red) intensify, expand and remain over a given area for a longer period of time.

In the next 10 to 30 years, aerosol concentration in the Northern Hemisphere is expected to decrease as more countries make an effort to improve their air quality to reduce health related issues. Aerosols actually cool the atmosphere and partially help counteract the warming effect that can alter the Jet Stream configuration. If as projected, aerosol concentrations drop, the cooling effect would be reduced and middle latitude regions of the Northern Hemisphere would warm more than expected thus enhancing the anomalous behavior of the Jet Stream. 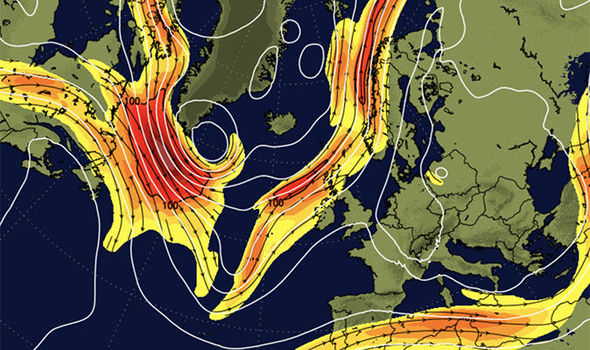 The recent results here presented add new evidence to this connection between amplified Arctic warming and extreme mid-latitude weather in summer. The Jet Stream anomaly patterns are especially impactful when they last longer than usual, since the extreme weather pattern occurring can churn on a given area for days and days.