Expired News - Tornado? Funnel Cloud? Landspout? What's the difference? - The Weather Network
We use cookies on this site to improve your experience as explained in our Cookie Policy. You can reject cookies by changing your browser settings.   READ MORE I ACCEPT

News
Editor's Choice
Challenging May long weekend weather for most
Science Behind The Weather: Funnel or tornado
OUT OF THIS WORLD | Science Behind the Weather

Monday, May 15, 2017, 1:30 PM - As spring dissolves into summer, the threat of severe weather looms, in the form of powerful thunderstorms capable of spawning tornadoes. That said; what, exactly are funnel clouds and landspouts, and what sets them apart from tornadoes?

Late in the afternoon on Monday, August 1, 2016, forecasters with Environment Canada's Ontario Storm Prediction Centre issued a special weather statement, for regions stretching from Windsor and Sarnia all the way to the Greater Toronto Area, that spoke of conditions developing that were "favourable for the development of funnel clouds."

"These types of funnel clouds are generated by weak rotation under rapidly growing clouds or weak thunderstorms," the statement said. "This weak rotation is normally not a danger near the ground. However, there is a chance that this rotation could intensify and become a weak landspout tornado."

So, just what are funnel clouds and landspout tornadoes, and how do they differ from a normal tornado?

A tornado occurs due to a specific combination of effects. First, winds of different strengths and directions at different heights are needed (aka a strong wind shear), which sets up a rotating cylinder of air, even before the storm cell develops. Once the storm is formed and growing, a combination of powerful updrafts of wind deep inside the storm and strong downdrafts at the back of the storm tip the cylinder upright, producing what's known as a mesocyclone (third image in the sequence below). As the updraft beneath the rotating column of air draws in more warm, moist air, this forms an extension beneath the base of the cloud, known as the "wall cloud." As this region of the storm is drawing a significant amount of its influx of air from right above the ground, rather than from the sides, as the interplay of the updraft and downdrafts causes the rotation to quicken, the focus of this influx tightens and we soon see a rotating funnel of condensation descend from the wall cloud to touch the ground.

When that rotating funnel touches the ground. We have a tornado.

So, if that's how a tornado forms, what is a funnel cloud?

Technically, anytime you have the rotating funnel of condensation descending from a wall cloud towards the ground, you have a funnel cloud. 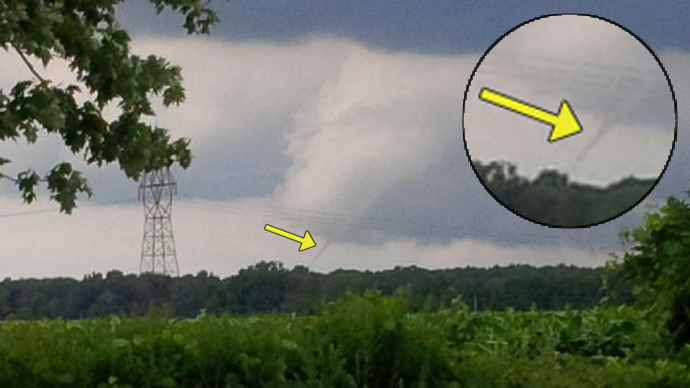 A Funnel cloud seen near Newbury, ON, on August 1, 2016. Photo by Dan Meersseman, submitted to The Weather Network.

You will still hear meteorologists and storm chasers discuss "the funnel cloud of a tornado," since that is the visibly rotating column of the tornado, but some funnel clouds never make it to be a tornado. They begin their descent from the wall cloud and then the processes supporting them weaken. Most vanish in mere seconds. Some can persist for longer.

According to Weather Network meteorologist Mark Robinson, the most persistent funnel cloud he's ever witnessed was one spotted by he and his stormchasing partner Jaclyn Whittal, in May of 2014, which lasted for between 10 and 15 minutes.

A landspout is a type of tornado, typically tube-shaped instead of funnel-shaped, and only lasting a short amount of time - perhaps 10-15 minutes at the most - but there's a big difference between a landspout and a normal tornado.

While a tornado essentially forms from top down, as the mesocyclone inside the cloud produces the wall cloud, and the funnel cloud reaches down from there to the ground, a landspout forms more from the bottom up.

When a surface boundary is present, such as a cold front or a lake breeze front, the surface winds converge towards it, blowing in from different directions on either sides of the boundary. When the winds meet, they set up small whirls, or vortices, in the flow. If storms are generating along the boundary, due to the converging air being forced to rise, the strong updrafts can draw in these vortices and enhance them.

There is no overall rotation inside the cloud, thus no mesocyclone to be picked up on radar. There's no wall cloud hanging down beneath the storm cloud to give away the potential formation of one of these tornadoes. There is usually only a small funnel seen just beneath the cloud base (as shown in the image to the right), and the rest of the tornado tends to be invisible, or very hard to pick out, until it starts to draw debris - dust and dirt, usually - up into the air.

While landspouts form differently and don't last very long, in extreme cases they can still generate winds of over 100 km/h, rivaling the strength of an EF-0 tornado (F1 or even F2 on the old Fujita scale).

A rarity in the GTA

When the special weather statement was issued on Monday, there was an unusual factor that probably caught many eyes.

It was not only issued for counties and regions along the shores of Lake Erie, Lake Huron and around the Greater Toronto Area, but it was also issued for the City of Toronto as well.

Funnel clouds and landspout tornadoes are fairly rare in the Toronto area, however, due to one specific aspect of the metropolitan area - its proximity to Lake Ontario.

"It's the lake breeze," says Robinson.

On bright sunny days in southern Ontario, when winds are generally light, circulations of air set up between the land and the lakes. Air over the land, warmed by the heat emitted by the ground, rises more rapidly than the cooler air over the lake water. This creates something of a "slope" of air pressure, running "downward" towards the lakes. With air rising over the ground and then flowing "down-slope" towards the lakes aloft, this sets up a consistent onshore breeze at the surface, which is known as the "lake breeze."

The lake breezes from Lake Ontario, Lake Huron and Georgian Bay carve out clear patches in the spotty clouds over southern Ontario on August 2, 2016. Credit: NEXLAB/College of DuPage 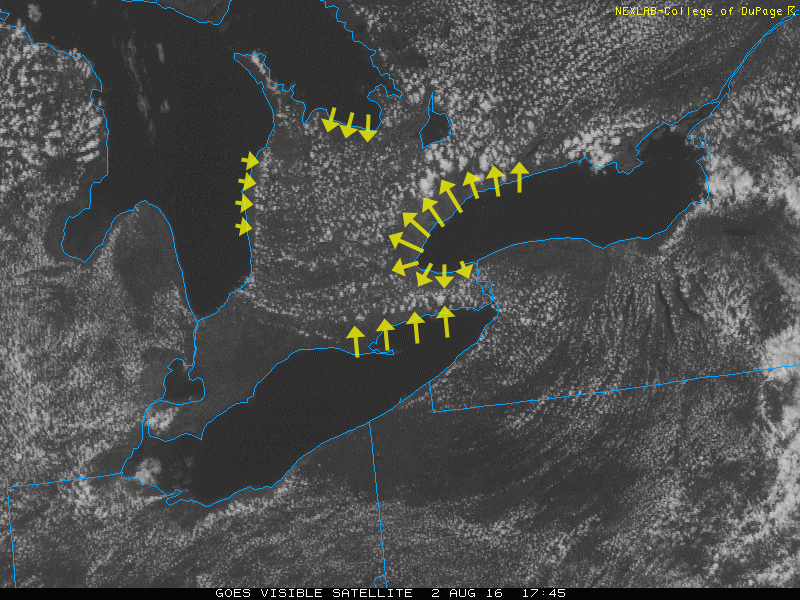 The last frame of the above animation, with arrows indicating the direction and extent of the lake breeze. Credit: NEXLAB/College of DuPage/S. Sutherland

The edge of this lake breeze, where the air is rising, tends to act as a buffer or shield against storms, says Robinson.

It does this by forcing hot, humid, stormy or potentially-stormy air upwards far more rapidly than it would go on its own, thus causing storms to blossom or intensify along these "lake breeze fronts" just as they would along an advancing cold front. When the storm makes it over the lake breeze front, it switches from drawing its energy from the hot, humid air over land to cooler, thus drier, air from over the lake. This tends to weaken the storm and can even cause it to dissipate.

In general, this means that cities right along the lake shore are the ones most protected from the kind of storms that can occur on these hot, sunny days - those with the potential to produce wall clouds, funnel clouds and even tornadoes.

The position of the lake breeze front changes from day to day and even hour to hour, based on various factors. Some days, it may be far north or west of the GTA, forcing storms to expend much of their force and fury there, while leaving the metropolitan area relatively unscathed. Other days, the lake breeze front could be lined up right along the lakeshore, exposing the entire city to downpours and whatever else the storms can throw at us.

Also, the difference in temperature and humidity from one side of the lake breeze front to the other can only be very slight. Thus, if a storm pushes over the lake breeze front and encounters air that's only slightly cooler and less humid than it just left, it can just continue to roll along at or near its original strength.

Watch Below: Meteorologist Jaclyn Whittal explains the science behind waterspouts vs. tornadoes