Expired News - Scientists conclude 'chemtrail conspiracy' has no substance - The Weather Network
We use cookies on this site to improve your experience as explained in our Cookie Policy. You can reject cookies by changing your browser settings.   READ MORE I ACCEPT

News
Editor's Choice
Summer extremes finally relax in Canada in August
OUT OF THIS WORLD | Earth, Space And The Stuff In Between - a daily journey through weather, space and science with meteorologist/science writer Scott Sutherland 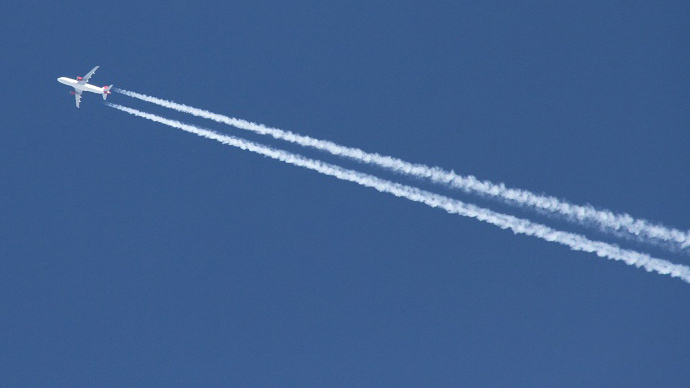 Tuesday, August 16, 2016, 4:58 PM - Are chemtrails being spread across our skies by aircraft, as part of an organized government conspiracy? The first study of this supposed phenomena by a major science organization says no.

Look up in the sky on any typical day, especially if you live near a major airport, and you will likely see thin white lines of cloud. They can be singular, in pairs or as a multitude crisscrossing the sky. They can last a few minutes or persist for hours, and they can even spread out into entire layers of cloud if conditions are just right.

While these condensation trails, or contrails, have been around since the beginning of jet-powered air travel, they have been increasing in number and frequency in recent years - partly due to increases in air travel but also due to climate change - and some people have become concerned that there is something organized, and possibly sinister, going on with them.

This has sparked the chemtrail conspiracy theory, which mistakenly claims that these vapour trails are actually concentrated chemicals, being deliberately released into the air by a secret, large-scale atmospheric spraying program, or SLAP. Depending on the source, these SLAPs are either part of an overall "geoengineering" program, in used to stave off the effects of global warming, but are having an accidental detrimental effect on people's health, or the supposed health effects are intentional, deliberate and sinister in nature.

While there have been efforts to debunk these claims over the years, some even systematically pointing out the errors made by the claimants, it remains one of the more resilient conspiracy theories around. Now, in the first peer-reviewed journal study to take a look at these claims, scientists with the Carnegie Institution for Science teamed up with Mick West of Metabunk.org to survey 77 experts - who specifically study condensation trails or research into how pollution and dust settle out of the air - to see if the claims of the conspiracy theorists have any merit.

"Despite the persistence of erroneous theories about atmospheric chemical spraying programs, until now there were no peer-reviewed academic studies showing that what some people think are 'chemtrails' are just ordinary contrails, which are becoming more abundant as air travel expands. Also, it is possible that climate change is causing contrails to persist for longer periods than they used to." Ken Caldeira, a climate scientist at the Carnegie Institution for Science’s Department of Global Ecology, who co-authored the study, said in a press release on Friday. "I felt it was important to definitively show what real experts in contrails and aerosols think. We might not convince die-hard believers that their beloved secret spraying program is just a paranoid fantasy, but hopefully their friends will accept the facts."

"We wanted to establish a scientific record on the topic of secret atmospheric spraying programs for the benefit of those in the public who haven't made up their minds," study lead author Steven Davis, of UC Irvine, said in the press release. "The experts we surveyed resoundingly rejected contrail photographs and test results as evidence of a large-scale atmospheric conspiracy."

The study, titled Quantifying expert consensus against the existence of a secret, large-scale atmospheric spraying program, is available online.

Watch below: Stephen Davis, of the Carnegie Institution for Science and the University of California Irvine, discusses the study.

What's going on here? What are contrails?

Lack any one of these and you will have a largely cloud-free sky, regardless if the other two are present in abundance. This is especially true of the third requirement. The air above you can be saturated with water vapour, and parcels of warm air can be rising and cooling to reach the dew point temperature, but if there is not a supply of particulate matter for the water vapour to condense out onto, the sky will remain clear.

As jet aircraft cruise along at altitude, their engines leave behind trails of exhaust - a mixture of air, water vapour and particles left over from the combustion of jet fuel. When this warm exhaust meets the surrounding cooler air, it supplies all three of the above requirements. The warmer air expands and cools, in most cases very quickly reaching the dew point, and the particles in the exhaust act as cloud condensation nuclei for the water vapour to collect on and form cloud droplets. With the temperatures usually encountered at these altitudes, the cloud droplets tend to freeze into ice crystals, and this leaves long lines of bright white cloud behind the plane, possibly where no clouds were before the passage of the aircraft.

In some cases, the specific engine design used in an aircraft may limit or prevent contrail formation, however tiny low-pressure vortices left behind by the passage of the plane's wings through the air can alter the atmospheric conditions just enough to allow contrails to form anyway.

Sometimes the contrails only last for a short time, as the air the jet is flying through is too dry to sustain them. They simply sublimate - with the tiny ice crystals of the cloud converting directly back into water vapour - and the contrail vanishes.

Other times, the air around the plane contains enough water vapour on its own that it won't quickly absorb any more water introduced, and thus the trails can persist for longer. In some cases, when conditions are just right, the the ice crystals in the contrails can, themselves, act as cloud condensation nuclei, providing more surface area for more water vapour to condense out of the air, and ultimately causing clouds to spread out from their location and persist.

In all cases, the physics behind the formation of contrails is the same as with any other kind of cloud.

Contrail formation is most certainly more common now than it was in the past. This is partly due to increases in air traffic, as more jets in the sky means more instances where contrails can form. Climate change likely plays a role as well, since warmer air is capable of holding more water vapour. Thus, rising global temperatures has increased the amount of water vapour contained in the atmosphere, making it easier for contrails to form and persist.

It is important to note, as the scientists write in the study, and as Steven Davis repeats in the video above: "It is reasonable that ordinary citizens should want questions answered concerning health, climate change, and pollution."

If we didn't raise these kinds of questions in the past, we would not have agencies and experts to monitor the quality of our air, water and environment, and we would likely be living in a far more polluted world, with far more of us dealing with serious health problems. At the same time, however, the evidence presented to support the chemtrail conspiracy theory does not pass the same level of scientific scrutiny that resulted in the environmental and health revelations of the past.

"While we understand that many of the fears underlying SLAP theories may be legitimate," the researchers concluded, "the evidence as evaluated here does not point to a secret atmospheric spraying program."