Expired News - Earth just suffered through its 4th hottest year on record - The Weather Network
We use cookies on this site to improve your experience as explained in our Cookie Policy. You can reject cookies by changing your browser settings.   READ MORE I ACCEPT

Earth just suffered through its 4th hottest year on record

Thursday, February 7, 2019, 7:16 PM - The records have all been tallied and all the major player are in agreement: Earth just went through its fourth hottest year on record, and it's only going to get hotter in the years to come.

The announcements are coming a little later than usual for some, due to the U.S. Government shutdown, but we have now heard from all the major organizations around the world that track climate data and report on the global impacts of fossil fuel burning.

NASA, NOAA, JMA, Berkeley Earth and the UK Met Office all agree: 2018 was the fourth hottest year in the record books.

The lines plotted on this graph show yearly temperature anomalies from 1880 to 2018, compared to the 1951-1980 global average, as recorded by NASA, NOAA, the Japan Meteorological Agency (JMA), the Berkeley Earth group, and the UK Met Office. Credit: NASA Earth Observatory/Joshua Stevens

Temperature records between agencies and organizations vary slightly, due to how much data each collects, what monitoring stations they collect from, and what algorithms they use to accurately correct for factors such as urban heat. Thus, the lines in the above graph do not exactly match up, but the peaks and valleys in the data closely match and the overall consensus in the trend of global temperatures is very clear. 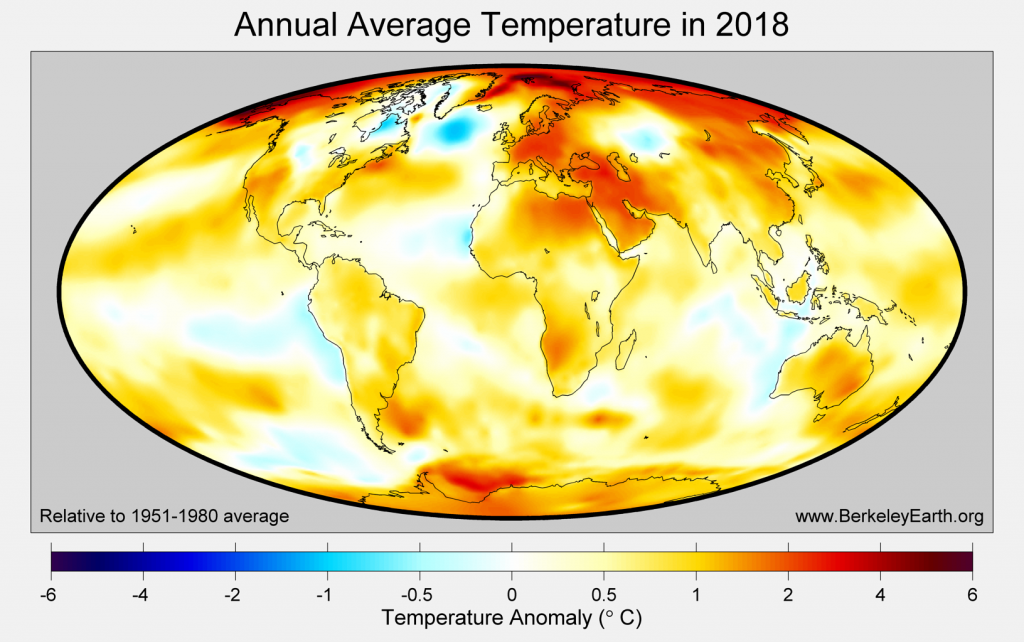 Global average temperature anomaly map, showing that there are far more warm-than-normal than colder-than-normal regions on the planet. A few notable exceptions are the cool region off the west coast of South America due to a weak La Niña, and the intense cold pool of water in the north Atlantic Ocean, which is attributed to the melting of the Greenland ice sheet. Credit: Berkeley Earth group

According to NOAA, the JMA and the UK Met Office, the last five years, 2014-2018, are now considered to be the hottest five years in the record books. Due to slight variations in their data, NASA and Berkeley Earth both have 2010 in 5th place, with 2014 following up in 6th.

What's in store for us in the next five years?

We're only in the second month of the year, however, by careful consideration and comparison with weather patterns from previous years, climate scientists can make a reasonably good prediction about how 2019 is going to turn out, at least with regards to global average temperatures.

The team at Berkeley Earth has put out their forecast for 2019. 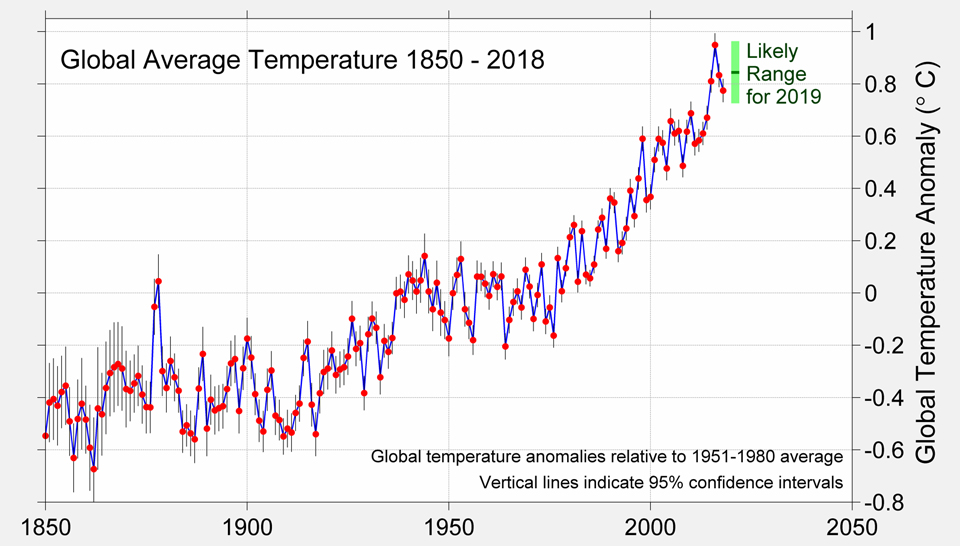 Where will 2019 fall in the climate record? Credit: Berkeley Earth

The UK Met Office is going a step further, to look at the next five years, and they're confident that we're right in the middle of the hottest decade ever on record.

"2015 was the first year that global annual average surface temperatures reached 1.0°C above pre-industrial levels and the following three years have all remained close to this level," Professor Adam Scaife, the UK Met Office's Head of Long-Range Prediction, said in a press release. "The global average temperature between now and 2023 is predicted to remain high, potentially making the decade from 2014 the warmest in more than 150 years of records."

Dr Doug Smith, a Met Office Research Fellow added, "A run of temperatures of 1.0°C or above would increase the risk of a temporary excursion above the threshold of 1.5°C above pre-industrial levels. Predictions now suggest around a 10 per cent chance of at least one year between 2019 and 2023 temporarily exceeding 1.5°C."

A 10 per cent chance isn't very high, but according to the latest predictions, based on global carbon dioxide emissions (which have begun to rise again), we have less than 16 years before seeing global temperatures peak at over 1.5°C has about as good chances as a coin-flip.

Given that we desperately want to avoid rising above that global average temperature to avoid climate catastrophe for millions - if not billions - of people, now is the time to take climate action seriously, and begin the rapid transition of the global economy over to a low-carbon one, that relies on green, renewable energy.

WATCH BELOW: THE NEW NORMAL, BC WILDFIRE ONLY FUELLING CLIMATE CHANGE THANKS TO CARBON EMISSIONS