Expired News - Here are all of Canada's World Heritage Sites - The Weather Network
We use cookies on this site to improve your experience as explained in our Cookie Policy. You can reject cookies by changing your browser settings.   READ MORE I ACCEPT

Here are all of Canada's World Heritage Sites

The United Nations Educational, Scientific and Cultural Organization (UNESCO) made the determination on Sunday. The site, a treasure trove of fossils of some of the earliest life forms on Earth, is Canada's 18th entry in the global list.

Divided into cultural and natural sites, these stunning Canadian locations have all been recognized as adding something to humanity's common patrimony.

Here's a look at them all.

Tucked away in a corner of the Northwest Territories by the border with Yukon, Nahanni National Park was one of the first sites to be inscribed into the list.

It is the very picture of rugged North American wilderness, with raging rivers, stunning canyons and craggy mountains that are part of a unique geology worthy of inscription.

"Within the park are examples of almost every distinct category of river or stream that is known along with one of North America’s huge waterfalls, Virginia Falls," UNESCO says. "The Flat and South Nahanni rivers are older than the mountains they dissect and have produced the finest examples of river canyons in the world, north of 60º. The injection of igneous rock through tectonic activity has resulted in spectacular granitic peaks." 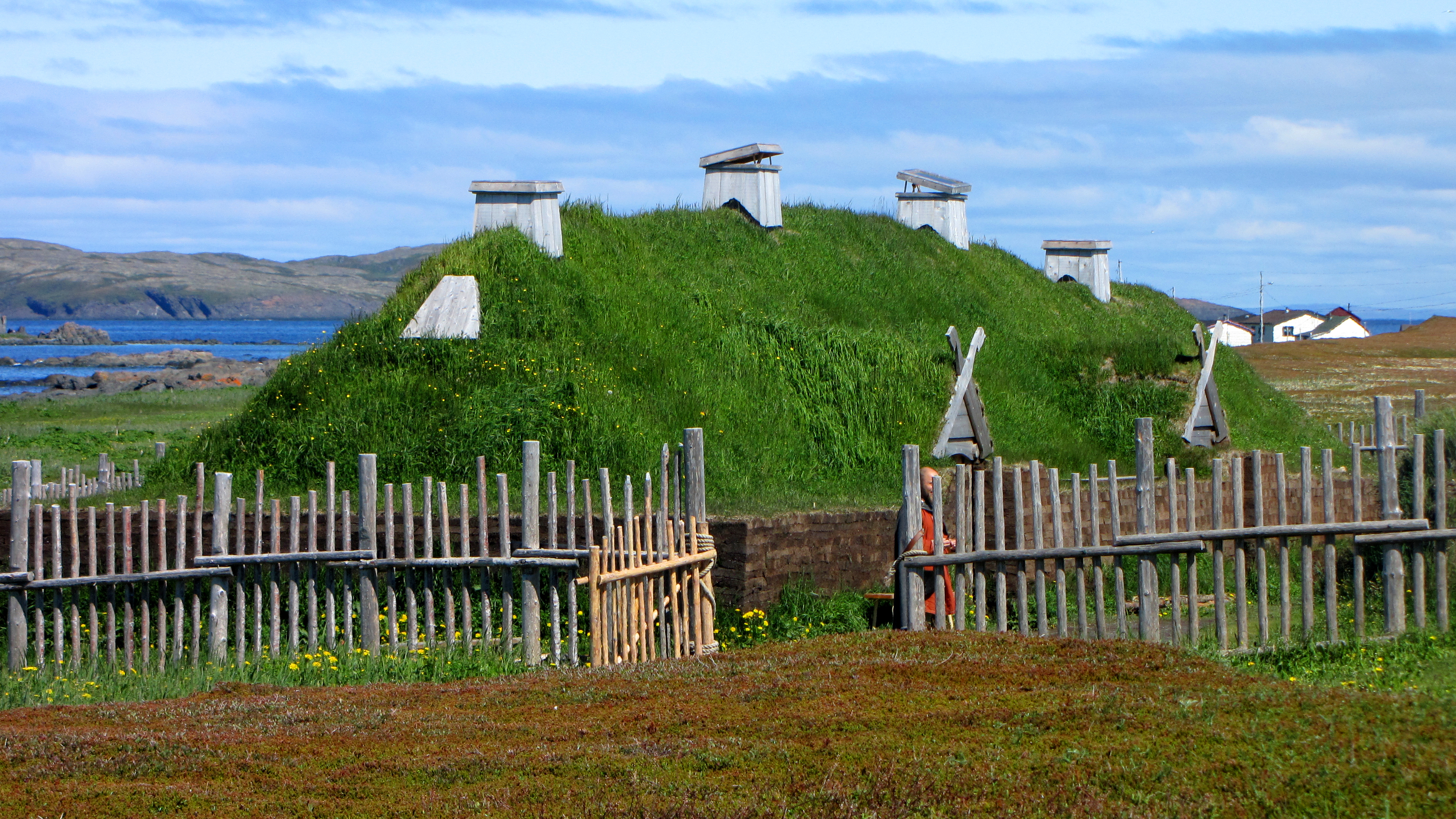 Located on Newfoundland's Great Northern Peninsula, this site, founded and temporarily settled by Norse explorers, was little more than an outpost in its heyday, but it has come to mean far more than that.

Columbus is the name many think of when they point to the Europeans' first encounter with North America, but it was at L’Anse aux Meadows, some 500 years prior, where that meeting took place.

Though not staying long, the Norsemen's presence, and their interaction with the indigenous people who called Newfoundland home, was the first true recorded contact between the old and new worlds, earning a spot on UNESCO's list.

Alberta Badlands near the entrance to the park. Image: Scorpion0422/Wikimedia Commons

The name says it all, and nowhere else in Canada is worthier of being so closely identified with the great reptiles that once ruled this Earth.

Some of the most important fossil finds from prehistoric times were made at this site in Alberta's badlands, including dozens of distinct species.

"Over 350 articulated specimens from the Oldman and Dinosaur Park formations including more than 150 complete skeletons now reside in more than 30 major museums," UNESCO says. "In addition to the significant number of high quality specimens, the property contains a complete assemblage of non-dinosaurian fossil material offering an unparalleled opportunity for the study of the Late Cretaceous paleo-ecosystem."

Straddling the border between a province, a territory, and a state, this complex of parks is another collection of stunning landscapes, unique in the Americas.

Aside from being rich in wildlife such as grizzly bears, caribou and Dall's sheep, it's also home the world's largest icefield outside of the polar regions.

"The parks demonstrate some of the best examples of glaciation and modification of landscape by glacial action in a region still tectonically active, spectacularly beautiful, and where natural processes prevail," UNESCO says. 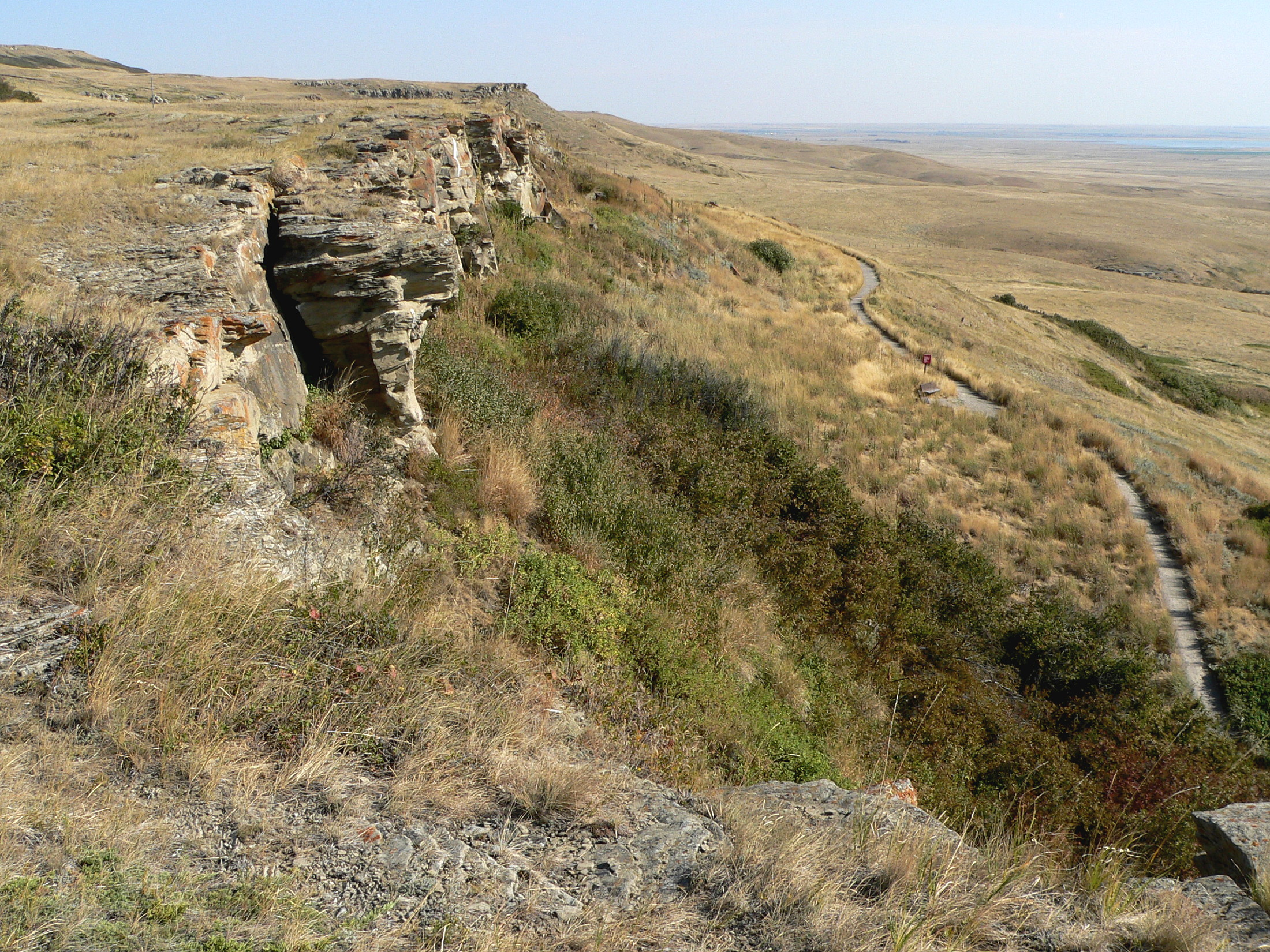 The view north along the top of the cliffs at Head-Smashed-In Buffalo Jump. Image: Ken Thomas/Wikimedia Commons

Alberta again, though this time, rather than prehistoric creatures, the name of this site is a glimpse at the mastery over their environment displayed by the indigenous peoples of the area.

The name is a reference to the fate of the bison herds that would be channeled to the cliff by the local peoples knowledgeable of the area, essentially sending the animals stampeding to their deaths. Below the cliffs, the carcasses would be carved up and prepared for food.

"This landscape is an outstanding illustration of subsistence hunting techniques that continued into the late 19th century and which still form part of the 'traditional knowledge base' of the Plains nations," UNESCO says. "It throws valuable light on the way of life and practices of traditional hunting cultures elsewhere in the world." 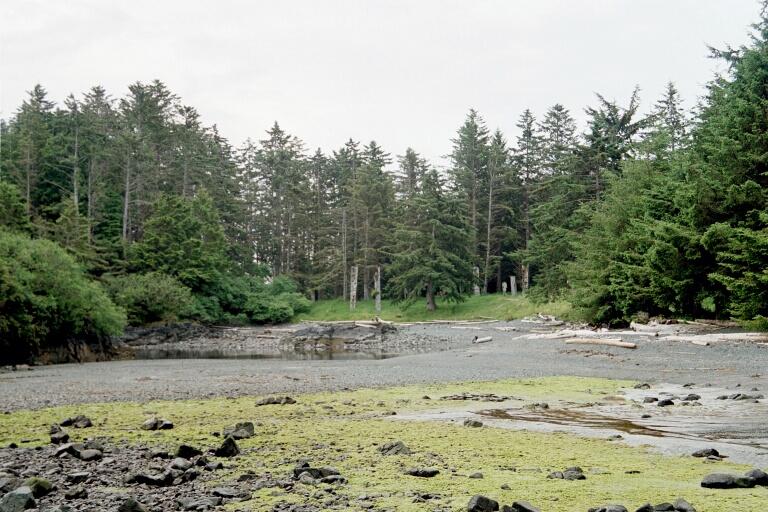 This site, located on British Columbia's Haida Gwaii, formerly the Queen Charlotte Islands, is a former village home to the area's Haida people.

Homes at the site, together with carved mortuary and memorial poles, are a showcase of the thriving way of life of the Haida.

"The site commemorates the living culture of the Haida people and their relationship to the land and sea, and offers a visual key to their oral traditions," UNESCO says.

This site is tucked away in Alberta's northeastern corner, spilling over into the Northwest Territories.

The remote park is home the continent's largest herd of wood bison, and is the resting place of the whooping crane. It also boasts what UNESCO says is the largest inland river delta in the world, at the mouth of the Athabasca and Peace Rivers.

"Wood Buffalo National Park is an outstanding example of ongoing ecological and biological processes encompassing some of the largest undisturbed grass and sedge meadows left in North America," UNESCO says.

This gem of a city was once the capital of a French colonial empire stretching from the mouth of the St. Lawrence deep into the North American continent. Even after its takeover by the British Empire, it remained the keystone of the region for many years.

As the only walled city north of Mexico, its old colonial character is richly preserved, and many a tourist from across the world have come to the city to walk its old streets and breathe in the ages.

"Together with the Lower Town and its ancient districts, it forms an urban ensemble which is one of the best examples of a fortified colonial city," UNESCO says.

We can see why UNESCO struggled to pick just one, and unlike other remote natural sites on the list, many of these parks are well-visited by people from near and far.

"Classic illustrations of glacial geological processes — including icefields, remnant valley glaciers, canyons and exceptional examples of erosion and deposition — are found throughout the area," UNESCO says. "The Burgess Shale Cambrian and nearby Precambrian sites contain important information about the earth’s evolution."

Another treasure from Newfoundland, Gros Morne National Park is on many a bucket list.

Not far, in fact, from L'anse-aux-Meadows, UNESCO says Gros Morne is "a rare example of the process of continental drift, where deep ocean crust and the rocks of the earth's mantle lie exposed," making for some stunning landforms.

"The fjords, waterfalls and geological structures of the park combine to produce a landscape of high scenic value," UNESCO says.

Though much smaller and not as old as Quebec City, this colourful picturesque town has its own stories to tell.

A gem on Nova Scotia's South Shore, whose once-thriving shipyards built the legendary Bluenose, UNESCO says Lunenburg warrants a spot on the list for being the oldest surviving example of a classic British North American planned town, with few real layout changes since its foundation in 1753.

"The inhabitants have safeguarded the town’s identity throughout the centuries by preserving the wooden architecture of the houses and public buildings, some of which date from the 18th century and constitute an excellent example of a sustained vernacular architectural tradition," UNESCO says. 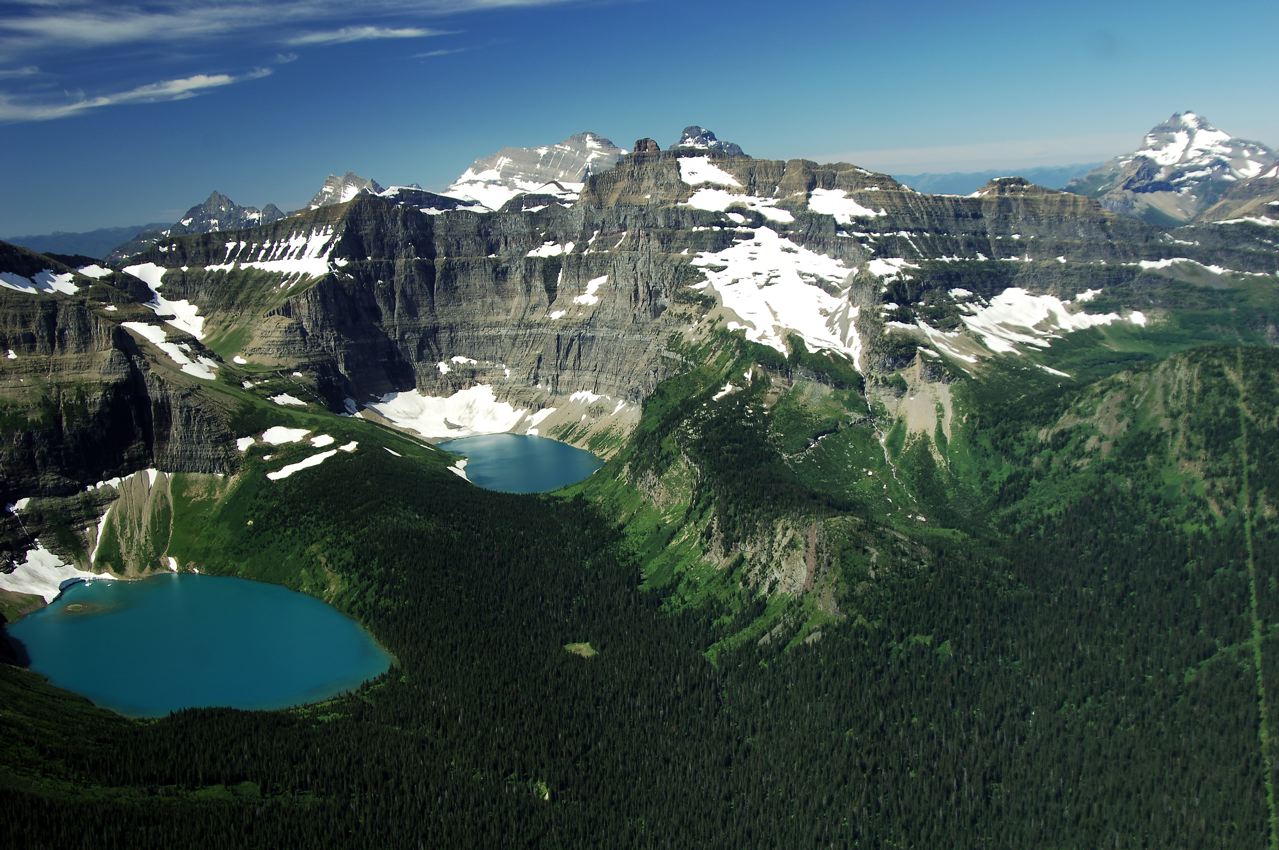 Another site that straddles the U.S.-Canada border, this park was formed when Alberta's Waterton Lakes National Park was merged with the Glacier National Park in Montana to form what UNESCO says is the world's first international peace park in 1932.

Aside from the cultural significance to the two countries, the landscape itself is beautiful, with a distinct climate and a merger of both prairie and mountain landforms.

"Both national parks were originally designated by their respective nations because of their superlative mountain scenery, their high topographic relief, glacial landforms and abundant diversity of wildlife and wildflowers," UNESCO says.

Quebec's Gaspé Peninsula holds some of the most significant fossil finds known the man -- older, even, than those at Dinosaur National Park.

While the rock beds of Alberta's badlands are rich in dinosaurs, the fossil record at Miquasha contains traces of lifeforms dating back some 370 million years to the Devonian Period, an age where the first true fish began to emerge in the depths of the prehistoric ocean.

"The fish, invertebrate and plant fossils at Miguasha bear witness to life as it existed on Earth 370 million years ago," UNESCO says.

Another haven for fossil seekers, this time in the Maritimes.

The 14.7 km of cliffs at this site contain almost 150 different species that lived in three distinct ecosystems.

"The rocks of this site are considered to be iconic for this period of the history of Earth and are the world’s thickest and most comprehensive record of the Pennsylvanian strata (dating back 318 to 303 million years) with the most complete known fossil record of terrestrial life from that time," UNESCO says.

Ontario's only entry on the list (so far) is an engineering marvel that hearkens back to an age where canals were in vogue in eastern North America, for both travel and defence.

The Rideau Canal, at around 200 km long, was begun in the early 19th Century when renewed war between Britain and the United States still seemed like a real possibility, though it is now mostly used for boating and, in the winter, ice skating.

"The site, one of the first canals to be designed specifically for steam-powered vessels, also features an ensemble of fortifications," UNESCO says. "It is the best-preserved example of a slackwater canal in North America, demonstrating the use of this European technology on a large scale."

The Acadians -- the original French settlers of Nova Scotia -- have left many monuments behind them, both before and after their expulsion from the region. But at Grand Pré, in Nova Scotia's Minas Basin, it is the land itself that is a testament to their works and way of life.

The marshland is a product of the dikes and aboiteau system of wooden sluices the Acadians used in the 17th Century to claim the land for agriculture.

"The landscape is an exceptional example of the adaptation of the first European settlers to the conditions of the North American Atlantic coast," UNESCO says.

Like the Norse, the people who set foot at Red Bay, Newfoundland, would stay only briefly on Canadian shores.

The site, whose heyday was in the early 16th Century, was used by Basque sailors from Spain as a whaling station. Archaeological digs at the site show that it was a full-fledged operation, which harvested whales for oil for some 70 years before depleted stocks forced its abandonment.

"It is the earliest, most comprehensive and best preserved archaeological testimony of a pre-industrial whaling station," UNESCO says.

The latest entry of the list, on the southern tip of Newfoundland's Avalon Peninsula, tells a story older than any of the fossils at other sites on this list.

The lifeforms preserved in the rocks at this site are old, dating back to the Ediacaran Period, 580-530 million years ago, when life on prehistoric Earth was moving beyond simple microbes.

"These fossils illustrate a watershed in the history of life on earth: the appearance of large, biologically complex organisms, after almost three billion years of micro-dominated evolution," UNESCO says.