Expired News - Game over? Will global warming be even worse than we think? - The Weather Network
We use cookies on this site to improve your experience as explained in our Cookie Policy. You can reject cookies by changing your browser settings.   READ MORE I ACCEPT

Game over? Will global warming be even worse than we think?

Friday, November 18, 2016, 7:29 PM - The Arctic is running a severe fever, global sea ice is at record low levels, and could climate change get even worse than we thought as global temperatures rise? It's What's Up in Climate Change!

It's been quite warm at the opposite ends of the planet as of late.

Both the Arctic and the Antarctic have been experiencing elevated temperatures, and in the Arctic, it is like an extreme heatwave, with temperatures roughly 20oC warmer than normal for this time of year.

This heat is having a strong impact on ice growth in the Arctic and is causing a stronger than usual melt of Antarctic sea ice.

In the Antarctic (shown right, above), 2016 sea ice extent has been roughly average, thus well below the levels that have been seen over the past several years, until early September, just as it was reaching what should have been its peak during the southern winter. At this point, sea ice extent plummeted, to well below average and has remained so since, and has been at record low extent since the first week of November.

Things may be worse than we first thought...

New research is revealing that Earth's climate sensitivity may actually get worse as global temperatures continue to rise.

The hope has been that climate sensitivity is low - perhaps just a degree or two Celsius, at the most. Reality, however, has been a bit more harsh, pointing more towards a climate sensitivity of between 2oC and 7oC, with a rise of around 3oC being the most likely outcome.

It should be noted that even a 3oC rise in global temperatures is expected to result in disastrous weather impacts, which is why global policymakers have first focused on keeping warming to under 2oC, and more recently - with the Paris Agreement - began to look at keeping warming to less than 1.5oC.

This new study, however, led by Tobias Friedrich from the University of Hawaii and published last week in the open access, peer-reviewed journal Science Advances, is showing that our situation may be far, far worse.

To this, they added CO2 concentration data from air bubbles trapped in the cores, and all other factors known to influence climate (Earth's tilt, precession and orbital eccentricity), to come up with a complete picture for temperature versus carbon dioxide in the past. 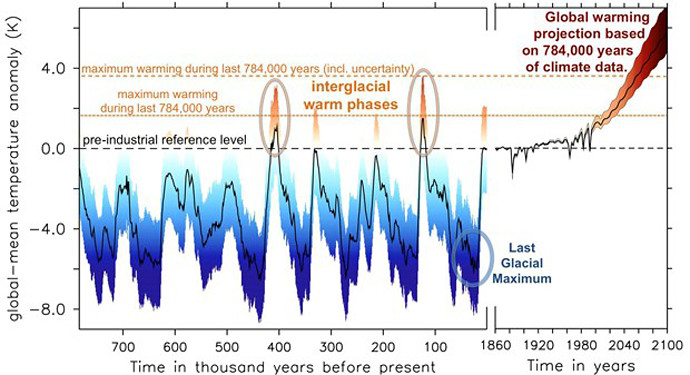 Earth's global mean temperature reconstructed for the past 784,000 years, with a projection extended out to 2100 based on increasing climate sensitivity to greenhouse gases due to rising temperatures. Credit: Friedrich, et al. (2016)

Based on this, Friedrich and his team calculated that, as Earth's atmosphere continues to warm, the climate will become more sensitive to additional CO2, and with a "business as usual" approach to greenhouse gas emissions, this will result in an overall rise in temperatures of around 5.9oC by the end of this century! 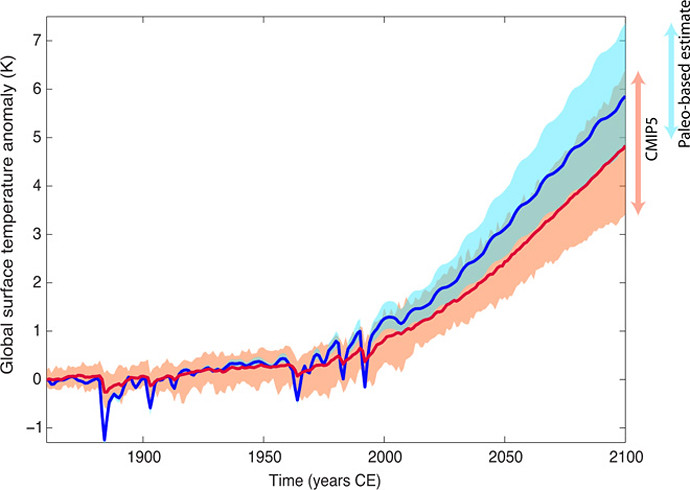 Given the current possibility, that the upcoming Trump administration may cancel all U.S. involvement in climate change action, and instead push the very "business as usual" plan that could lead to disaster, this is very disheartening news.

Dr. Michael E. Mann, director of the Earth System Science Center at Penn State University, told the UK news site The Independent in an email that this new study "does indeed provide support for the notion that a Donald Trump presidency could be game over for the climate."

"By 'game over for the climate'," Mann explained, "I mean game over for stabilizing warming below dangerous (ie greater than 2oC) levels."

"If Trump makes good on his promises," he added, "and the US pulls out of the Paris [climate] treaty, it is difficult to see a path forward to keeping warming below those levels."

The only way out

"Our results imply that the Earth’s sensitivity to variations in atmospheric CO2 increases as the climate warms," Friedrich said in a University of Hawaii press release. "Currently, our planet is in a warm phase - an interglacial period - and the associated increased climate sensitivity needs to be taken into account for future projections of warming induced by human activities."

"The only way out is to reduce greenhouse gas emissions as soon as possible," Friedrich said.