Expired News - A 'perfect' forecast? Machine learning may be the answer - The Weather Network
We use cookies on this site to improve your experience as explained in our Cookie Policy. You can reject cookies by changing your browser settings.   READ MORE I ACCEPT

A 'perfect' forecast? Machine learning may be the answer

Wednesday, June 6, 2018, 9:46 AM - We've all experienced this: it rains even when the forecast says it won't. Now before you rant about your local meteorologist, keep in mind weather forecasting is an extremely complex science, made challenging by the chaotic nature of our atmosphere and the imperfect, but critical, steps of initialization. Trying to piece together the future has a definite limit, but what if we could extend that horizon with 'amazing' accuracy?

A team of researchers from the University of Maryland have used machine learning to accurately predict the future state of a chaotic system that extends far beyond the scope of what has been historically possible. The series of results were reported in Physical Review Letters and Chaos, where the team, led by chaos theory pioneer Edward Ott, employed advances in the machine learning area - the same application recently used to successfully advance artificial intelligence. The method is called 'reservoir computing' and experts are calling the technique 'groundbreaking', with high hopes for widespread application.

WHAT IS RESERVOIR COMPUTING

When applied, the 'reservoir computing' technique essentially 'learns' the dynamics of a chaotic system. For their research, the team studied the Kuramoto-Sivashinsky (K-S) equation, which closely mimics a flame front that is chaotic in nature. The evolving solutions to the K-S equation act like the propagating flame through a combustible material, leading to a future prediction of how the flame front will behave. Once completed, the reservoir computer analyzes and trains itself on the past evolution of the K-S equation, then predicts how the flame front advances through time. This technique proved itself to be extremely powerful, as their predictability horizon roughly extended out eight times further than previous prediction methods.

By using the K-S equation for their research, the team has been able to study turbulence and spatiotemporal chaos, says Jaideep Pathak, a graduate student of Ott and the lead author of the papers.

HOW DOES THIS RELATE TO WEATHER PREDICTION

The key to the team's study was the analysis of a chaotic system and in weather prediction, you are absolutely playing by the same rules: our atmosphere is a large chaotic system with excessive amounts of interrelated variables. In the present day, weather forecasting involves mapping out the current state of our atmosphere, then using complex mathematical equations to predict its future appearance. Even the most experienced dynamicists can become crippled by the overwhelming level of equations required to represent a chaotic system, some of which are unknown.

But that's the beauty of reservoir computing: it completely eliminates reliance on the equations by deeply studying the data recorded about the evolving solution to the equations.

“This paper suggests that one day we might be able perhaps to predict weather by machine-learning algorithms and not by sophisticated models of the atmosphere,” Holger Kantz, a chaos theorist at the Max Planck Institute for Physics of Complex Systems, told Quanta Magazine.

Our current weather prediction Achilles heel is not computing power or insufficient dynamic knowledge but rather a lack of atmospheric observation networks. The old saying "you need to know where you came from to know where you're going" perfectly applies in this scenario -- if we don't know exactly the atmosphere's initial state, then it's difficult to accurately predict it into the future. By using data from satellites radiosondes, radar, airplanes and buoys, we reconstruct the starting point to our best ability, but inherent uncertainty grows like a weed through time, as imaged below. 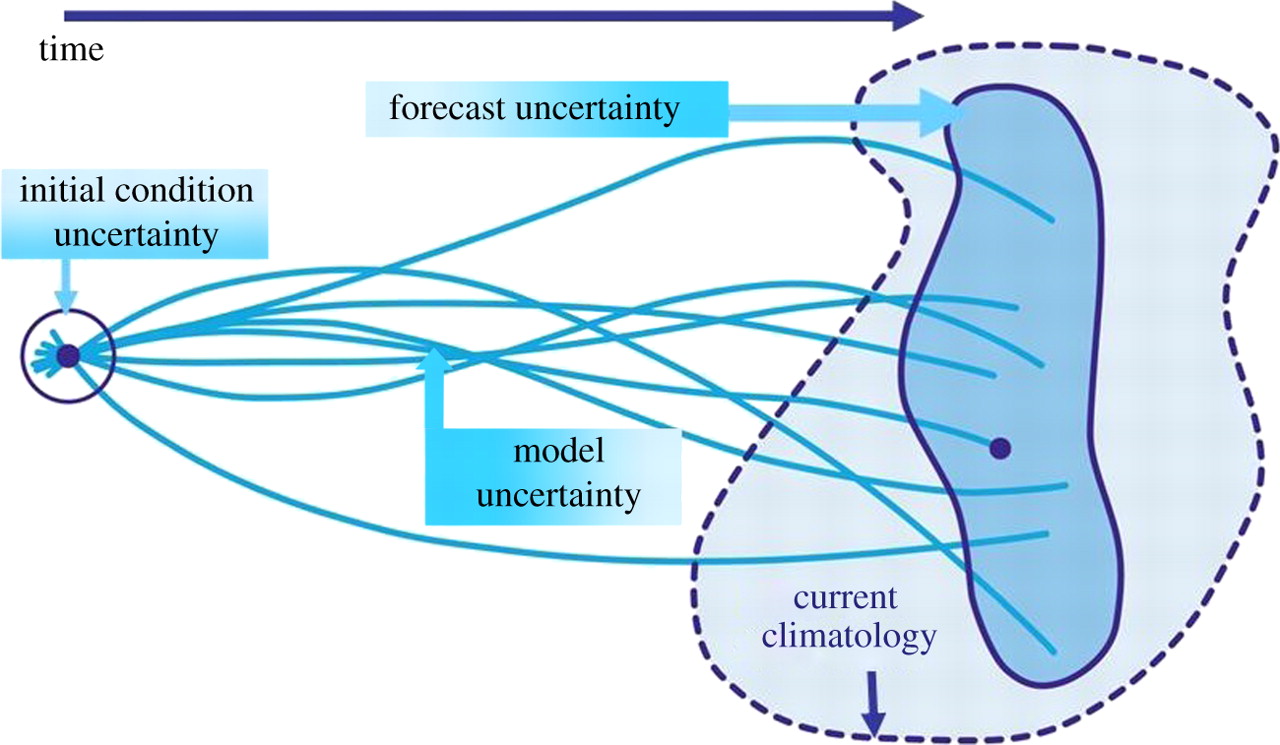 Propagating error in a forecast begins with insufficient knowledge of the atmosphere's initial conditions. Image courtesy: The Royal Society.

According to the study, you would need to measure the system's initial conditions 100,000,000 (100 million) times more accurately to predict its future state to the accuracy done with machine-learning -- about eight times further ahead in time.

Since their work was published, the team and other collaborators have been focused on implementing the technique to practical applications. According to Edward Ott, the future of machine-learning can be used to "fill the gaps where ignorance resides" while continuing to "use the good knowledge that we have where we have it".

So instead of completely removing our solid foundation of weather prediction, the reservoir computing technique could essentially calibrate the weather models and transform our model-based predictions into a hybrid, potent solution.

Aside from forecasting our temperamental atmosphere, the machine-learning technique could be applied to other natural phenomena such as the prediction of rogue waves, dangerous solar storms and possibly even earthquakes. Even in the medical world, the algorithm could potentially monitor cardiac arrythmias, giving a heads up to future heart attack victims.

WATCH BELOW: TORNADO TIMELAPSE YOU DO NOT WANT TO MISS

With files from Quanta Magazine.