Hurricane Dorian is forecast to make landfall in Atlantic Canada this weekend, raising the potential for flooding, damaging winds, and widespread power outages.

The storm is expected to hit east or central Nova Scotia Saturday evening, with impacts reverberating across all four Atlantic provinces.

In a statement released Friday, the Halifax Regional Municipality was recommending residents living close to the ocean evacuate ahead of the storm.

“The latest forecasts predict high winds, considerable rainfall, and significant storm surges. Waves are expected to reach heights of 15-metres (49-feet), which could create dangerous conditions for residents living near the water,” the statement read.

Areas most at risk include the Sambro region, Peggy’s Cove and along the Eastern Shore, where "citizens are encouraged to be in alternative locations prior to the arrival of the storm.”

The Canadian Red Cross is in Halifax preparing for the storm by coordinating with regional and provincial partners, according to Sarah Parisio, emergency management coordinator for the Red Cross in Halifax, Nova Scotia (watch video above for more).

A volunteer team is on standby and ready to respond as well.

Parisio says individuals can and should make preparations.

"Something people can do is have an emergency kit ready, and in that kit is enough things to last 72 hours," Parisio says.

An emergency preparedness kit should include water (0.5-1 gallon/2-4 litres per person), canned goods, can opener, a first aid kit, batteries, flashlight, medication, personal documentation, a battery-operated radio, blankets, and toilet paper. It's also a good idea to have spare house and car keys. Put aside some cash in small bills and coins, which would be especially useful if ATMs or debit card machines stop working.

Leave your emergency kit by the door in case you need to “grab it and go.”

With high winds and rain, homeowners are urged to trim loose branches before the storm hits, if it's safe to do so. Make sure no debris could be blown away through the high winds.

"You may also want to consider tying down outdoor furniture or securing loose bins," Parisio says.

It is also advised that you clear your drains and make sure your windows are closed. 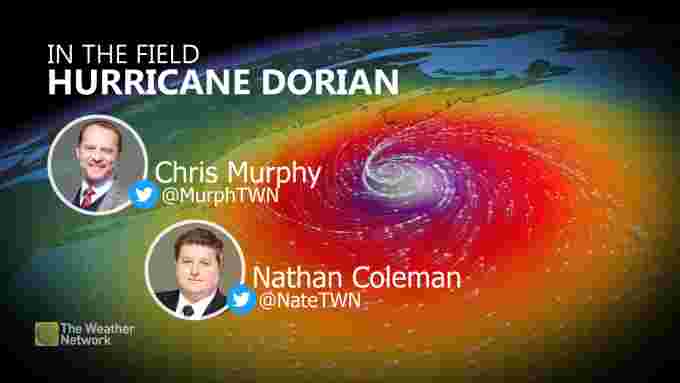 The Weather Network’s Chris Murphy and Nathan Coleman will be in Nova Scotia this weekend to capture the impacts of Hurricane Dorian as it approaches and makes landfall. Follow them on Twitter as they post live updates.

Every family is unique and has different needs. A family with young children needs to think of ways to keep its smallest members occupied if the lights go out. A board game could do the trick. Stock up on any medication you might need, whether it is over-the-counter or prescription, and get an extra pair of eyeglasses, if possible.

Just as you need to have food and water for yourself, you also need to provide those essentials for your pets. Be sure to keep them inside during stormy weather.

"Having a plan is important, as well as having an emergency contact outside of the city," Parisio says.

VIDEO: WHY DORIAN COULD BE WORST HURRICANE TO HIT ATLANTIC CANADA SINCE JUAN