Tuesday, July 21st 2020, 3:00 pm - Strap in and hold on. Meteorologist and Storm Hunter host, Mark Robinson, takes us through his wild storm chase on Sunday, July 19.

Underneath the dark grey clouds, the rain shield turned an ominous blue-green. It was the kind of colour that immediately gets your attention because it looks like a tropical ocean has suddenly been given wings and been launched into the sky. My rational brain told me that it was a normal thing given the potential for lots of hail in the storms, but the irrational side made all of the hairs on the back of my neck stand up.

And given the speed of the onrushing QLCS, there was nothing I could do but find what shelter I could and hope that there wasn’t a tornado buried in the murk.

And, that’s when the tornado warning set my phone off…

So, what exactly is a QLCS? It’s an acronym that stands for Quasi Linear Convective System. Basically, it’s a very long line of storms that act as one single system acting to plow their way from west to east, using the hot, damp airmass ahead of the line as fuel. 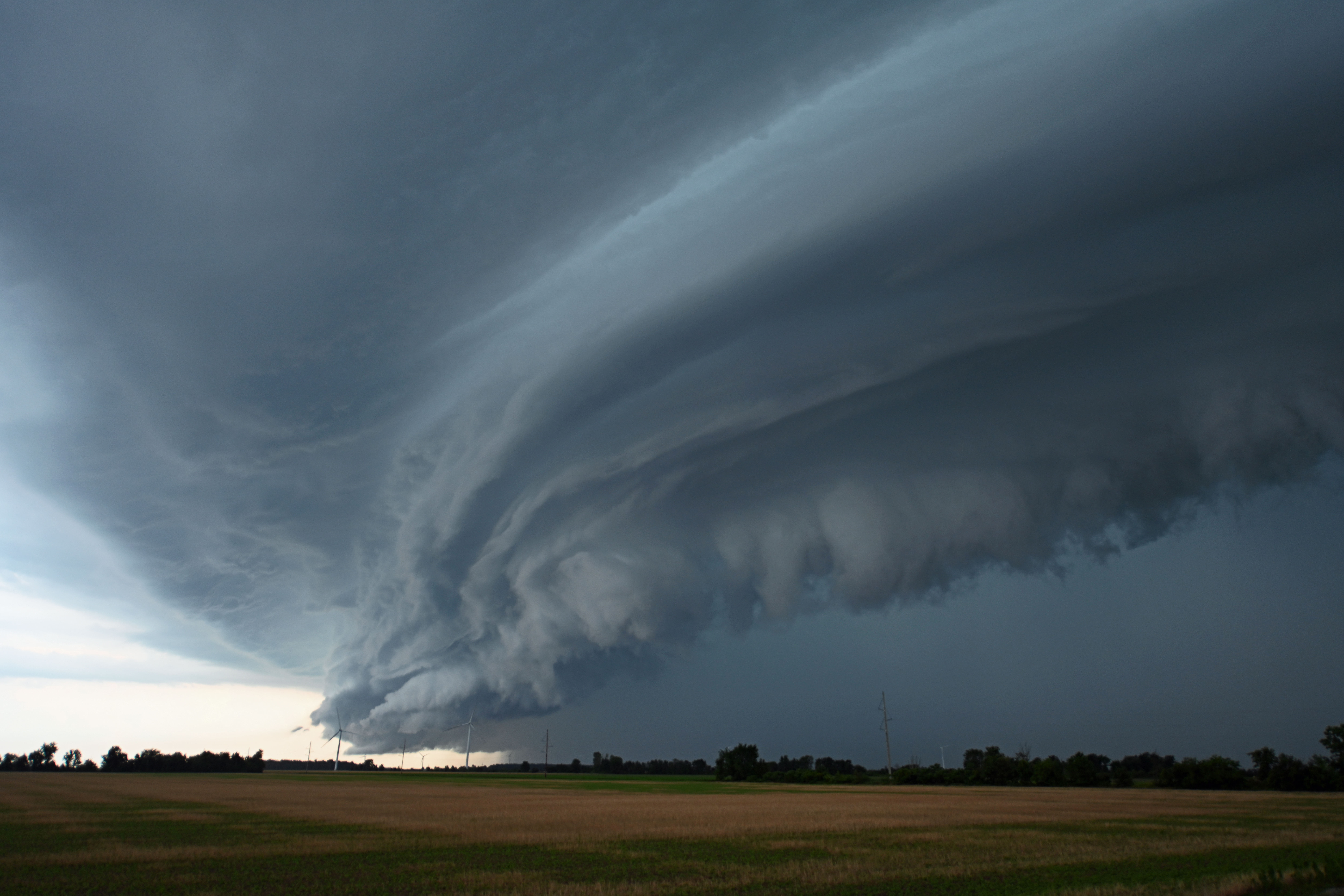 As the line of storms races eastwards, parts of the line begin to bulge out ahead of the rest of the storms. On radar, the bow shape becomes very evident as the bulge increases and eventually becomes a “bow echo”, the head of which can have destructive winds with it. These bow echoes are very evident on radar and can be even more evident if your standing in front of one.

As I stood near Milverton watching the line race towards me, I knew that I was sitting close to the front edge of a bow and that I’d need to get out of there quick if I wanted to stay ahead of it. The line looked to be moving far quicker than I’d anticipated, but if things went as they normally did, all I had to do was drive east of it.

That's when I noticed that the rain to my south was racing ahead of the already onrushing storm and a quick glance at the radar told me that I was now standing right in front of a notch, an area where the line of storms has developed a bit of a spin. Only, with this one, that spin was likely producing a tornado. One problem; I couldn’t see it. At all.

That was the point at which my phone went off with the tornado warning. And then another and another and another. This line of storms was suddenly producing far more spin-ups and potential tornadoes than I’d ever seen on a QLCS. What was going on? As the rain began to spatter down in huge droplets, I ran for the car. The winds were already rocking the vehicle and I knew I had to find some shelter before the worst part of the line hit. I raced the car north away from the trees that could easily be chewed apart in the winds and pulled into an open parking lot near a grain loading facility. I knew that if there was a tornado in there, any debris would likely land in the lot instead of on me. QLCS tornadoes don't have the energy of an isolated supercell tornado, so it would unlikely be able to flip the car. Flying debris was the big danger.

I turned the car into the wind and the line swept over me. For a moment, everything went almost completely white as the wind-driven rain exploded over the building and the The Weather Network car. I felt like I had suddenly been transported back into a hurricane chase.

As the line passed and the wind and rain eased, reports of damage began to flood social media and I knew that this had been a far more significant event that we’d first anticipated.

Just south of Exeter in what looks to be a tornado damage path. @westernuNTP @weathernetwork #ONStorm pic.twitter.com/qJb6rDr5is

As I set out to document the damage that the storms had inflicted on Ontarians, I turned to my good friend and one of Canada’s foremost tornado experts, Dr. Dave Sills to find out why this became such a destructive event.

“QLCS tornadoes aren’t unusual,” he told me. “But this line was odd. It wasn’t producing a lot of spin ups as it crossed through the States, but when it hit Ontario, something unusual happened. Ahead of the main line of storms, a series of small showers appeared, likely due to some sort of interaction from the Lakes or the line itself. As the line of storms overran the showers, those spots seemed to correspond with the place where we saw a vortex on the line.”

Dave went on to explain that this is just a preliminary and quick look at what happened and it may not turn out to be the case once all the data is analyzed, but at least one shower over Lake Huron became strong evidence.

Jun 10 / Jul 19 storms in SOnt have got me thinking back to BAMEX results on QLCS mesovortices. It was found that there were both tornadic and non-tornadic mesovortices, with the latter having straight-line wind damage along lengthy paths too wide for a tornado. Conceptual model: pic.twitter.com/DzoXceVIqI

Dave explains, “Best example right now is the one tornado that can be confirmed - the waterspout over Lake Huron with the spray ring. If you look at that location around 10:30, you’ll see a shower get overrun by the line and then a couplet (a radar indication of rotation in a storm) develops.”

This finding may lead to a greater understanding of where and how QLCS tornadoes develop making warning times that much more accurate. Given that I tend to find myself in front of these storms on a fairly regular basis, more knowledge is going to benefit me. But, more importantly, it will increase the safety of those caught by these storms.

As of this writing, four tornadoes have been confirmed from the line of storms that hit Ontario on Sunday, July 19.

Stay up-to-date with southern Ontario's next storm by following Mark Robinson on Twitter.