Editor's Choice
Your guide to all of falls spectacular stargazing events!
In partnership with

Ida was one of the most intense tropical storms on record in New Orleans. Its storm surge was less than Katrina’s, but it quickly flooded streets and homes outside the levee system where many residents were under mandatory evacuation orders. Most of New Orleans’ rebuilt levees appeared to have held, but the powerful winds tore up roofs, knocked down trees and caused “catastrophic damage” to transmission lines, cutting power across the region.

Four articles from our archives, written by meteorologists and atmospheric scientists, offer some insight into why the New Orleans area is at high risk for intense hurricanes and what climate change has to do with these powerful storms.

1. SOME AREAS ARE MORE PRONE TO HURRICANE DAMAGE

New Orleans is among the most at-risk places along the U.S. coast for hurricanes. An analysis by the National Oceanic and Atmospheric Administration estimated the area was likely to see a hurricane within 50 nautical miles about once every seven years and a major hurricane about every 20. 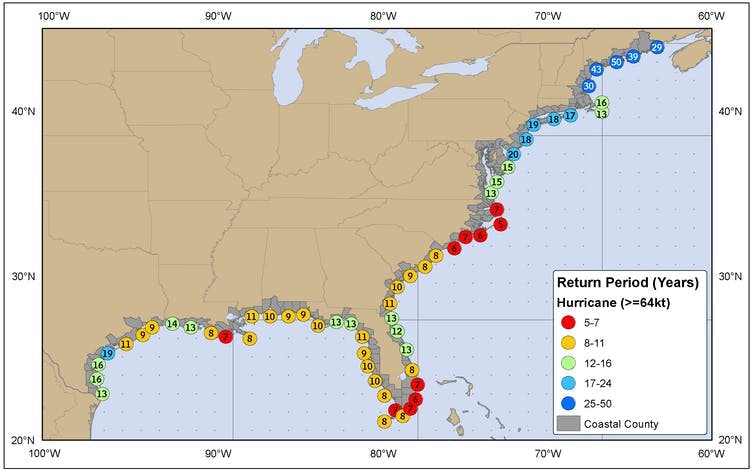 The numbers shown here reflect how often a hurricane would be expected within 50 nautical miles. The red dots suggest a hurricane every five to seven years. (NOAA)

One factor is timing, she wrote. Storms tend to hit Texas and the Atlantic Coast earlier in the season, while the northern Gulf Coast is at higher risk from late August into October. Trade winds tend to push storms away from the western Gulf later in the fall. 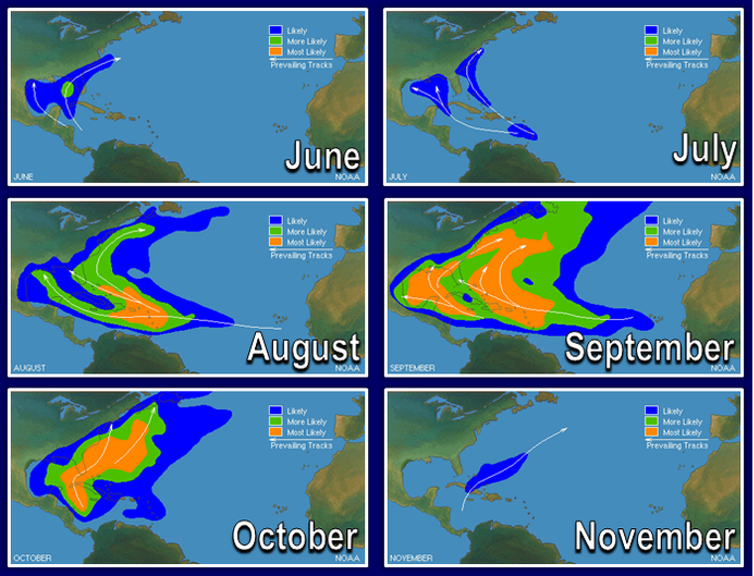 The busiest areas during each month of hurricane season. (NOAA).

Another is the shape of the sea floor. A shallow continental shelf like Louisiana’s can generate a powerful storm surge. Parts of the coast were inundated with more than 9 feet of water as Ida arrived.

“Three key ingredients are needed for a hurricane to form: warm sea surface water that’s at least about 80 degrees Fahrenheit (26.5 C), a thick layer of moisture extending from the sea surface to roughly 20,000 feet, and minimal vertical wind shear so the thunderstorm can grow vertically without interruption,” Masson wrote.

Hurricane Ida had all three. The Gulf of Mexico’s surface was exceptionally warm as Ida moved through, with temperatures around 85 to 90 F (29.4 to 32.2 C). The storm also had plenty of moisture and very little wind shear to stop it.

2. WHAT DOES CLIMATE CHANGE HAVE TO DO WITH HURRICANES?

The 2020 hurricane season broke records with 30 named storms, seven major hurricanes of Category 3 strength or higher, and 10 storms that underwent rapid intensification like Ida did before making landfall. 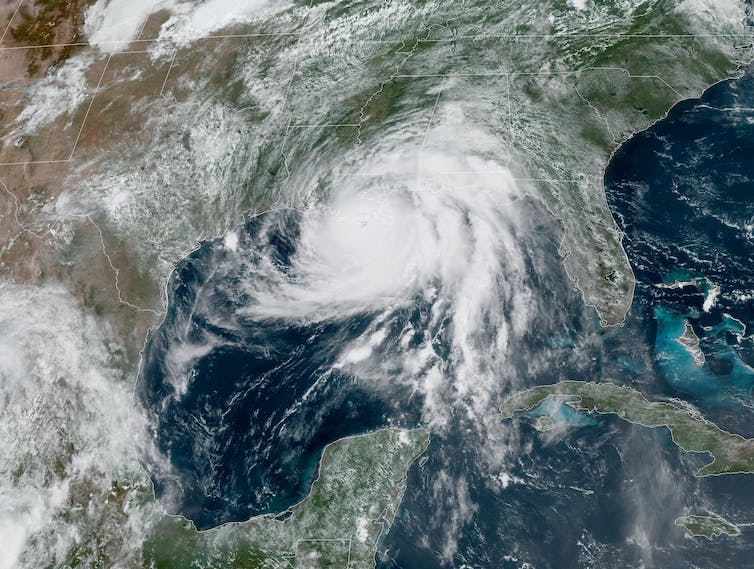 Hurricane Ida just before landfall on the Louisiana coast on Aug. 29, 2021. (NOAA)

On the question of whether climate change affects the number of hurricanes, there is no detectable global trend in hurricane frequency, and studies using computer models have had conflicting results, Ruppert and Wing wrote. But, they said, there is a trend toward more intense storms – those that are Category 3 and higher, like Hurricane Ida.

“Since ocean temperature controls the potential intensity of tropical cyclones, climate change is likely behind this trend, which is expected to continue,” they said. “The U.S. is also seeing more storms with extreme rainfall. With warmer temperatures, more water is able to evaporate into the atmosphere, resulting in greater moisture in the air.”

Climate change also affects the level of hurricane damage in another way: It gradually increases the risk from storm surge.

Storm surge – the huge volume of water that the hurricane pushes on shore – is one of the greatest threats to life and property from any hurricane. The height and extent of the storm surge depend on the strength and size of the hurricane, but sea level rise is raising the baseline height of the ocean, Penn State meteorologist Anthony Didlake Jr. explained.

“As water warms, it expands, and that has slowly raised sea level over the past century as global temperatures have risen. Freshwater from melting of ice sheets and glaciers also adds to sea level rise. Together, they elevate the background ocean height,” Didlake wrote. “When a hurricane arrives, the higher ocean means storm surge can bring water further inland, to a more dangerous and widespread effect.”

4. THE IPCC ON HURRICANES

It discussed evidence that hurricanes are now more intense than they were 40 years ago, are intensifying more rapidly and are slowing in their forward movement, leading to more rainfall. The influence of greenhouse gas emissions in these changes is still being determined; reductions in particulate pollution have also had important effects, said Robert Kopp, an author of the report’s chapter on oceans and sea level rise.

“The clearest effect of global warming is that a warmer atmosphere holds more water, leading to more extreme rainfall, like that seen during Hurricane Harvey in 2017,” Kopp explained. “Looking forward, we expect to see hurricane winds and hurricane rains continue to increase.”

Editor’s note: This story is a roundup of articles from The Conversation’s archives.