There has been a lot of intense storm activity this year. As of today, in the Atlantic, there have been:

That's a lot of activity. According to the CBC an average year typically has 12 named storms, with six hurricanes and three major hurricanes, based on data from 1981 to 2010.

And the number of storms isn't the only surprising thing we've seen this year. Here are five things that have surprised us so far -- but we may have to update this list. Storm activity in the Atlantic basin doesn't usually taper until the end of November so the season may have some more surprises up its sleeve this year.

At any rate, here's the (current) list, arranged by date.

1. MARCO AND LAURA WERE AN UNUSUAL COMBO

In late August the Caribbean and the U.S. Gulf coast were battered by Marco and Laura, a pair of tropical storms that hit the region days apart.

While it's not uncommon for storms to follow one another, the second storm is often weaker. That's because the first storm cools surface waters and reduces the heat needed to fuel the second storm. Research suggests the cooling effect could last for more than a month.

The Marco-Laura event is unusual because Laura veered onto its own course and strengthened, avoiding any of the cooler waters left behind by Marco.

VIDEO: DRAMATIC BEFORE AND AFTER IMAGES OF HURRICANE LAURA

2. PAULETTE RETURNED AS A ZOMBIE STORM

In early September, Paulette formed, becoming one of several active cyclones moving through the Atlantic Ocean at that time. That in itself is rare -- but let's dig deeper into what made Paulette stand out.

Hurricane Paulette made landfall in Bermuda as a Category 1 storm on September 14, strengthening to a Category 2 while over the island. It eventually lost speed and was downgraded to a post-tropical low-pressure system.

That's where the story gets interesting.

Because 2020, we now have Zombie Tropical Storms. Welcome back to the land of the living, Tropical Storm #Paulette pic.twitter.com/98QNEaTr4S

After five-and-a-half days, Paulette re-gained strength and became a tropical storm, reappearing about 480 kilometres off the coast of the Azores islands.

3. WE RAN THROUGH ALPHA AND SWITCHED TO GREEK

On Friday, September 18, Subtropical Storm Alpha formed near the coast of Portugal, marking the first storm of the Greek alphabet -- and the 22nd named storm of the Atlantic hurricane season.

The short-lived storm was the first system to be named using a letter from the Greek alphabet since 2005.

WHY DID THIS HAPPEN?

According to the World Meteorological Organization (WMO), the names designated to Atlantic storms are chosen years in advance.

Names are alphabetical, starting with A every season. The letters Q, U, X, Y, and Z are omitted due to low availability of Euro-centric names starting with those letters.

If all the names assigned to a given season are used, the solution is simple: Forecasters switch to another alphabet. 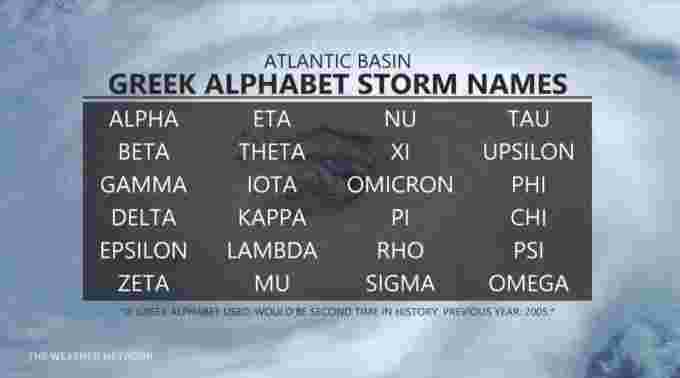 There were six Greek-named storms in 2005, starting with Alpha on October 22 and ending with Zeta on December 30.

4. STORMS CONNECTED BY A COLD FRONT

Beautiful connection by a cold front between Hurricane #Teddy and Tropical Depression Beta over Texas. pic.twitter.com/6rfIZiiw1Y

On September 22, radar images captured a large cold front in the Atlantic, essentially 'tethering' Hurriane Teddy and Tropical Depression Beta together as they churned over Texas and Atlantic Canada, respectively.

"As the cold air spread outward into the Caribbean, this cold front connected Teddy to Tropical Depression Beta, thousands of kilometres away, in Texas."

There are a lot of hidden hazards in floodwater -- debris, bacteria, and downed powerlines among them -- but here's one you might not consider.

Fire ants. Lots of them.

Officials in League City, Texas released a video on September 22, showing floating piles of fire ants in a local park as the area dealt with flooding from Tropical Storm Beta.

This is one of the reasons why you should avoid walking through flood water. Floating ant piles-like this one found at Countryside Park-can form and be very dangerous. pic.twitter.com/NhqTLRwFs8

Now, to be clear: While surprising, floating piles of fire ants isn't uncommon. They were also seen in Texas 2017 after Hurricane Harvey dropped trillions of gallons of water on parts of the state.

“Fire ants are capable of building what we call ‘self-aggregations,’” David Hu, biomechanics researcher at Georgia Tech, told the Smithsonian in 2013.

“They can build little boats, little houses called bivouacs and even bridges to cross streams by being the building material, linking their bodies together and forming strong networks.”

Here's a pro tip: If you ever see a fire ant -- or land or floating in the water -- it's best to stay away. The invasive species packs a painful sting that feels like, you guessed it: fire.