Thursday, May 17, 2018, 12:23 - While much of the Southwest U.S. and portions of northwest Mexico continue to experience extreme to exceptional drought, those managing and consuming water resources in the region keep their fingers crossed for a plentiful Summer Monsoon season. July and August are the main months when large thunderstorms roll across the Southwest U.S. and Northwest Mexico, bringing most of the precipitation accounted for during the year. This monsoon-type circulation accounts for at least half of the total precipitation received in Arizona and New Mexico every year.

Two main synoptic features drive the Southwest Monsoon; a thermal low developed by intense daytime heating over the deserts of the Southwest and Northwestern Mexico, and an upper-level high pressure ridge normally located east of this low. With this pressure pattern set-up, moisture from both the Gulfs of Mexico and California flows into the region, which in conjunction with the local orography can lead to vertical cloud development. The evening and nighttime thunderstorms are capable of producing spotty but intense precipitation accompanied by an incredible lighting display.

For some, the monsoon is a period of relief as it suppresses much of the intense summer heat that affects the deserts of the Southwest. It also replenishes water resources in the region and nourishes the vegetation. The other side of the coin is that this hit and miss type of precipitation can also be dangerous, causing frequent flash flooding, crop-damaging hail and intense gusty winds with occasional dust storms in the Four Corner states.

During the monsoon months, another important phenomenon associated with the frantic thunderstorm activity is lightning. In the Southwest, lightning on average ignited more than 2,300 fires annually since 2001, burning close to 277,000 acres per year. 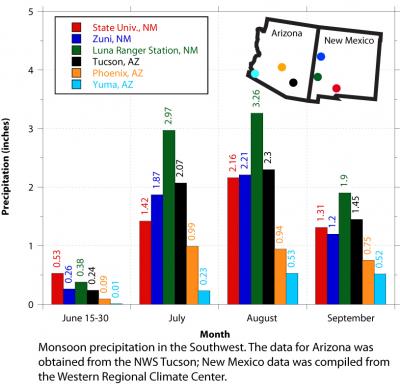 How will this year's El Niño affect the Southwest Monsoon?

How strong and effective the North American Monsoon is on a year-to-year basis depends greatly on complex interactions between the Pacific and Atlantic Oceans, the North American continent, and the atmosphere. As of May 2018, most computer models agree that a weak El Niño (0.5 to 1.0 oC) could form during the summer and continue to gradually intensify later in the fall. But the complex interaction between synoptic and mesoscale mechanisms can overshadow the larger scale El Niño signal, especially when it is a weak one as expected in 2018.

The main effect of El Niño on the quality of the summer monsoon rains appears to be related to the moisture availability and transport into the region. Research connecting the onset of the Southwest Monsoon and El Niño suggests that - only during strong El Niño events - the subtropical ridge struggles to form early on, and delays the onset of the season. With the ongoing transition between a now-gone La Niña and an emerging El Niño, near neutral conditions would imply a near normal North American Monsoon season this year. 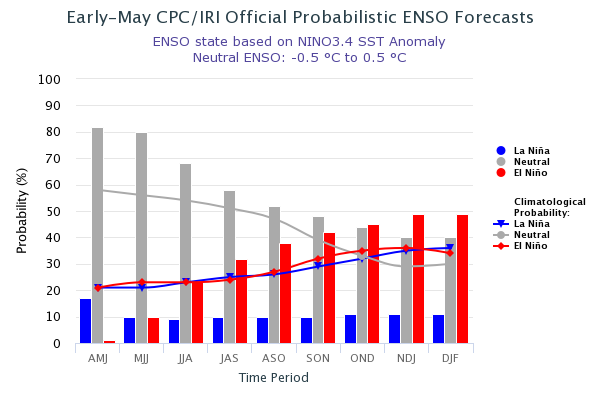 It is also relevant to follow-up and on the activity of the Madden-Julian Oscillation (MJO) during the summer months, as it can also influence the impact of the El Niño phenomenon when present in the Pacific.

The MJO is an atmospheric disturbance that modulates tropical patterns of atmospheric circulation and thus precipitation. It has a pronounced effect on the winter-time jet stream, the upper-level winds that drive storms among other areas into the west coast, but it can also significantly influence regions that experience rainy seasons during the summer. 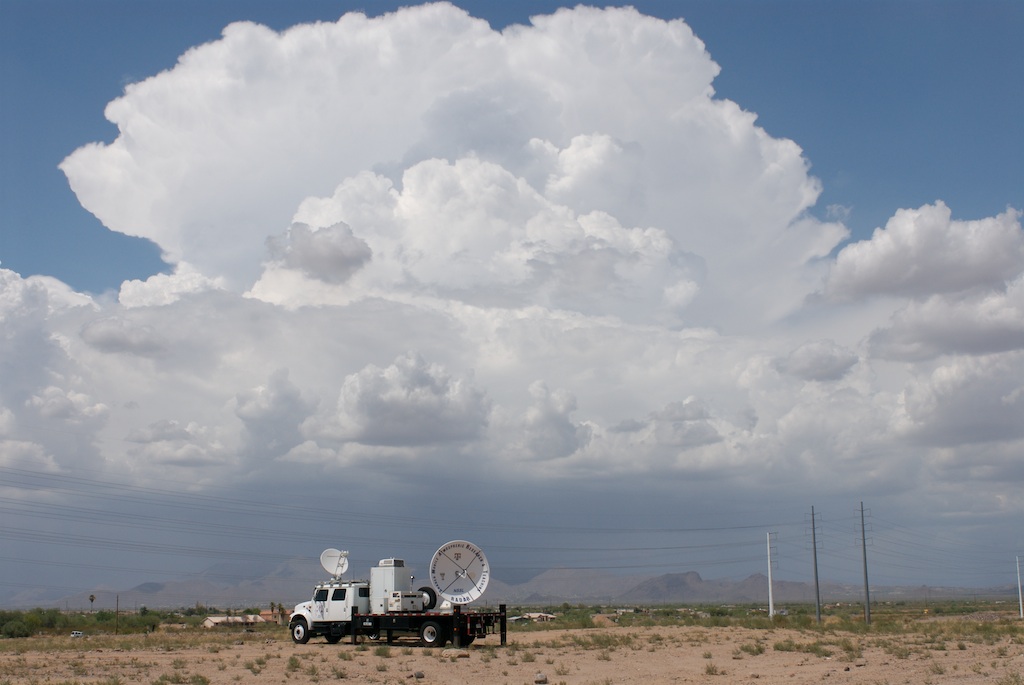 The MJO can also have a tremendous impact on tropical cyclones in the region, mainly between May and November, either enhancing or suppressing the activity within that period.

Later in this spring it will be essential to know how this disturbance is shaping up, in order to better forecast how it could affect the coming rains. A complete cycle from enhanced precipitation to suppressed precipitation takes place over 30 to 60 days, on average, when the MJO is active.

Must see: Time lapse of the monsoon season in Mexico