With science under siege in 2017, scientists fought back

Saturday, December 30, 2017, 19:16 - 2017 may well be remembered as the year of alternative facts and fake news. Truth took a hit, and experts seemed to lose the public’s trust. Scientists felt under siege as the Trump administration purged information from government websites, appointed inexperienced or adversarial individuals to science-related posts and left important advisory positions empty. Researchers braced for cuts to federally funded science.

So where did that leave science and its supporters? Here we spotlight five stories from our archive that show how scholars took stock of where scientists stand in this new climate and various ways to consider the value their research holds for society.

1. A risk to standing up for science

In April, the March for Science mobilized more than a million protesters worldwide to push back against what they saw as attacks on science and evidence-based policy. But some people in the research community worried about a downside to scientists being perceived as advocates.

Maintaining that trust is imperative for scientists, both to be able to communicate public risks appropriately and to preserve public funding for research, she wrote.

Vraga and her colleagues’ research suggests that scientists don’t lose credibility when they advocate for policies based on their expertise. But there’s a distinction to be made between advocacy and mere partisanship – statements motivated by the science are received differently than if they’re perceived as driven by political beliefs.

(Related: Our favorite signs from Earth Day's 'March for Science')

2. Rhetorical tools at the ready

With the feeling that there’s a “war on science” afoot, savvy scientists are thinking about how to defend their work. University of Washington professor of communication Leah Ceccarelli says they can look toward the field of rhetoric for help in how to get their messages across. She writes:

“Before dismissing this recommendation as a perverse appeal to slink into the mud or take up the corrupted weapons of the enemy, keep in mind that in academia, ‘rhetoric’ does not mean rank falsehoods, or mere words over substance.” 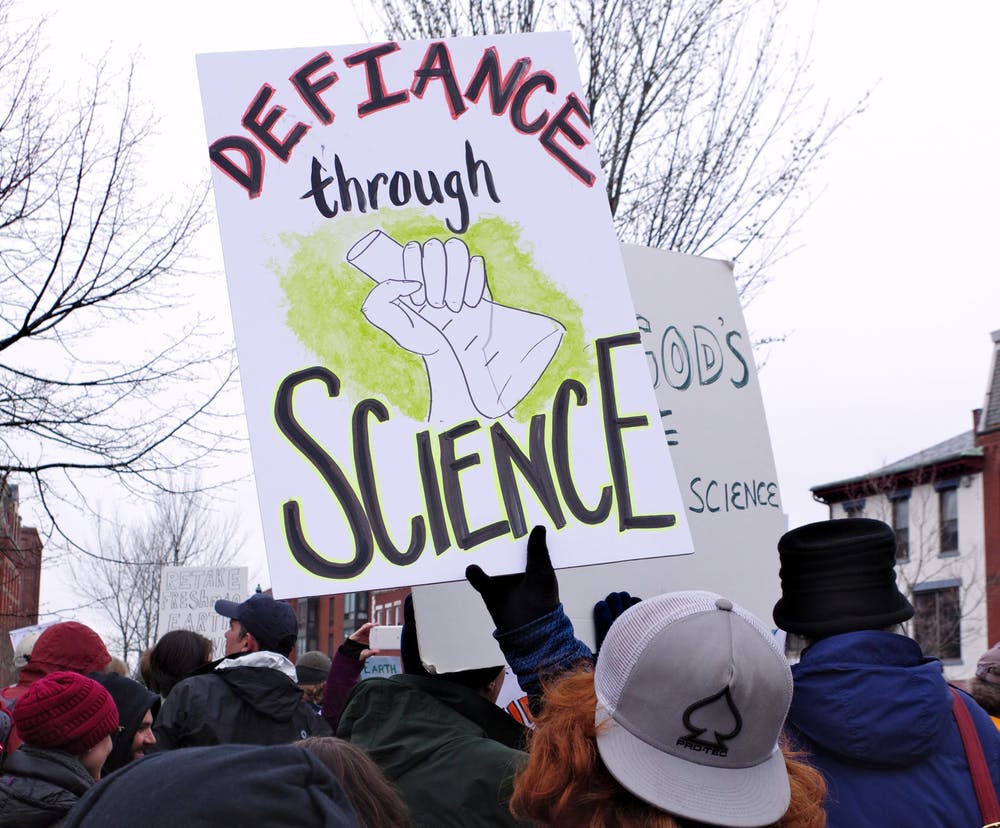 Protesting is one thing, communicating a message is another. Peter Cedric Rock Smith, CC BY-NC-ND

Indeed, the science of science communication is becoming a hot area of inquiry, as practitioners investigate and disseminate various techniques for effectively spreading accurate scientific information.

3. What you miss out on when science gets cut

Scientists are always scrambling to secure funding for their research, and during the first year of the Trump administration, it seemed science projects were consistently on the budget chopping block.

Christopher Keane, the vice president for research at Washington State University, made the case that federal funding for science ultimately revs up regional economies, particularly when scholars within academia join forces with entrepreneurs in the private sector:

“Thousands of companies can trace their roots to federally funded university research. And since the majority of federally funded research takes place at America’s research universities – often in concert with federal labs and private research partners – these spinoff companies are often located in their local communities all across the country.”

Ohio State University economist Bruce Weinberg described how a unique data set allowed him and his colleagues to actually follow the money on federally funded scientific research. Using administrative data, they were able to identify everyone paid to work on a research project, not just the few who appear as authors on any culminating journal articles.

“This is valuable because we’re able to identify students and staff, who may be less likely to author papers than faculty and postdocs but who turn out to be an important part of the workforce on funded research projects. It’s like taking into account everyone who works in a particular store, not just the manager and owner.”

The majority of people employed on research projects turn out to be somewhere in the training pipeline, whether undergraduates, graduate students or postdocs.

And to do all that work, Weinberg points out, labs need to purchase everything from “computers and software, to reagents, medical imaging equipment or telescopes, even to lab mice and rats.” Cut the federal funding for science and the economic effects will ripple out far beyond just university science buildings.

Skeptics may wonder: What’s the big deal? So we take a few years off from funding some basic research. Does basic research really matter? As Northwestern University’s Benjamin F. Jones and Mohammad Ahmadpoor put it, the:

“‘ivory tower’ view of academic endeavors suggests that science is an isolated activity that rarely pays off in practical application. Related is the idea that marketplace innovation rarely relies on the work of universities or government labs.”

But is that right? To find out if basic research actually does lead to usable practical advances, they designed a study to investigate the links between patentable inventions and scientific research. Jones and Ahmadpoor created a “social network” style map, which connects patents and science papers using the reference citations in each. They found that:

It’s impossible to predict which basic research projects will be important in the marketplace, but they wrote that a very high share of scientific research does link “forward to usable practical advances. Most of the linkages are indirect, showing the manifold and unexpected ways” in which basic research can ultimately pay off.

Watch below: John Ratzenberger explains the Science Behind Air Travel