News
Editor's Choice
Check for weather alerts in your city, here
OUT OF THIS WORLD | What's Up In Climate Change - a glance at the most important news about our warming world

Despite La Niña, 2017 was one of the hottest years on record

Friday, January 19, 2018, 8:52 - 2017 has now taken its place as one of the top three hottest years on record, despite the lack of any help from El Niño and even with a slight cooling influence from La Niña in place, thus providing even stronger evidence that our planet is rapidly warming due to human activities.

The official word is in on 2017 global temperatures, from both NOAA and NASA.

In a Thursday morning joint teleconference, the two agencies revealed their independent conclusions, after tallying global temperatures during last year, and comparing those tallies to all years going back to 1880.

The Year-to-Date tally of 2017, compared to the eight other warmest years since 1880. Credit: NOAA

The differences between these records is due to the differences in temperature measurement coverage of the two agencies, and the statistical methods they use to compute the averages. However, even though these records vary from one another by a few hundredths of a degree, both agencies show the same long-term trend of temperature rise.

These final tallies verify with the forecast from last year, as it became more and more clear that 2017 was not likely to beat out 2016, with its influence from a very strong El Niño, but it would certainly provide a serious challenge to 2015's spot on the list of hottest years on record.

Given that temperatures over the United States and Canada have been brutally cold so far this winter, it may be difficult to believe that 2017 still comes in as the 2nd or 3rd hottest year since the start of the Industrial Revolution. However, as the animation below shows, the cold here was vastly overwhelmed by the warming elsewhere in the world.

ENSO is the El Nino Southern Oscillation, the back and forth shifts between El Nino, La Nina and "normal" patterns of tempertures across the equatorial Pacific Ocean. This cycle has an influence on global temperatures, with El Niño bumping temperatures up and La Niña tamping them down, and how much depends on how strong the pattern is. We saw the influence of the El Nino during 2015 and 2016, as NASA determined it added 0.07oF to 2015's overall temperature average, and 0.22oF to 2016's average.

What's truly remarkable about 2017? It ranked as high as it did in the records even without the influence of an El Niño, and with a slight cooling influence in place due to the weak La Niña patterns that both started and ended the year.

To emphasize this, NASA climate scientist Gavin Schmidt presented an analysis that separated out the influence of El Niño and La Niña throughout the years. The analysis shows that if there had not been a 'super' El Niño in 2015 and 2016, those two years would have still ranked as #2 and #1 in the record books, respectively, as of the end of 2016. However, 2017 would have topped both of them, to become the new hottest year on record. 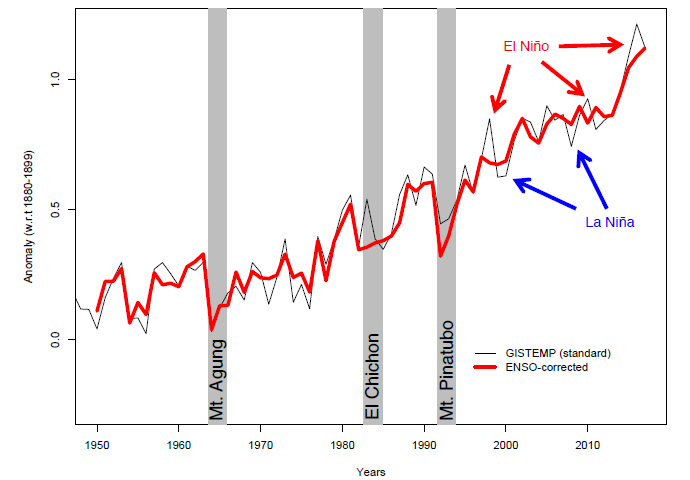 So, while the final tallies of the temperature records may put 2017 as the 2nd or 3rd hottest year on record, that - in no way - indicates that global warming is having any less of an impact. In fact, when we filter out the natural influences, we see just how strong the unnatural influences really are, and it becomes even easier to see how human activities are impacting the planet.

Watch Below: Watch 137 years of global warming in under 40 seconds!