Expired News - New Pluto discoveries revealed Friday. Check them out here - The Weather Network
We use cookies on this site to improve your experience as explained in our Cookie Policy. You can reject cookies by changing your browser settings.   READ MORE I ACCEPT

Friday, July 24, 2015, 1:30 PM - NASA's New Horizons spacecraft flew past Pluto on Tuesday, July 14, returning amazing images and discoveries from this tiny, distant world that are sure to wow us for years to come.

Check out our collection of the best images and discoveries from Pluto so far, and read on here for updates on announcements and the mission briefings.

On Friday, July 24, at 2 p.m. ET, the New Horizons science team gathered to reveal the latest images retrieved from the spacecraft and to show off the latest results from their analysis of what they've seen so far. See the amazing images from the mission and watch below for the full NASA TV briefing. 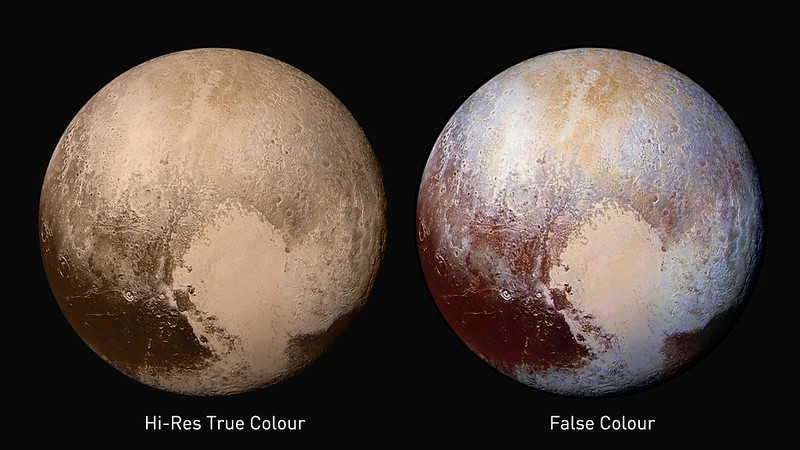 This latest images of Pluto, released on July 24, 2015, showing the dwarf planet in amazing high resolution true colour and in false colour to bring out more details. Credit: NASA/JHUAPL/SWRI

On Friday, July 17, at 1 p.m. ET, the New Horizons team gathered with members of the press at NASA Headquarters, in Washington, D.C., to reveal more of what their spacecraft witnessed as it flew through the Pluto system.

Astronomers from the Slooh Community Observatory weighed in

At 5:30 p.m. ET, Wednesday, July 15, Slooh host Eric Edelman was joined by astronomer Bob Berman to discuss what we've seen so far from New Horizons, and astronomer Will Gater speaks to a mission team member about what may be to come from the data being sent back by the spacecraft.

Check out NASA's briefing from 3 p.m. ET that afternoon, as they presented a detailed look at the surfaces of Pluto and Charon, our very first look at Pluto's outermost moon, Hydra, and some very surprising new information about these distant worlds.

New Horizons was far too busy taking images and gathering science Tuesday, and thus couldn't send signals back to Earth while it was preoccupied with Pluto and its moons. Just after 9 p.m. ET Tuesday, the "Phone Home" signal it sent four and a half hours earlier arrived, as planned, to inform the mission team that it safely passed through the Pluto system and it was ready to start sending back the data it gathered.

Now securely past Pluto and headed deeper into space, New Horizons has been transmitting back the first batches of data it collected, which are arriving back here on Earth in five "First Looks" - A through E.

Stay tuned for more to come, as the incredible findings presented on Wednesday were only from the very first of those blocks of data.

With the spacecraft busy and out of radio contact for much of its operations on Tuesday, the mission team was forced to wait until very late in the day before they received word that New Horizons had survived its encounter with Pluto.

Watch below as the team receives a congratulatory message from a science celebrity, they discuss the mission so far, and then get the first post-encounter message from their distant charge - at just before 9 p.m. ET.

Then continue on into the briefing that followed just half an hour later, where the team expressed their excitement, joy and relief at a successful mission. They did it!

The morning of Tuesday, July 14 brought with it our best look at Pluto yet

On its final run through the Pluto system, New Horizons took the time late on Monday, July 13 to send a batch of data and images back to Earth, just to wet our appetite for what was to arrive in the days to come.

Watch as the New Horizons team reveals the stunning pre-encounter image, and relates their impressions of this game-changing look at Pluto.

RELATED: See the latest and best results from the flyby so far